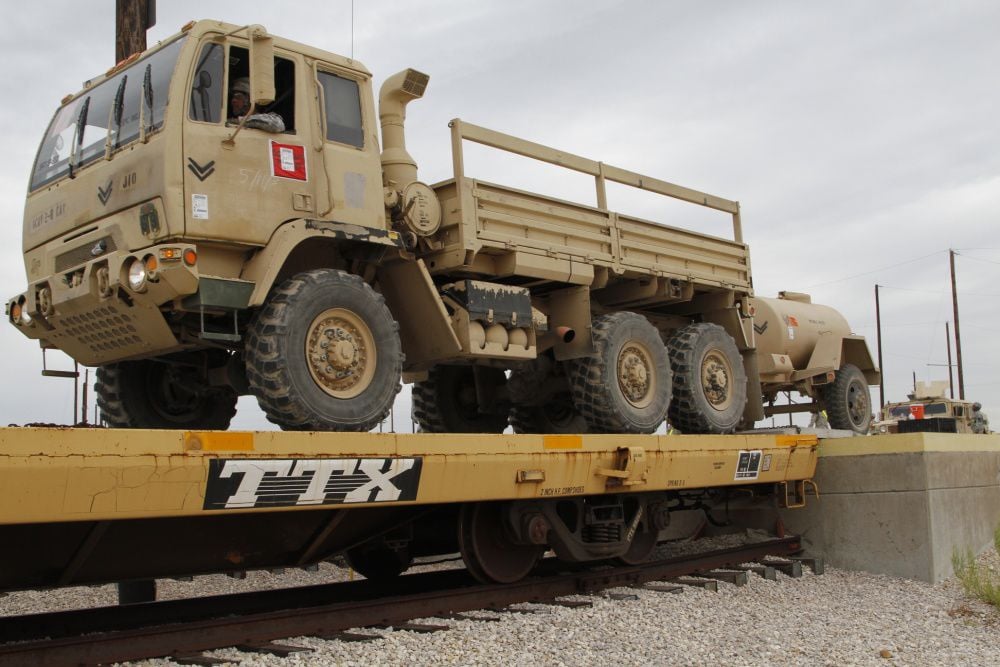 An Army truck known as a Light Medium Tactical Vehicle or LMTV is seen being loaded onto a railcar at Fort Hood in 2014.

An Army truck known as a Light Medium Tactical Vehicle or LMTV is seen being loaded onto a railcar at Fort Hood in 2014.

The investigation of the June 2, 2016, Army truck crash at Fort Hood — which claimed the lives of eight soldiers and a West Point cadet — placed much of the blame for the accident on the staff sergeant in charge in the transport convoy, according to a report in the Dallas Morning News this week.

The investigation, according to the Morning News, blames the accident on a series of three successive decisions made by Staff Sgt. Miguel Angel Colonvazquez, a combat veteran who also drowned when the Army truck he and the others were in overturned into Fort Hood’s Owl Creek during a flash flood.

Colonvazquez, 38, from Brooklyn, N.Y., was an experienced noncommissioned officer who had extensive driving time in various Army trucks and who had led tactical convoys after entering active-duty service in July 2003, according to the investigation.

The investigation report was given to the Dallas Morning News by San Angelo resident Ricky DeLeon, the father of Pvt. Isaac Lee DeLeon, one of the soldiers who was also killed in the accident.

Neither the Army nor the 1st Cavalry Division has released the accident investigation. The Herald requested copies of the report months ago.

The report placed the lion’s share of blame on Colonvasquez, according to the Morning News, but it also recommended that three leaders associated with the unit receive General Office Memorandum of Reprimand for negligence of duties. Those leaders, whose names were blacked out in the report, were not with the convoy when the accident occurred because it was considered “Sergeant’s Time Training,” a chance for senior sergeants to do practical, hands-on training with junior enlisted soldiers.

The investigation cited the three leaders for not doing more ahead of time to reduce the risks to the patrol considering the weather conditions and the inexperience of the young soldiers, according to the Morning News.

“Our son Isaac is dead because of irresponsibility. It was a bad situation where they never should have been out there,” Ricky DeLeon told the Morning News.

The father said the entire leadership of Fort Hood should bear responsibility for his child’s death.

Former platoon sergeant was on leave during the rollover accident, yet found at fault

Then-Sgt. 1st Class Caroline Hawkins Blaze was home on military leave, June 2, 2016, when she received a phone call informing her a training a…

IMO all training maneuvers that day should of been halted. Every low water crossing in the Bell County area was flooded. I remember that day well. There is no reason on Earth troops should of been running around out there period.

That's bullshit!! When family threatens the military they want to blame one of the victims because they CAN'T speak for themselves!! Are you freaken serious?? OK, since they are looking into deaths of soldiers... what really happened to my sister??? Tell your lawyer that I have a case for him too! That's the reason for my petition! How dare they go after those who can't stand up for themselves! F$%k that, I'm fighting with you! I'm fighting with/for any family that has questions about the death of their loved one! We are STILL waiting for answers about my sister's death and I've gotten so much insight to it, without the military's assistance!! Let me know how I can help! We need to be heard, we need to be helped! Your husband is a hero! Fu%$ what they say just so family won't blame them!!

Why can't they put the blame where the blame belongs. To Blame a SSG for this is just sick. Instead of shit rolling down hill on this one, it should be rolling uphill.

I agree with you, Dr. Strangelove. Sure is easy to blame the highest ranking individual who died in this tragic event.

This guy was a Staff Sgt he was not a Senior NCO. Sergeant Time is just not for Senior NCOs it’s for all NCOs. This so looks like an Army Cover Up to me?