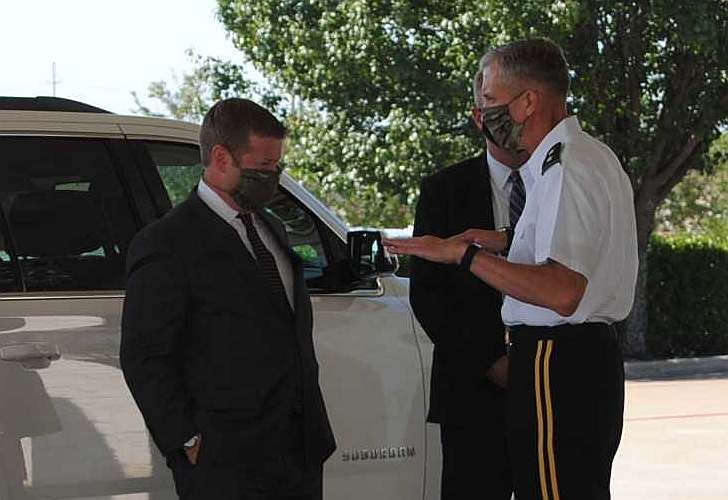 Ryan McCarthy, the secretary of the Army, speaks with Maj. Gen. Scott Efflandt, the III Corps and Fort Hood deputy commander, upon his arrival at the Killeen Civic and Conference Center on Thursday morning. 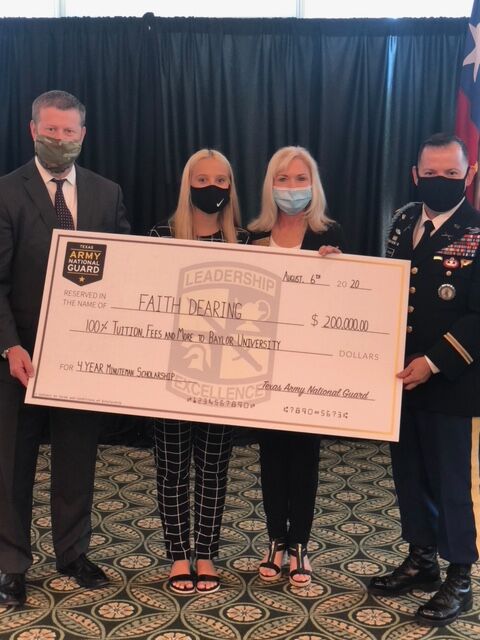 Faith Dearing, an Ellison High School graduate, stands next to Jean Shine, civilian aide to the secretary of the Army during a scholarship presentation Thursday morning at the Killeen Civic and Conference Center. The oversized check, representing a four-year scholarship to Baylor University, was presented to Dearing during a community meeting with the Secretary of the Army Ryan McCarthy, at left. Dearing joined the Army National Guard last fall. Also pictured is Maj. Jason Cordaway, a National Guard recruiter.

Ryan McCarthy, the secretary of the Army, speaks with Maj. Gen. Scott Efflandt, the III Corps and Fort Hood deputy commander, upon his arrival at the Killeen Civic and Conference Center on Thursday morning.

Faith Dearing, an Ellison High School graduate, stands next to Jean Shine, civilian aide to the secretary of the Army during a scholarship presentation Thursday morning at the Killeen Civic and Conference Center. The oversized check, representing a four-year scholarship to Baylor University, was presented to Dearing during a community meeting with the Secretary of the Army Ryan McCarthy, at left. Dearing joined the Army National Guard last fall. Also pictured is Maj. Jason Cordaway, a National Guard recruiter.

While many expressed their support and stressed the importance of Fort Hood to the Killeen area, local community leaders and activists also asked about the Army’s sexual harassment and assault prevention program, Fort Hood’s involvement with local schools and even possible psychological evaluations for soldiers during invitation-only meetings with the Secretary of the Army in Killeen Wednesday and Thursday.

Army Secretary Ryan McCarthy was “very genuine” and “sincere” when he met with community members for about 90 minutes inside the Killeen Civic and Conference Center Thursday morning, said AnaLuisa Tapia, a local resident who was at meeting and has helped organize weekly protests in front of Fort Hood in the wake of the death of Fort Hood Spc. Vanessa Guillen.

“It’s one thing to tell me there’s a problem, but another to say how they will fix it,” Tapia said, adding that various community members took turns speaking at the meeting, commenting on Fort Hood’s relationship with the community, and asking questions to the secretary.

Tapia is a district director for League of United Latin American Citizens, or LULAC. Leaders from local groups, including the NAACP, elected officials and city department heads also attended.

Longtime Realtor and civic leader Jean Shine, who is civilian aide to the secretary of the Army for the Killeen-Fort Hood area, said McCarthy held three sessions with community members — two on Wednesday and one on Thursday — all at the conference center.

“Everyone said — bar none — our community and our post are getting a bad rap,” said Shine, referring to mainstream media attention that has focused on the Guillen cases and protests associated with it.

“We will do anything we can to support Fort Hood,” Shine said. “We love Fort Hood.”

Known as the #IAmVanessaGuillen bill, McCarthy said during a news conference at Fort Hood later Thursday that the Army is working with authorities to understand the specifics of what the bill would entail. He declined to say whether he specifically supports the bill.

Tapia said the bill was not mentioned at the Killeen meeting until she brought it up.

“And I was the second to last to speak,” she said, adding about 50 people attended the meeting, some in Army uniforms. At all three meetings combined, Shine estimated about 60 to 70 community members attended. Army officials did not allow the Herald or other media to attend the meetings, saying they wanted “candid” conversations.

Tapia said McCarthy did not say during the meeting he would support the bill, but she hopes he will.

“I asked everyone in that room to support that, as well,” she said.

Tapia said other people at the meeting asked about the Army’s sexual harassment and assault prevention program, Fort Hood’s involvement with local schools and possible psychological evaluations for soldiers.

McCarthy was in Killeen and Fort Hood Wednesday and Thursday to speak with Fort Hood officials, local government and civic leaders about Fort Hood, which has faced heavy criticism in recent months after the death of Guillen drew nationwide attention.

“The world is a complex and dangerous place,” McCarthy said in a statement. “We need our community leaders more than ever right now to support the Army.”

“Civic leaders expressed a desire to work with the Army to communicate why Fort Hood is a great place to be assigned. Examples included community engagements with civic sponsored events for soldiers and military families, town hall meetings, and community outreach programs for the Fort Hood surrounding areas,” according to the statement.

McCarthy ordered an independent review in July to determine whether the command climate and culture at Fort Hood, and the surrounding military community, reflects the Army’s values, including safety, respect, inclusiveness, a commitment to diversity and workplaces and communities free from sexual harassment. The review will be conducted by five civilian experts.

The review came about after the death of Guillen, a 3rd Cavalry regiment soldier, put a national spotlight on sexual harassment and assault in the military. Guillen’s family said she had been sexually harassed before her death, but only told her family because she was afraid to go to her chain of command.

“We need to be an institution that not only run towards the sound of gunfire, but who runs to the side of a teammate who is being sexually harassed or assaulted,” McCarthy said in the statement. “There is a way through this together.”

Guillen’s case reached the White House last week when her family met with President Donald Trump, and a bill was introduced in Congress that would allow soldiers to report sexual assault and harassment cases outside of their chain of command.

Protests have been held in Killeen and nationwide since her disappearance in April, demanding transparency from the Army and Fort Hood on what happened and for better reporting procedures on sexual assault and harassment cases.

Guillen, 20, was found dead at end of June in East Bell County after she was reported missing from Fort Hood since April 22.

Aguilar told investigators that Robinson on April 22 struck a “female soldier in the head with a hammer multiple times at his arms room, killing her on Fort Hood.”

Mayor Segarra said he wanted to stress to the Army leader that the community continues support Fort Hood soldiers.

“I expressed to the Secretary that many of us are available, if needed, to help carry the message of our community and Fort Hood if needed. He let us know that the Army is committed to working on the issues that have been brought forth with the recent tragedy of Vanessa Guillen and will find ways to prevent such tragedies in the future,” Segarra said in an email to the Herald.

“When I heard the secretary was coming, I thought what a perfect opportunity for him to meet some of the best and brightest going into the military,” said Shine, who helped organize the event.

It was one of four Minute Man Scholarships that Shine presents every year.

After a Killeen woman pleaded not guilty to a federal felony charge related to Army Spc. Vanessa Guillen’s murder, the court released its sche…