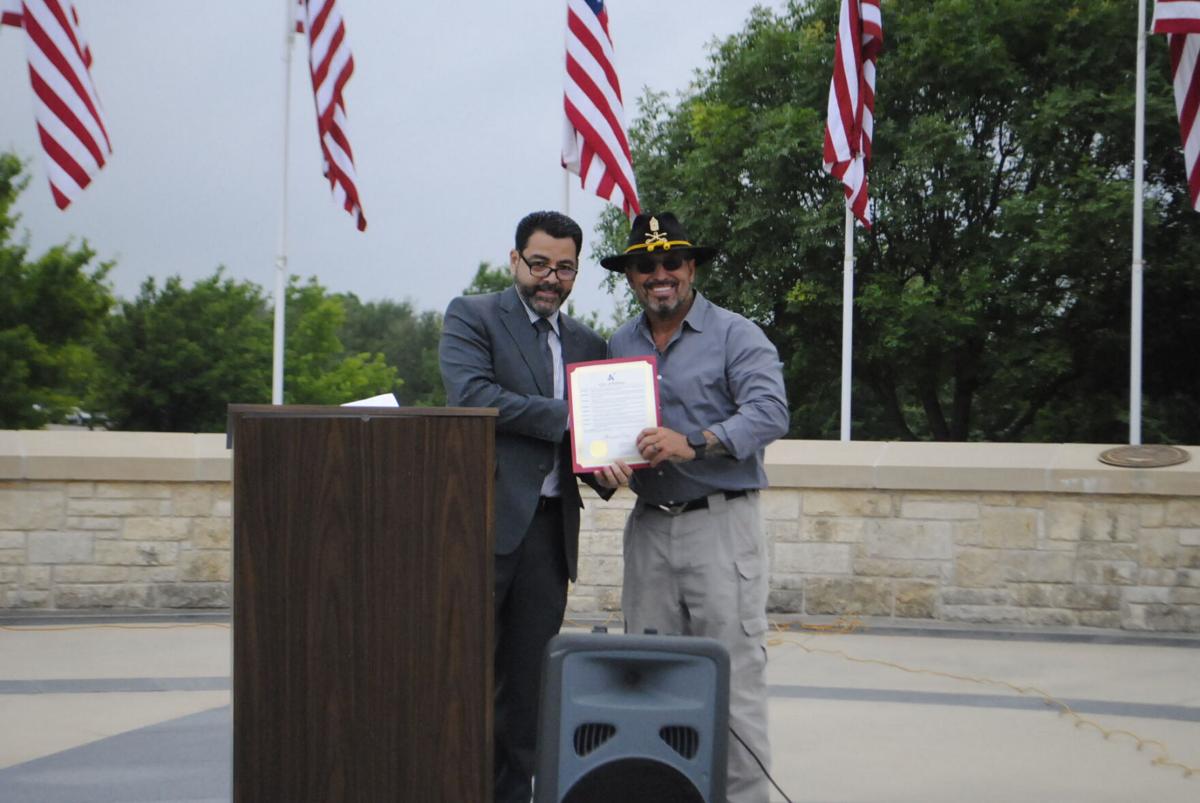 Killeen Mayor Jose Segarra presents a proclamation declaring May 31, 2021, Memorial Day in Killeen to retired Command Sgt. Maj. Lawrence "Mack" McCuller during the Memorial Day ceremony Monday at the Central Texas State Veterans Cemetery in Killeen. McCuller is the president of the Area Veterans Advisory Committee, which hosted the ceremony with the city virtually for the general public due to COVID-19. 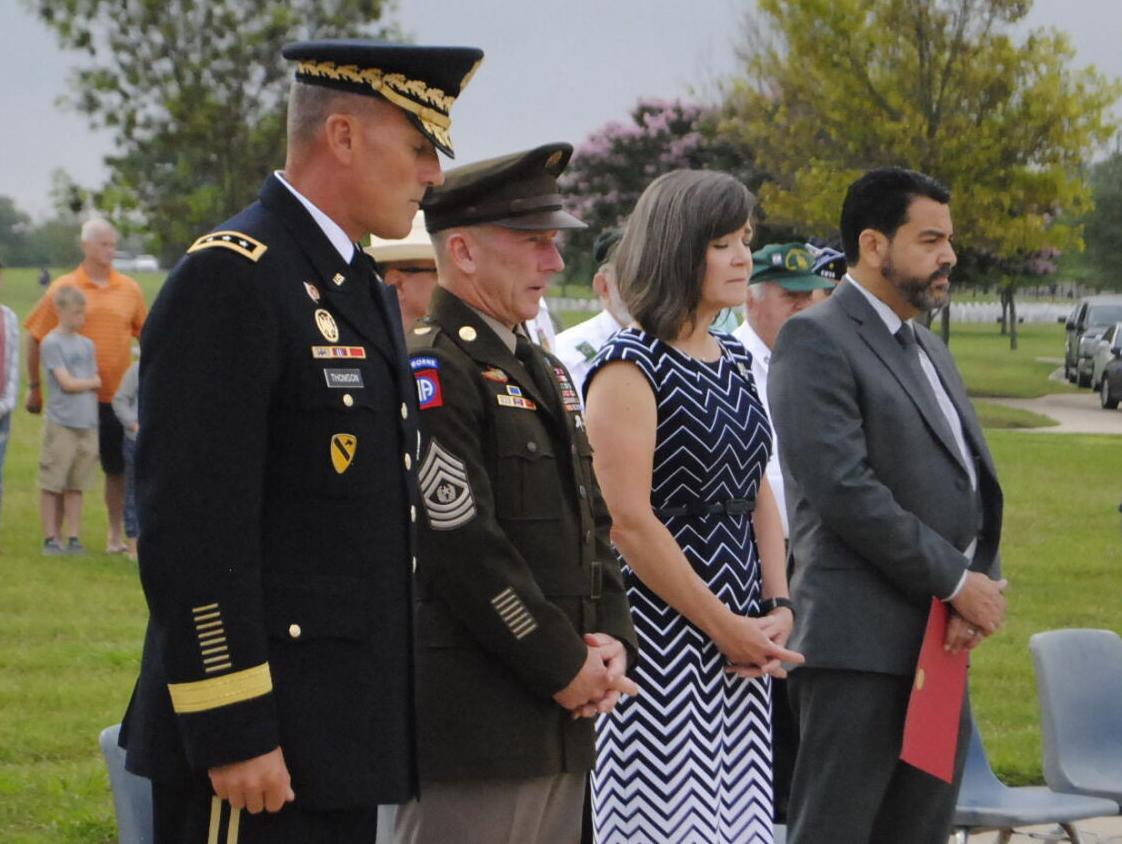 Killeen Mayor Jose Segarra presents a proclamation declaring May 31, 2021, Memorial Day in Killeen to retired Command Sgt. Maj. Lawrence "Mack" McCuller during the Memorial Day ceremony Monday at the Central Texas State Veterans Cemetery in Killeen. McCuller is the president of the Area Veterans Advisory Committee, which hosted the ceremony with the city virtually for the general public due to COVID-19.

The overcast skies lent a somber air Monday at the Central Texas State Veterans Cemetery. A light rain came down, seeming as even the heavens were mourning the loss of the American service members who gave their lives in service to their nation.

The City of Killeen and the Area Veterans Advisory Committee hosted the Memorial Day service, held virtually by Zoom and on Facebook live to help mitigate COVID-19.

Despite not being open to the public, hundreds of members of various veterans organizations, veterans and family members gathered to watch the service, many who were already at the cemetery to visit loved ones and friends buried there.

Despite the weather — and the assembled crowd — there was no chance the service would not be held, said Killeen Mayor Pro Tem Debbie Nash-King, the AVAC co-chair and an Army veteran herself.

“It is of significant importance to honor our veterans who made the ultimate sacrifice and also to honor their family members who could not be here,” Nash-King said. “My late husband, Command Sgt. Maj. Elijah King Jr., is buried right over there and I visited him this morning. So it’s very significant to me, this cemetery, not only what it means to me but to the community, that we have a place where we can come to honor our loved ones and just have that connection that they are not forgotten.”

Killeen Mayor Jose Segarra, who is also an Army veteran, read a proclamation naming May 31, 2021, as Memorial Day in Killeen.

“I encourage all of our citizens here locally, state and in the nation to honor the sacrifices that so many of our soldiers have given for the freedom that we enjoy every single day,” Segarra said.

The guest speaker for the event was retired Lt. Gen. John “J.T.” Thomson, a former 1st Cavalry Division commander at Fort Hood and former commandant at the U.S. Military Academy at West Point.

The general spoke about the history of Memorial Day and its importance to not only those who served and the Gold Star Families whose loved ones were buried at the cemetery, but for the general community to remember the price of the freedoms and liberty enjoyed by Americans.

“The Central Texas community has given so much in sacrifice, and we can’t ever forget that,” said Thomson, who retired in Killeen. “It’s not just the sheer numbers ... It’s the families you see here today, and it is our duty to honor the men and women who made that ultimate sacrifice.”

Thomson said he knew too many fallen soldiers buried at the cemetery and he often visits them, one by one.

“There is personal investment that people made in me, who are now lying here, and I owe them,” he said. “Every day is Memorial Day.”

III Corps and Fort Hood Command Sgt. Maj. Cliff Burgnoyne said it was an honor to attend the event, especially alongside Thomson, whom he has served with before overseas.

“This community really steps up and supports all of our fallen and our soldiers, throughout the Central Texas region,” Burgnoyne said. “It’s just amazing. Thanks to the community here in Central Texas for not only supporting Fort Hood, but all of our veterans.”

Burgnoyne said he wanted to give a special thank you to the Gold Star Families.

“This is a day that hurts for them — not only 365 days, but this one day is particularly hard,” he said. “We pray for them.”