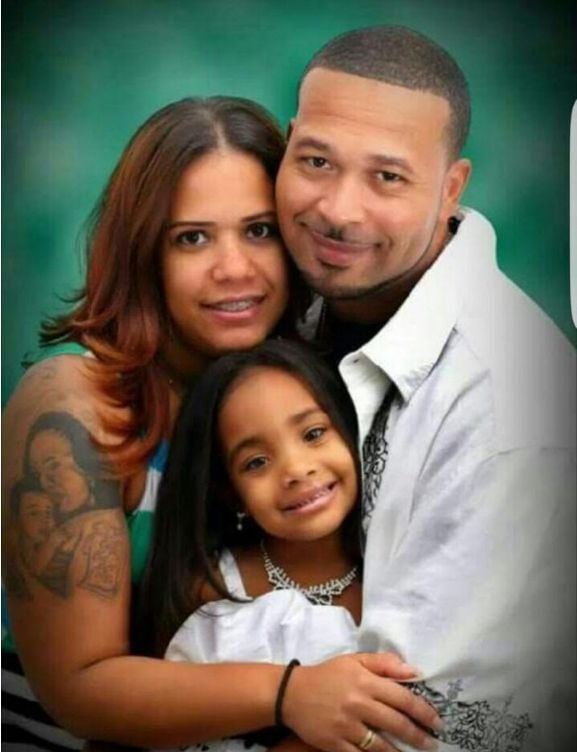 Jermaine Rogers poses for a portrait with his family. He was arrested in Kuwait in 2015 and had his death sentence reduced to life in prison Monday. 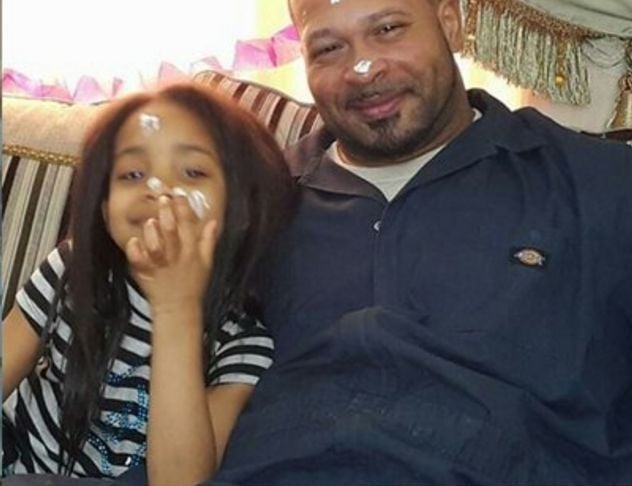 Jermaine Rogers is pictured with his fiance's daughter, Kiahuren Mateo. Rogers was in the process of adopting her before he was arrested. 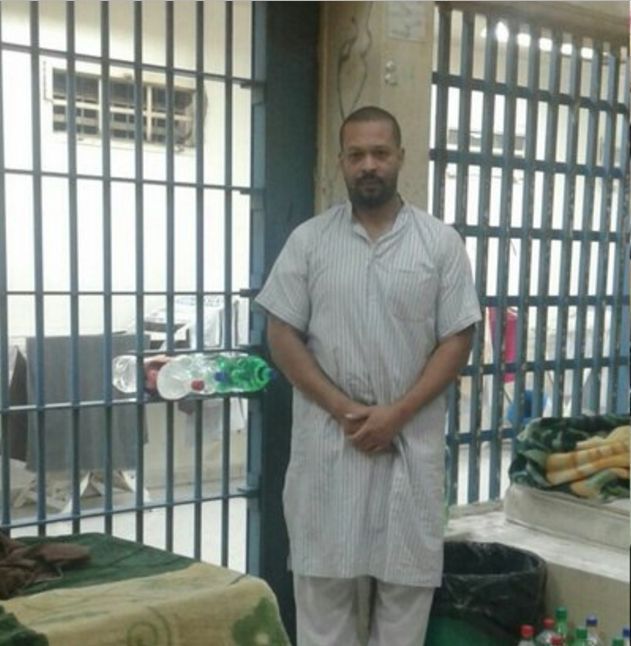 Jermaine Rogers stands in a prison cell in Kuwait, where he is sentenced to life in prison.

Jermaine Rogers poses for a portrait with his family. He was arrested in Kuwait in 2015 and had his death sentence reduced to life in prison Monday.

Jermaine Rogers is pictured with his fiance's daughter, Kiahuren Mateo. Rogers was in the process of adopting her before he was arrested.

Jermaine Rogers stands in a prison cell in Kuwait, where he is sentenced to life in prison.

Karina Mateo and her 6-year-old daughter Kiahuren used to get a phone call home from Mateo’s fiance Jermaine Rogers every Saturday. Rogers was working for General Dynamics as a contractor in Kuwait at Camp Arifjan, and had been since January 2006.

Mateo used to work there as a contractor, too, for another company, but returned to Killeen in September 2015 with Kiahuren.

In October 2015, the phone calls stopped coming. For nearly a month, Mateo had no idea whether her fiance was dead or alive.

A Kuwait police officer told her that he had been beaten to death, and was already buried. Later, she learned that Rogers was not dead, but the reality was still bleak.

On Oct. 6, 2015, Rogers was in his apartment in Mahabula, a town that sits on the Persian Gulf, when police officers carried out a search warrant at his home. That resulted in his arrest, on a charge of cocaine possession. He was held in prison for nearly a year, until he was sentenced to death by hanging on Sept. 25, 2016.

Mateo learned about all of this through a friend who still lived in Kuwait.

Jermaine Omar Rogers, 41, a Connecticut native, joined the Army in 1994. A chemical operations specialist, he served at Fort McClellan, Ala., and later spent three years in Germany before he was stationed at Fort Hood in April 2001. Rogers got out of the Army in November 2002 as a sergeant. His awards include an Army Achievement Medal, a National Defense Service Medal, an Army Good Conduct Medal and a Noncommissioned Officer’s Professional Development Ribbon. He was never deployed.

Mateo, who is also an Army veteran, met Rogers in Kuwait in 2011. Mateo was at an event with her daughter, Kiahuren, who was 1 at the time. Kiahuren ran up to Rogers with open arms, and he picked her up.

“It was love at first sight,” Mateo said. “Jermaine carried her for hours because she refused to go to anyone else, and that’s how I met him.”

On Monday, Rogers’ sentence was reduced from death by hanging to life in prison. Mateo got the news in an email from a representative in the U.S. State Department. Rogers is being represented by a lawyer who speaks only Arabic, so the language barrier has been an obstacle for Mateo to overcome.

The search warrant investigators used to get into Rogers’ apartment had the wrong address, according to an email Mateo received from the state department. A representative from the state department said in the email that Rogers’ lawyer is attacking the conviction “primarily on procedural and evidentiary grounds,” and errors made by the police and prosecution. The representative also said that Rogers’ lease shows a different address than what was shown on the search warrant.

Rogers’ lawyer told Mateo that there were 17 pieces of evidence found on Oct. 6, 2015, and none of them contained illegal drugs. Then two days later, an 18th piece of evidence showed up in the file, and it contained 7 grams of cocaine, Mateo said she learned from the lawyer. In an audio message to Mateo, the lawyer’s interpreter said he believed a bag of cocaine was planted in the police files while at the investigators’ office, she said.

Drug offenses are taken very seriously in the Middle East.

On Wednesday, the Associated Press reported that six people working at the U.S. Embassy in Kabul, Afghanistan, have been fired for using or possessing illegal drugs. Opium production is a major source of income for insurgents and the Taliban in Afghanistan, the story said.

A search by the Herald showed that Rogers has no criminal record in America, other than a misdemeanor bad check case from Bell County in 2003 that was later dismissed.

Prison conditions are poor, and as a veteran who suffers from back and kidney problems, Rogers has gotten sick on multiple occasions. Just one week ago, he told Embassy Kuwait officials that he felt ill, and believed he had been refused care.

The whole process has been filled with a lack of certainty on Mateo’s side of things. She said the state department was not aware of the arrest for about a month after she got in touch with officials. The arrest and trial have made very little noise in the American media, as only two TV news stations in Connecticut have aired stories. It has gained a bit of traction with news outlets overseas, but most don’t refer to Rogers by name, just list his circumstances.

“I was wondering if you had any updates?” she said, in the email to him. “We are getting desperate. No one seems to care about this situation except for Senator Blumenthal.”

Blumenthal, a Democrat from Rogers’ home state of Connecticut, reached out to John Kerry while he was the U.S. secretary of state. Blumenthal asked Kerry’s office to investigate and “demand fair and equitable treatment for Mr. Rogers,” according to a copy of his letter.

The office of Sen. John Cornyn, R-Texas, also confirmed that they’ve been in contact with Mateo, though an aide declined to specify what they’ve done to help.

General Dynamics refused to answer questions the Herald asked, including whether its employees had experienced similar cases to Rogers in the past, or if they had done anything to help the former employee. Mateo said Rogers worked for General Dynamics for 14 years.

“As a company, we do not comment on personal matters involving current or former employees,” said Doug Stone, a company spokesman.

In the meantime, Rogers remains in a Kuwaiti prison with a life sentence.

How right you are.
I, also, am not stating this guy is guilty or not guilty.
But sure makes you wonder, if he is not guilty, why his company and our politicians haven't done more to pressure Kuwait.
Just where did the writer of this article receive his information - from the fiance?

Those companies are not going to risk multi-million contracts to stand up for a lone worker. The US is not going to risk ruining diplomatic relations w/a foreign country to help a lone US worker. It's scary.......you're basically on your own when you take those contracting jobs overseas. People need to realize this.

I am not making any judgement as to the validity of this situation but I would like to use it as a caution to American's that are used to Constitutional Rights and protections.
Having served many years in the Military and as a Government Contractor in so many Countries I've forgotten being there I witnessed the misbelief of American Citizen's believing that the laws of our U.S. applies even when out of the Country.
They don't in most cases unless the is some form of Official Status authenticated and on file with the Embassy associated to the country You are in. This "Agreement" gives certain rights and protection to foreigners covered in the document.
I will like to caution any American Citizen to follow the rules and laws of the area You are in. Don't take for granted you will be treated as if in America.
Just thinking