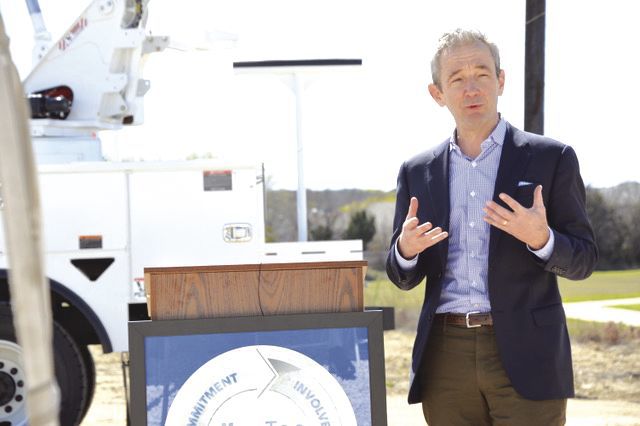 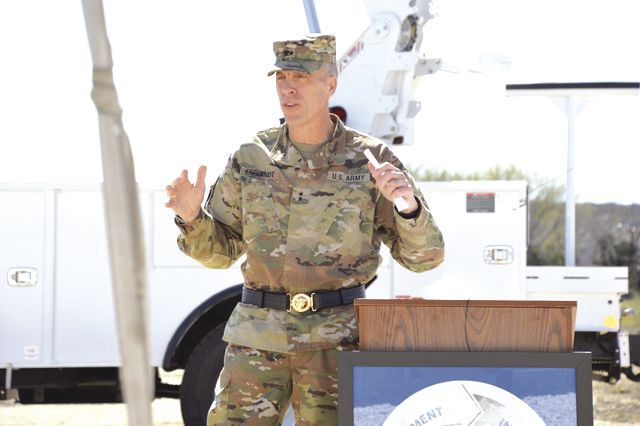 III Corps deputy commander for maneuvers Maj. Gen. Scott L. Efflandt, who was invited as the special guest of the ribbon cutting ceremony, informs to the audience about the great opportunity of the Soldier For Life – Transitioning Assistance Program Tuesday afternoon. 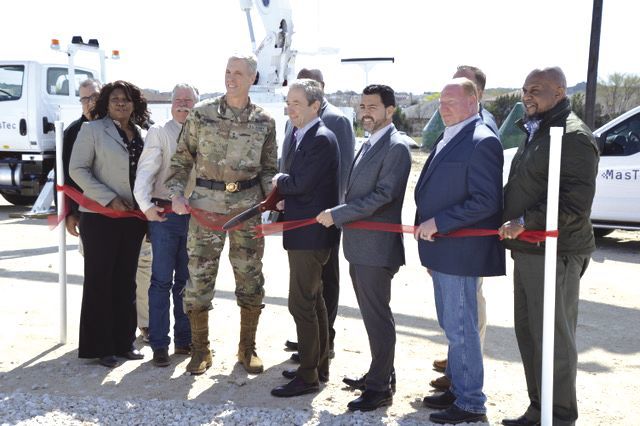 MasTec management, city officials and Fort Hood leadership cut the ribbon during the official opening ceremony of the MasTec training center in Killeen.

III Corps deputy commander for maneuvers Maj. Gen. Scott L. Efflandt, who was invited as the special guest of the ribbon cutting ceremony, informs to the audience about the great opportunity of the Soldier For Life – Transitioning Assistance Program Tuesday afternoon.

MasTec management, city officials and Fort Hood leadership cut the ribbon during the official opening ceremony of the MasTec training center in Killeen.

Fort Hood soldiers, who are transitioning out of the military, can now start a new career at the instruction company MasTec.

“This is a really big deal for us,” Higgins said. “It is a public-private partnership … with Fort Hood to support soldiers who are in transition out of the service. We enroll them in a training program that gives them some of the skills that will be required to transition in our industry and to build a career.”

The training is part of the Soldier for Life – Transition Assistance Program, that partners with industry leaders and allows soldiers who leave the military to learn a new profession.

“We respect their service and we want to continue to support them in transitioning,” Higgins said. “It can be a scary time … so this is a unique opportunity for us to step in and support them with skills development and a supportive environment that gives them a job at the end.”

Soldiers can apply for the 10-week-training in cooperation with their chain of command. Attendees who successfully finish the course can expect a position with MasTec in one of their many locations either in Texas or within the U.S.

“It is our way of giving back,” Higgins said. “And it is an opportunity for the soldiers to continue to serve their community.”

MasTec provides infrastructure development services, which include the construction and upkeep of power and gas lines. While the company counts more than 25,000 employees total, the Utility Service Group employs over 5,000.

The first group of transitioning soldiers is expected to finish their training in late April.

“We have five soldiers in the first class but we are looking to grow that,” Higgins said.

The goal is to offer at least three classes a year with 20 soldiers each.

Maj. Gen. Scott L. Efflandt, III Corps deputy commander for maneuvers, was invited as the guest of honor and happy about the new opportunity for his soldiers.

“The Army is literally served by American’s best and brightest but it is a short-term service,” he said. “And while we like to say if you give us an enlistment, we give you a lifetime of memories … we know our soldiers are ultimately going back to America’s society.”

The Soldier for Life – Transition Assistance Program, which has been in place for several years and is constantly growing, has shown great success with employment placement.

According to Efflandt, the program shows a 93% employment rate at the time participating soldiers separate from the service.

He also stated that it has placed more than 21,000 soldiers into the economy within the last five years.

“On behalf of the Fort Hood Soldier for Life – Transitioning Assistance Program, we are very proud of the work that has been going on here,” he said.

Approximately 800-900 Fort Hood soldiers transition every month from their military service into the civilian world.

While Fort Hood already partners with 21 other companies and industry leaders, Efflandt was “incredibly proud to have MasTec become the 22nd career skill program.”

Specialist Hunter Shoate is one of the first five soldiers that take part in the new MasTec training program.

“They already said I will have a career in this company once I finish the program,” he said. “I expect to progress and … have a better life for my family and make more money later on.”