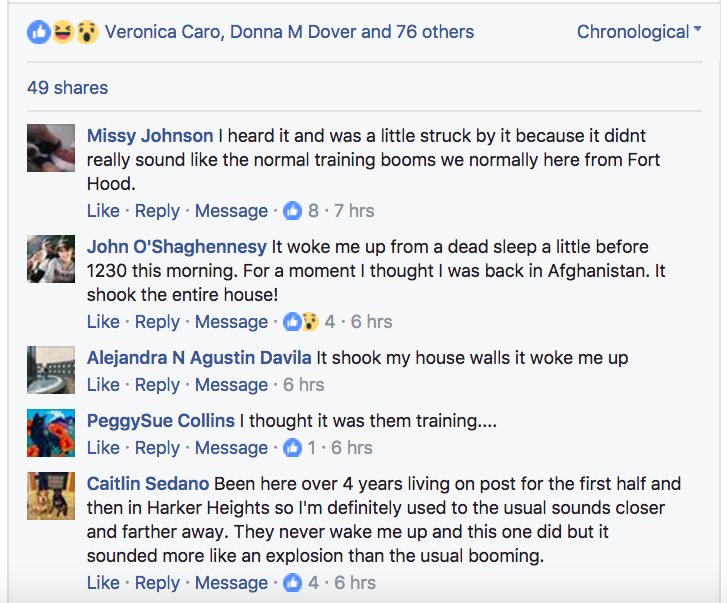 This screen shot of the Herald's Facebook shows a sample of comments made by Killeen and Fort Hood area residents about multiple loud sounds heard Wednesday, May 24, 2017, overnight into Thursday, May 25, 2017.

This screen shot of the Herald's Facebook shows a sample of comments made by Killeen and Fort Hood area residents about multiple loud sounds heard Wednesday, May 24, 2017, overnight into Thursday, May 25, 2017.

Residents in Killeen, Temple and other area towns reported hearing — and feeling — mysterious booms that seemed to carry a bigger bang than the usual sounds of Fort Hood’s live-fire training.

A Fort Hood spokesman said Thursday morning the post’s 79th Explosive Ordnance Detachment was detonating explosives overnight Wednesday; however, that particular unit was not detonating anything from 7 p.m. to midnight Wednesday — a time when residents in central Bell County reported hearing the booms.

“In Temple, our second story apartment shook from the boom at 10:30, felt almost like an earthquake, then a smaller boom was heard, more than it was felt, about 15 minutes later,” Lizzy Garcia said on the KDH Facebook page.

Another Fort Hood unit, 1st Battalion, 82nd Field Artillery Regiment, with the 1st Cavalry Division, was also training Wednesday night — firing 155mm artillery rounds. That training did go through the night, and may be the root of what people were speculating about on social media.

The barometric pressure is also at a level that carries sound waves along the ground, said Tyler Broadway, a Fort Hood media relations specialist.

Some area residents said on social media they felt their homes shake or had their windows rattled.

“I’ve lived in this area for over 30 years ... lived close to Ft Hood for most of that time,” wrote Greg Duffield on the KDH Facebook page. “I’m telling you ... nothing I’ve ever heard or experienced compares to the boom last night. And (now) I’m in southeast Temple...much further away. ... It shook the house ... I mean literally.”

In Killeen and Harker Heights, residents reported hearing the louder-than-normal-Fort-Hood-training booms after 2 a.m.

“We live in Harker Heights — around 3:30 a.m. a loud boom set off our ADT security alarm,” wrote Randi Steen Bibiano.

Broadway said training from the 79th Explosive Ordnance Detachment was complete by Thursday morning, and the training for the artillery unit concluded later Thursday.

About 80 people left comments on the KDH Facebook page Thursday concerning the booms. Some speculated the booms may have come from something other than Fort Hood, such as the SpaceX rocket-testing site in McGregor, which is north of Fort Hood. Others speculated that sounds were from space debris falling to the ground and breaking the sound barrier. Those reports were unconfirmed.

An official from the Bureau of Alcohol, Tobacco and Firearms said they received no reports of unusual explosions in Central Texas Wednesday night, and U.S. Geological Survey has not reported any seismic activity in Texas in the past week.