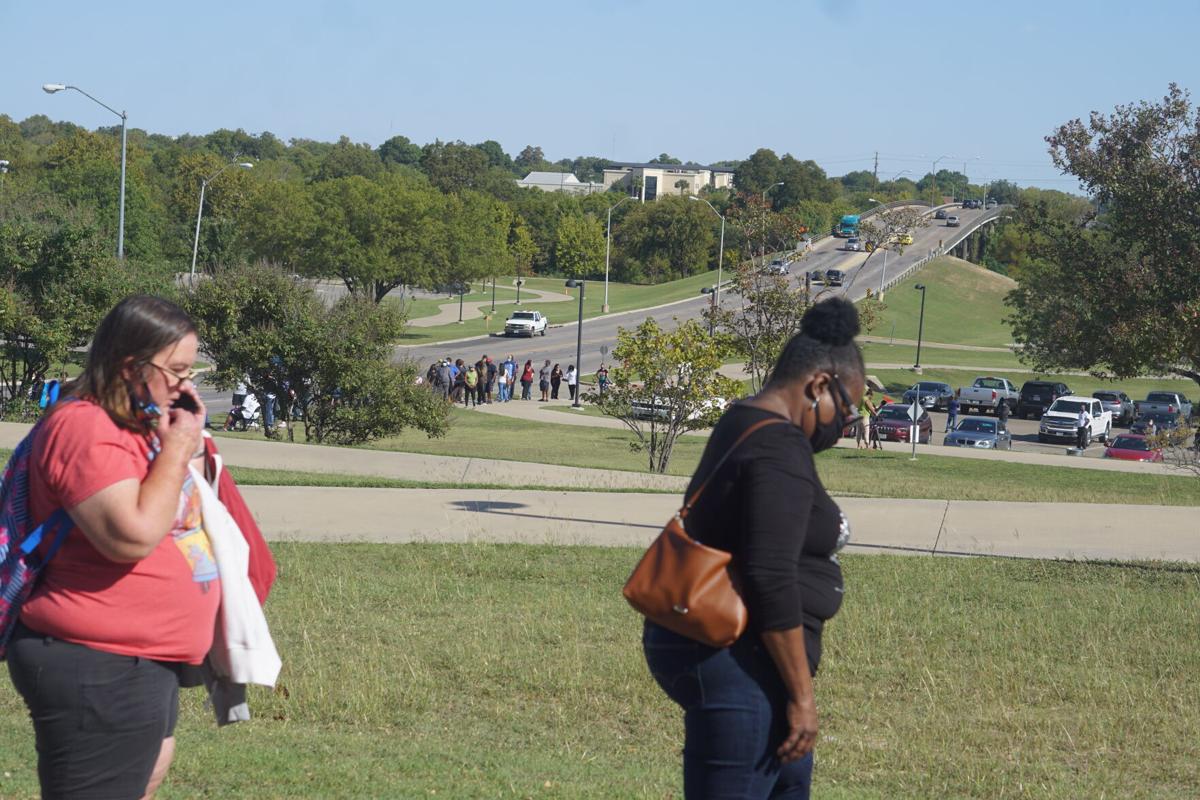 Lines to vote at the Killeen Community Center stretched all the way to a nearby baseball field on Tuesday during early voting. 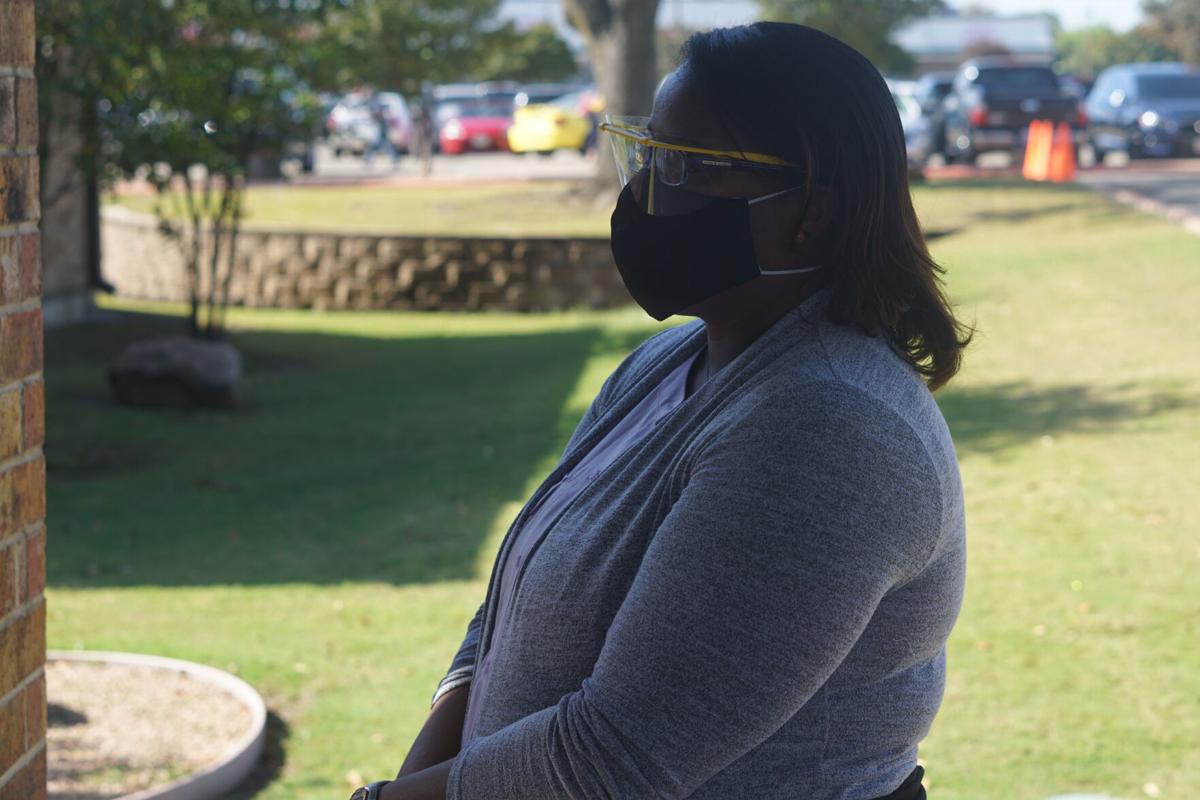 Pasha Johnson, 44, of Killeen patiently waits to cast her vote as part of early voting on Tuesday at the Killeen Community Center.

Lines to vote at the Killeen Community Center stretched all the way to a nearby baseball field on Tuesday during early voting.

Pasha Johnson, 44, of Killeen patiently waits to cast her vote as part of early voting on Tuesday at the Killeen Community Center.

Long lines didn’t stop Killeen-area residents from voting as polling locations for early voting kicked off in Texas on Tuesday.

Both of the early voting locations in Killeen had lines that extended out the doors and well into the parking lots throughout the day, as voters inside made their selections for city, county, state and national leaders in the Nov. 3 election.

The early voting location at Bell County Annex, 304 Priest Drive, had at least 200 people waiting to vote at 10 a.m. Tuesday, with the line looping around the building and into the next parking lot. Voters were camped out at 6 a.m. Tuesday morning, according to a poll worker.

Danny Johnson, a 65-year-old Killeen resident, said he waited for about three hours to vote.

“I got here about 8 a.m. this morning,” he said. “The voting process was really smooth and ran like usual for me. I read the paper, got educated and voted.”

The scene was similar at other early voting locations in Harker Heights, Temple and the Killeen Community Center, 2201 E. Veterans Memorial Blvd., where the line extended through a parking lot and to nearby baseball fields.

Many county locations still had lines of voters at 5 p.m. when the polls were scheduled to close.

This is the first presidential election Bell County has administered with its new hybrid voting machines that were put in place in 2019. The machines — which combined the ease of electronic voting with the security of a paper ballot — were used in this year’s primaries and runoffs.

Adding to the wait times, electronic poll books — which are used to verify registered voters — were functioning slowly in the morning at both Killeen sites, according to poll workers.

Nancy Boston, the Bell County Republican Party chairman, said the new machines may have played a role in Tuesday’s long lines. She also attributed it to another reason.

“It was my understanding that they had training for the early voting judges, but they had no in-house voting for the early voting clerks,” Boston said, adding some workers are likely just not familiar with the new equipment. “It just takes awhile to get used to the equipment. The equipment you have to set it up in a certain sequence. If you don’t set it up in sequence, it doesn’t work properly and you have to go back and restart it.”

Boston added it might take some time to get the machines worked out, but she was confident voting will be going smoothly by the end of the week.

Regardless of the mechanical issues, the long lines at the county’s polling places Tuesday indicated local voters’ level of engagement for Nov. 3 election.

“We are seeing voters determined and committed to not take our democracy for granted,” Bell County Democratic Party chairman Chris Rosenberg said. “They will tough it out in long lines in the middle of a pandemic to have their voices heard.”

In 2016, voters set records in Bell County, with 9,101 ballots cast on the first day of early voting, and county election officials predicted another high turnout Tuesday. As of 9:30 p.m., Tuesday, the county had not yet released first-day turnout numbers — more than four hours after the polls had been scheduled to close.

In Coryell County on Tuesday, election officials reported a total of 3,301 ballots cast on the first day of early voting. There were 1,249 ballots cast in Copperas Cove and 780 in Gatesville. A total of 1,272 mail-in ballots were counted Tuesday.

Killeen resident Pasha Johnson, 44, said this was the first time she has seen a long line to vote.

“I have always early voted every time it was time to vote since I was 18,” she said outside the community center. “This is just a part of my regular routine and I always vote every year. I have been here since about 7:20 a.m. and the line was over the hill over here and wrapped around as I started waiting.”

Pasha Johnson said when she arrived, election workers had come out to announce that the electronic poll books were down.

C Middleton, a 63-year-old Killeen resident, said he was waiting outside the community center since 7:15 a.m. to vote.

“The line was on the other side of the park when I got here,” he said. “They told us that the actual voting machines were fine but the machines they used to check in (the electronic poll books) were down. They made sure to clarify before people just walked off.”

Middleton said it is important to vote because it affects you and your life.

“If you don’t vote, what do you have to complain about?” he said. “I vote in this area every time voting comes around and I make sure that I vote. I have been voting since I was 18 years old.”

With COVID-19 guidelines in place, early voting in Texas has been increased this year from two to three weeks. The early-voting period will last through Oct. 30. Election Day is Nov. 3.

Killeen-area voters may notice a longer ballot this election when they head to the polls. That’s mainly due to the city and school board elections that were canceled in May, and then lumped in with the Nov. 3 general election.

TaNeika Driver-Moultrie, president of the Killeen Branch NAACP, said she visited Killeen early voting locations Tuesday, and was impressed with the turnout.

“I’m very proud of the Bell County voters,” she said, adding the voters seemed optimistic and patient with the long lines. She encouraged voters to bring lawn chairs, bottled water and snacks.

“I think that we’re going to continue to see long lines (throughout early voting),” Driver-Moultrie said.

Voters also can cast their ballots 7 a.m. to 7 p.m. Nov. 3 at any of the 41 voting centers throughout the county.

Registered voters need to bring one of seven acceptable forms of photo identification when they visit their polling place. Those include a Texas-issued driver’s license; a Texas election identification certificate; a personal ID card; a Texas license to carry a handgun; a U.S. military ID card; a U.S. citizenship certificate; or a U.S. passport.

If you don’t have one of the seven forms of ID, you can still vote by signing a form that states you have a “reasonable impediment” from getting the required identification, according to the Texas Secretary of State. The form will be available at each polling location.

Ballots by mail can still be requested by sending applications to Mark Bishop, Elections Administrator, 407 S. Pecan, Suite 102, Lampasas, TX 76550. Applications must be received by close of business Oct. 23.