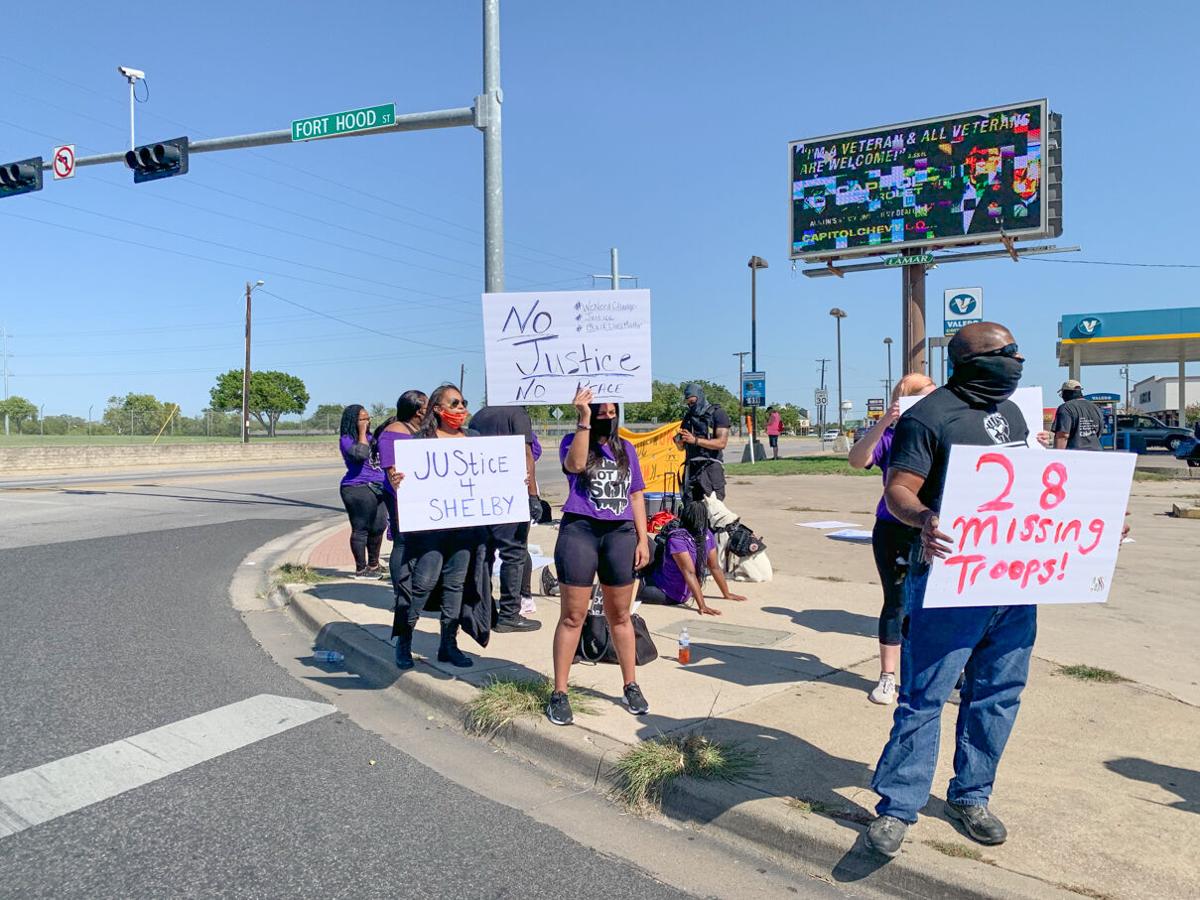 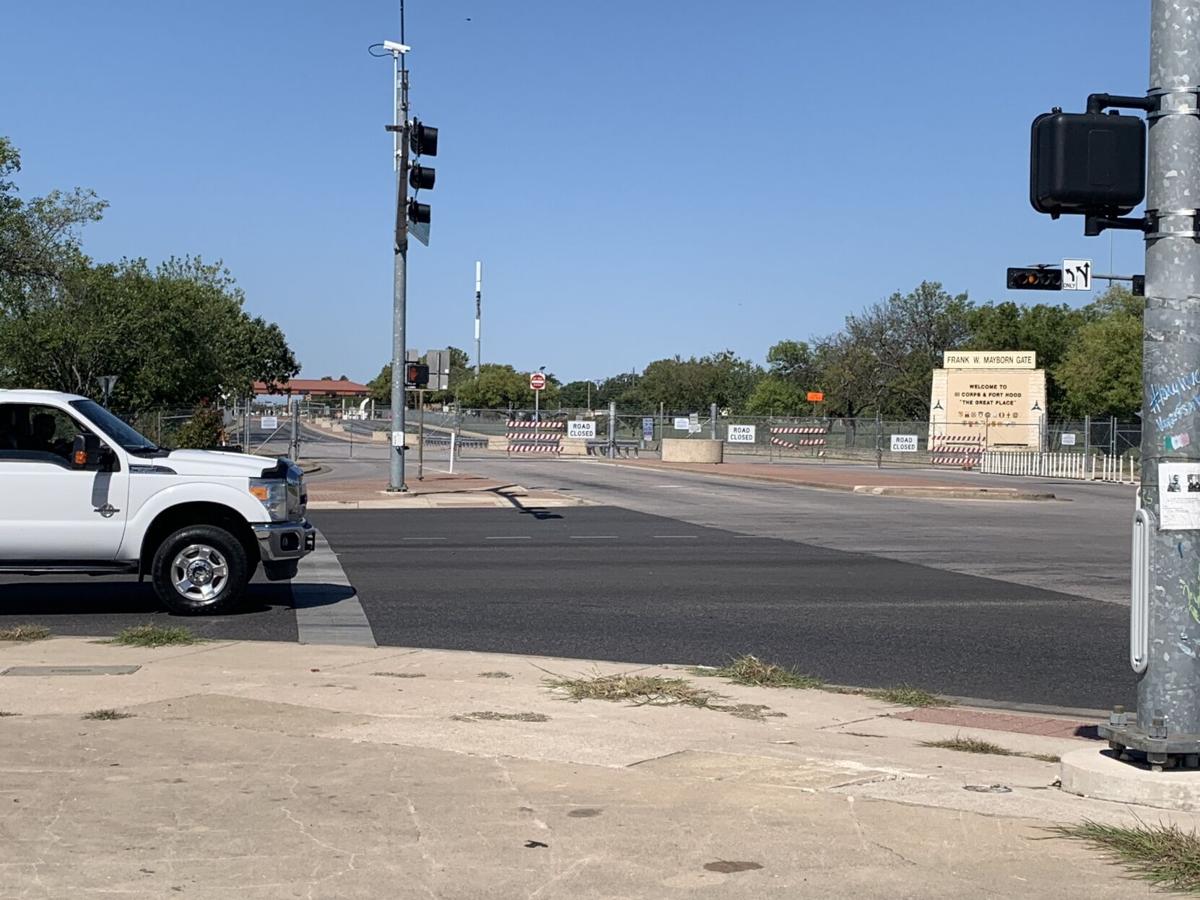 Fort Hood closed its East Gate Friday, and will keep it closed Saturday. A protest is happening at the intersection of North Fort Hood Street and West Rancier Avenue. 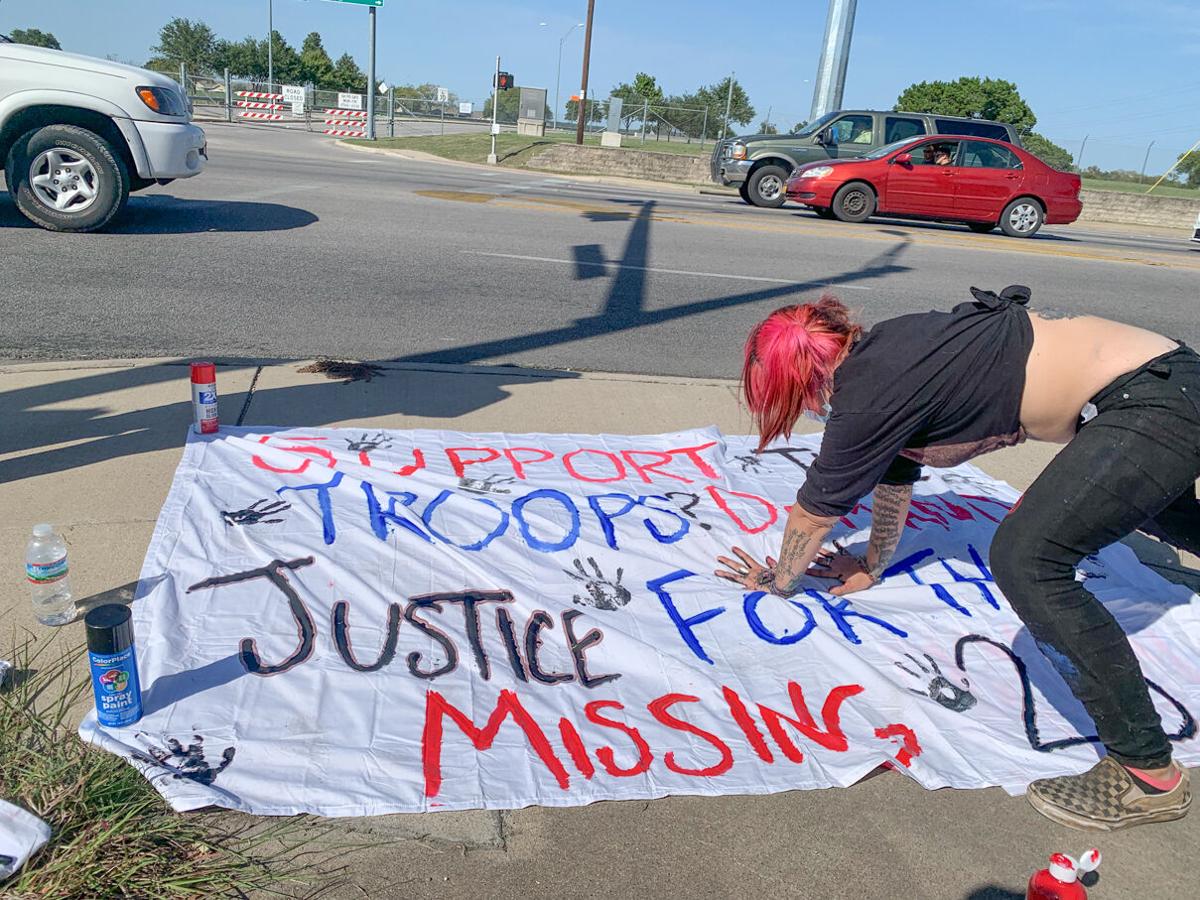 A protester makes a sign during a protest near Fort Hood's East Gate Friday. 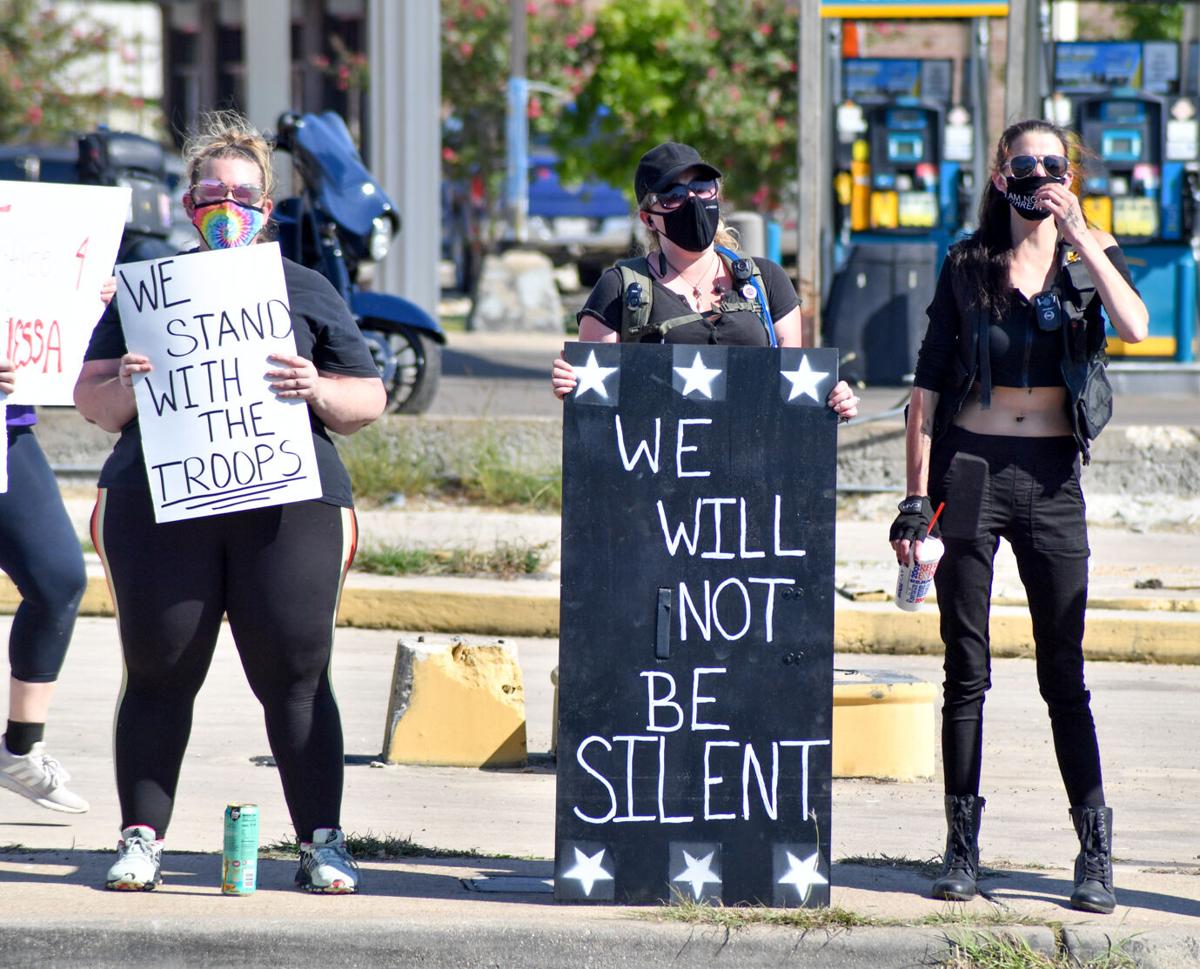 Three people gather near the intersection of North Fort Hood Street and West Rancier Avenue for a protest about the recent deaths of Fort Hood soldiers. 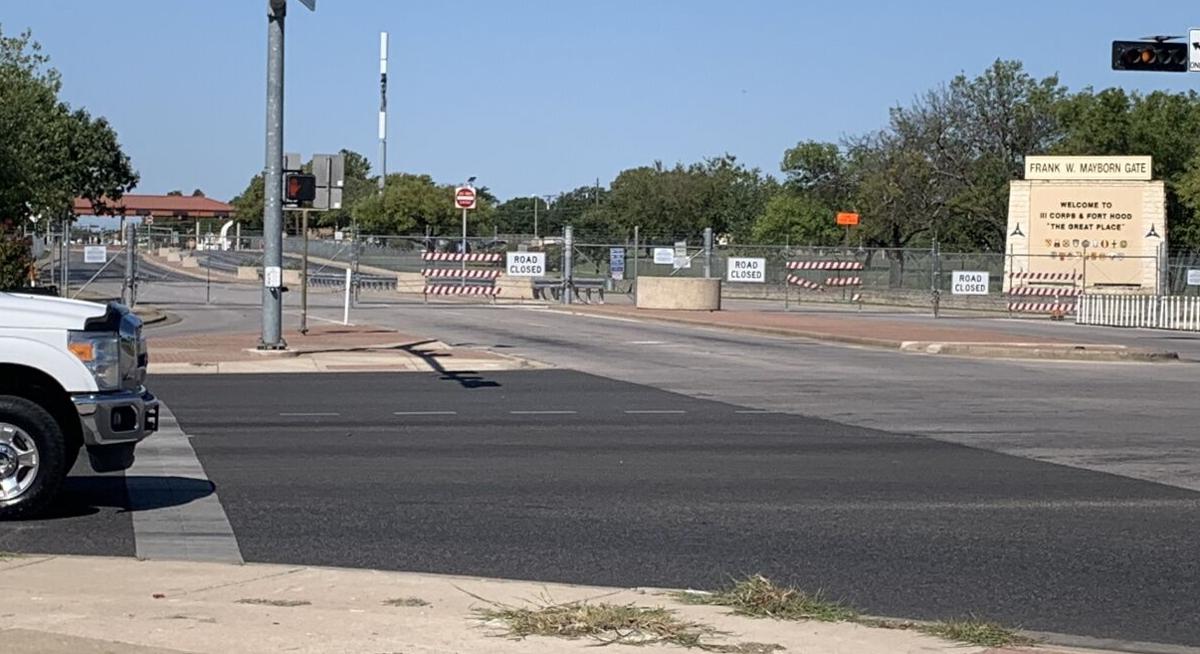 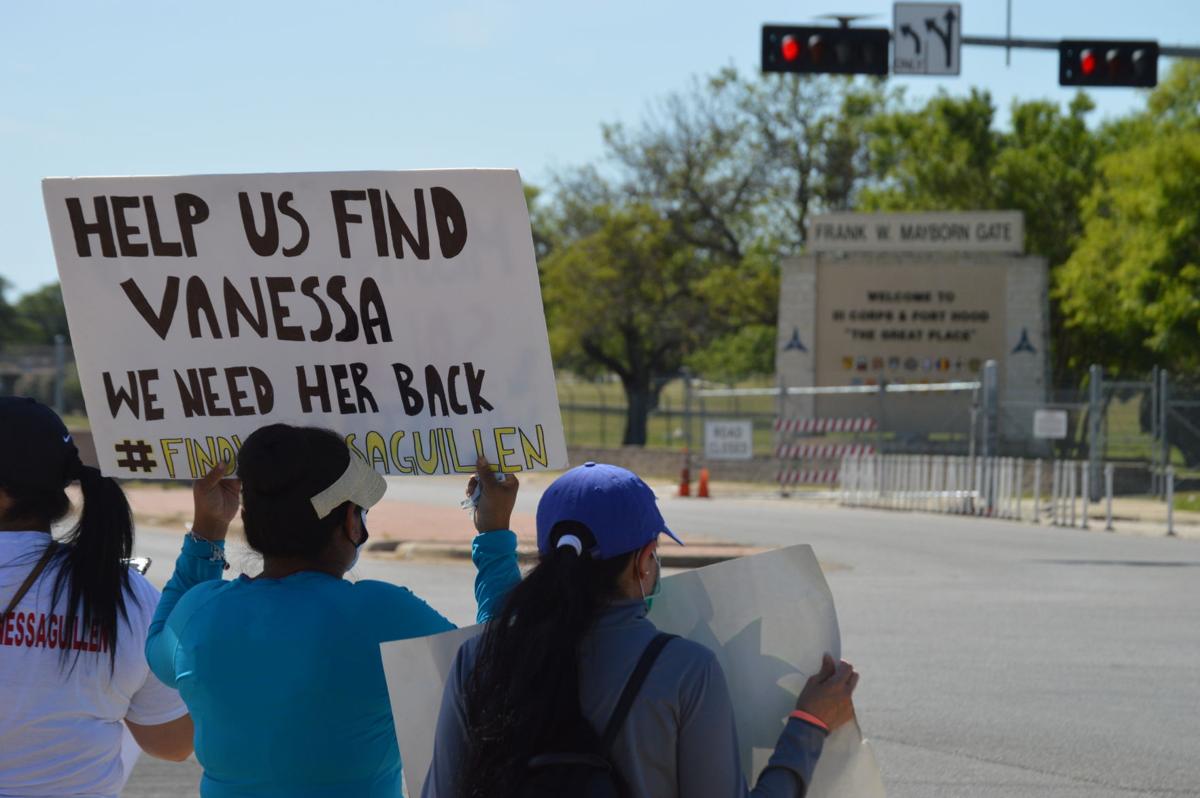 In this file photo, a woman holds up a protest sign in front of the Fort Hood east gate in June.

Fort Hood closed its East Gate Friday, and will keep it closed Saturday. A protest is happening at the intersection of North Fort Hood Street and West Rancier Avenue.

A protester makes a sign during a protest near Fort Hood's East Gate Friday.

Three people gather near the intersection of North Fort Hood Street and West Rancier Avenue for a protest about the recent deaths of Fort Hood soldiers.

In this file photo, a woman holds up a protest sign in front of the Fort Hood east gate in June.

Fort Hood closed its east gate at the intersection of Fort Hood Street and Rancier Avenue from 11 a.m. to 8:30 p.m. Friday and today, and a protest was held Friday and another is planned for today.

According to a post on Fort Hood’s Facebook page Friday morning, the closure of the east gate — a major entrance and exit for Fort Hood — is part of “random security measures frequently enacted across Fort Hood.”

A group known as The Watchmen based out of Dallas is planning the protests at the intersection near the Fort Hood gate.

Friday, the group protested from noon to 6 p.m.; and today, the protest will run from noon to 8 p.m. with a candlelight vigil beginning at 6 p.m.

Approximately two dozen people, most from The Watchmen and its sister organization Not My Son, gathered to protest Friday afternoon.

Many held signs and chanted things, such as “This base is killing our soldiers” and “What if it was you?”

Several passersby honked the horns of their vehicles as they approached the intersection.

According to its website, The Watchmen is “designed to mitigate and minimize the constant and consistent systematic oppression that is so prevalent throughout all our communities.”

Jeff Kagen, a protest organizer, said the group is protesting in response to the deaths of Vanessa Guillen and other Fort Hood soldiers this year.

Kagen said the group’s request for a sound waiver was denied by the city 20 minutes before the protest began, preventing the group from using megaphones and speakers during the protests. He said he filed for the waiver on Sept. 9.

He took issue with Fort Hood saying the nearby gate closure was a “random” security measure.

“They are lying and hiding still, the fact that we’re out here. So, it just proves to the point that Fort Hood can not tell the truth to their own people. They can’t even post a factual statement on Facebook,” Kagen said.

Fort Hood officials confirmed Friday morning that they knew the protest was planned for the day. Fort Hood did not respond to further questions from the Herald about the gate closure.

Christina Scott, a member of Not My Son, the sister organization of Watchmen, said parents are seeing their children enter the Army, trusting that they will be taken care of. At Fort Hood, that has not been the case, she said.

“That lets you know if they can’t be looked after, who can be looked after?” Scott said Friday. “So, it is kind of hard to process whenever you realize that our own military, they don’t have the same voice that civilians have.”

Scott said that civilians have to be the community that speaks out for the soldiers.

Ofelia Miramontez, the spokeswoman for the Killeen Police Department, provided a statement on the protests Friday.

“We support everyone’s right to peacefully protest, and the department has a plan set in place in order to keep the demonstrators and community safe. We simply ask that everyone express themselves peacefully and with respect to fellow citizens and property,” Miramontez said.

Weekly Friday protests had been happening near the corner of Fort Hood Street and Rancier Avenue for much of the summer in the wake of the disappearance and death of Spc. Vanessa Guillen, a Fort Hood solider reportedly killed by a fellow soldier in a Fort Hood arms room in April. However, those protests stopped about a month ago, following Guillen’s funeral in Houston.

If all these "protesters" want to save lives they'd accomplish their goal more effectively if they protested against families considering moving to Chicago!

That's about the most ridiculous thing I've ever heard of. Yeah people have the right to peacefully assemble but they don't have the right to break the law by blocking traffic. Now you cowards are caving into the threat of a "protest" by closing gates and hindering access to hundreds of personnel trying to get to and from their jobs! Is that the way you train for war? If the enemy shows up then lock the gate and hope they go away! Completely gutless display by Fort Hood and Killeen "Leadership"!!!

@Hacksaw That is what protests are about..killeen KPD/Fort Hood soldiers are doing the right thing in our city. They are the ones respectfully blocking traffic for the protestors. Killeenians don't have much injustices here because when it actually happens, we the people of killeen take action.. This city is very diverse and all colors, and ethnicities ban together. I am proud that the people will rule when the system is corrupt or faulty. Hopefully other cities can learn from the people of killeen/Fort Hood area. Can't mess with Texas! Especially Killeen/Fort Hood!

Have you taken your medication today?

Who do you think makes up the "diverse" citizenry of Killeen. If Fort Hood closed down Killeen would dry up and blow away.

"Killeenians", whatever those are, are killing each other on a daily basis. Just pick up your local newspaper and read it once in a while. Killeen was in the top 10 worst places to live! It had a higher crime rate than San Antonio or Dallas!

But yeah, you continue to fantasize in your little dream world of diversity and harmony among the masses but you'd better look both ways before crossing the road because that's where the cars drive!

How can kdhnews release this article without proofreading it?