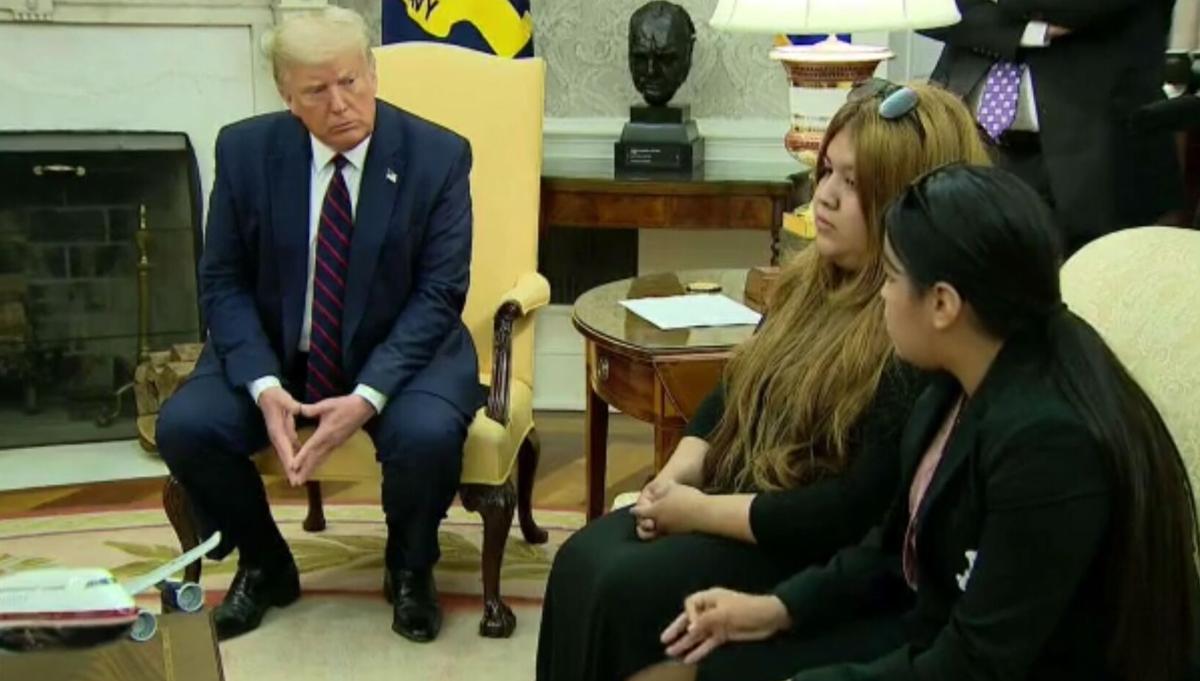 President Donald Trump meets with the family of Spc. Vanessa Guillen today at the White House. 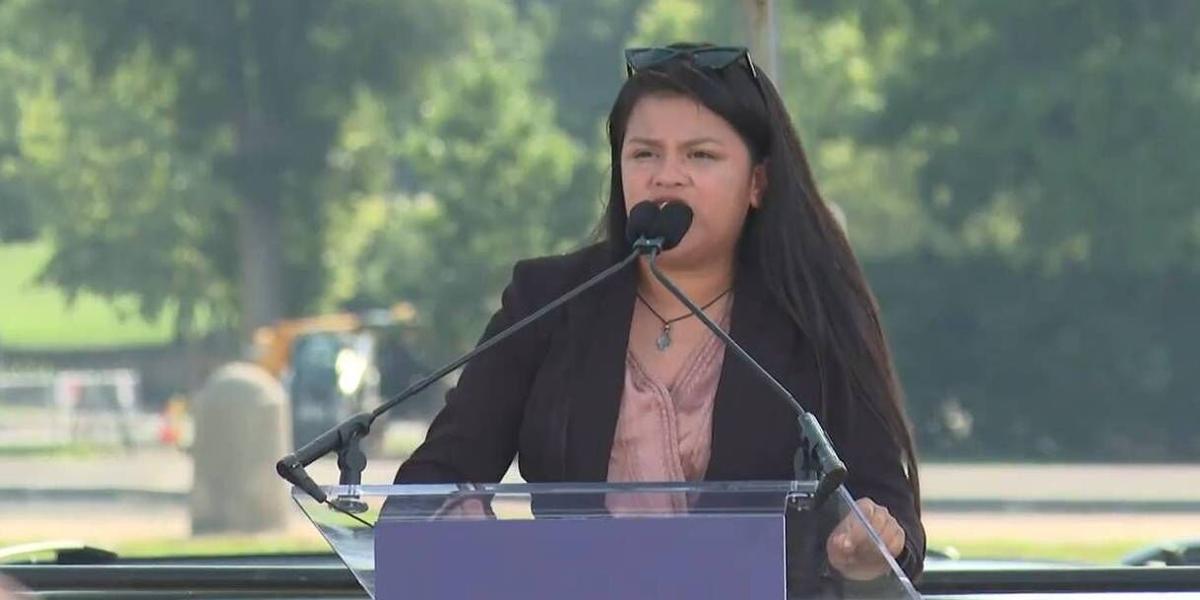 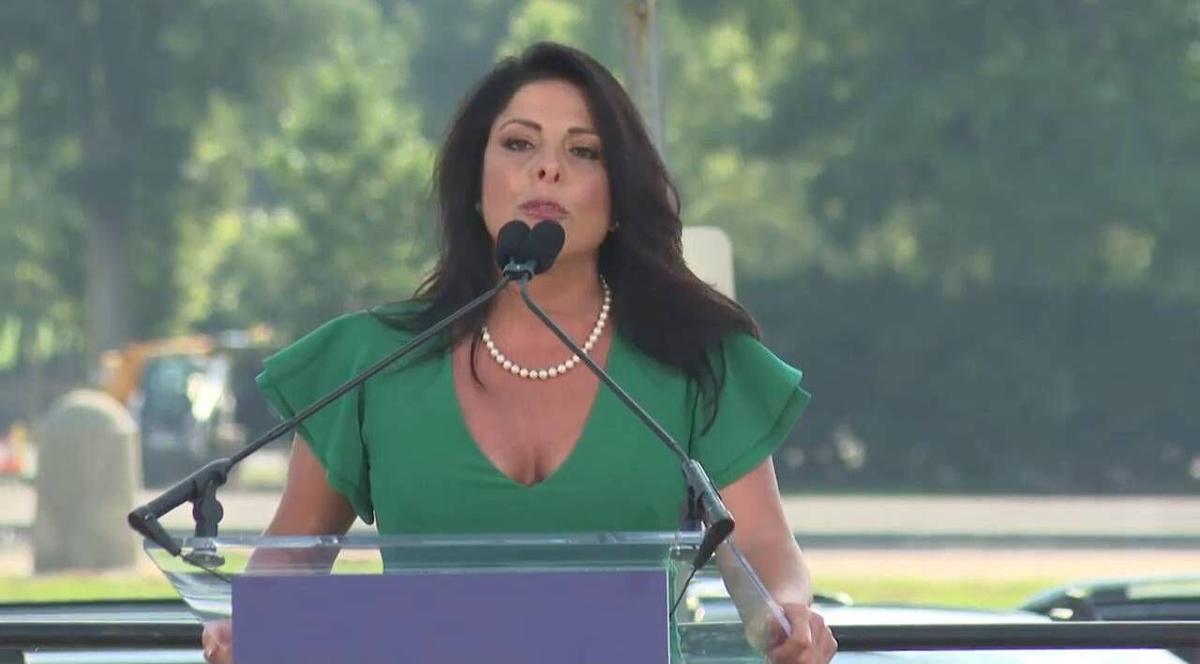 Natalie Khawam, the lawyer for the family of Spc. Vanessa Guillen, speaks at their press conference Thursday morning.

President Donald Trump met with the family of Spc. Vanessa Guillen and its lawyer, Natalie Khawam, in the Oval Office on Thursday.

Khawam and the family filled him in on the background of the death of the Fort Hood soldier and subsequent investigation that has made headlines nationwide.

“It’s an incredible story. It’s a terrible story,” Trump said to the family in the Oval Office. “So we’re going to look into it very powerfully. We already have started, as you know, and we’ll get to the bottom of it. Maybe things can come out that will help other people in a situation like Vanessa. We’ll be in touch with you constantly.”

Trump told the family that the FBI and the Department of Justice have already gotten involved in the investigation.

“We didn’t want to have this swept under the rug, which could happen,” the president said.

Khawam briefed the president on a bill Rep. Markwayne Mullin, R-Okla., and Rep. Tulsi Gabbard, D-Hawaii, had introduced which would allow soldiers to report sexual harassment to organizations outside of their chain of command.

She told the president that Guillen, 20, had not made a formal report of sexual harassment to military officials, but had told her family about it.

Lupe Guillen, the younger sister of Vanessa, told Trump her sister feared retaliation from her chain of command.

“We need a change, and we need a positive change, because our troops need to feel safe, they need to feel respected, because they’re the ones putting their lives at risk,” Lupe Guillen, 16, said.

Lupe Guillen reiterated to Trump that her sister was not supposed to be at work that day.

“We need a congressional investigation, because it’s impossible that no one saw, no one heard anything,” she said.

Through the course of the investigation, officials have learned that another soldier in Vanessa Guillen’s unit may have killed her.

Spc. Aaron Robinson, who fatally shot himself along a Killeen street on July 1, has been named by Cecily Aguilar, another suspect in the case, as the one who killed her. Aguilar told investigators that Robinson told her he used a hammer to kill a female soldier in a Fort Hood arms room on April 22, the day Vanessa Guillen went missing.

Khawam said Robinson was under watch at Fort Hood, but he escaped into Killeen and was walking along Rancier Avenue, where he took his life after being approached by a Killeen police officer.

Khawam told the president the senior attorney at Fort Hood told her and the family that Army officials didn’t have enough evidence to arrest Robinson prior to his death, hours after Vanessa Guillen’s body was found near the Leon River in Bell County.

Midway through the meeting with the president, Khawam updated him on the status of the funeral.

“You know, the saddest part of this all is her funeral is around the corner and they won’t have her body in the casket,” she told Trump.

Guillen’s older sister, Mayra Guillen, told the president that investigators have not released her body to the family since it was an open investigation.

Trump looked at a staffer off-camera and said, “That’s no good. We’re going to take care of that.”

Khawam told the president the family would like to have the funeral as soon as possible in Houston, where Guillen is from.

“We’ll make sure that happens,” Trump said before offering to help financially if the family needed it.

Rally on the bill

Khawam and the family held a rally earlier Thursday morning in Washington, D.C., to announce that they are introducing the #IAmVanessaGuillen bill to Congress.

Khawam spoke first, saying, “We are here to demand justice for Vanessa.”

She said the bill should be approved by everyone.

“We’re not Democrats, we’re not Republicans, we are together today. We need to tell Congress to pass the IamVanessaGuillen bill today,” Khawam said.

Khawam said that she and the family will call out anyone who does not vote for the bill to pass.

“Fort Hood’s leadership has to be held accountable. They signed to protect every soldier but they did not protect my sister. This could have been prevented,” said Lupe Guillen, who spoke with loud emotion as she pleaded for justice for her sister.

“They treated my sister like she was a nobody. They see my sister as an object, a number,” she said. “My sister deserves to make history, to be honored and to be remembered through the bill.”

She said relatives were disappointed to not have heard from Texas Gov. Greg Abbott regarding her sister’s case and were ready to take their story straight to the White House.

John Wittman, a spokesperson for Abbott, said the governor’s office has not heard from the Guillen family but is prepared to help. He said the governor’s office was looking into whether Texas has any authority over a U.S. military death. He also said the Texas attorney general’s office was looking into whether the family may be eligible for assistance from the crime victim’s compensation fund.

“Governor Abbott’s heart aches for the Guillen family and he and the First Lady keep them in their prayers,” Wittman said in a text message.

Following the rally, family and supporters of the Guillen family, members of Congress and community leaders marched to the White House, where the family met with Trump.

The Associated Press contributed to this report.

The attorney for a Killeen woman charged in the death case of Fort Hood Spc. Vanessa Guillen is asking a federal judge to impose a gag order i…

Have you read my article that located I Facebook under the heading: Killeen Tx Citizens Expressions. I have had a conversation with a woman by the name of Brigette Baker who does not think much of the male species. I have tried to extract a dialogue from her on what came first, the call from this newspaper on 'what is being done as to locating the female soldier, a Ms. Vanessa Guillen, and when they found her dead, it was switched to her Mother she said, Ms. Vanessa Guillen, that in a previous conversation Ms. Guillen had said that a male counterpart had made suggestive remarks to her, but she did not report it as 'she was afraid it would make her look bad to her superiors. From the on, the statements revolved around her 'female attributes as to relating to the male species, the males being aggressive towards her and her fear that if she said something it would go against her. And they kept that dialogue up until today when they met with President Trump and you know what that conversation was like. All she wanted to talk about was women and how they are mistreated. So if you are interested then I suggest that yougo that article and read it.

But I tell you, it practically had me in tears a couple of times.

Copy: 'Family of Vanessa Guillen and lawyer announce bill in honor of Vanessa'.

Continuation of copy: 'Khawam spoke first, saying, “We are here to demand justice for Vanessa.”

She said the bill should be approved by everyone. End of copy.

To me, this has grown all of proportion in that it resolved from a murder investigation into a activity that was purported by her Mother to be one of sexual assault. Now they are trying to get that into a deeper involvement of a Bill which bears the name of a woman who was killed by another service man while on the fort and was apparently carried off base to the area where she was buried by her assailant. Now comes the accusations, by a 3rd party, of her being assaulted by persons unknown. To me, 'what has one case got to do with the other case'?

I personally believe that we have lost all reasoning of 'just what is the importance of this case'. Do we have a Military or do we not? Have we lost the importance of what is Military duty in contrast to how do we perform our duty to the Military.

Copy: “We’re not Democrats, we’re not Republicans, we are together today. We need to tell Congress to pass the IamVanessaGuillen bill today,” Khawam said.

If the bill is passed into law, it will allow active-duty service members to file sexual harassment and assault claims to a third-party agency instead of their chain of command.' End of copy.

Is this what we want, to have a 3rd party get involved in the affairs of the Military? Is that what we want because when I was in the Military, the Military was a separate entity from all others and when you signed, and took the oath, you swore that you would 'obey' the orders of superior officers, period. Now we are involving 'others' in the actions of the Military and to me, that is not right.

So it would be safe to say that we should not have any women in the Military because that would subject them to 'unlawful actions of any other person in uniform and that would disallow all pilot training, all service connected activities that could be performed by any female. Is that what we want, male and female alike.

As I said at the top of this article, is this pertaining to a female soldier that was apparently killed while on Post, or is it the accusation of a Mother of sexual assault by another member of the Armed Forces as I am having trouble differentiating between the two.

Let's all grieve for the loss of a loved one and go about our business instead of trying to drag this out into a full blown scandal which continues on and on.

I feel you! Too many different stances. This is not sexual assault, it is murder!