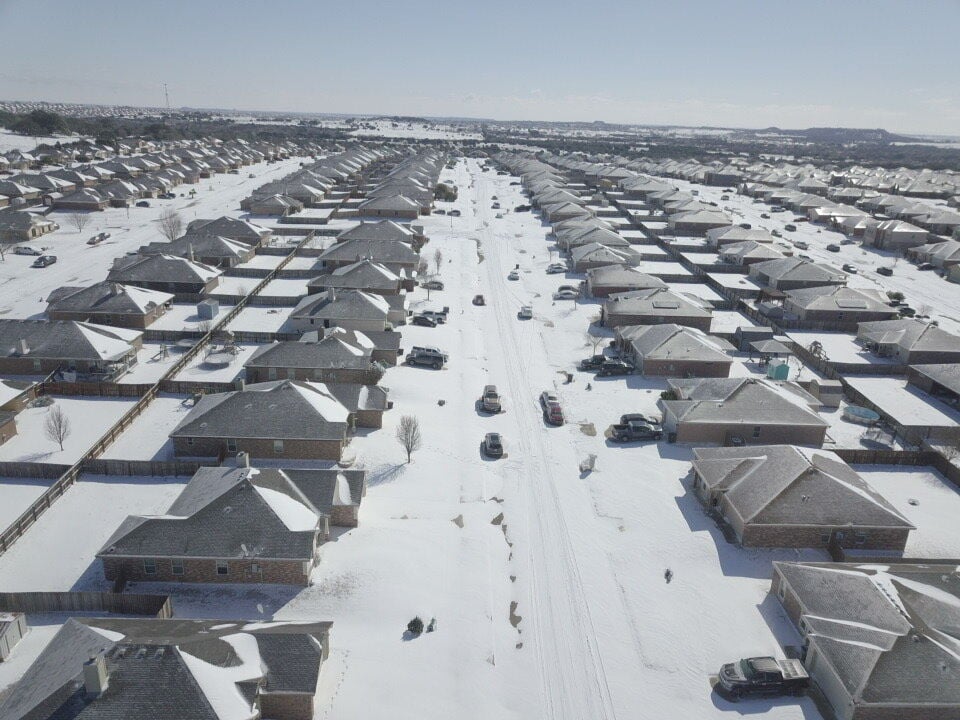 Killeen houses and vehicles in the Bunny Trail-Goodnight Ranch area rest under a blanket of snow Monday morning following a winter storm in the area. Killeen resident Justin Cox captured this photo with his drone. “The wind got worse and the chill started depleting the battery faster than normal (expected).  After about 10 minutes in the air I started losing feeling in my hands (can’t wear gloves on the sticks), so I landed as quickly as possible,” Cox said on his Facebook page. To see more of Cox’s aerial photos, go to his Facebook page at JC Drone Ops and Media. 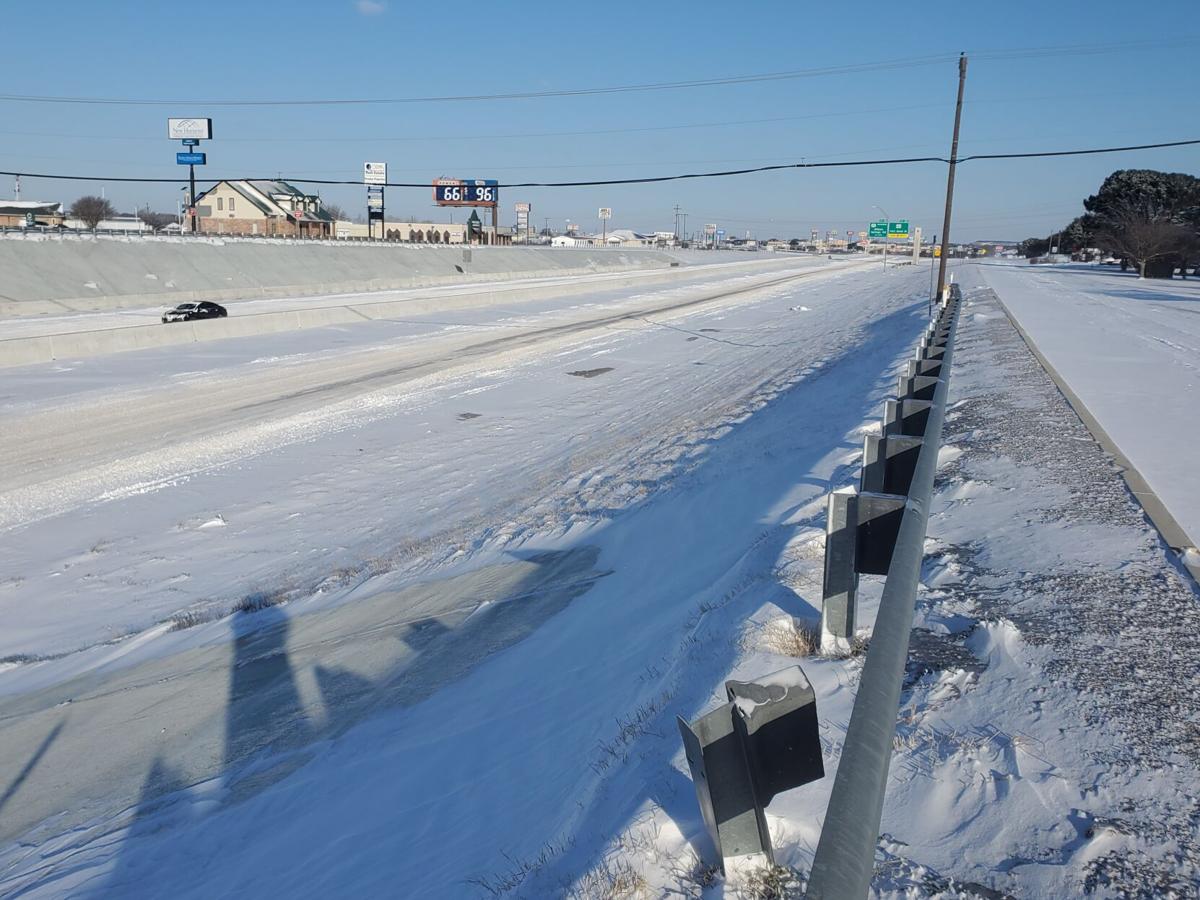 A car travels on Interstate 14 in Killeen Monday.

Killeen houses and vehicles in the Bunny Trail-Goodnight Ranch area rest under a blanket of snow Monday morning following a winter storm in the area. Killeen resident Justin Cox captured this photo with his drone. “The wind got worse and the chill started depleting the battery faster than normal (expected).  After about 10 minutes in the air I started losing feeling in my hands (can’t wear gloves on the sticks), so I landed as quickly as possible,” Cox said on his Facebook page. To see more of Cox’s aerial photos, go to his Facebook page at JC Drone Ops and Media.

A car travels on Interstate 14 in Killeen Monday.

Killeen-Fort Hood area residents woke up to a blanket of snow, single-digit temperatures and rolling electricity blackouts Monday after a winter storm passed through, crippling much of Texas in its wake.

Roads across the city were covered in 2 to 6 inches of snow Monday morning after hours of snowfall that started late Sunday. The white stuff made the road conditions worse after they already were hazardous after days of freezing rain and sub-freezing temperatures in the area.

A few cars and trucks were seen Monday morning driving slowly on interstates 14 and 35, where Texas Department of Transportation had plowed the roadway, however, conditions were still slippery.

Electricity provider Oncor initially said rolling blackouts could last for about 45 minutes, but then later on Monday said they could last for hours, as thousands of outages are being reported in the Killeen-Fort Hood area.

“Due to the severity of the electric generation shortfall, our expected outage length of 15 to 45 minutes has been significantly extended. Outages due to this electric emergency could last for hours and we ask you to be prepared,” Oncor reported on its power outage website. “In addition, we are responding to separate outages caused by the record-breaking winter storm that continues to impact our entire service territory. We are doing everything possible to respond to each of these power emergency events.”

Oncor said they were currently operating at “critical level 3” the highest emergency level for Oncor operations.

“This is historic for me,” Oncor spokesman Karl Green said. “I’ve never seen anything like this.”

Some Killeen and Copperas Cove residents said their power went out around 2 a.m. Monday, and was still out by Monday afternoon.

The Herald was peppered with questions Monday from concerned relatives and others asking about the power outages.

“There are two major issues affecting many of customers right now: winter storm outages and controlled power outages directed by ERCOT (Electric Reliability Council of Texas), which serve to reduce high demand and protect the integrity of the electric grid. Due to the fast moving nature of these two power emergency events, we are not currently able to break down the difference in outages on our Oncor Outage Map,” Oncor said in a news release. “Given the unique combination of lack of generation and historic winter storm damage, estimated restoration times are not yet known. For outages related to the winter storm, our crews continue working around the clock to restore power. However, continued winter impacts such as extreme cold, treacherous road conditions and ice buildup is impacting progress.”

Oncor said customers do not need to report their outages at this time. “Our crews continue to make repairs from the storm so that when electric generation is available it can be delivered. We urge any customer who is experiencing a life threatening or emergency event to please call 911,” according to the electric company. “We are using all designated power lines for controlled outages so that hospitals and other critical infrastructure remains intact and system stability is preserved. This means that customers near critical facilities, or those in limited areas where rolling outages won’t take place in order to maintain grid stability, may not experience outages, while those farther from these facilities or areas may be out multiple times or for longer instances.”

The temperature was about 5 degrees at 8 a.m., not counting the wind chill, and had risen to about 10 degrees two hours later. The high in Killeen was slated to reach 21 Monday afternoon before dropping back to the single digits by Tuesday morning.

For the the remainder of the week, another system is expected to move in overnight Tuesday, with ice accumulation expected, according to National Weather Service Meterologist Allison Prater. This will change to a wintry mix mid morning on Wednesday into Wednesday evening, then turning more to snow overnight Thursday.

“Stay indoors and keep off the roads as much as possible throughout the week,” Prater said on Monday. “Cover and drain your pipes and outdoor sprinklers.”

Prater added that Friday will finally see above freezing temperatures, with highs in the upper 30s and lower 40s.

Killeen and Copperas Cove are both providing warming shelters for those who need them.

“Those using the center have been relocated and future persons in need should go directly to the church,” city officials said in a news release.

“The doors are open and citizens will be welcomed in for some warmth. The Warming Center is offered for temporary relief from freezing weather conditions but does not offer full sheltering services,” Cove officials said in a release, adding about five people were at the library Monday morning.

Residents who visit the center are encouraged to bring a change of clothing, bedding, toiletries and other things they may need.

At Texas A&M University-Central Texas, officials closed the campus and canceled classes Monday and Tuesday, and said online classes would resume when network services are restored.

At Central Texas College, “all operations and all classes ... are suspended for the Central and Fort Hood campuses” through Wednesday, officials said.

Killeen ISD canceled classes Monday and Tuesday, and Copperas Cove ISD said it was canceling all classes today and Wednesday.

Bell County Judge David Blackburn declared a state of emergency in the county Monday, announced the closure of non-essential county offices, and canceled the operations of all three of the county’s COVID-19 vaccination centers through the end of the week.

“Given the current and forecasted weather conditions, the rotating brown outs that ERCOT has announced, and continuing poor road conditions, I am authorizing the closure of non-essential county offices for Tuesday,” Judge Blackburn said. “We’ll assess conditions tomorrow for what we might need to do for Wednesday.”

In keeping with this action, Blackburn also canceled this week’s meeting of the Commissioners Court, which was set to convene Tuesday.

“Even though we are posted to conduct the meeting either in person or virtually, our internet provider has advised us that internet coverage over the next 24 to 48 hours is not going to be reliable,” Blackburn said. “That being the case, it wouldn’t be prudent to try and conduct the meeting virtually.”

For everyone with scheduled to receive their first doses from either the Sammons Community Center in Temple or the Killeen Community Center, their booking will automatically be shift one week, officials said.

City of Killeen municipal offices will be closed today due to the weather, officials said.

At the Bell County Sheriff’s Department, “we have collected all of our 4 wheel drive vehicles from all divisions and made them available to our patrol division to ensure we have the ability to respond to calls for service when needed,” said spokesman Lt. Bob Reinhard.

“We are not expected to get above freezing until sometime on Friday. With that, we ask everyone to limit their travels unless it is absolutely necessary to be on the roads. While at home, limit electricity consumption so that we can all do our part to alleviate as much burden from the power grid as possible,” Reinhard said.

[angry] I hope that my power has not been off since before 4am Monday because some person in authority decided that it should be off this long to prevent power plant over load. I thought that power shut down was going to be rotated between communities for 30 to 60 minutes NOT 1 to 2 days or more. This issue needs to be investigated. How is it determined to choose what nieghborhoods to sacrifice? The district attorney or whomever need to look into this to if there is misappropriation of funds on a city wide level and to make sure there is no "respect of person (community) going on too. Like so many other Killeen citizens that are faithful tax payers and retired military servicemen & women I am displeased with the lack of preparation of Oncore especially with the kind of money they get paid. I have little ones and husband recovering from stroke and having no heat, no power is miserable. City official need to have an after action review all citizens needs to attend.

No power for 17 plus hours straight since 2am, this is not a rolling black out. Another friend says he gas had power all day never out

We still out of electricity from 2 am this morning is 11pm and still without electricity I have a CPA machine and I can't not used now.

Our electricity has been out since 2 am Monday morning but all of our neighbors except for the one on the left has theirs. We all live by shoemaker with our house in the middle of the street so what the heck is going on here.

How can you expect people to stay off the roads when they have no electricity to cook with. With all the technology today that we have, we have not figured out how to keep electricity on for our citizens during a bad storm. My entire neighborhood is out.