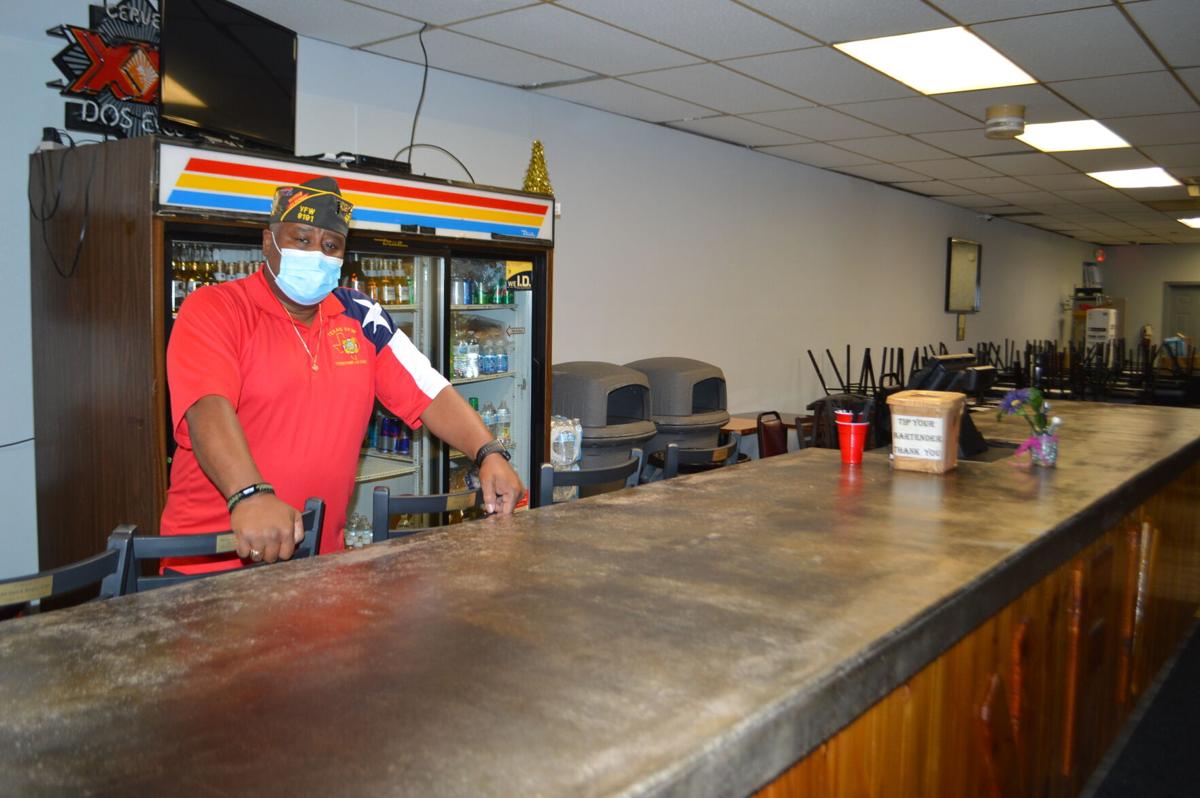 Kevin Williams, post commander of VFW Post 9191 in Killeen, stands behind an empty bar with a full cooler and overturned chairs behind him Thursday evening. 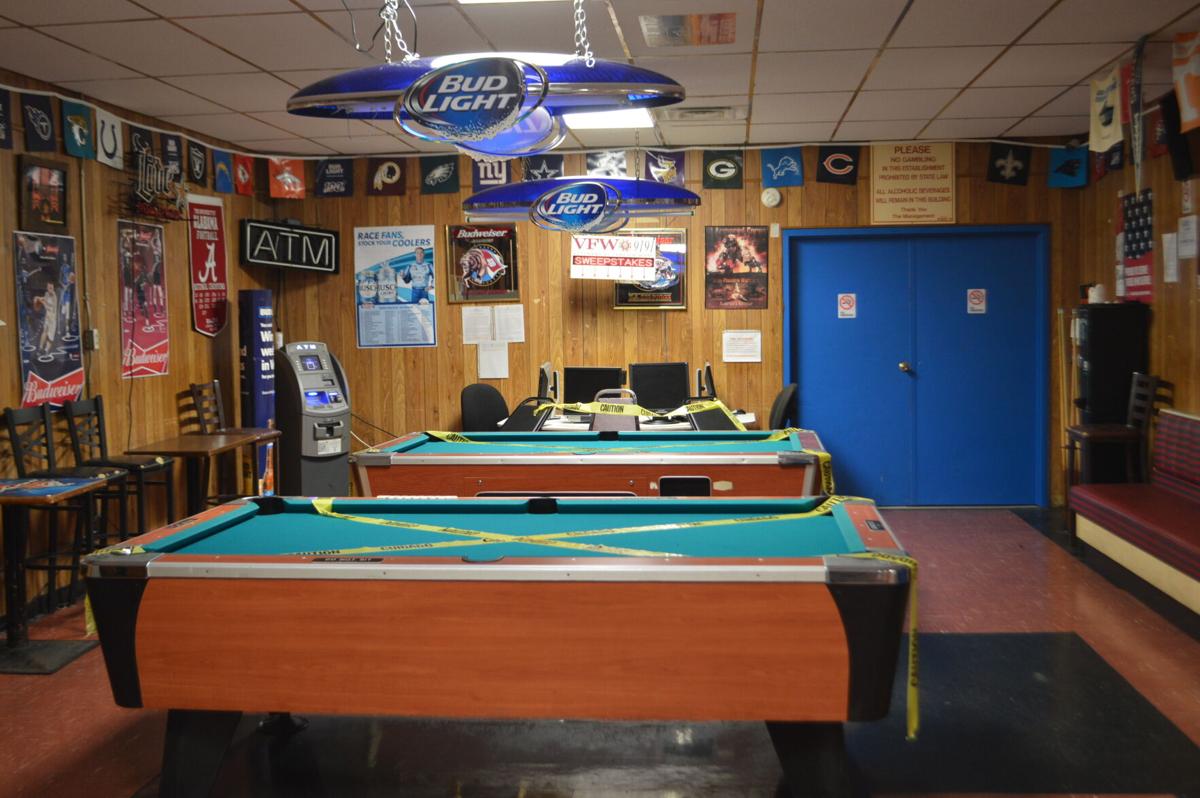 Caution tape is spread across a pool table at VFW Post 9191 in Killeen Thursday. Kevin Williams, the post commander, said members have not been able to come by for a drink or to check in. 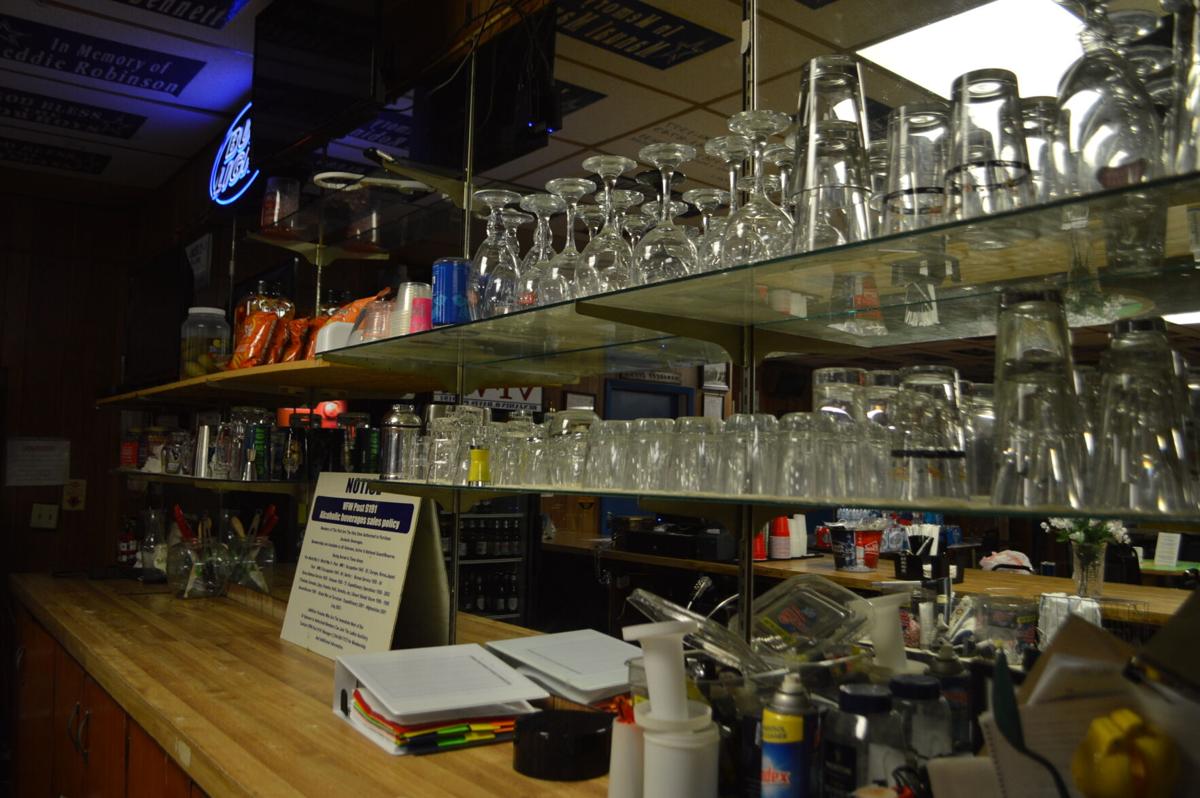 Bar glasses sit empty on a shelf, not used for a few months, indicative of Gov. Greg Abbott's executive order in June which closed establishments that make 51% or more of income from alcohol sales. 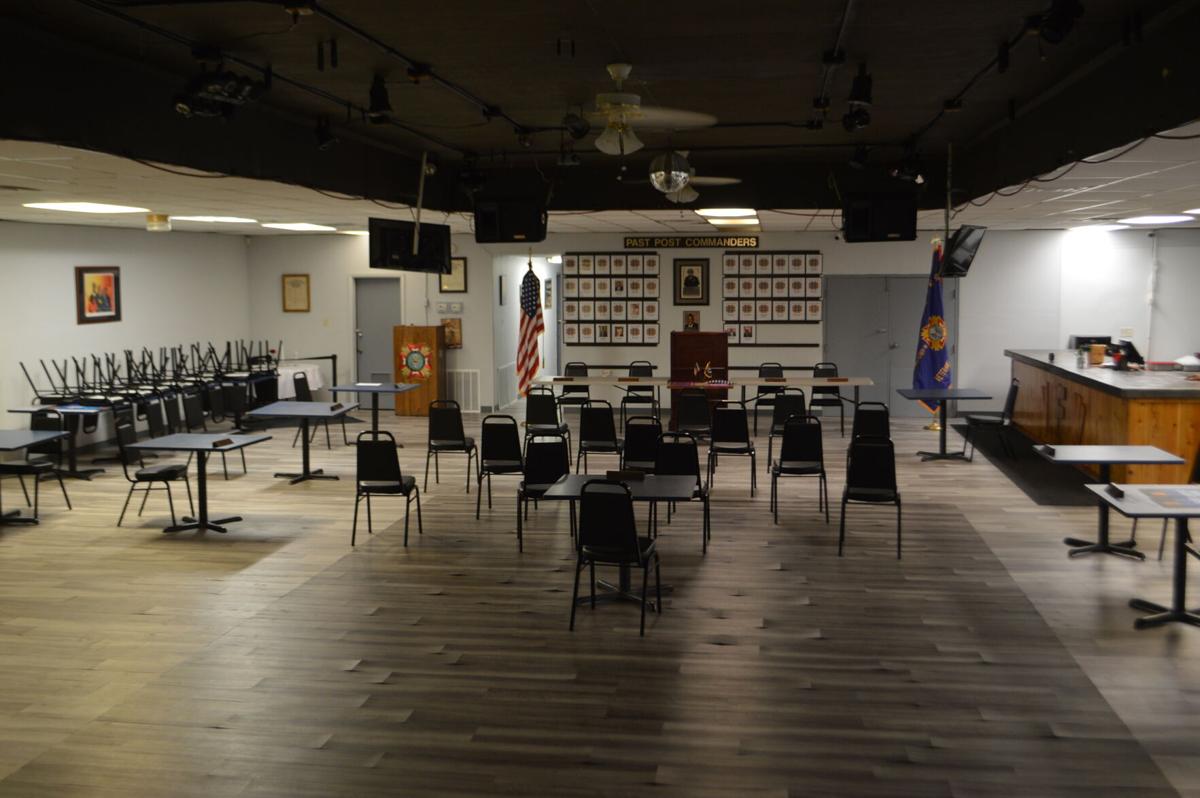 Chairs sit empty and overturned in the VFW Post 9191 in Killeen Thursday evening. Kevin Williams, the post's commander, said the post hasn't had any income since March 18.

Kevin Williams, post commander of VFW Post 9191 in Killeen, stands behind an empty bar with a full cooler and overturned chairs behind him Thursday evening.

Caution tape is spread across a pool table at VFW Post 9191 in Killeen Thursday. Kevin Williams, the post commander, said members have not been able to come by for a drink or to check in.

Bar glasses sit empty on a shelf, not used for a few months, indicative of Gov. Greg Abbott's executive order in June which closed establishments that make 51% or more of income from alcohol sales.

Chairs sit empty and overturned in the VFW Post 9191 in Killeen Thursday evening. Kevin Williams, the post's commander, said the post hasn't had any income since March 18.

As a result of a June 26 executive order from Gov. Greg Abbott, some area VFW posts are in danger of permanent closure due to a lack of income.

In a news conference addressing the order, Abbott said it was clear that Texans congregating at bars was largely contributing to the (then) spike in confirmed coronavirus cases in the state.

The order required bars and any similar establishment — where more than 51% of gross receipts stems from alcoholic beverage sales — to close, FME News Service reported that day.

Many of the VFW posts in the area — including VFW Post 9191 in Killeen — rely on alcohol sales as their primary source of income.

Carlo Davis, commander of VFW District 14 which covers both Killeen posts, said Post 9191 in Killeen is in such dire straits that it is close to being broke.

Kevin Williams, commander of VFW Post 9191, said the post hasn’t had any income since March 18 besides a couple of fundraisers that covered the electric bill.

He said the temporary closure of the post has taken its toll on the members.

“Our veterans come through and, you know, they come through (and) get something to eat — maybe wind down from a hard work day — and it’s been a pillar for 70 years here in Killeen,” Williams said in a phone interview Wednesday. “Now, we’re kind of limited on that with our older veterans really not having anywhere to go, us not being able to see them on a daily basis and just check in.”

Williams said Thursday it is not uncommon to see veterans park in the parking lot of the post and just sit in their vehicles even though they know they cannot go in.

He said it gives them a sense of normalcy and community.

The VFW offers services to veterans and their families, such as informing them of benefits they have with the Department of Veterans Affairs, having service officers at the posts who can better direct veterans to programs and services that could benefit them, legislative advocacy, community service and scholarships.

“We’re just basically crippled when it comes to servicing those guys,” Williams said.

Davis and Williams said the effect of a VFW post closing permanently would be felt not only by veterans but by the surrounding community.

For Killeen, in particular, VFW Post 9191 is very active in the community, Davis said.

Every Thanksgiving and Christmas, Post 9191 feeds over 500 people in the community, including deliveries to nursing homes.

Davis, who is a previous post commander of 9191, also said the post has opened its doors for other organizations to use, such as churches, motorcycle clubs and community action groups.

Davis said the VFW has attempted multiple times to reach out to the governor’s office in a plea to recognize VFW posts as essential services.

Several other district commanders and post commanders have sent letters to their congressional representatives.

No one has received a response from the governor’s office.

He said it is sad considering what all the veteran organizations — including the American Legion and the DAV — do for the community.

“For the governor, or whoever the leadership is that’s ultimately making this decision, to turn a deaf ear and a blind eye ... it’s a shame,” Williams said.

Davis said it wouldn’t take much for Abbott to take action.

Davis said there are options the VFW posts have. One option is to change their licensing with the Texas Alcoholic Beverage Commission from Red 51 to Blue 51.

A Blue 51 license is for establishments that generate at least 51% of income from food sales.

Davis said securing a change in licensing means more paperwork and more money that many posts frankly don’t have, to the tune of around $400 to $700.

Another option presented to VFW posts by the TABC was a suspension of the license.

Davis said that option isn’t very feasible since it would get the doors open, but it wouldn’t do anything for the main fundraising source for many of the VFW posts.

Davis said all of the VFW posts in his district — which goes from Temple to Marble Falls — are fortunate enough to have canteens.

“The canteen, that is our fundraiser, man, for our VFW programs, and a fundraiser to pay the bills — the electric, the water,” he said.

It would also mean reapplying for the license which costs more money.

“If you suspend your license, there’s a potential when stuff goes back to normal ... now, you’re talking thousands of dollars to get that license back — maybe, potentially,” Davis said.

He explained there is no guarantee the TABC would re-instate the licenses.

One post that has not suffered as hard as the others is VFW Post 8577 in Copperas Cove. Post Quartermaster Mike Anastasio said the reason is primarily because of a popular game — bingo.

Three of the 11 posts in Davis’ district host bingo.

Anastasio said that when he did the calculations, he figured out that about 12% of the income at the post comes from alcohol sales, and between 40 to 50% of sales came from bingo.

“We have not stopped our operations,” Anastasio said. “We just lost (in the) neighborhood of $40,000 a month in income, or gross income.”

Last week, the TABC gave the post the OK to open to full service. The post was allowed to reopen since he was able to show the TABC the calculations of gross income which showed the much higher revenue from sources other than alcohol, Anastasio said.

“That is one of my better posts in my district that’s doing well,” Davis said of Post 8577.

Anastasio said Post 8577 has even helped other posts with bills to keep them afloat.

“If the lights are going out, the membership here will help another VFW — they have in the recent past,” he said.