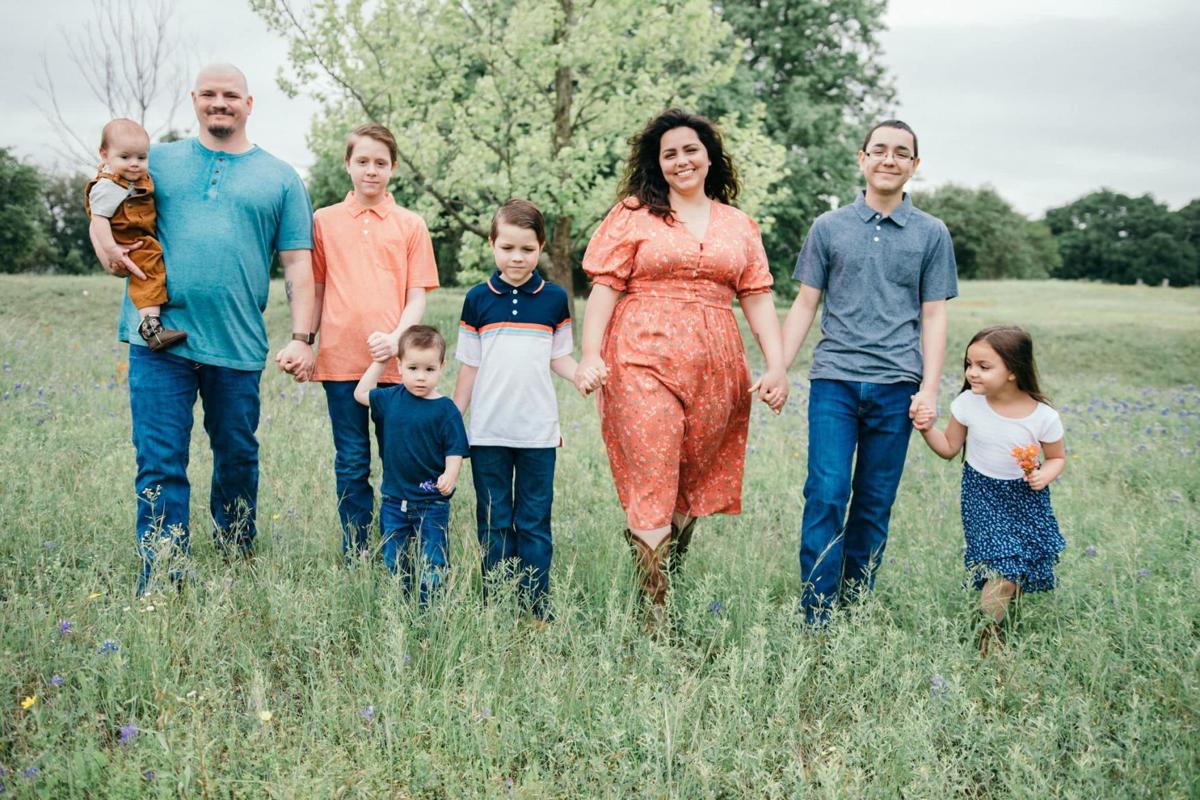 Killeen parents Joseph and Elise Whitt pose for a family photo with their six children. 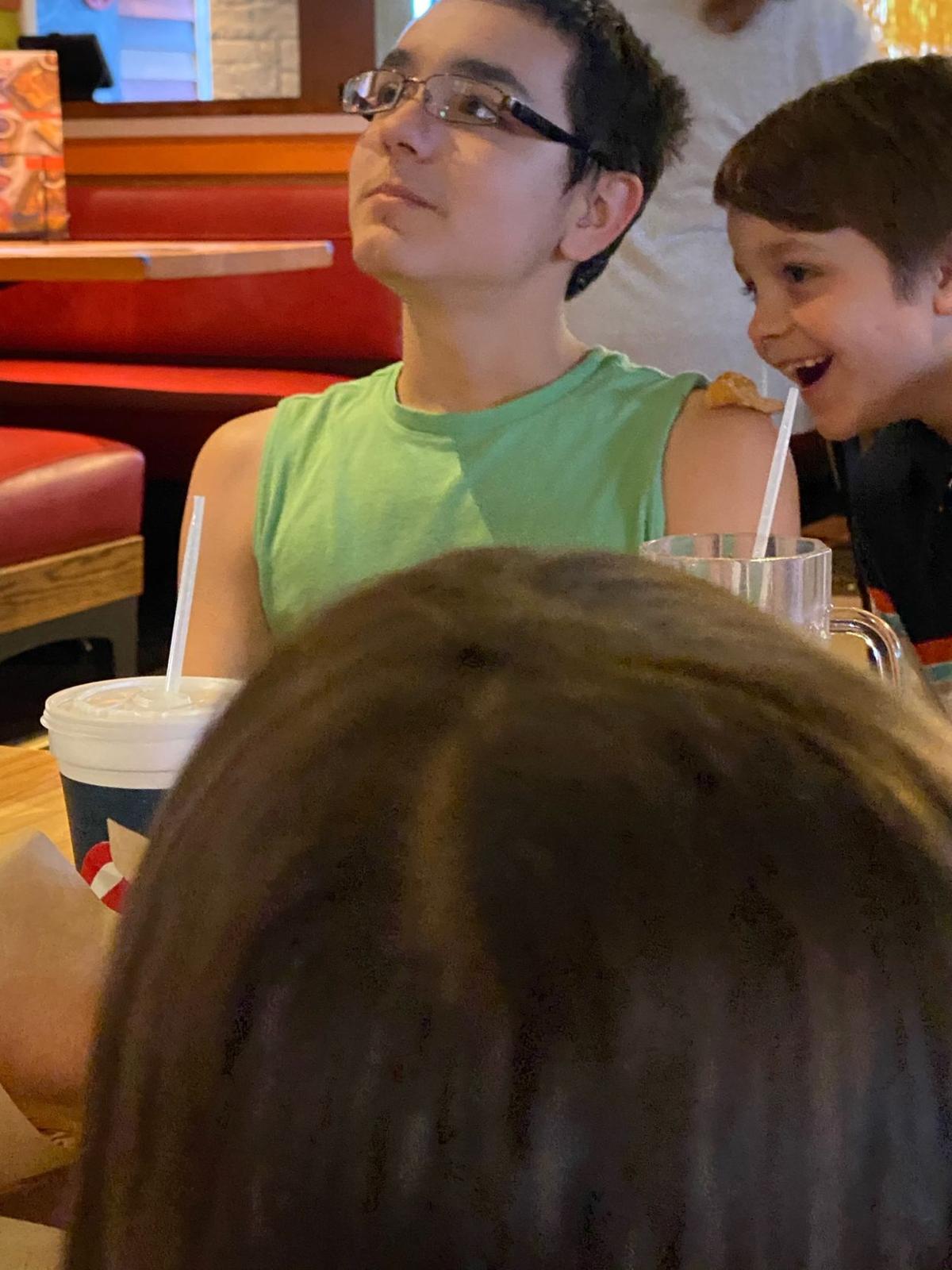 Levi Whitt, 14, and Noah Whitt, 9, share a meal with their family of eight on May 15 at Chili’s in Killeen.

Killeen parents Joseph and Elise Whitt pose for a family photo with their six children.

Levi Whitt, 14, and Noah Whitt, 9, share a meal with their family of eight on May 15 at Chili’s in Killeen.

When their family of eight was denied a table at the Cracker Barrel in Harker Heights Thursday because they exceeded the recommended numbers for restaurant seating, Joseph and Elise Whitt said they believe precautions in the name of preventing the spread of COVID-19 had gone too far.

The couple decided to kick off their 15th wedding anniversary celebration by taking their six children to their family’s favorite restaurant, but were ultimately denied service and was told their family is too large to seat at one dining table under social distancing restrictions.

“We didn’t really look at the protocol when Gov. (Greg) Abbott sent those out,” Elise Whitt said. “We assumed like most people that things were opening up, and things will be back to normal, with the exception of people wearing masks and places being not overly crowded.”

With their six children ranging in age from 1 to 14, she said it is not ideal to split the family up to have dinner.

“Our first time eating out since the restrictions were lifted was Friday last week when we went to Chili’s,” the mother said. “We didn’t expect to be told that only six people were allowed at a table.”

Whitt said when the manager at Chili’s saw the ages of her children she said she understood why they wanted to sit together, and found a way to make it work.

But when they attempted to kick off their anniversary with a brunch out together as a family, the Whitts said they were shocked when the manager at Cracker Barrel in Harker Heights stood firm in not allowing them to be seated together.

For ease of operation, Cracker Barrel locations across the country choose to enforce all recommendations and requirements from the CDC and state officials, according to Janella Escobar, director of corporate communications for national restaurant chain.

“Regardless of age, we only allow six chairs to a table,” Escobar said. “No more than six people. It’s black and white and easy to determine from location to location and across counties.”

Whether a policy is a state recommendation or a requirement, Escobar said protocols are being enforced in an inconsistent manner from one county to the next.

“We have had health department officials showing up and ensuring Cracker Barrels are following all recommendations and requirements,” Escobar said. “We ran into this over Mother’s Day as well. We were busy with lots of people ready to come in and dine.”

When the family asked to be seated together, Elise Whitt said the manager told them the restaurant’s policy.

“My husband spoke out this time and said, ‘even if we’re from the same family,’” Whitt said. “That’s when she told us, ‘it’s against the law.’ My husband lost his cool and demanded to see the manager.”

Ultimately, the manager told the Whitt family they needed to find somewhere else to eat.

“The manager determined they would be unable to accommodate their needs,” Escobar said.

Elise Whitt said being told it was against the law for the entire family to eat together very hurtful.

When they were turned away from the Cracker Barrel, her children struggled to make sense of it.

“My 13-year-old Luke said, ‘That’s dumb, why can’t we eat here? I don’t understand,” the mother said. “When we go out we often hear, ‘you don’t see big families anymore.’ We are often commended and encouraged by people who see us out and about, especially at restaurants — that we have chosen to have a big family. (Thursday) was the very first time I think any of us felt like it was no longer accepted.”

Whitt said her family felt discriminated against because they were being told sitting together as a family was against the law — when they have yet to see a law published that articulates that.

According to health protocols released by the governor’s office, restaurants in Texas should not have tables of more than six people, as well as other measures. The full list of protocols for restaurants and other businesses can be found here: gov.texas.gov/organization/opentexas.

While the protocols are “recommend,” according to that list, the protocols can be enforced by the Texas Alcoholic Beverage Commission, or TABC.

Escobar said she doesn’t see the restaurant chain as discriminating against anyone, but rather doing everything in their power to follow recommendations and requirements put forth by the state to protect both their staff and patrons to the best of their abilities.

“We tried to call a couple other restaurants to be sure,” Whitt said. “In the end we got Chick-Fil-A through the drive through and came home to eat our lunch.”

Whitt urges residents to research and understand the protocols.

“People don’t even know how to do their research,” Whitt said. “They’re being swarmed with ‘this is how it is, this is what they're telling us to do.’ But we don’t need to be afraid, God is bigger.”

Escobar said Cracker Barrel along with many restaurant chains have experienced health department officials enforcing the requirements as well as the recommendations as if they are law, and for consistency across counties, they have adopted a uniform policy during this phase of the COVID-19 recovery.

However, Elise Whitt said she got conflicting information from the state on the answer.

When she phoned the governor’s office Thursday afternoon, Whitt said they clarified that people from the same household are an exception.

But when she phoned the state health department Friday in an attempt to get further clarification in writing, the answer was different.

She was told “there are no exceptions because they don’t know if it’s from the same family,” Whitt said. “The man said ‘that’s the way it is.’”

Whitt said she was told the recommendation has no exceptions in an effort to promote fairness and not upset the public.

“It prevents people from being able to lie about their party and be an exception,” Whitt said.

But meanwhile, her family is unable to dine out to celebrate a milestone together as a family.

Whitt said the mass of conflicting information circulating feeds the fear felt in the community.

“I’m not scared, but I did feel like it is an attack on bigger families,” Whitt said. “Eventually you’re going to have to choose, big family or a social life. They’re not serving big families anymore right now.”

It must be a slow news day!!

Also, calling the governors off and the state department?? Get over it, Karen!!

What a bunch of entitled a******s. This is trash journalism

Shane on this journalist for acting like this family is suffering and shame on this family for their behavior. The parents were told their party size was a problem at Chili's and saw a manager go clearly out of their way to break a CDC recommendation in order to accommodate them because of the ages of the kid. To then go to a second restaurant, knowing their size is a problem, and still expect to be accommodated is sheer arrogance. They've been provided with valid reasoning for why they can't have what they want and they're still throwing a tantrum.

Not only is this family a squad of Karen’s, the sorry excuse for a journalist or whatever she’s supposed to be is a Karen as well. Oh my gosh, that line about the kids struggling to understand as if they had been through some traumatic life altering advent killed me hahahaha. Get a life you sad, egotistical, entitled people. You too, Erin. This whole thing is a dumpster fire.

This is ridiculous. I have a large family as well, and to feel any sort of entitlement or that your large family is being attacked during this time is just gross, and a bit of a stretch. When we heard of party restrictions at restaurants and state parks, etc, we chalked it up to the stage of precaution we’re currently in.

The restaurant is doing what they and the CDC deem necessary to reduce the risk of the virus spreading. Good on them!

And you already contradicted your idea that large families are being discriminated against...didn’t you say you ate at Chili’s? Obviously you can be served at places that make exceptions; Cracker Barrel just isn’t one of them.

I literally made an account for your website, promptly unsubscribed from your emails, scrolled through my Facebook for ten minutes to find the article again to tell you this is stupid and ridiculous. Instead of acting like they’re being discriminated against they had an opportunity to show their children how to act when something doesn’t go their way. Instead they threw a tantrum. Order for pick up, order delivery. People are dying no one cares that you didn’t get yo burger Karen.

Bruh, just because you had children doesn’t make you queen of the world 😒

In the words of Kourtney K

There are people dying!!!!

Cry me a river. They could have just gotten taje out. No company is going to risk their liquor license over "a big family " with no proof that they are even living together. They were rude to the staff anyway. They need to grow up, they decided to have a big family and they need to be responsible and obey the rules just like any other family. You don't get a free pass sorry not sorry. Yall should really re write this article its just trash. Don't make them some kind of myrters because they couldn't get their way.

You forgot to mention how the couple yelled at and berated the staff who were simply following their guidelines. Wonderful journalism.

What a complete trash excuse of an article. People are STILL dying. Suck it up party of 8.