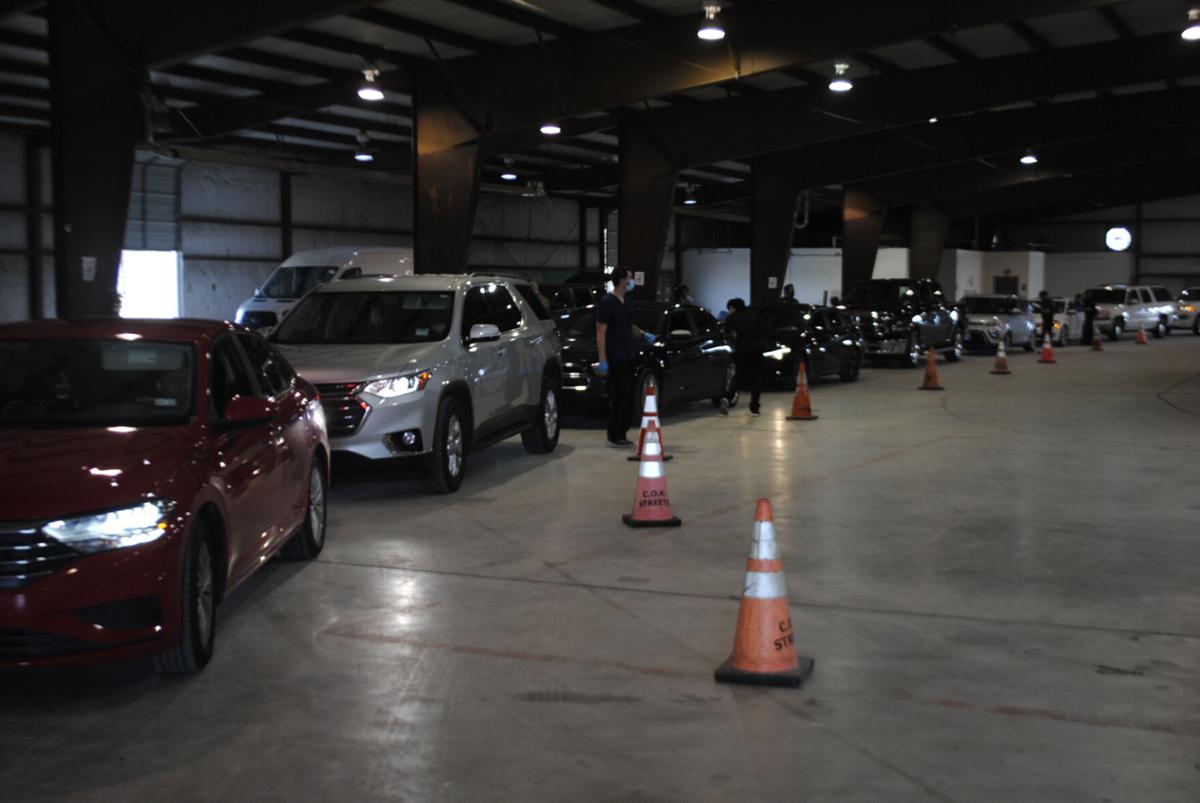 Cars line up to receive their results from the rapid 15-minute PCR test administered at Killeen's COVID-19 testing site Thursday. 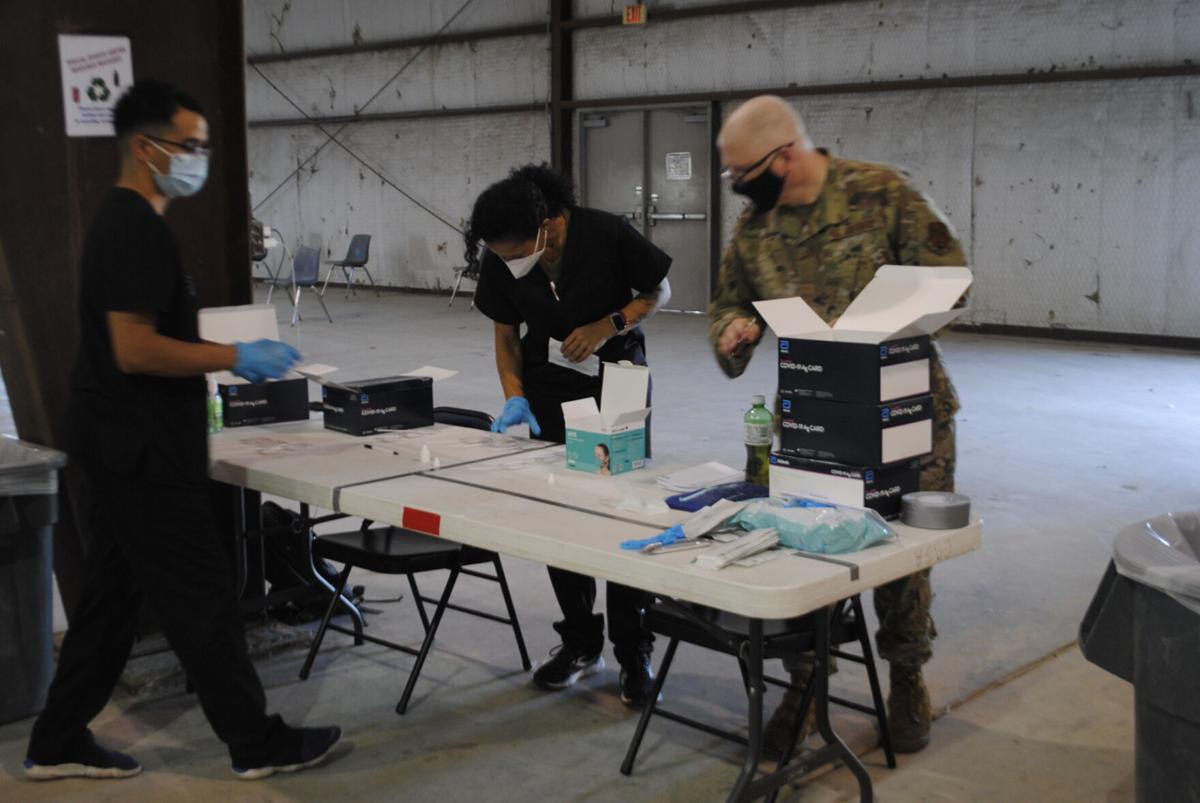 A group of workers prepare COVID-19 testing kits for the drive thru testing center Thursday. 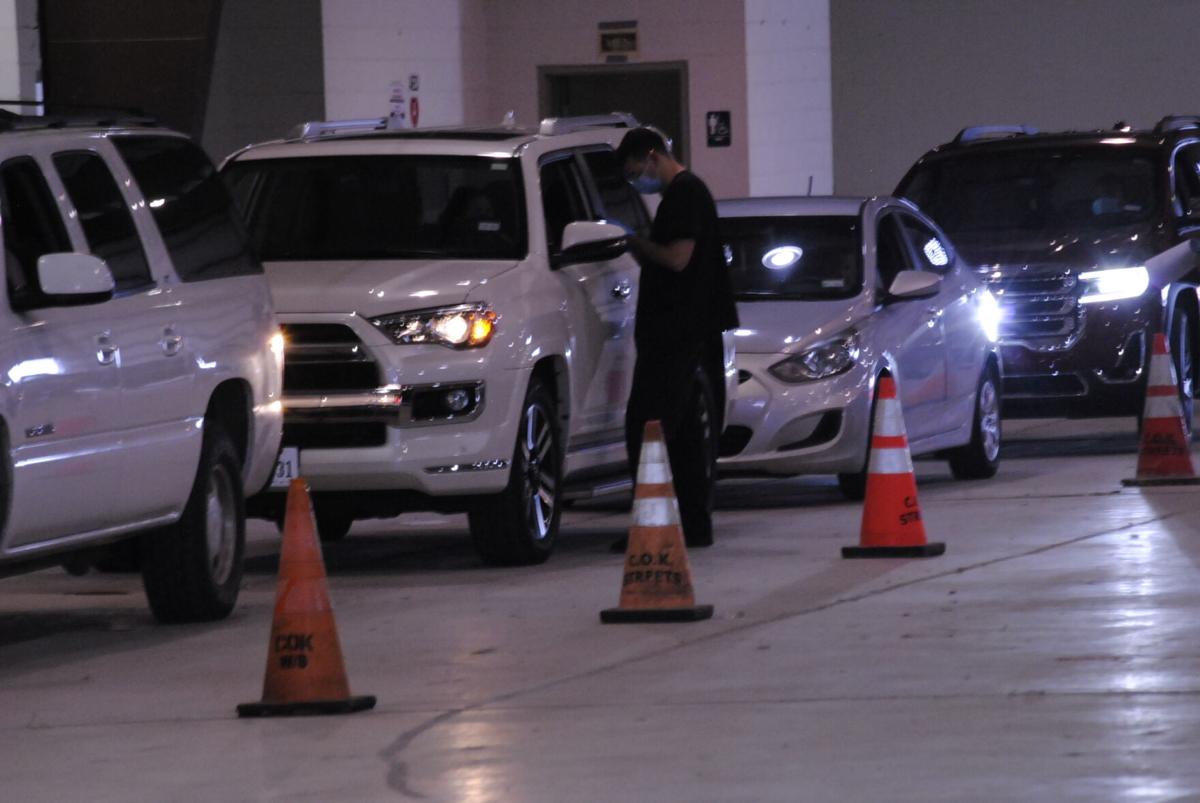 A worker prepares to administer a COVID-19 test at Killeen's testing site Thursday.

Cars line up to receive their results from the rapid 15-minute PCR test administered at Killeen's COVID-19 testing site Thursday.

A group of workers prepare COVID-19 testing kits for the drive thru testing center Thursday.

A worker prepares to administer a COVID-19 test at Killeen's testing site Thursday.

“Something that Bell County public health hears a lot from the community is that it’s difficult to find a place that doesn’t charge for a test,” Perez said.

Perez was thankful, however, that planning the event was fairly straightforward due to it being similar to the drive-thru testing centers Killeen opened in January.

“Planning for this didn’t take too long ... so it was really just coordinating with the state and making sure that we could get on their schedule,” Perez said. “We were able to get this done in a couple of weeks.”

The event was hosted in part, and staffed by, the Texas Military Department, which provided both supplies and manpower for the event.

Speaking to the necessity of the event, Perez said that the event was a partial response to a month-long spike in emergency room visits, a large number of which are unvaccinated individuals.

“All the hospitals we’ve spoken to on a weekly basis, all the emergency managers, they still quote that they’re in the 90%, with that amount of people that are in there for covid, that are unvaccinated,” he said.

Moreover, the event comes after weeks of buildup that have left Killeen’s hospitals strained.

On June 1, city staff recommended the Killeen City Council halt their request for city staff to deliver updates on COVID-19, as cases were declining. Around that time in June, the hospital rate of COVID-19 cases was down to about 3% and the Killeen incident rate was down to 40.25 per 100,000 residents, according to Perez.

But as of July 1, Perez told the city there was a concerning uptick in cases, and that an update should be provided until case counts fall.

Doctors from Scott & White said last week that they were at 130% capacity and did not have 130% staff to handle the number of COVID-19 cases occupying beds.

They have resorted to opening old personal care wards to accommodate the influx of patients being admitted, according to Dr. Stephen Sibbitt, chief medical officer of the Central Texas Region of Baylor Scott & White Health.

The Killeen drive-thru is only one part of a larger solution, however, as Perez says it is necessary for us to “learn to live with COVID-19.”

“The purpose of getting the vaccine, we’re gonna have to live with COVID just like we learned to live with the flu,” Perez said. “With the vaccine, the hope is that you don’t have to go to the hospital when you develop symptoms, it’s something you’re able to take care of at home with over the counter medication.”

There is light at the end of the tunnel, however, as Killeen Fire Chief James Kubinski has stated that hospitalization rates have stabilized.

“We’ve not seen the increases, week over week, that we started to see in the middle of July,” Kubinski said. “Part of the reason for this site is to keep those people who just want to know if they’re positive or not...to come here and not have to go to the ER.”

Kubinski ended the press conference with a short reminder that the Pfeizer booster is available at Killeen’s testing site.

“One final piece for you, with regards to those inquiring about the booster: Those whose doctor has advised are immunocompromised and have received the Pfizer because that’s what’s being given out here is the Pfizer vaccine, the booster has been approved fro immunocompromised persons who are already vaccinated. It’s a very small number of people, but it is available to those who are eligible under the CDC guidelines.”

A local state of disaster for a public health emergency has been declared for the City of Killeen, effective today.

Antigen test look for proteins fragments that resemble pieces of virus. This is another fraud perpetrated on the people because it is a non- specific test that they are using to create numbers. The proteins that it picks up could be the remnants of an older cold or exposure to a cold. The claim is that an antigen tests picks up SARS-COV 2, BUT since the actual virus has never been isolated from an ill person and it's whole form.... ask yourself how it can diagnose?

Governments are using these invalidated tests to continue the narratives.(and to get TAXAPAYER money) cough cough Segarra and Killeen City Council and Bell County)

ALL COVID testing is a SCAM designed to keep the numbers FALSLY HIGH and get you into a system for tracking.

They are not going to treat you anyway, so why would you let them test you?

YOU can catch COVID when vaccinated.

YOU can spread COVID when vaccinated

YOU can increase your risk of SEVERE COVID when vaccinated.

And some of you are signing up for the booster shots ? [rolleyes]

If you ever wondered how they got people to drink poisoned kool-aid, or load themselves up on trains....you’re looking at it.

You want to take an experimental injection being pushed by the same people that made the virus to kill you in the first place, be my guest. I’ll live in the woods before I comply to this tyranny and evil.

Look at all the sheep lining up to be lab rats. Friendly reminder: YOUR body does NOT belong to your EMPLOYER, your SCHOOL, or your GOVERNEMENT..

So these test that are being used, are they the ones the CDC is recalling ? You know the ones that they say are giving false positives and can't distinguish between the flu/fauci flu/ or the common cold ? Those test?