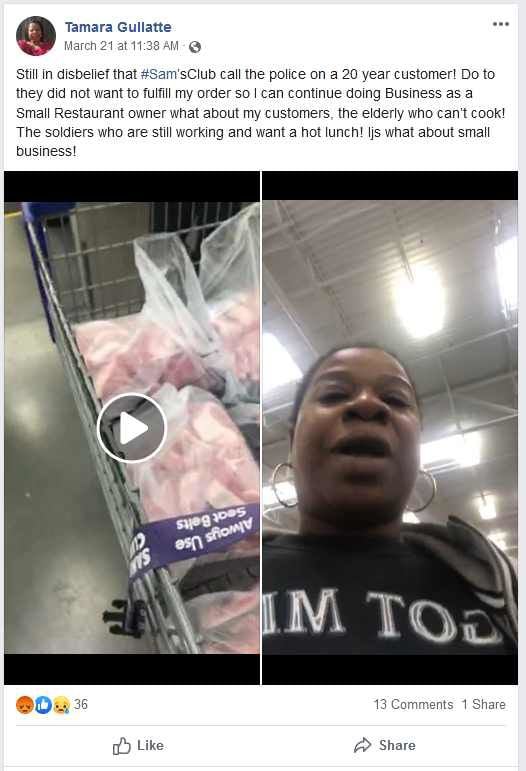 Killeen restaurant owner Tamara Gullatte posted videos of her recent visit to Sam’s Club in Harker Heights. She regularly buys meat for her restaurant at Sam’s Club, but said she was blindsided on Friday when she went to pick up the order she had previously placed in person.

Killeen restaurant owner Tamara Gullatte posted videos of her recent visit to Sam’s Club in Harker Heights. She regularly buys meat for her restaurant at Sam’s Club, but said she was blindsided on Friday when she went to pick up the order she had previously placed in person.

Tensions at grocery retailers are running high as consumers stock up to stay home amid the cornorvirus pandemic. The strain at the grocery stores exponentially impacts both small restaurants and larger families held to a uniform cap on purchasing staple items.

Although she’s been a member of Sam’s Club for more than 20 years, bulk shopping has become an even more regular part of Tamara Gullatte’s routine since opening Sweet Home Alabama Soul Food, a Killeen restaurant, nearly three years ago.

But when Gullatte went in Friday about 11 a.m. to pick up the order she had previously placed in person for eight trays of pork chops, she said whe was shocked and embarrassed at the hassle she was given at the register when she went to pay.

“I went to pick up my order like I normally do, they brought it out and gave it to me like they always do,” Gullatte said. “They told me they were mine and I went to stand in line and pay.”

After pushing her buggy through the line up to the register, Gullatte said a manager came over and told the cashier that there was now a limit in place and only to sell her one package.

“I had placed my order with an associate ... and he guaranteed I would be able to get my pork chops,” Gullatte said. “I asked them to call him and he could verify the information.”

But by that time, the shifts had changed and the associates who filled her order were no longer in the store, she said.

“They must have changed the rule after I placed my order,” Gullatte said. “I thought they should at least honor the order.”

Gullatte said there was no indication of a purchase quantity cap when she placed her order and no posted signage at the time she placed or attempted to pick up her order either.

Calls and emails for this story to Sam’s Club and Walmart corporate offices were not returned this week.

“In order to ensure access to desired products to as many members as possible, we are limiting the purchase of select items that are in high demand,” according to Sam’s Club website

“We are seeing increasing numbers of shoppers in our clubs, and certain items like paper products and cleaning supplies are in high demand,” the website states. “Please know we are working to replenish these items as fast as humanly possible. We’ll continue to work night and day to get these products to you.”

As Gullatte attempted to understand what was happening, the manager called the police to escort her out of the store and threatened to revoke her membership, she said.

“I was calm, I was just trying to get an understanding of why I couldn’t pick up my order,” Gullatte said. “I feel that they don’t have anything in place for small business, and that’s what Sam’s was built on. They treated us like any other regular customers; we’re businesses. I have a business account. But we’re held to the same limitations as regular consumers.”

“Everyone doesn’t want to be out and about and it has put a bit of a strain on my restaurant,” Gullatte said. “But we mostly do carry out anyway, so my business model stays the same.”

Although tensions are high with the uncertainty surrounding the international pandemic, Gullatte said she has worked around the quantity limitations set at all the local grocery stores: showing up half an hour before opening to wait in line and shopping at several different locations.

“Everywhere that I normally shop locally, I’ve gotten what I’ve needed from the store, with the exception of maybe some vegetables,” Gullatte said. “The panic buying does affect me because they put limits on what I can normally get. I have to shop like a normal consumer, but I’m a business. I have to get up early and hunt form store to store to get what I need from day to day.”

Larger families and facilities for foster children are also under additional strain from purchasing caps at grocery stores.

Planning ahead helps keep food on the table at Garden of Central Texas, a nonprofit organization that provides emergency care for children entering the foster system, according to the founder and executive director of Wilfredo Ocasio.

“Right now we’re full to capacity, we have 20 kids,” Ocasio said. “We will probably stay like that for a couple of weeks since the state is overwhelmed with children.”

The nonprofit children’s home tries to give back to the community by using money donated for food to purchase from restaurants that frequently donate surplus food to feed the children housed with them. But for things like milk and other staples, they have to shop on the economy like regular consumers.

“We need more than average,” Ocasio said. “We have a Sam’s Club membership, so we go there in the morning, then hit Walmart or H-E-B at the earliest time possible. We have to stand in line, then we have the same purchase caps as other individuals.”

Ocasio said his wife drove from Harker Heights to Cedar Park, because they heard the H-E-B there may have what they needed.

“She was only able to get 2 gallons of milk, but that helps,” Ocasio said.

John Crutchfield, president of the Greater Killeen Chamber of Commerce suggested restaurants might be better off doing business with wholesalers rather than retail stores.

“Sadly, I know of no other plans to make exceptions for small business,” Crutchfield said. “It would be best for all if the current county order is lifted as soon as possible, which I hope is the plan.”

Gullatte said the altercation at Sam’s Club left her feeling embarrassed and belittled.

“I just think that it was just uncalled for, for them to call the police,” Gullatte said. “I did nothing wrong, they embarrassed me in front of the store. Made me feel like I was targeted. I can’t even step foot in Sam’s anymore. I come so often, everyone knows who I am in the store.”

The grocery stores are trying to keep up with the demand.

H-E-B public affairs spokeswoman Chelsea Thompson said while customers want to prepare by stocking up on the essentials, but they should realize panic buying does not promote progress.

“For the long term, H-E-B is in a good in-stock position on many of the items our customers need and we are working around the clock to restock our shelves,” Thompson said. “To help protect the supply chain in Texas, we’ve implemented temporary purchase limits on certain items. Limiting product purchases and store hours is a proven way to ensure the best service and product availability for all customers.”

Customers might notice supply of some products low or temporarily out of stock, Thompson said, but she encourages them to check back later if they cannot find what they need, as the stores will continue to restock products.

“These purchasing limitations apply to all customers,” Thompson said.

The Killeen Daily Herald asked local restaurants to provide their information if they are open and providing services like delivery, drive-thr…

Why should you not have limited access to vitally needed items? You are a business, buy your groceries through Sysco or PFG like most other businesses. Yes, they're more expensive, but you get a better product. My mom is 83 years old and not able to get out at 7 in the morning. Also, I am not available that early to take her. You are a hoarder and I genuinely hope you go out of business.

I'd just be happy if those greedy MF'ers weren't buying up everything in sight. Especially toilet paper. I have alternatives, but I would like to buy some. I bought a WW-roll at HEB before things got crazy and haven't seen any since. You'd think the stores would put a 1 12-roll limit on purchases so so, rone else can get some. We all aren't able to be at the doors when the stores open.

The only toilet paper I've seen were 2 12-packs at HEB for almost $16. Really? I'd rather go to paper towels. And this is after checking 10 stores.

Get a grip people. And stop being so selfish!

Oops ok I was able to see the rest of the story and will visit her establishment for a sit-down dinner as soon as all this is over. In the meantime, I would say she is yet another victim of the hoarding problem plaguing Killeen and surrounding cities. I have liver fibrosis and need certain things I cannot get now because hoarders ran out buying them. I've been on Zinc for over a year now, ever since this was diagnosed. I can't find it in any of the stores now. I'm having to settle for a lower mg dose that comes in a multi-vitamin to keep it in my system. It's all part of healing my liver. People also hoarded up the NO SALT ADDED canned products as well as brown rice, dried beans, etc. I know for a fact there's NO WAY people in this berg are healthy eaters. So please! If you see these items, think of kidney, liver and heart patients and take the regular stuff if you're healthy. Thank you!