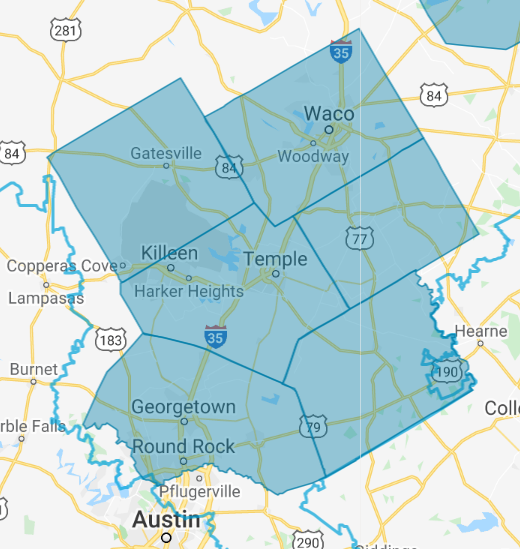 The shaded areas on this map from Oncor show areas in Central Texas that can take advantage of the Texas Power Switch program. (Courtesy/Oncor) 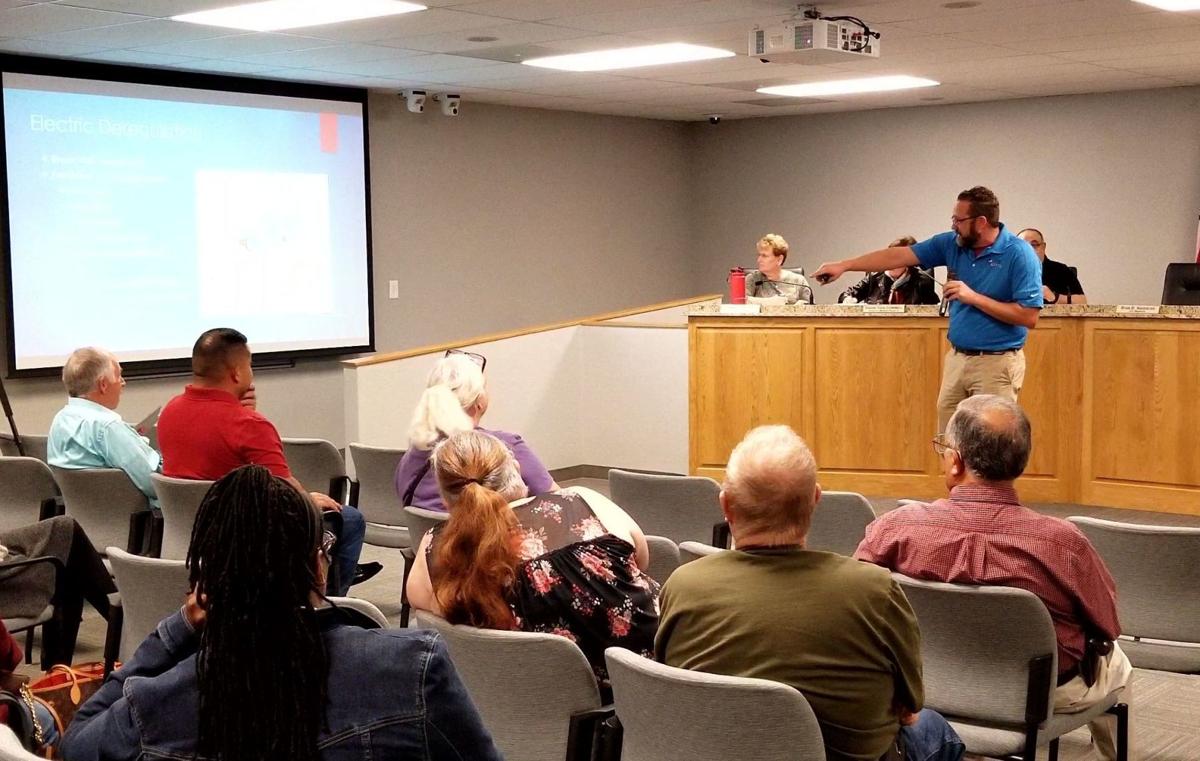 Daniel Nichols of iChoosr makes a point during his presentation on the Texas Power Switch during a town hall in Copperas Cove on Wednesday, Jan. 15, 2020

The shaded areas on this map from Oncor show areas in Central Texas that can take advantage of the Texas Power Switch program. (Courtesy/Oncor)

Daniel Nichols of iChoosr makes a point during his presentation on the Texas Power Switch during a town hall in Copperas Cove on Wednesday, Jan. 15, 2020

The effects the coronavirus pandemic has had on the Texas economy is not lost on Kelle Balch.

Balch is a representative for iChoosr, a company that coordinates electricity auctions to offer cost savings with a program called the Texas Power Switch.

“It’s just a different world,” Balch said, talking about her job before and after the pandemic. “We were bringing in new cities, we were having some great conversations ... the day things just stopped our momentum was the day the NBA said (they were) going to cancel (the season).”

The move on March 11 made the NBA the first American sports league to stop play due to COVID-19. It also brought home to many Americans that the coronavirus was a serious health threat nationwide.

Balch said the cities that her company works with were too busy dealing with COVID-19 in their communities over the last few weeks to focus on much else. But with states and communities moving toward reopening businesses and trying to get back to work, Balch said she is seeing more interest in resuming town halls to inform people about the program.

“(The cities) have now turned their attention to the economic impacts,” Balch said, “and really kind of panicking because citizens are really going to start feeling (it).

iChoosr approaches cities asking them to become partners to help promote the program to their residents. iChoosr doesn’t ask the cities for anything but permission to send mailers to city residents, promotion through the city’s website, and permission and a location to hold town halls for interested city residents.

“It’s going to be a really challenging time for people with their electricity, because not only are kids at home and people working from home, but it’s about to hit summer.”

Balch said that means constant use of air-conditioning units and even higher home electric bills.

WHAT IS TEXAS POWER SWITCH?

iChoosr is an electric power aggregation service. The company negotiates rates with electric power providers on behalf of customers who can take advantage of those rates.

The auction can last for several rounds, but ultimately the lowest rate is brought back and offered to customers in the Texas Power Switch pool.

At that point, it is up to each individual electric user to decide whether they want to take the offer. They can choose to take the rate offered and move their service; they can do more research and try to find a lower rate on their own; or they can choose to do nothing and stay with their current electric provider.

The company does three rate auctions a year. One of the reasons for that is to help members of Texas Power Switch avoid the high cost of early disconnection from their current electric plans. For instance, the next Texas Power Switch auction is May 19. To get the best rate, the program needs everyone interested to be signed up and in the pool by that date. Users have until June 24 to decide whether to take advantage of the offer. Those who choose to take the offer only need to inform iChoosr, and they will work with the winning electric provider to switch service without any further action from the customer.

If a customer can’t take the offer because their disconnection date doesn’t fall within the grace period and they don’t want to pay the disconnection fee, iChoosr asks that customer to contact them so they can try to help.

iChoosr does not charge electric customers any fee for participating in the program, nor does it charge any money to the cities that promote the program. The company makes its money from the electric companies that win the rate auctions, charging them a small amount of money for each kilowatt hour of power they sell to customers that choose to switch.

Any residential customer who can choose their own provider in Texas’ deregulated electric marketplace can take advantage of the Texas Power Switch.

In Central Texas, anyone who is in the Oncor transmission and delivery service area is eligible to be part of the program. According to the Oncor service area boundaries, that area includes all of Bell and Coryell counties and part of Lampasas County. Anyone who is not served by an existing electric co-op or municipal electric service can be part of the Power Switch.

One of the main points that iChoosr emphasizes about the Texas Power Switch is that most electric customers find it hard to navigate the hundreds of electric service offers provided to them in the state’s deregulated marketplace.

According to iChoosr, about 40% of residential electric customers in 10 cities have never switched electric providers after signing up for the first time. The company chalks that up to the confusing nature of the marketplace, which makes shopping for a lower electric rate time-consuming and frustrating. iChoosr believes 60% of Texas electric customers are overpaying for electricity simply because they stick with their current electric provider out of convenience.

According to Balch, a total of 21,000 Texas electric customers are currently signed up for the program. Customers who chose to take advantage of the rate attained in previous auctions saved an average of $425 annually on their electric bill, according to the Texas Power Switch website.

Power Switch officials also emphasize the risk-free nature of the program. No one who signs up for the program is forced to change electric providers and can opt-out of the service at any time.

J.P. Harper, iChoosr’s vice president of North America, also said the company never collects information that could be compromised in a data breach.

“We don’t collect any confidential information,” Harper said, “no Social Security number, there’s no credit card information we collect or anything that could be hacked.

One of the biggest obstacles the Power Switch program has faced is consumer distrust.

Copperas Cove residents were suspicious about the program when the city council first began considering promoting the Texas Power Switch in December of last year. Concerns posted on social media showed that residents feared the program could turn into a situation similar to the city’s dealings with third-party water biller Fathom. Many residents were happy when Fathom terminated its contract with the city last November after three tumultuous years, hoping it would lead to better service and lower water rates.

Those critical of Texas Power Switch were afraid city leaders were creating a situation similar to Fathom that would force customers to change their electric providers.

Harper said that distrust is something iChoosr has had to face in many of the Texas communities where it promotes the Power Switch.

After the city council presentations and a January town hall, around 600 Copperas Cove residents signed up to be part of the program’s auction pool.

Balch called the rates offered at the February “very competitive.” While declining to give the exact rate, she said the flat rate offered by the provider was around 33% lower than the average rate on the day of the auction.

Balch also said that, for the first time, the electric provider that made the lowest bid at the February rate auction offered both a 12-month and a 24-month contract. Around 70% of those electric customers signed up for that auction took the winning bidder’s offer for a 24-month contract.

iChoosr also works closely with winning bidders to ensure certain consumer protections are built into their contracts with Texas Power Switch members. Each company must provide a consistent level of quality electric service to customers. The electric providers cannot charge more than $100 as a disconnect fee if a customer terminates their service.

“We want to make sure that they (the electric providers) have customer service standards (and) service levels that are what we expect,” Balch said.

The Texas Public Utility Commission lists 170 businesses and individuals as electric aggregators, though most are listed as working in the commercial and industrial sectors. Harper said iChoosr is the only power aggregator in Texas working on such a large scale to reduce residential power rates.

Harper believes consumers are going to be looking for ways to save money as Texas emerges from the coronavirus pandemic and tries to recover from the economic impact.

“The amount of electricity that you consume in your house is up right now by about 30% over what it was at this time last year,” Harper said. “This program is for people to save money in their homes. If anything, the benefits of this program are compounded, because ... the more kilowatt hours that you use, the better your savings are, because we provide a lower price per kilowatt hour.”

“I’m guessing that the average annual savings for this year, if you look at energy consumption ... is going to be in the $650 to $700 range,” Harper said. “It’s a significant savings.

“Now more than ever, people are looking to cut bills. This is just another great way for people to save money in time when, unfortunately, we’ve seen one out of ten people lose jobs.”

While the coronavirus emergency will prevent iChoosr from holding in-person town halls before the next auction, Balch said that there won’t be city-specific town halls. Instead, anyone who is interested in hearing about the program will be invited to participate.

“If you live in a deregulated area, I want you to know about the program,” Balch said