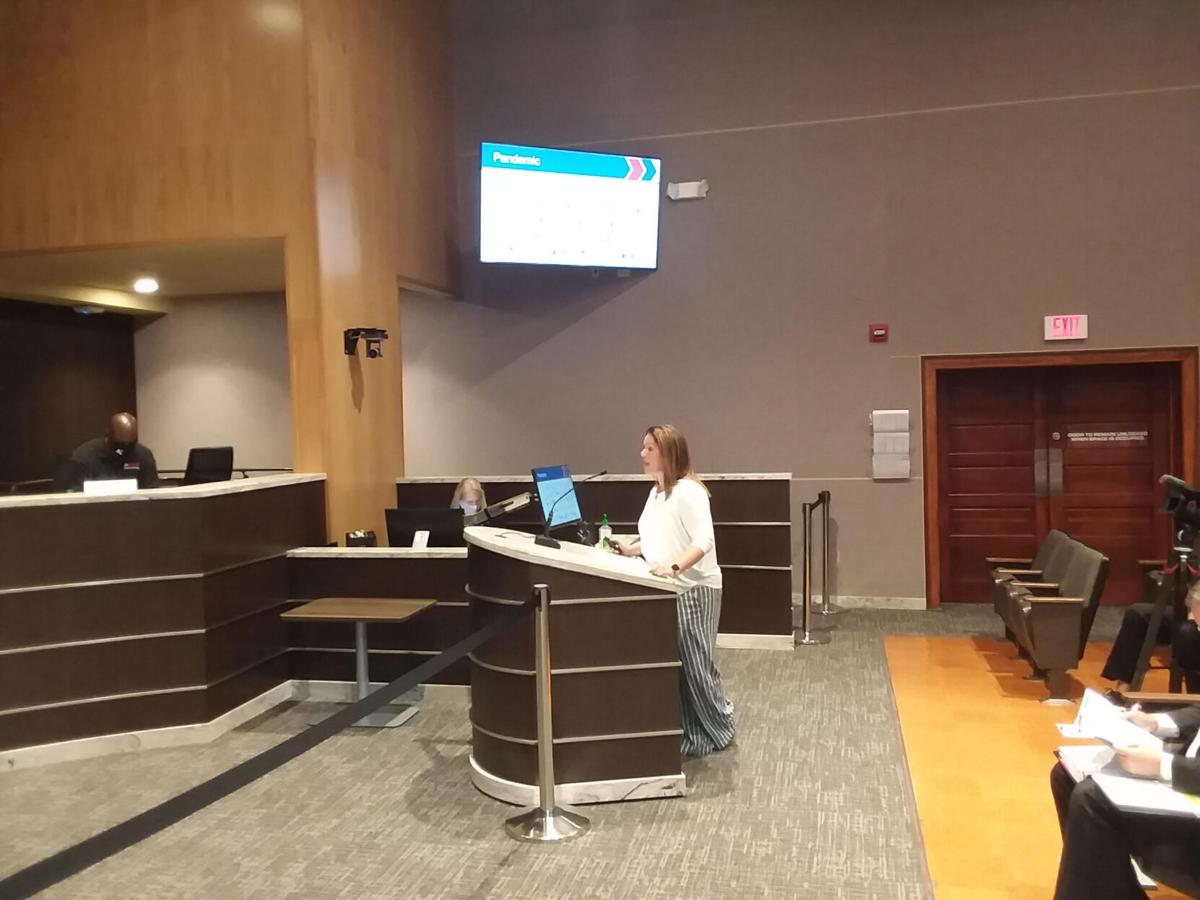 Greater Killeen Chamber of Commerce Chair Meredith Viguers gave a presentation on the chamber’s work to the Killeen City Council at their Tuesday workshop. 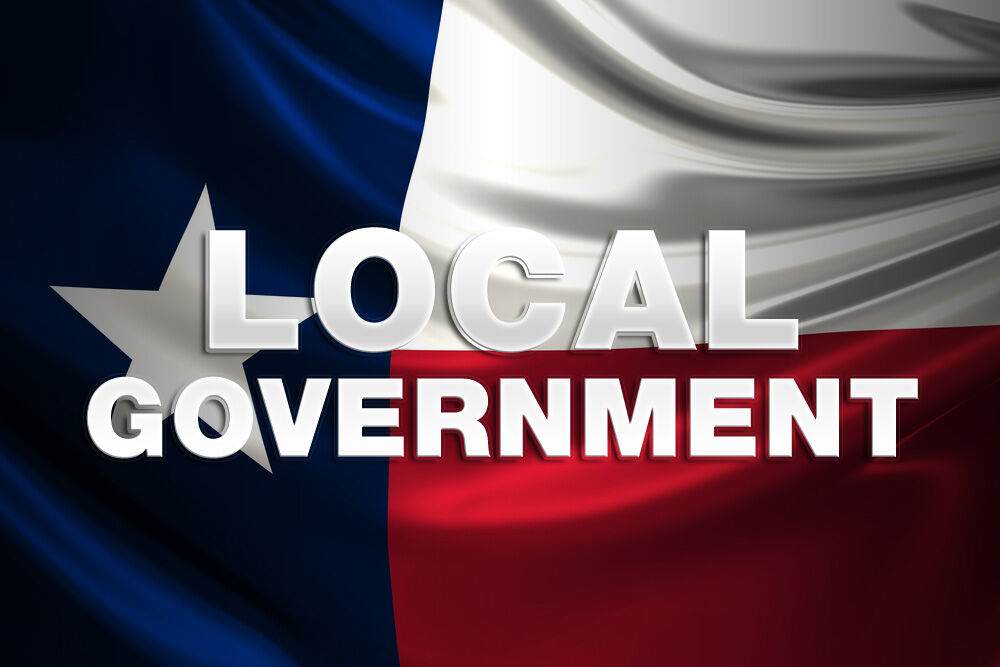 Greater Killeen Chamber of Commerce Chair Meredith Viguers gave a presentation on the chamber’s work to the Killeen City Council at their Tuesday workshop.

The revised relationship between the Killeen Economic Development Corporation and the Greater Killeen Chamber of Commerce was a point of spirited discussion at Tuesday’s Killeen City Council workshop.

Representatives of both the KEDC and the Greater Killeen Chamber of Commerce gave presentations at the workshop, and Planning and Development Services Director Tony McIlwain gave a separate presentation on the KEDC near the end of the workshop.

The council agreed to keep the vote to continue funding for KEDC on the agenda for its upcoming Sept. 22 meeting.

The amount of funding proposed is $725,054, but this year, for the first time, the entire sum will go to the KEDC, and officially none to the chamber, which is now separate from the KEDC per a vote the council made last year.

The stated purpose of the KEDC is to act on behalf of the City of Killeen in the promotion and development of commercial, industrial and manufacturing enterprises and to promote and encourage employment and public welfare, according to its website.

Kirkpatrick noted the rate of return that KEDC brings in to the local economy.- how for every dollar generated by Killeen, $1.95 in matching funds are brought in by KEDC, a nearly two to one return.

The presentation by Kilpatrick focused on current and future/proposed KEDC projects, such as the Boys & Girls Clubs of Central Texas, the National Mounted Warfare, Z Modular, First National Bank of Texas,

He also noted the KEDC’s investment in the Texas A&M Scholarship Fund.

“Many are going to school here and staying,” he said.

Council members Shirley Fleming and Jose Segarra are also members of the KDEC board of directors.

Meredith Viguers, chair of the board for the chamber, spoke about efforts the chamber is involved in, including business support, military relations and 14 Forward, which is a strategic economic development initiative of the chamber.

“KEDC work is contracted to the chamber, but all funding is used for economic development,” Viguers said after the presentation,

Councilmember Steve Harris raised a number of points, the first being in regards to a perceived increase in the amount of KEDC funding from last year.

However, it was pointed out that the difference is that amount previously going to the chamber is also now going to the EDC.

Harris also asked about the southern corridor of Killeen, and specifically how companies that don’t fit in with the guidelines of the proposed research park would fit it.

Kirkpatrick replied that KEDC has no objections to such companies but noted that they will want incentives to establish themselves into the area.

Harris asked what KDEC has to do with airport-related growth, and if airport staff helps with the grant process.

Kilpatrick responded that KEDC works with the director of aviation and with the universities, and that Killeen is competing with 42,000 other municipalities for related grants.

Harris raised an additional concern about dues being paid to the chamber, to which Viguers replied that additional funding beyond member dues allows the chamber to sponsor programs such as recruiting, reports, webinars and additional services.

“KEDC work is contracted to the chamber but all funding is used for economic development,” Viguers said.

Council member Gregory Johnson wanted more specifics to better understand the ambiguous nature of who works directly for the KEDC and who works for the chamber, noting that the KEDC President John Crutchfield is also the chamber secretary.

“That’s one of the things that makes it hard to evaluate, because I don’t know who’s who,” Johnson said, a point with which Harris concurred.

With respect to the apparent overlap between the KEDC and the chamber, Cagle said that salaries for the chamber are still funded by the city, although not 100 percent, as the chamber has its own resources.

In other action Tuesday, the council considered memorandums or resolutions on a number of items, including accepting TxDOT Routine Airport Maintenance Program (RAMP) grants, rejecting bids received for Bid No. 20-23, Uniform Cleaning Services, approving an Intergovernmental Support Agreement with the U.S. Army Garrison at Fort Hood and an amendment to the current Interlocal Agreement with Bell County for the purchase of Security Surveillance Equipment at Robert Gray Army Airfield in an amount not to exceed $660,000. and others.

As its last item, the council reached a consensus to hold a special meeting on Nov. 12 for the purpose of swearing in newly elected council members from the Nov. 3 election.

The consensus vote was 5-2, with Kilpatrick and Fleming in opposition.

The Killeen City Council is expected to vote Tuesday on an annual agreement with the Killeen Economic Development Corporation, which includes …

I have no idea what you are talking about. 'Flow potable water before laying new streets'? 'Leave your conscience at church'?

I hear you talking and I feel your plight, but nothing is going to be done until they stop robbing he water and sewer General account every year and stop trying to use water bonds to capture capital money for maintenance of water and sewer transmission lines. It's not enough that we are paying a sewer fee when it not allowed for these lines are supposed to be covered under Eminent Domain so it should be covered by this. But no we are building streets, laying piping, both potable water and sewer lines for county property that is outside of the city limits. So I hear you and I am trying to get some changes.

Vote for what we actually need here. Leave your conscience at church. Either way I have no doubt it will happen.

I would appreciate knowing that some of this going toward the water situation in this city. Knowing it's been shut off for so many every single day and then to boil it, every single day for residents that may not even know because they read the news. Kileen is basically a petri dish for those that don't read first about the news every day to boil your water.