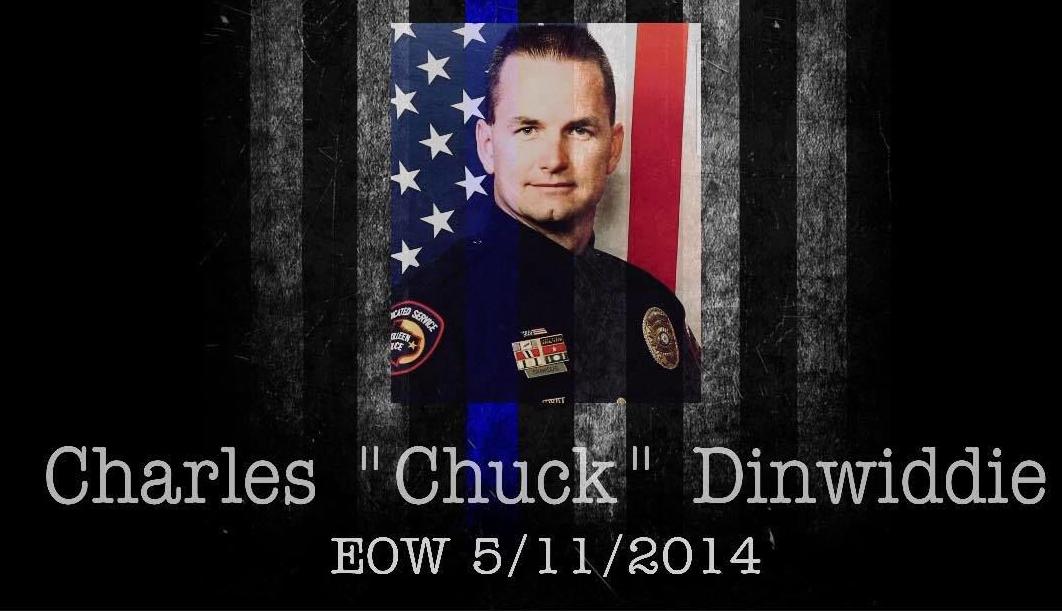 The Killeen Police Department posted on its Facebook page Monday this image of Charles “Chuck” Dinwiddie, a KPD detective and SWAT team leader who died in the line of duty on May 11, 2014. 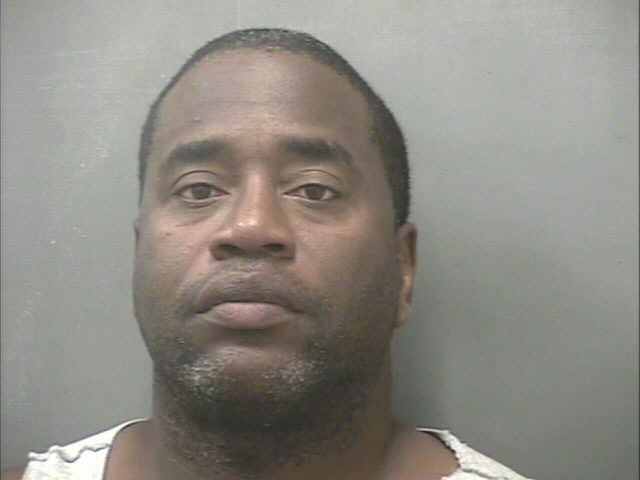 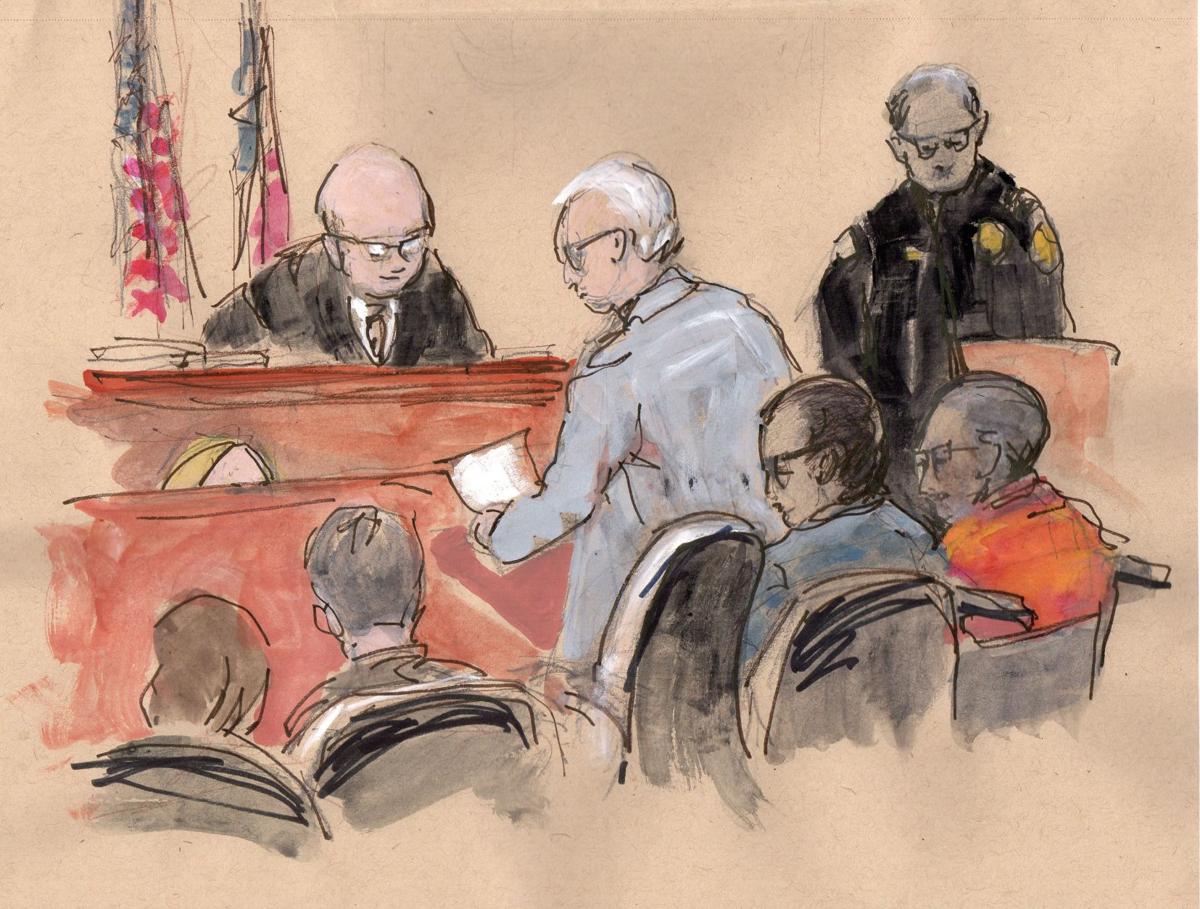 Attorneys and Marvin Guy appear before Judge John Gauntt during a pretrial hearing in Belton in November 2019.

Six years have passed since a Killeen Police Department detective and SWAT leader died after being shot during a no-knock raid on a suspected drug dealer, while the capital murder case remains in limbo with no trial date scheduled.

“Today, we pause to remember and honor Charles “Chuck” Dinwiddie who made the ultimate sacrifice while serving our community,” posted the Killeen Police Department on Facebook on Monday, the anniversary of his death on May 11, 2014. “His memory will live on in his family and in the many lives that he touched.”

Dinwiddie died in a hospital two days after the shooting on May 9, 2014.

Guy has said that he did not know it was police officers who were entering the apartment and that he fired in self-defense during the 5 a.m. raid at his home on Circle M Drive.

Other SWAT officers were wounded during the raid.

Three trial dates have been set and nixed in the case so far, most recently for March 23.

The last hearing on the case was on Jan. 14, at which time Guy’s defense attorney said that his client would be having surgery after Baylor Scott & White neurologists diagnosed a degenerative spinal condition.

No new pretrial hearings or a trial date have been set.

“I do not have a current court setting for this case,” Jessica Bridge, court coordinator for the 27th Judicial District, said on Monday.

No new motions have been filed in the case since a defense “motion for medical continuance based on physical incapacity and need for medical treatment” was filed on Dec. 12, 2019, according to the Bell County District Clerk’s Office on Monday.

Judge John Gauntt granted the defense’s motion at a hearing that same day.

“In the summer of 2018, Guy began to complain about pain and numbness in his hands,” according to the Dec. 12, 2019, motion that was obtained by the Herald.

The condition worsened over time with more symptoms and if left untreated could have led to paralysis, according to Guy’s attorneys in the motion.

Attorneys are barred from speaking about the case, aside from courtroom hearings that are public, because of a gag order imposed by Gauntt in 2015.

Well just maybe if swat didn't violate your right to property and privacy stuff like this wouldn't happen. HOWEVER if Guys being held for killing an officer prior to that would be the reason he is still in there. The article isn't clear on that. If he is being held solely for shooting this SWAT officer that officer was an intruder. Also what happened to the right to a speedy trial? Sure this SWAT officer was only doing his job but many times SWAT get all pumped up to go blasting down doors and they do it when people are asleep wtf do they think is going to happen when you startle someone and they have children they are protecting? What would a SWAT officer do if someone came unannounced tearing down their door when they are sleeping. I also like how all of a sudden Degenerative Disc Desease is a sudden onset almost immediately resulting in paralysis. Lol gtfo. Meanwhile Americans suffer in the millions in pain and not a one of us are getting ANY help yet inmates are getting prime personalized and fabricated health care to get him out. Perhaps this is where I need to be in order to get treatment. I have DDD and I can tell you it takes years if not decades to get to paralysis which is rare in itself. So I have very mixed feelings in this one. Ide like to see his pros for which they came and blasted their way into his home.

They came in his home looking for drugs because a confidential informant told them there was cocaine present in the home of which they found none. His prior background is not the issue the issue is really self defense Henry Mcgee(not sure if I spelled his last name correctly) was charged with killing an officer and was facing capital murder charges that were dropped as the judge sided with self defense(both cases similar in nature no knock raid office dead) even though they did find drugs(marijuana 4 Ozs but less than 5 pounds) capital murder of the table. Both admitted to their parts on has been locked up since 2014 guess who

It has been long enough and this is why protest..this is why we fight.. this is why we feel our lives don't matter. Marvin Guy had NO drugs in his home..NO surveillance of drug buys..NO controlled buys from narcotics officers/C.I.'s..ONLY the word of an informant involved in another drug sting that was to be executed directly AFTER Marvin Guys house further down the street of Circle M drive. KPD botched the illegal raid of Marvin Guys residence so bad the secondary raid to be carried out by Bell County Task Force on the second targeted residence was called off. Prosecutor Henry Garza has lied to the family of the slain officer..Judge Gauntt has gag ordered this injustice and Bell cnty. Jail continues to hold this man illegally without concerns of his Constitutional rights..his rights of habius corpus.. speedy trial.. un-lawful detainment etc.

1Revolution, this has nothing to do with race. This has to do with unwarranted search and seizure, as well as plain civil rights violation. No one should ever be allowed to enter a residence unannounced - PERIOD.

BULL! Release this man! You go sneaking into any house in Texas, in the middle of the night, this is what you get. Was suppose to wait and ask the home invaders if they were cops? Of course not. The moron that cooked up this plan, and the others who approved of it, need to be charged with the death of the policeman. I am a 62 year old white male, with no criminal history. That man did the same thing I would have, he protected his home from unidentified home invaders. Idiots are among us, and one is dead. Prosecutors, quit trying to lay the blame on someone else.

Who is paying for the medical treatment? Is this another load on the taxpayers? A five year old gag order is another crock in the finagling of this case! It's time to get on with it. This case stinks more than a barrel full of skunks!