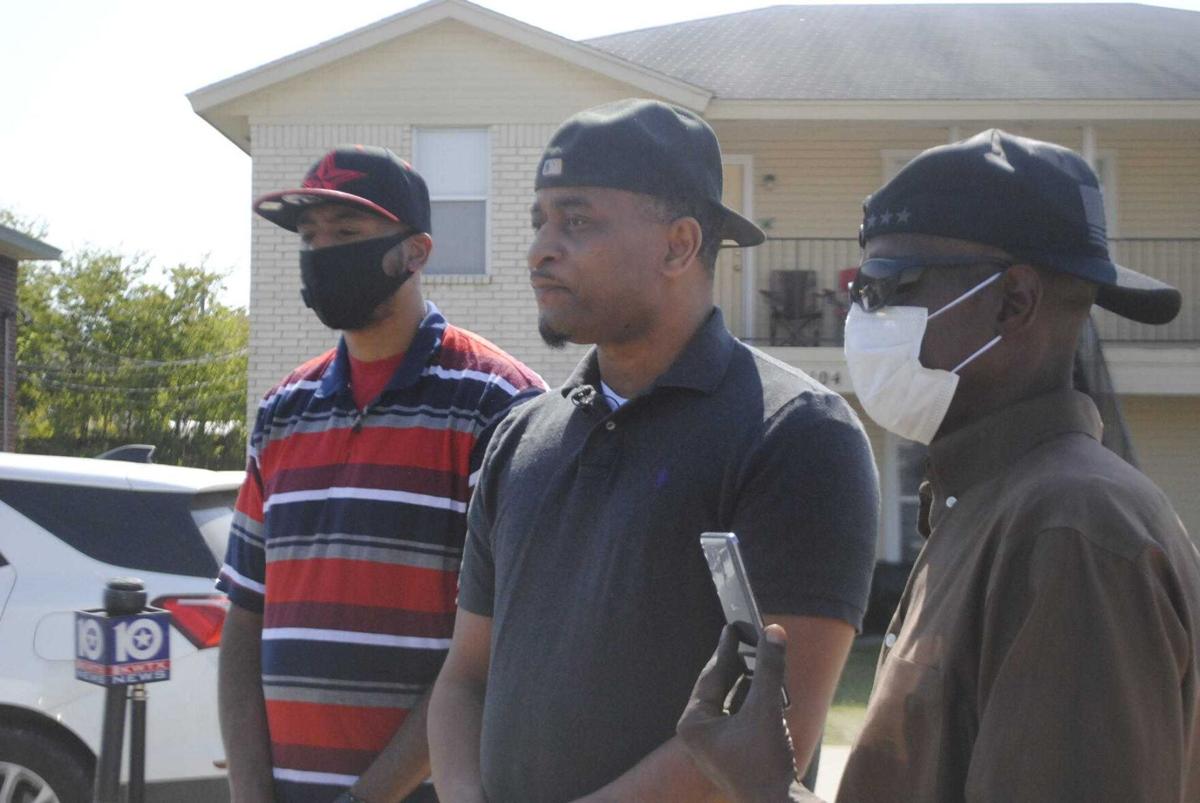 Garett Galloway, flanked by his brothers Sidney Galloway, at right, and Bryant Green, spoke to the news media about their brother, Marvin Louis Guy, who is charged with murder following a no knock raid by the Killeen Police Department in 2014. 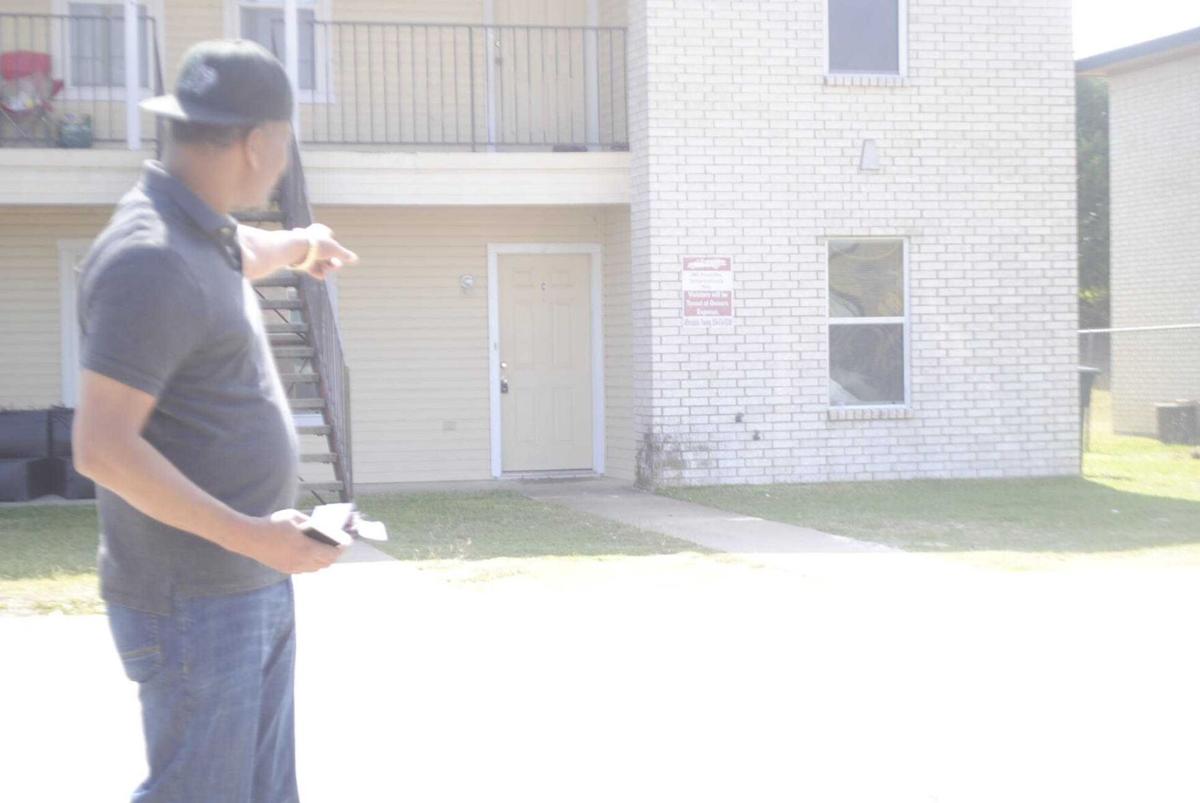 Garett Galloway points to the apartment where the no knock raid to place in 2014, leading to his brother, Marvin Louis Guy, being charged with the murder of a Killeen Police officer.

Garett Galloway, flanked by his brothers Sidney Galloway, at right, and Bryant Green, spoke to the news media about their brother, Marvin Louis Guy, who is charged with murder following a no knock raid by the Killeen Police Department in 2014.

Garett Galloway points to the apartment where the no knock raid to place in 2014, leading to his brother, Marvin Louis Guy, being charged with the murder of a Killeen Police officer.

In a heartfelt news conference on Thursday afternoon, yards away from where gunfire rang out more than six years ago, the family of a Killeen man charged with killing a Killeen Police Department detective during a no-knock raid in 2014 spoke out about the case.

“My brother has not received adequate justice,” Garett Galloway, brother of Marvin Louis Guy, told reporters on Thursday. It was the first the family had held a news conference about the case, which has been lingering in the Bell County Courthouse without a trial for six and half years.

Guy, 55, is accused of shooting and killing KPD SWAT officer and Det. Charles “Chuck” Dinwiddie during a no-knock raid over suspected narcotics activity at Guy’s home on Circle M Drive on May 9, 2014. Dinwiddie, 47 at the time, died in a hospital two days later.

Guy has said that he did not know it was police officers who were entering the apartment and that he fired in self-defense during the 5 a.m. no-knock raid at his home, and other SWAT officers were wounded during the raid.

Galloway said his brother’s girlfriend was in the residence at the time, but could provide no specifics.

Speaking Thursday outside the Circle M residence where the no-knock raid took place, along with two other brothers of Marvin Guy, Galloway called for a change of venue in his brother’s case, as well as the appointment of a special prosecutor.

“No drugs was found, but yet he’s still in jail for six and a half years — what kind of justice is that?” Galloway asked, adding that he understands that investigators searched for up to two days and found no illegal narcotics. “I believe he has no trust in the justice system.”

Initially, Galloway said that he tried to stand back and let the justice system work, but made it clear that he feels differently now.

“With six and a half years going past it seems like nothing’s happening,” he said, taking note of the national debate about no-knock warrants. “That’s why I feel like the time is now, with all that’s going on right now.”

He also confirmed the allegation that an officer placed a gun in his brother’s mouth during the raid, even after his brother had been trying to surrender.

Galloway said the use of no-knock warrants, an issue of national controversy at the moment, needs to be revaluated and the practice ultimately done away with. He further believes if police had knocked on his brother’s door that morning in 2014, things would have turned out differently.

“Re-look at your policy and look at ending it all,” Galloway said. “The time is now.”

KPD amended its no-knock policy earlier this month, saying it will no longer do no-knock warrants on narcotics-only cases.

Galloway indicated that he does not have much faith in the public defenders who have been appointed to defend his brother in court.

“If I had the money to put on a legal team, but I just don’t have the money to hire proper legal representation,” Galloway said, adding that his earlier defense attorneys had hidden or changed evidence, and that Guy had dismissed several of his previous attorneys and lawyers for not telling the truth about aspects of his case.

When asked his thoughts of what happens if Guy is found not guilty, Galloway offered two viewpoints.

“If he’s found not guilty, one side, that would be relief, but I know a life was lost and I sympathize with the young lady who lost her husband,” he said.

Trial dates have been scheduled, and canceled, three times in the case.

“I believe they haven’t had the trial because they don’t have everything lined up,” Galloway said.

On Oct. 27, Guys’ 56th birthday, Galloway said a protest will take place outside the Bell County Jail Complex to show support for Guy, for ending no-knock raids and to show that “all lives matter.”

“His spirits are well,” Galloway said of his brother. “We talk mostly every day, but he believes that he’s not getting adequate representation from the legal system with the public defenders.”