Killeen police investigated a homicide in the 800 block of Root Avenue in April 2018. 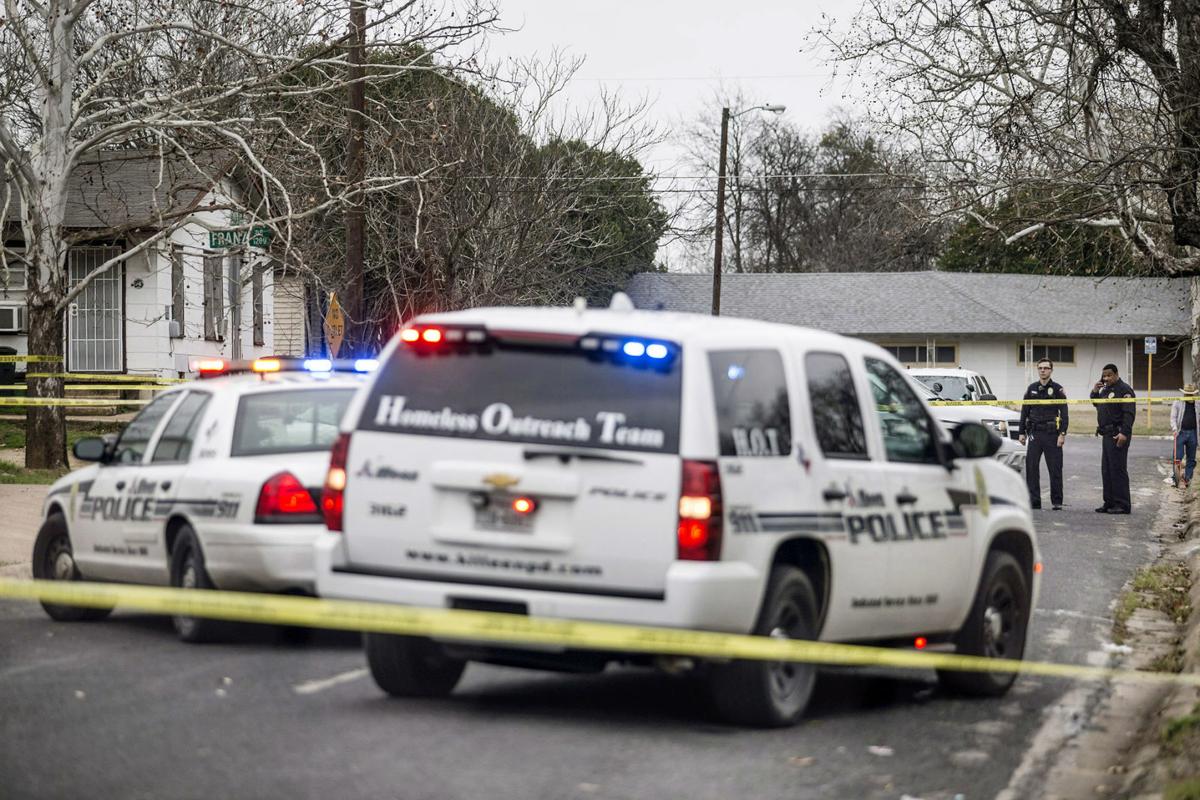 Killeen police investigate a homicide in the 900 block of Culp Avenue Wednesday, February 28, 2018.

Killeen police investigated a homicide in the 800 block of Root Avenue in April 2018.

Killeen police investigate a homicide in the 900 block of Culp Avenue Wednesday, February 28, 2018.

On Jan. 1, 2018, the city of Killeen was turning the page on its deadliest 12 months in 26 years as violent crime continued a troubling upward trend.

With 18 criminal homicides and a violent crime rate nearly double the national average in 2017, crime was the main target for residents and civic leaders. City council members held routine crime meetings and residents flocked to the Killeen Police Department’s biennial crime forums to voice their frustrations.

In April 2018, there was encouraging news. KPD statistics showed violent crime incidents in Killeen were down 36 percent from December to February in comparison to the same period in 2016-17. The department said it recorded just 46 violent incidents in February — the lowest amount since at least January 2016. The most violent incidents reported during that span was 123 in May 2017.

As 2018 drew to a close, just seven criminal homicides have been reported. The reason? New leadership at the department and renewed buy-in from Killeen residents who have said, enough is enough.

To tackle the high murder rate in 2017, the department leaned on the leadership of Chief Charles “Chuck” Kimble, who was hired on with the city Sept. 1, 2017.

In turn, Kimble has praised the work of a new “intelligence manager,” Rebekah Lueck, who has helped provide detailed analysis of high-crime areas to help patrol officers better target areas where crimes most often occur.

Those factors have seen strong results on the streets, but continuing to keep crime in check will require maintaining and building the infrastructure Kimble has helped put in place.

Kimble said Lueck’s expertise has helped to get the homicide rate down. She joined the department in July.

“Rebekah puts everything into a statistical framework so we can see what’s going on,” he said. “So we have broad data about where crimes are happening and who the victims are. That’s helped us.”

The homicide clearance rate for 2017 was 42.9 percent, Lueck said. Clearance rates include cases the department passes off to the district attorney for prosecution, or are cleared by “extraordinary means,” such as the death of the primary suspect, according to the FBI.

Lueck said the clearance rate for murders is 57 percent in 2018.

As of Dec. 29, there have been seven confirmed homicides — a 61 percent decrease from the 18 homicides the year before. The 2018 number doesn’t include a Dec. 20 fatal shooting police are investigating.

Part 1 crimes, according to the FBI, include criminal homicides, rapes, robberies, aggravated assaults, larcenies, vehicle theft and arsons. The rate in 2016 was 17 percent.

To tackle those rates, Lueck has helped to provide detailed analysis to support the department and its investigations, she said.

“Every day we’ll look at the statistics and maps to determine patrol routes and where to place officers,” she said. “Crime analysis is the force multiplier. It’s phenomenal what we can do with what we have.”

Lueck has been working in law enforcement for five years and prior that was in the Army, where she learned her analytical skills.

“Homicides cannot be predicted from a crime analysis perspective,” she said. “It’s a violent crime that occurs when it occurs, but it’s possible to note certain events like a gang conflict that could create a perfect storm for a homicide to occur. But the numbers do fluctuate all over the place.”

A report from the U.S. Department of Justice commissioned by Killeen police confirms the typical fluctuations of criminal homicides to which Lueck alluded.

The federal government was asked to crunch the department’s stats soon after Kimble’s arrival, when he said he was looking for an objective accounting of crime in the city.

The final report, concluded in 2018, revealed a few trends in the city’s homicide rates.

Thirty-seven percent of victims either were involved in the drug trade or gangs and nearly half of homicides could be traced to arguments or domestic violence.

Steps to a solution

Apart from precise data, Lueck credits hard work for the reduction in violent crime — including homicides.

“I watch these detectives put in a lot of time and effort, so it’s a combination of hard work, crime analysis and targeted efforts such as getting rid of some of the gang presence in the city,” she said.

Kimble also heralded the work of his detectives in tackling crime.

“Sometimes people forget that all these numbers have people connected to them: the person who was killed has a family, the person arrested for murder has a family, and our officers have families,” Kimble said. “It’s not easy to deal with people in their worst moments, so detectives have to work through the emotions of people around them, and their own personal emotions.”

Kimble said detectives always are looking at cold cases, but it’s difficult to find the time because of staffing challenges.

“It’s well-known that we’ve put a lot of resources into patrol, developing leads and shaking the bushes. We’ll always need as much help as we can get so we can help more people. We help as many as we can but we can’t do it at the rate that we want.”

Soon after Kimble’s first day on the job, he realized the department needed to focus, which is one reason for the Tuesday meetings for staff and commanders to discuss and analyze crime that week.

“One of my commanders said that we’ve never looked at crime on a micro level before,” Kimble said.

There was a flurry of action in October 2017, as the department unleashed a number of SWAT raids to target violent criminals.

“Since October of last year we’ve focused on the worst of the worst in the community, people who use weapons in their crimes, and that has had an impact on the violent crime rate and homicide rate,” Kimble said. “The case load (at federal court) in Waco has increased substantially.”

Even though homicides are unpredictable, Kimble said the department tries to take preventative measures.

“We try to intervene as much as we can, especially with people who are victims of violence in domestic situations,” Kimble said. “Our officers can identify people who are caught up in that cycle of abuse. You have passionate police officers and professionals working to reduce the number of victims and then to help victims.”

Officers on Dec. 6 arrested three people they accused of shooting and killing 21-year-old Demps on Root Avenue in north Killeen.

“It was about a 50-hour turnaround, with a lot of cooperation from the community and good police work,” Kimble said Dec. 18. A CrimeStoppers tip broke the case wide open and police moved in to arrest and charge a woman and two men with murder in the case.

The site of Demps shooting is just a few blocks from where Otto “Otts” Hernandez, 35, was killed in April. No arrests have been made in the Hernandez case. A lack of witnesses has made solving the Hernandez homicide difficult, Kimble said.

“It’s always a challenge for our detectives because a person who has been killed can’t tell their own story, which is why we need citizen cooperation. We need witnesses to solve these crimes,” he said.

Police are investigating the Michaels-Toms’ fatal shooting as a death investigation at this point. Michaels-Toms, 24, was shot and killed at an apartment in the 4500 block of Westcliff Road in Killeen.

Police have released few details about the case.

According to police reports, officers were responding to a burglary call when they found Michaels-Toms suffering from a gunshot wound, but Michaels-Toms’ family said there is more to the case than has been released publicly.

On Wednesday, Michaels-Tom’s family, including his parents, Renee Michaels and Charles Toms, and stepmother Rhonda Toms said Michaels-Toms had no previous criminal history and had never spoken of problems with anyone.

He had recently passed a criminal background check for his job at Blackboard, which he started just a few weeks ago, the parents said. Prior to that, he was working two jobs — at Teleperformance and Smoothie King.

“If anyone has information about anyone who may have been involved, or anyone who was there, please reach out,” Rhonda Toms said.