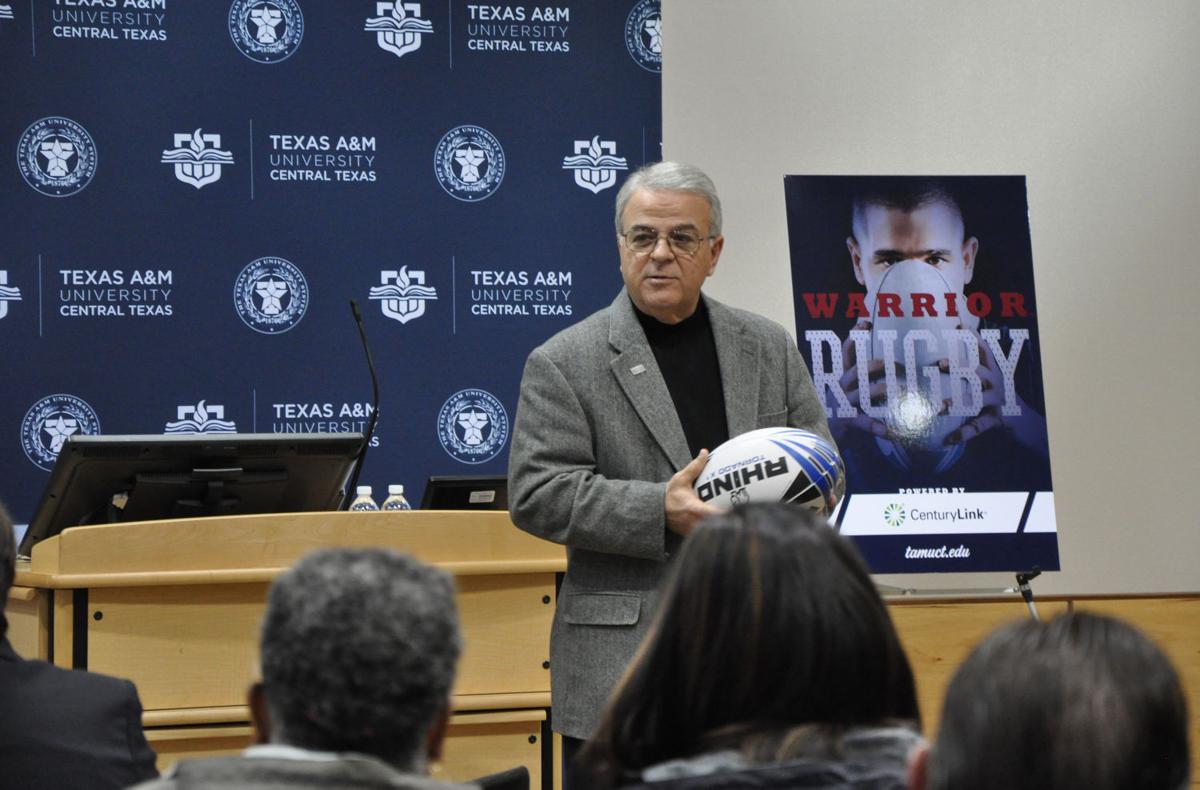 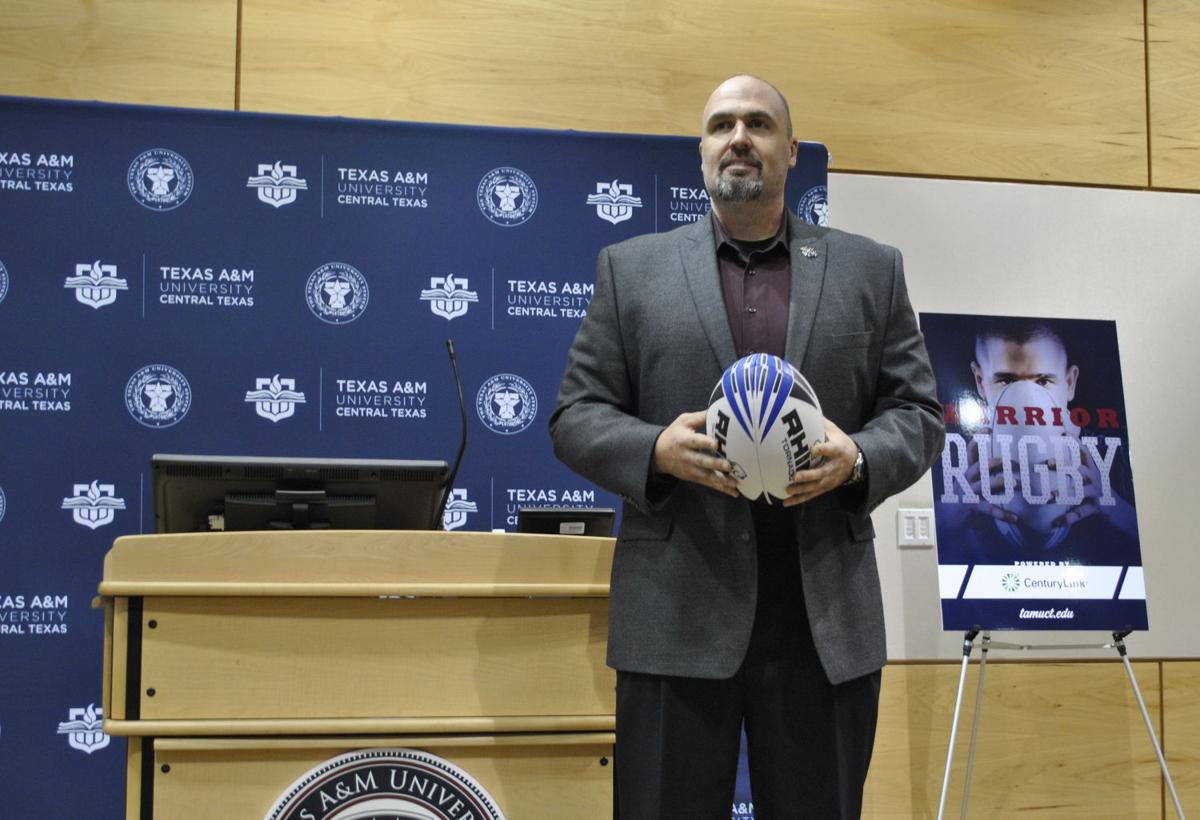 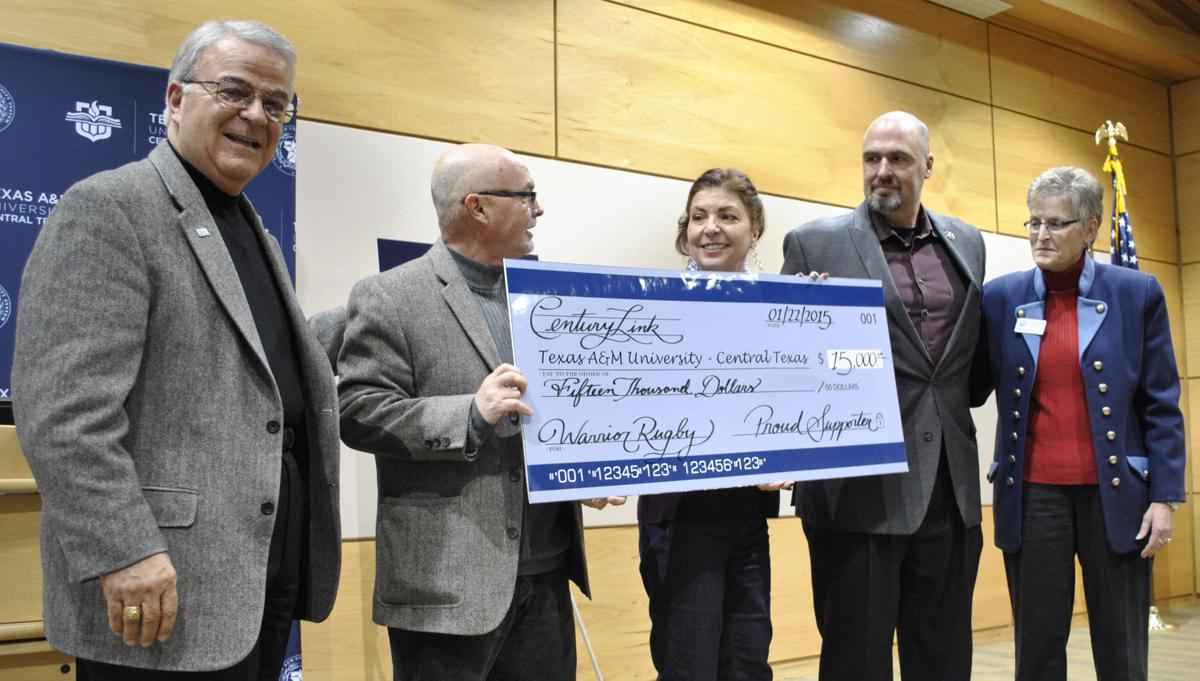 Steve Hanik, second left, CenturyLink's regional market development in Killeen presents $15,000 to Texas A&M University Central Texas staff to be used to get its rugby team off the ground. 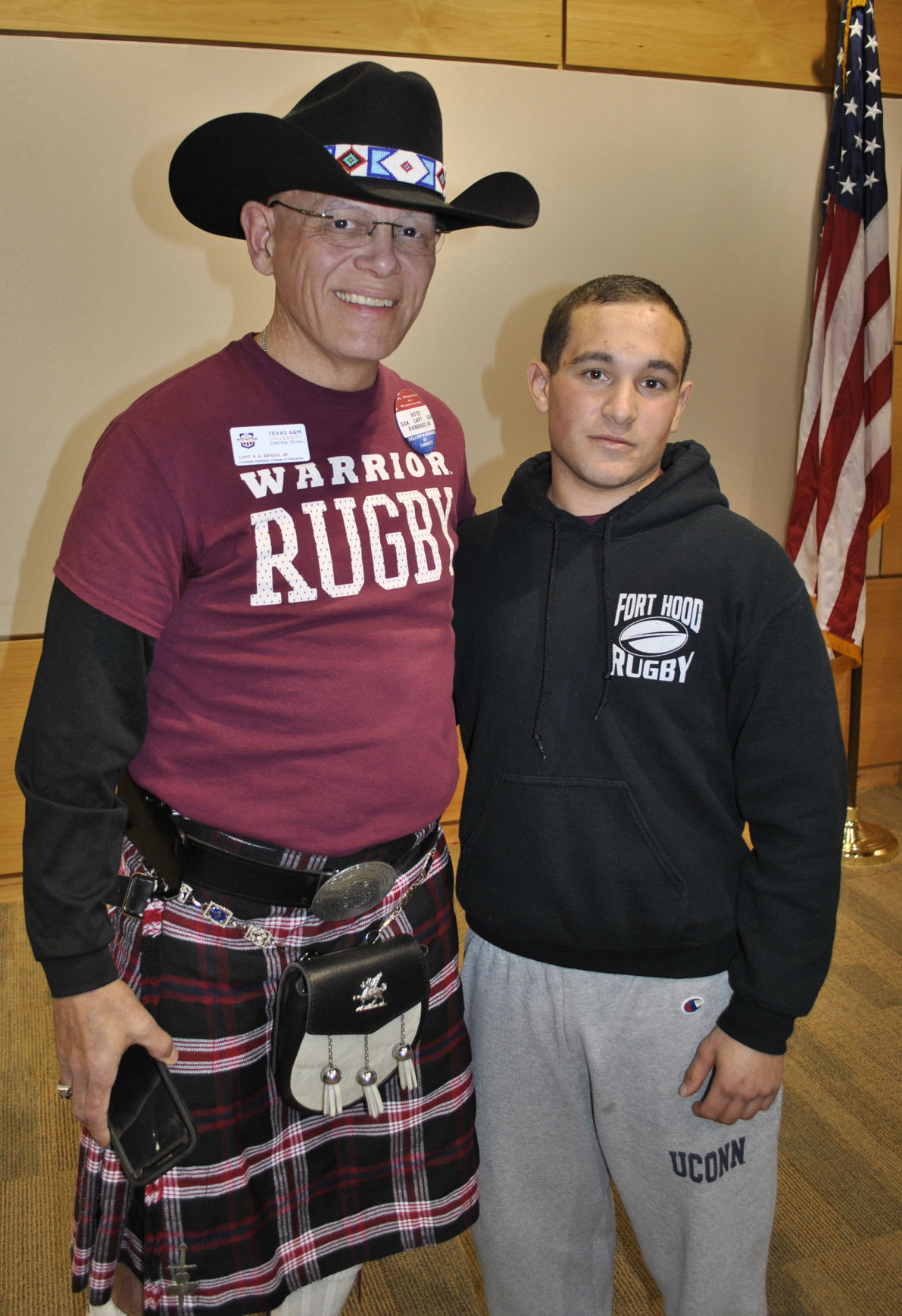 Ruggers Capt. Rick Briggs Jr., one of the members of Texas A&M-Central Texas's team, and Amitan Rubin, a member of the Fort Hood Rugby Club, show their support at Thursday's news conference.

Steve Hanik, second left, CenturyLink's regional market development in Killeen presents $15,000 to Texas A&M University Central Texas staff to be used to get its rugby team off the ground.

Ruggers Capt. Rick Briggs Jr., one of the members of Texas A&M-Central Texas's team, and Amitan Rubin, a member of the Fort Hood Rugby Club, show their support at Thursday's news conference.

Marc Nigliazzo, the president of Texas A&M University-Central Texas, is finally able to answer a question he’s heard from his students for more than five years: “Are we ever going to have any sports?”

Thursday afternoon, among a group of supporters and a couple of ruggers, Nigliazzo announced A&M-Central Texas will have a men’s and women’s rugby team that will take the pitch in fall 2015.

“Today, we just want to focus on getting it started, getting it launched, letting the community know about it,” he said, introducing head coach Dan Chase.

Chase, who has coached the Fort Hood men’s rugby team, grabs the reins as a well-seasoned international player and college-level coach focused on creating a competitive team open to all types of athletic talents.

“Rugby is a sport for all sizes, all athletic abilities ... believe it or not, one of the smallest player in rugby — 132 pounds — I’ve seen him layout a 232(-pound) man at full speed. That’s impressive,” he said.

It was rugby’s unique makeup and fit with the area that helped convince officials the sport was a good choice for the university. With its recent inclusion in the next Olympics, a National Rugby Football Leagues starting full-time in 2016 and the area’s Fort Hood Rugby Club and the Heart of Texas Youth Rugby program, officials said they saw a growing sport and developed local interest.

Growth aside, however, rugby’s notable culture and community also was a big positive in its favor, they said.

“It’s the one sport that’s so cohesive in unity, the only sport I really know, where you try to kill each other and then the home team comes out and feeds the visiting team,” Chase said. “Then you know what you do the next time you see each other? You’re best friends. Rugby’s such a tight-knit community.”

“It’s almost like you’re going to battle with each other,” he said. “It’s brutal, sometimes gruesome, but there’s also the camaraderie. ... We take care of our own.”

Rubin said he’s been around the country and every time he mentions rugby, he’s seen instant community.

The “game of hooligans played by gentlemen” will be a no-cut, club sport at Texas A&M-Central Texas that competes in national tournaments. It will be open not only to all students, but also those who attend nearby feeder schools such as Central Texas College and Temple College, as long as students sign a waiver stating they plan to enroll in A&M-Central Texas to complete their degrees.

“This is just one more thing that brings everyone together, I can tell you even the students on campus who don’t know the difference between a football and a basketball are still excited about getting out there and knocking heads over something that they can wear a shirt and put a bumper sticker on their car,” said Tracy Teaff, chief liaison officer at the university, looking forward to the effect the team will have on the student body.

“As a rugby player as a student at A&M myself, I am excited to welcome rugby as a club sport at A&M-Central Texas,” said John Sharp, chancellor of the Texas A&M University System.

Strong work, A&M-CT! Great to see rugby on the rise in Texas!

Glad they started something, but rugby? It's an exciting and brutal sport, but think it would have made more sense having a mens' and womens' soccer program, then add in softball, volleyball, baseball. There is a lot of home grown area talent in those sports.

I think this is a great step for the University. Hopefully the trend continues and the Texas A&M- CT can become a more well rounded school and part of the community.

Sorry, there are no recent results for popular articles.