Homophobic rhetoric was on display by a group of Temple residents during the Killeen Independent School District’s school board meeting this week.

Three residents from Temple, organized by the Concerned Christian Citizens, asked the Killeen ISD school board to take a position of “neutrality” after the group took issue with a KISD Career Center Women’s History Month bulletin board which included two historic LGBTQ activists — Marsha P. Johnson and Sylvia Rivera — among other honorees in March of the last school year. The Temple group’s timing comes on the heels of a rise in anti-LGBT sentiment in state government with Gov. Greg Abbott and some state politicians calling on the removal of what Abbott calls “pornographic” public school library books featuring LGBTQ characters.

In 2018, the Southern Poverty Law Center identified the Temple-based CCC as an anti-LGBT hate group because of its efforts to censor an LGBTQ pride month display at the Temple Public Library.

Leonard Halleen, of Temple, who rode into the boardroom on a motorized scooter sporting a Trump bumper sticker, told the Killeen school board Tuesday homosexuality is “unnatural.”

“What I’m really upset about is why are we encouraging, embracing unnatural acts upon our children. What must nature have to thrive? It must replicate. Homosexuals can’t replicate by definition,” Halleen said before adding a homophobic slur.

Jerry Abney, 78, of Temple, another member of the group, said Tuesday the bulletin board in question had “been used for special interests.”

“I consider this to be a challenge to you, the board, because if we allow special interests to start pushing their agendas in these schools then where does it stop,” Abney said. “What I’m asking is that you develop a policy of neutrality. I hope that will solve this problem right away and stop it. If not neutrality, then at least equality. If we go for equality then it allows many, many special interests to come in the door.”

KISD mother Theresa Bonilla addressed the need for additional COVID-19 protocol Tuesday, but ended her time with a statement about the homophobic sentiments aimed at the LGBTQ community.

“I do want to touch on the things said earlier,” Bonilla said. “I think all of our kids, regardless of their sex, their race, their sexual preference, deserve inclusion. That’s it. That’s all they want. They want to be accepted.”

KISD mother Amanda Anderson, a Central Texas Pride Community board member, said she felt compelled to attend the board meeting after hearing CCC’s comments during KISD’s Oct. 26 board meeting.

“We have LGBTQ youth in KISD,” Anderson said. “What is it about LGBTQ posters, clubs, or groups that have so many upset? What about the safety of our queer youth?”

Former KISD educator and activist Irene Andrews initially addressed the board Tuesday about additional COVID-19 needs, before adding her own statement about the anti-LGBTQ comments.

“I would like to close by being able to say only a couple of words about these folks, however well meaning they are,” Andrews said Tuesday. “The only difference between the KKK and the CCC is that the KKK is recognized as an official hate group by the Southern Poverty Law Center and the CCC is on their hate group watch list. The CCC is being watched because of their potential to cause harm. So, as far as I’m concerned, this is all we need to know and this is all I will give time and energy to say about them.”

The Herald asked the school district Thursday if the Career Center’s Women’s History Month bulletin board violated KISD rules or regulations, as well as whether hate speech is allowed during the school board’s public forum. 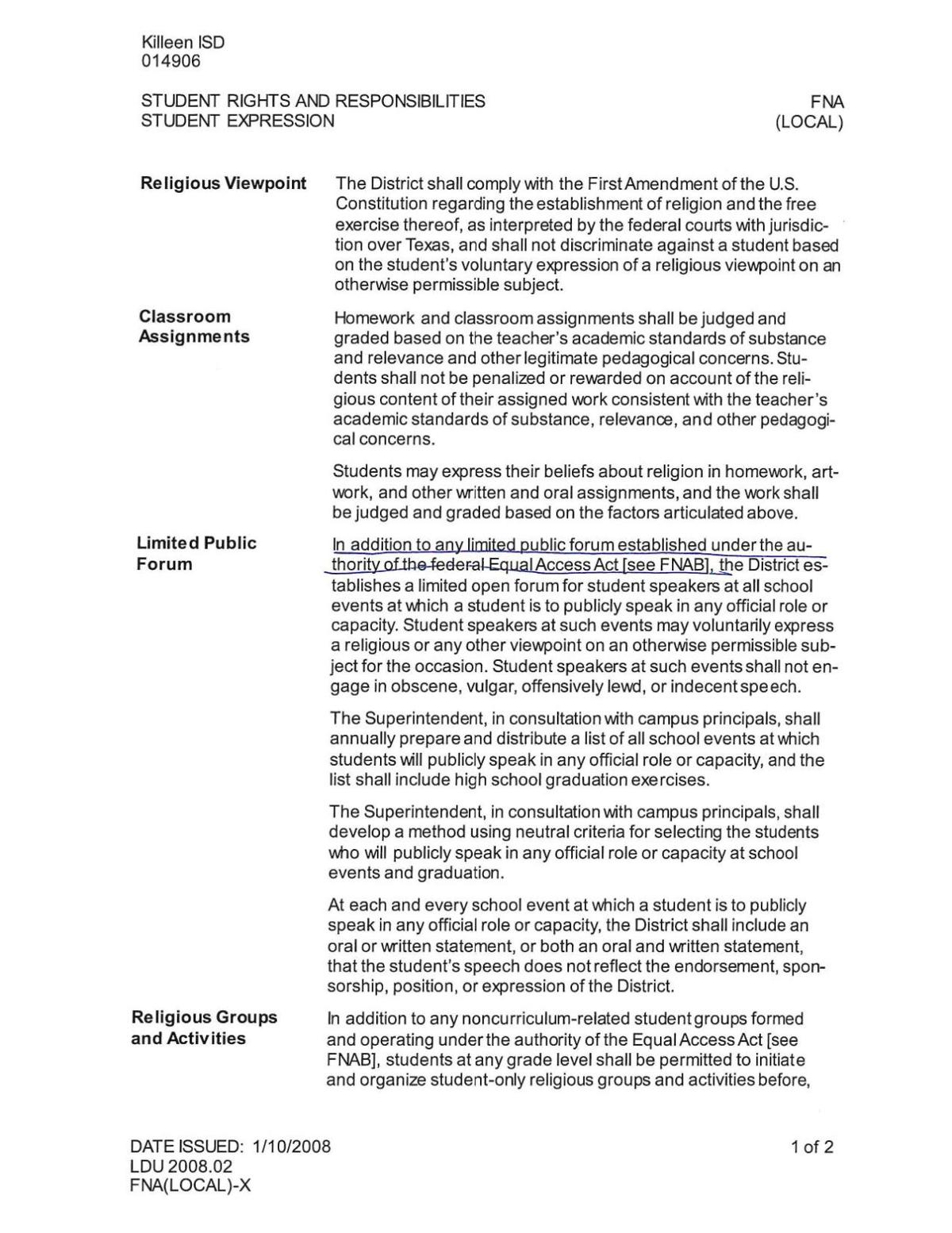 KISD Communications Director Taina Maya did not provide a direct comment, but responded by press deadline with 27 pages of district regulations including a document from the Texas Association of School Boards about “free speech rights.”

Is it not peculiar that those who assert individuals are "homophobic" can offer no acceptable terms and, or thoughts for individuals who disagree with them. The only words they can offer anyone who has an opposing opinion is to just stay silent, accept it and live with it. Right is right and wrong is wrong, despite ones personal beliefs.

Dodd's emotion laden bias on this issue illustrates why we must require occupational licensing to practice journalism. She whines "anti LGBTQ". I say responsible parents do not want their children exposed to this abnormal, sick behavior. She whines "homophobic." I say normal parents oppose abnormal behavior. Perhaps we should refer to her as "truthphobic" since she is promoting left wing extremist perverse behavior. She is an example of why the KDH has no credibility with so many readers. She cheers the Southern Poverty Law Center. That is one of the most radical left wing organizations in the country. I agree with the idea that this abominable behavior has no business being glorified in our schools. This also makes a strong case for school vouchers.

There only two genders period.arent the students confused enough already..go back to teaching math and English.. I and only I decide what my children believe in for the media already lie in favor of their narrative.

If the CCC is “Homophobic”, where is your evidence? Better yet, if you can and are willing to, tell me the definition of a homophobic. Please tell me what way is acceptable for an individual to voice their disagreement with “alternative” lifestyles without be labeled homophobic? Please tell me when someone can cross the line and be determined as “heterophobic”. Criticism cannot only flow one way while denying the right for others to criticize. This would be manipulation. For religious manipulation throughout time. I agree that it has been used to do some damage but, only by those who are not true to the practicing of their faith. The faith of the “non-believers” has also caused wars, led to many murders, dictatorships and manipulated humans. An example of the danger of “non-religious” government is China. China honors no belief and kills and, or imprisons those who do; especially, if they are trying to spread their faith. We already know how they are killing Muslims there. Therefore, it is not religion that can be blamed, it is the individual and the collective acts of humans who practice their own variations of their belief. Religious or “not”. Please do not forget to provide me with definitions and approved expressions.

I found it interesting that the writer for this article started off with the term "Homophobic". I am not here to speak my opinion, but the Herald has disappointed in choosing a side from the start. This paper, or the writer of this has displayed an unwillingness to recognize freedom of speech. A paper that is supposed to be for the "People", has revealed itself to be the paper of "Certain people". They appear to have removed the word "Opinion" from their vocabulary when the opinion does not line up with "The times". Herald, America was built on a foundation of free speech, even when the speech is contrary to those whose opinions are not in alignment with it. Yes, we do know that some speech, such as various types of threats, but not to most opinionative statements. It would be interesting to know of the Herald's spiritual belief - at least those who decide what is to be printed or not. I cannot, unless they are of "progressive" church or faith, that they are religious at all. I am not just speaking of Christianity; but, Islam and Hinduism to say the least, do not support the practice of homosexuality. Still, the Bible tells its followers to love all people as Christ loves them. It tell its followers to "Let the wheat and the tares grow up together." and he will have them separated at the time of harvest. Everyone is to be loved and respected despite the paths they take in life. Why is it that the Herald and many others cannot do the same. Instead they label people who disagree with them, shame and ostracize them. Adult reporters cannot play the child in the room. They MUST be the adult.

Now KDH, you did neglect to identify some the women celebrated in this incident of the posted pictures, were not all women at all. I know for sure that one of them was a transvestite. A man dressed as and identifying as a woman. To calm many nerves, even the IOC(International Olympic Committee) declared that only transgenders who have completed a gender re-assignment surgery as being able to participate. Herald, is this committee also "homophobic"?

in conclusion, whether an opinion is agreed upon or not, it is not balanced reporting to condemn the undesired opinions while not allowing others to express their dissent equally without being victimized. KDH, shame on you. You appear to be transforming more and more into a "State run" newspaper. If any of you are religious, even if it is progressive, please check your "Bibles" and find out what it says about being respectors of persons, deceivers and dividers. I suspect no religion supports "Situational Ethics" and still being able to enter into whatever afterlife promise is made.

But, the CCC and the members that spoke ARE Homophobic.

If the churches allow all behaviors like this, then who are we to judge? I have no objections to their lifestyle as long as it doesn’t impact mine.

Parents bulling and using thier personal religion choice to do it.

Religion has been used to bully, start wars and kill since the first religion started on this planet way before the known religions of this day.

Kids see this type of bulling and learn one thing from it, they learn it is okay to bully someone because they don't agree with them, or thier religion isn't the same, or they are not the same political party or rather or not someone is wearing a mask.

This behavior is no different than someone demanding someone to wear a mask.

Both are people bulling another to force someone to submit to thier beliefs.

I am a woman, my pronouns are Miss, Mrs, mom, sister, born a girl and so on.

I don't care what someone calls me in all honesty as I am proud to be a woman hear me roar.

Yet I would never belittle anyone that chose to become a woman or believes themselves to be a woman, who am I to judge.

School is a place to learn, thier is enough distraction in the classroom as it is and social Justice and political agenda should not be in our schools.

Education is for everyone and should be taught to include everyone.

Education should be taught to educate our children, math, history, English/grammar, reading, home economics, and so on.

Education should teach skills to get a job, to become a doctor, mechanic and so on. So our children can go on to follow thier dreams and get jobs after high school or go on to higher education. Public schools should be used to fund education not indoctrination.

Stay golden to yourself.