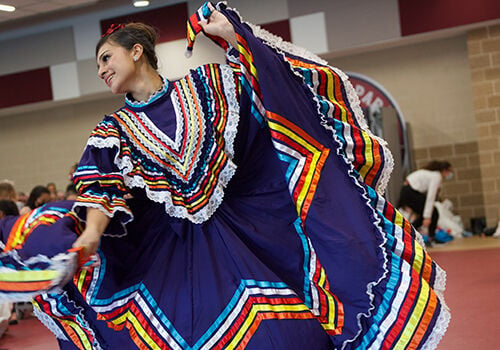 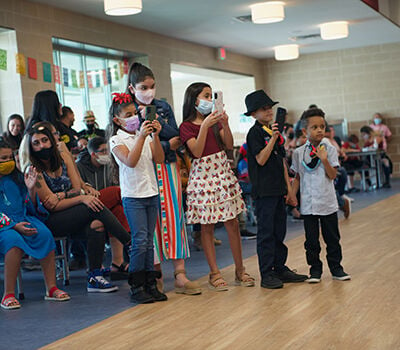 As long as anyone can remember, part of Pershing Park Elementary School’s identity has been serving a large population of bilingual students and families.

That important identity has included an annual salute to Hispanic Heritage and a well-attended celebration marked with music, dancing, food and friends.

For the first time Thursday, families gathered in the new Pershing Park Elementary School for the beloved event, and they came by the hundreds.

They formed a line at the front door before the scheduled start for the after school celebration.

Family members filled the cafeteria where the school’s fifth-grade choir began a program of cultural music. Local dance groups followed with fast-paced music and the colorful, twirling frill of dance native to Mexico, Puerto Rico and other Spanish-speaking countries.

They also posed for photos and walked through the main hallway to see displays illustrating countries like Panama, the Dominican Republic, Mexico, Cuba and Puerto Rico. Staff members made the decorations.

“We want to share the Hispanic culture with all of the community. We are like a family, and we want to involve everyone, not just the bilingual students. We share our culture.”

A year ago, the school hosted a small celebration just for the close-knit staff members and their families.

Last January, Pershing Park Elementary School relocated from its original campus to the new, much larger building. This is the first full school year for the new school, which consolidated with the now-closed Sugar Loaf Elementary School.

“It’s been a tradition here a long time,” said Principal Jessica Taylor, who was a teacher at Pershing Park prior to entering administration. “A lot of people put in a lot of work to make it special.”

Kindergarten bilingual teacher Sonia Mason said her students always get excited for the celebration and she makes sure they learn during the month of Hispanic Heritage focus.

“We talk about Hispanic heritage in class,” she said. “I don’t want it to just be a party. They do get excited. Some kids go home and change clothes and come back with their family. I think they were ready to mingle together.”