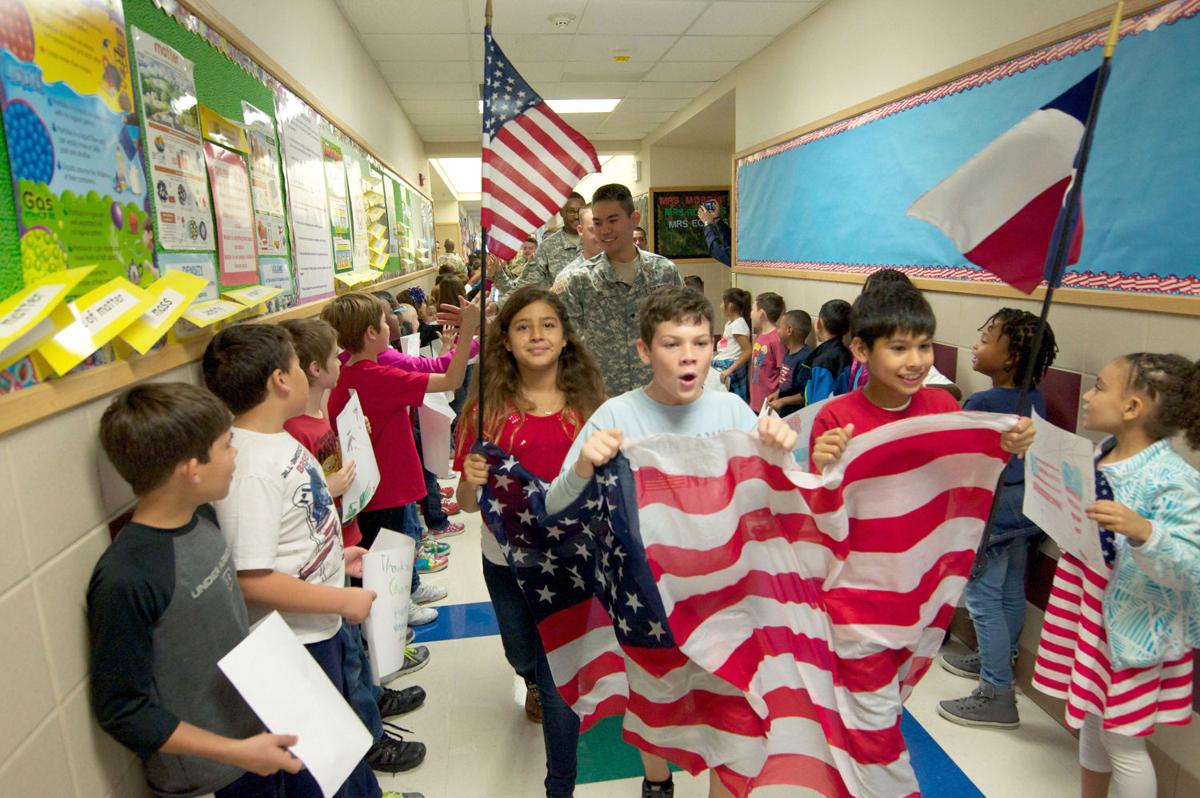 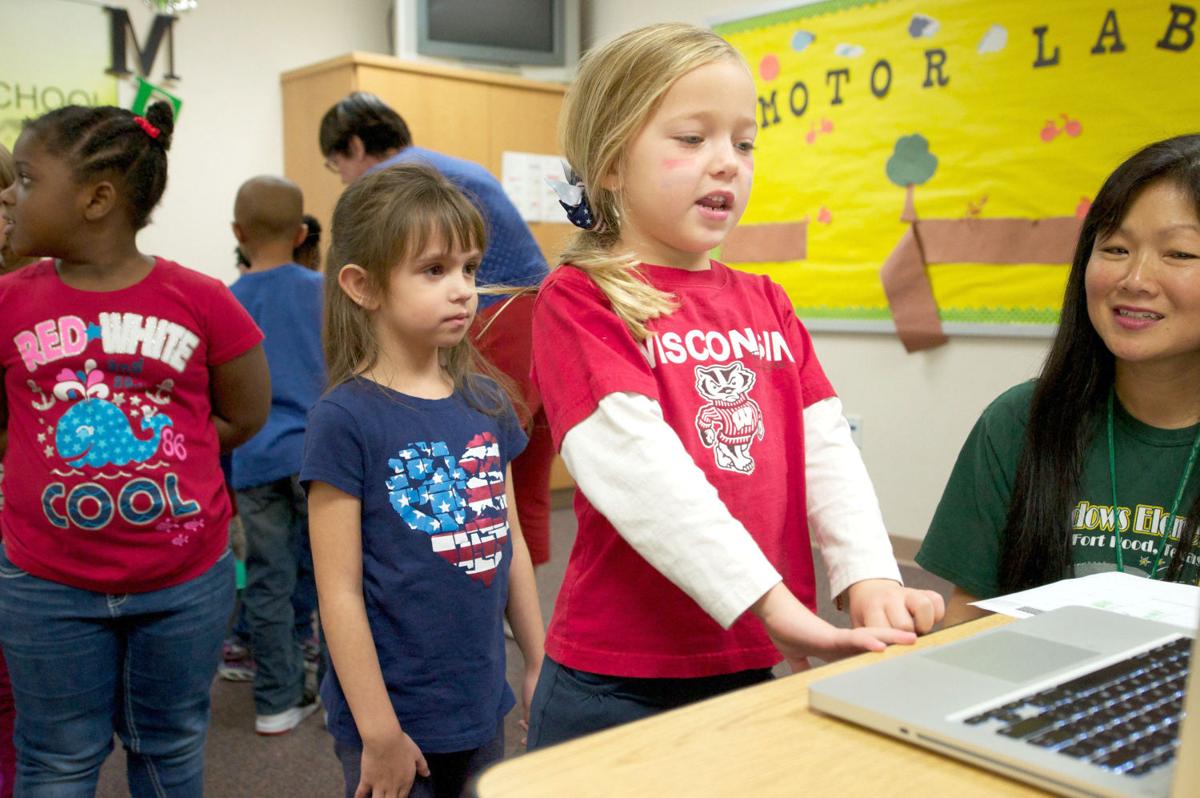 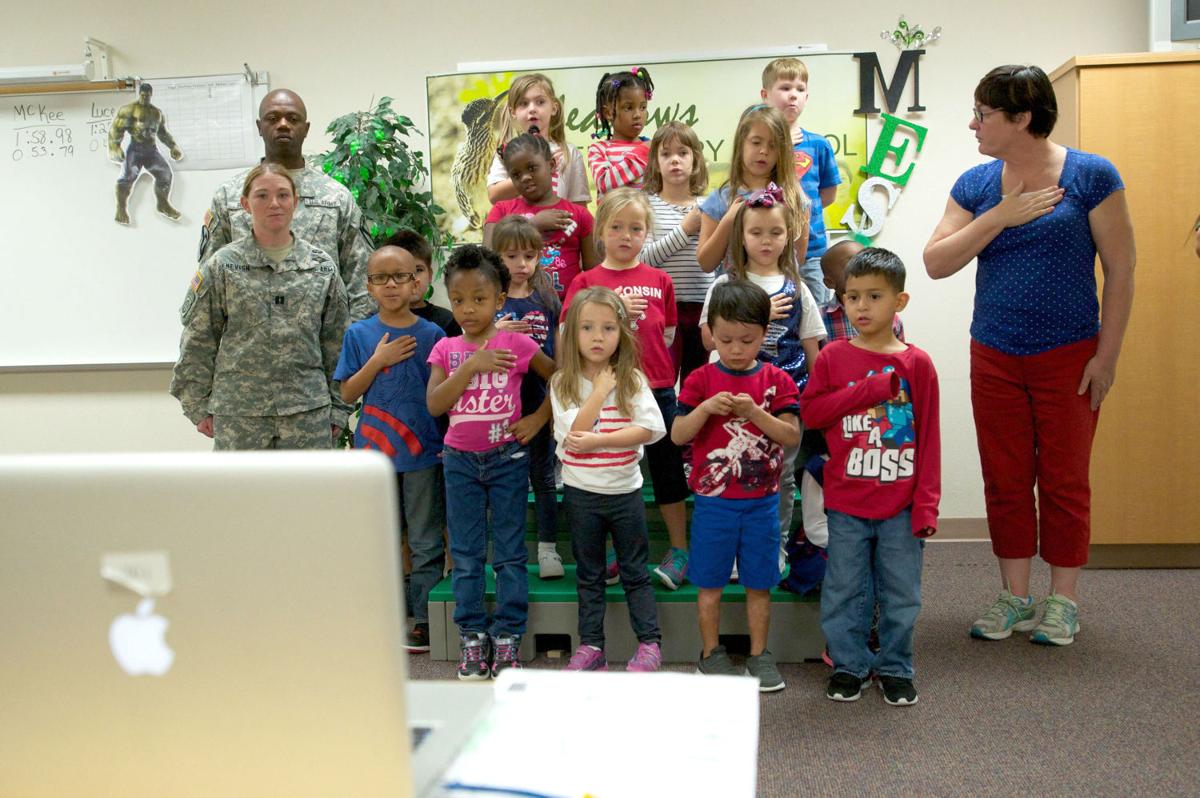 Meadows Elementary School kindergarten teacher Mary Moreau and soldiers with the 2nd Battalion, 82nd Field Artillery Regiment at Fort Hood help kindergarten students prepare to say the Pledge of Allegiance to the American flag Tuesday, Nov. 10, 2015, during a video conference with a middle school in Madison, Ala.

Meadows Elementary School kindergarten teacher Mary Moreau and soldiers with the 2nd Battalion, 82nd Field Artillery Regiment at Fort Hood help kindergarten students prepare to say the Pledge of Allegiance to the American flag Tuesday, Nov. 10, 2015, during a video conference with a middle school in Madison, Ala.

During this week of Veterans Day, students across the Killeen area are making powerful connections spanning generations and bridging across the country.

Today is a holiday in the Killeen Independent School District, where close to half of the 43,400-plus students are connected to the military. On Tuesday, children welcomed soldiers past and present into their schools.

To begin the day at Nolanville Elementary School, Lt. Col. Dean Huard of the 13th Expeditionary Command, presented an American flag that flew over his unit headquarters in Kuwait a year ago to his youngest son’s school.

Now a third-grader, Colton Huard and the rest of the grade level honored Huard and all veterans, reciting the pledge, singing patriotic songs and listening as music teacher Stephanie Munoz played taps on the cornet.

At Palo Alto Middle School in Killeen, 75 soldiers volunteered in classrooms and took part in an assembly that honored all the military armed services and expressed the importance of the day.

At Clear Creek Elementary School, students and parents joined veteran guests for lunch during Take a Vet to School Day sponsored by the History Channel and Chick-fil-A.

At Meadows Elementary School, students cheered as adopt-a-school unit soldiers paraded through the building before posing for pictures and accepting hand-drawn thank-you cards.

Meadows extended its adoptive relationship with the 2nd Battalion, 82nd Field Artillery Regiment, to a middle school in Madison, Ala.

During the web connection, kindergarten students in Mary Moreau’s class introduced themselves and most ended their introduction with the phrase “My daddy’s in the Army.”

Moreau shared with the middle school students her experience as a military spouse and a teacher on a military installation, emphasizing the importance schools play in providing a safe haven for children of deployed parents.

The middle school in Alabama connected with Meadows campus technology support specialist Stephanie Young during the summer at a conference in Washington, D.C.

A middle school class adopted Moreau’s kindergarten students and labeled them the “kinder Roos.” Middle school students in Alabama plan to read to the kindergartners at Meadows through a web connection.

For Meadows students and others across the Fort Hood area, honoring soldiers is as common as the sight of men and women wearing camouflage. It’s also important as ever.

“We are wearing red, white and blue today for our soldiers who served for us,” said Meadows fifth-grader Roxy Martinez, a student in the school’s Peer Leadership group who helped lead a parade through the hallways Tuesday.

The daughter of a veteran who served in Afghanistan and Iraq, she said the military lifestyle is difficult, but an honor.

“They serve our country and that means a lot,” she said. “We need them.”

At the other end of the school district, Nolanville Elementary School third-grader Lauren Allison agreed on the importance of honoring veterans.

“They do so much for our country. They save our country from wars,” she said.

“It’s incredibly exciting,” she said of walking in the school’s parade and posing for photos with students. “I think for the soldiers, a lot of them realize why we’re involved with the school. We get more volunteers than we can use.

“We enjoy coming out and giving back to the community,” she said. “The kids get excited to see us and the soldiers love to get time off to come volunteer with kids.”

HARKER HEIGHTS — Lights dimmed Tuesday night at the Harker Heights Parks and Recreation Center, as a light shined on the American flag, and co…