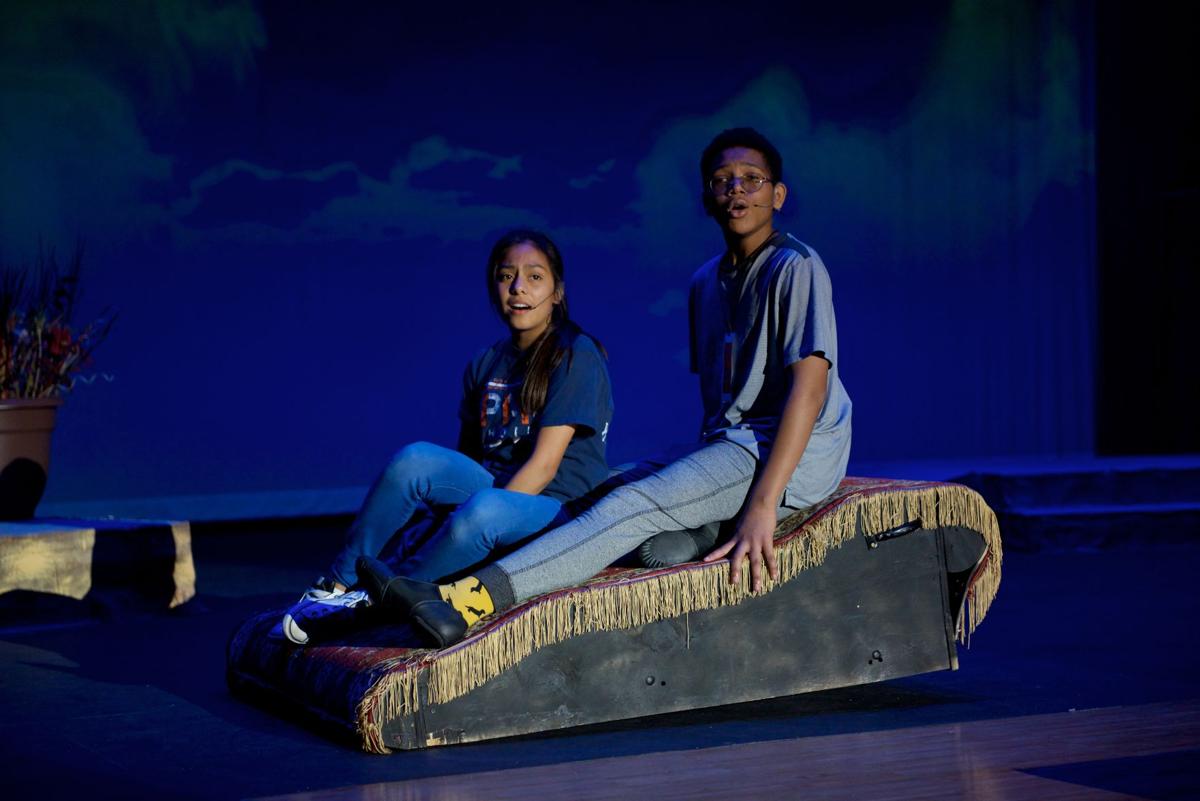 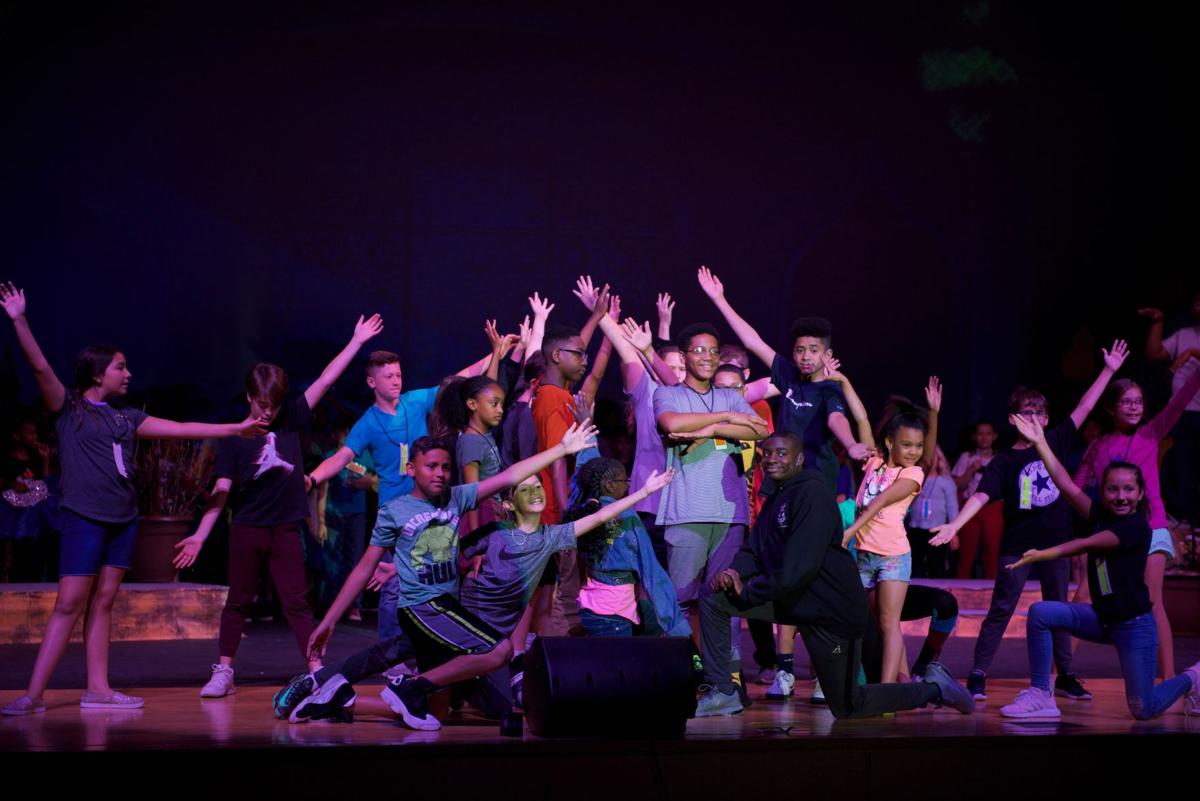 Part of the large cast for the KISD summer musical “Aladdin, Jr.” work their magic during rehearsal in anticipation for four shows Tuesday and Wednesday at the Shoemaker High School auditorium. 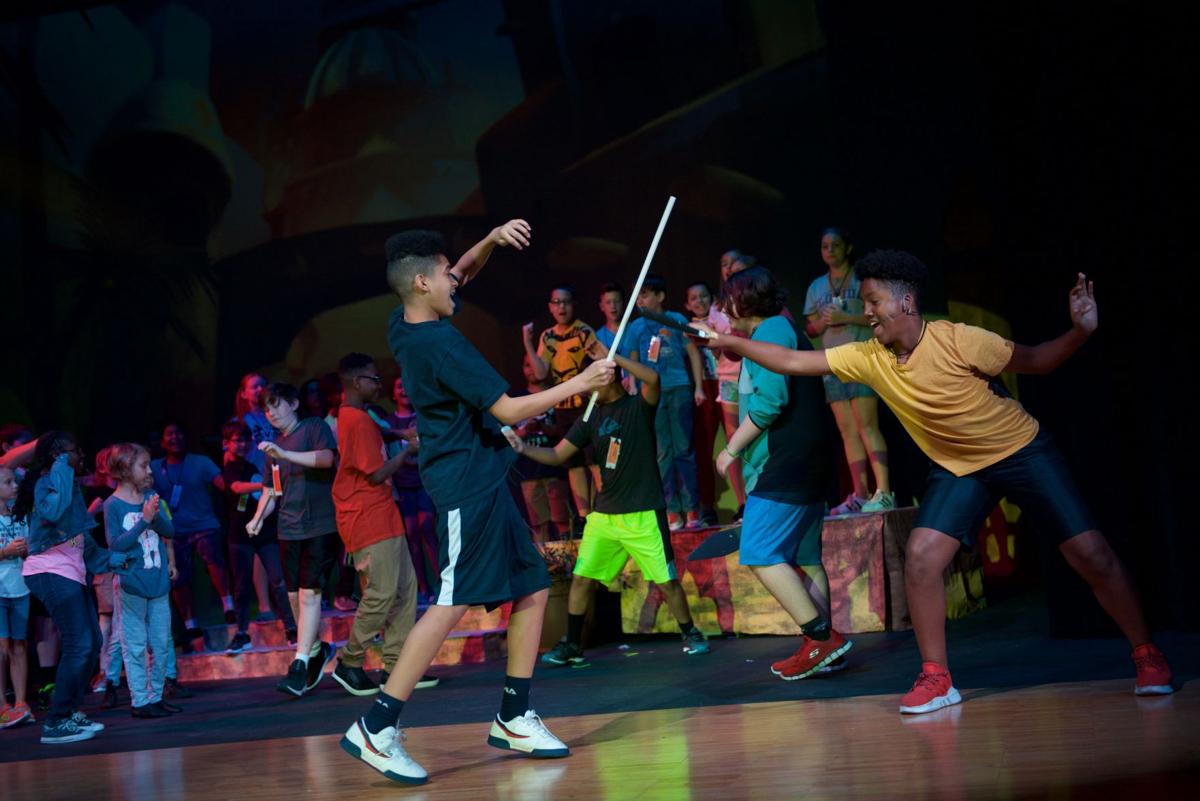 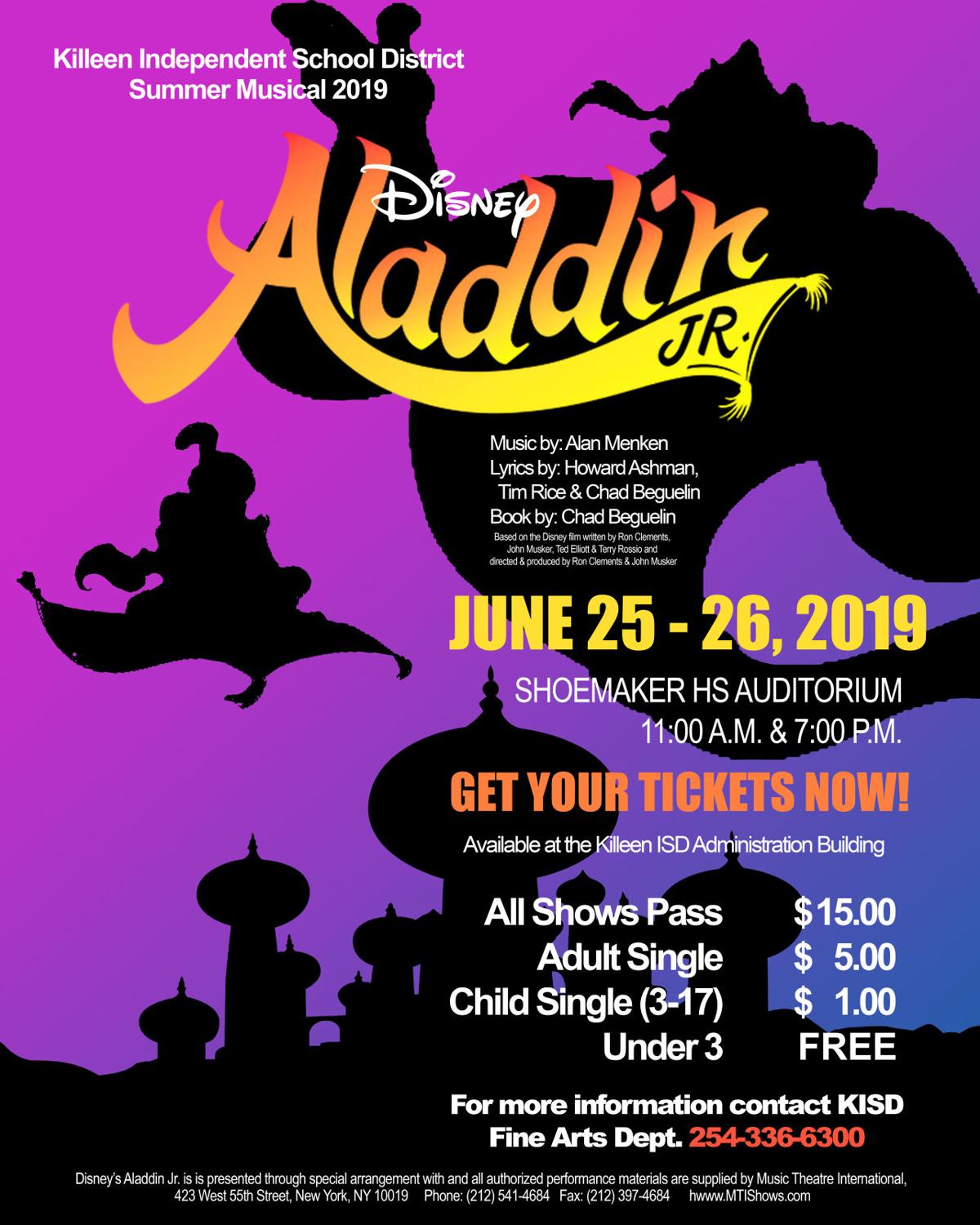 Part of the large cast for the KISD summer musical “Aladdin, Jr.” work their magic during rehearsal in anticipation for four shows Tuesday and Wednesday at the Shoemaker High School auditorium.

At its core, the familiar tale of the worldly street boy’s unlikely connection with the headstrong desert princess is about dreamers.

The large cast of first- through eighth-graders in this year’s Killeen ISD Summer Musical are bringing to reality the magic of “Aladdin, Jr.” with shows set for June 25 and 26 at 11 a.m. and 7 p.m. at the Shoemaker High School auditorium.

Adult tickets are $5, tickets for children 3 to 17 are $1 and all-show passes are $15. Tickets are available at the KISD Administration Building at 200 N. W.S. Young Drive in Killeen and at the door.

The 100-plus-member cast of elementary and middle school students from across the school district started rehearsal the week after the school year ended meeting five days a week to craft the musical.

They worked under the guidance of a team of school district theater, choir and dance teachers and high school volunteers four hours a day.

The annual summer show provides quality live entertainment for local families while giving students a chance to work on their acting skills or to try theater for the first time.

Patterson Middle School theater director Laura Day is directing the musical this year. “It takes a big, strong crew to make it happen, to put together something so grand in such a quick amount of time,” she said following Tuesday’s rehearsal.

The story, known from stage and screen versions, is one that children can relate to, the director said. “Aladdin is about dreamers. All of our kids can relate. That’s why it means something to them. It’s about finding where you need to be.”

Incoming Killeen High School ninth-grader Elijah Johnson did not expect the title role to be the place he would be. “It’s a lot work,” he said. “I didn’t know if I could do it, but everyone here made it fun.”

The experienced choir student said it is the music of Aladdin that appeals most to him. He is tackling the reams of lines for his character and learning to play the part of someone different than his own personality.

“Aladdin wants people to see the good in him and he wants everyone to be proud of him,” Johnson said.

Soon-to-be Ellison High School ninth-grader Azul Esparza can relate to dreams. She remembers distinctly seeing Aladdin for the first time and being drawn to Jasmine, though she didn’t expect to get the role in this summer’s show.

Being a princess — the adoration, the authority — is not Esparza’s natural instinct. “I like to explore outside my boundaries,” she said. “It’s fun to be an actor with that personality.”

Another actor serving up a large portion of magic is the genie, which new Ellison High School freshman Angel “Luis” Gonzalez is playing.

“What I really enjoy about the role is that everyone knows he is outgoing, he puts on a show.”

Like the other actors and directors, Gonzalez said the whirlwind schedule was a challenge and an exciting, worthwhile ride. “It’s been amazing,” he said. “I love everyone here.”

There are all kinds of reasons to attend this year’s musical — to support the hardworking, talented cast and crew, to take in the fun, family entertainment and then, there’s something else.

“I think you come because of the adventure,” said Esparza. “There is a magic carpet and there’s romance. I get to ride and control the carpet and get creative with it. It’s an amazing experience, a memory I know I will enjoy.”

Todd Martin is an employee of the KISD communications department and writes about students, teachers and school events.