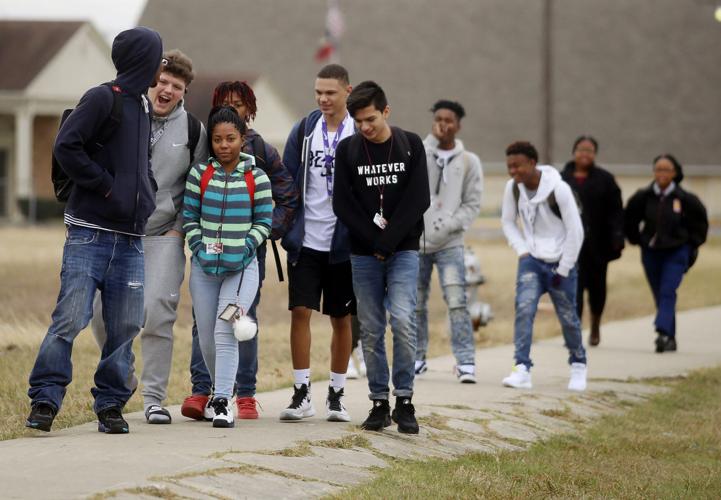 Killeen High School students walk down North 38th Street in Killeen during a lunch break in 2017. 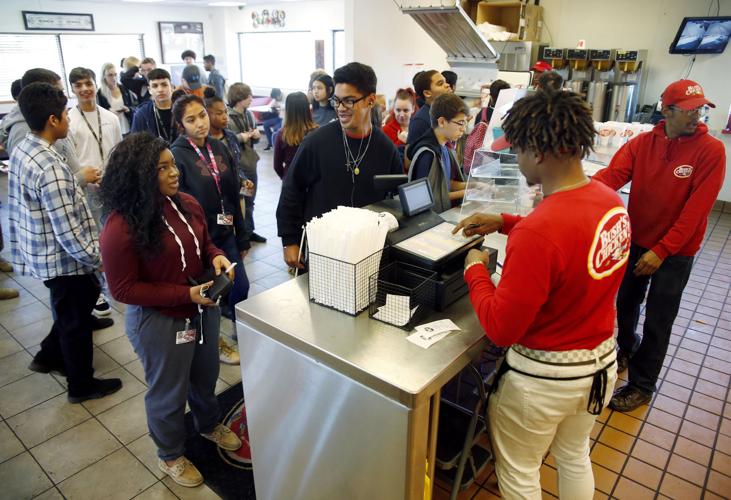 “The beginning of the 2022-2023 school year will mark the opening of Chaparral High School (in south Killeen) and the expanded capacity within our high school cafeteria spaces,” the Killeen ISD board agenda states.

According to the agenda, the district is citing safety concerns as part of the reason for the closure.

Under this new proposal, high school seniors who have met “College, Career, and Military Readiness criteria” will be exempt from the new policy and still able to eat lunch off campus.

In recent years, Killeen ISD has been unable to offer lunch to every high school student on campus due to cafeteria space limitations — leading to thousands of students to leave campus daily for nearby eateries and gas stations. During the busy lunch hour, when school is in session, it’s common to see students jay-walking in busy thoroughfares.

In 2019, a 15-year-old Ellison High School student was hit by a car during lunchtime. A helicopter was initially called for, but the student was transported by ambulance and was upright and alert, KISD officials said. The incident happened on Trimmier Road in front of the donut shop.

In 2016, another Ellison High student was struck by a car returning from lunch. The injuries placed her in a coma for weeks. Also that year, Shoemaker High had problems with students fighting during the lunch hour, as well as after school.

In 2015, two students were racing cars on Trimmier Road during their lunch break when they struck another vehicle causing the deaths of the two occupants inside.

Other items on Tuesday’s school board agenda include:

To view the board’s full agenda and attachments in advance of Tuesday’s meeting, visit https://bit.ly/3NGrY0w.

The workshop meeting will begin at 6 p.m. in the district’s administration building located at 200 N. W.S. Young Drive in Killeen. The meeting will also be streamed live at www.killeenisd.org/livetv and on KISD TV Channel 17.

I don’t agree with the closures of schools at lunchtime. Children use the time to have an outlet of being in class all day. Most days when I was in school I ate lunch on campus. Sometimes it felt great just to get out and meet friends for lunch.

The numbers don't add up to feed all these students in the allotted amount of time. A previous Herald article stated that each High School Campus has 2000 students. The Power Hour concept allots approximately 70 minutes for lunch. Let's be kind and just suppose that 50% of all the students bring their own lunch from home. Let's further suppose that 30% are so frustrated from the long lines that they don't eat. That leaves 20% , which represents 400 students to go through the lines. Now, let's suppose that a super-human staff can service 1 student every 10 seconds(not likely, I would claim). That works out to (400 students X 10 sends) = 4000 seconds. Now, 4000 seconds = 66 minutes (the whole Power Hour). What this means, of course, is that students that get into the line early will be able to eat. Those at the end of the line will have to immediately through their lunch into the trash cans. Folks, this ain't gonna work, so I am happy that the board has done the right thing and agreed to review this again. Hopefully, there will be some math majors involved in the decision.

Here's what I would do if I were a student. I would TRY to plan my 5th period(the one right after lunch) to be my LEAST FAVORITE garbage class. I would then DEMAND to have at least 10 minutes to gulp down my lunch, and if I am late for 5th period than I am. Either that, or just leave and go out to eat.

I hope the board passes this. It's a high school, not college. Students will be safer!

The schools should have closed lunches. It will make schools and school areas safer for everyone The street vendors, as well as most students, will hate it. ...but, most students, of course, hate any kind of dress code, being quiet in class, following rules, and doing homework....so them not liking a closed lunch time will not be a surprise, but....will that be the best thing for them and the surrounding areas.? Yes, it will.