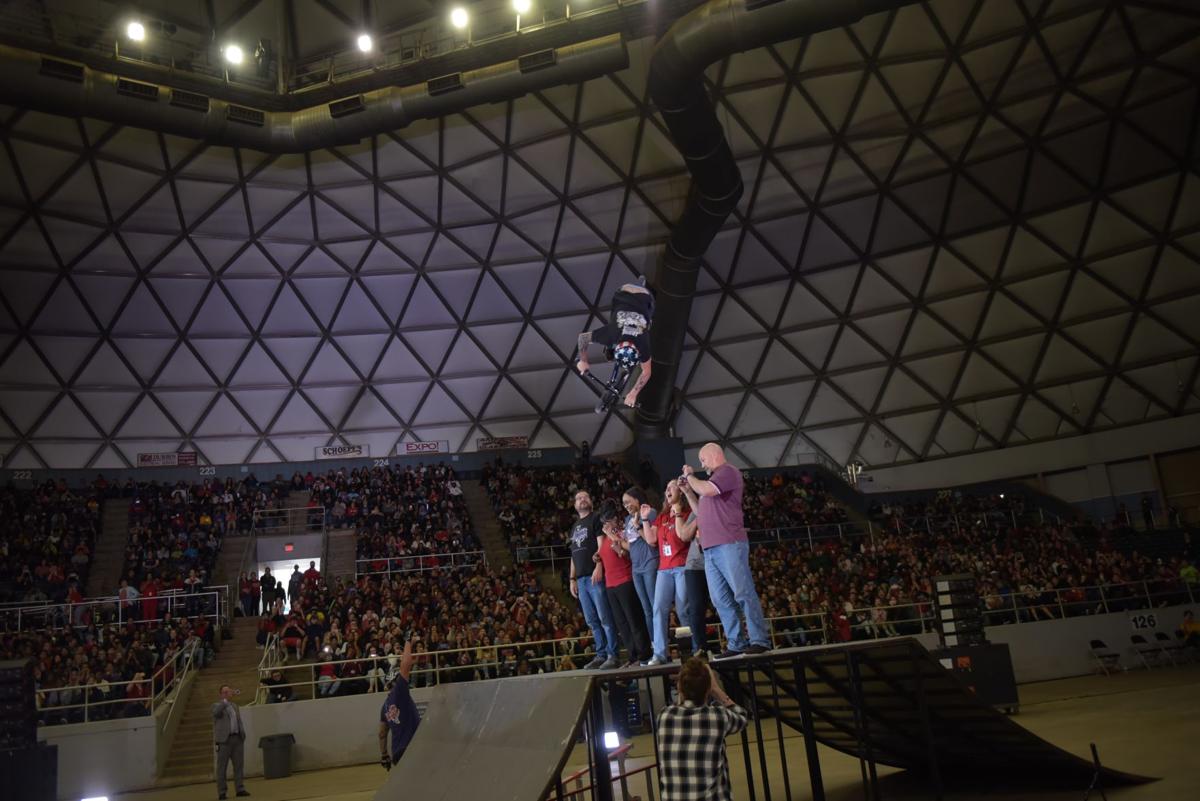 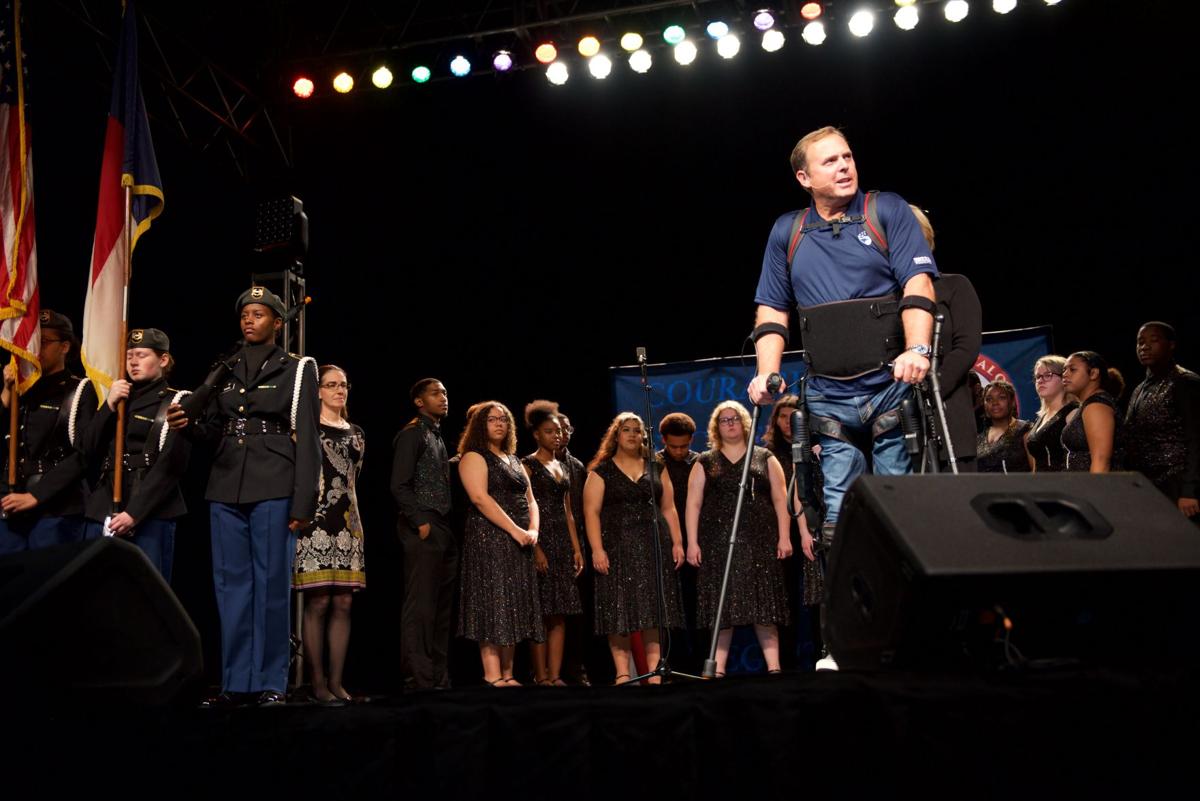 Retired U.S. Army Chief Warrant Officer Gary Linfoot stands Monday on a stage at the Bell County Expo Center with the help of an exoskeleton during the start of a Tribute to Valor program. The Killeen school district’s 10,000 middle school students participated in the event in two groups over two days, where they heard inspirational stories from military heroes and saw displays of extreme sport stunts. 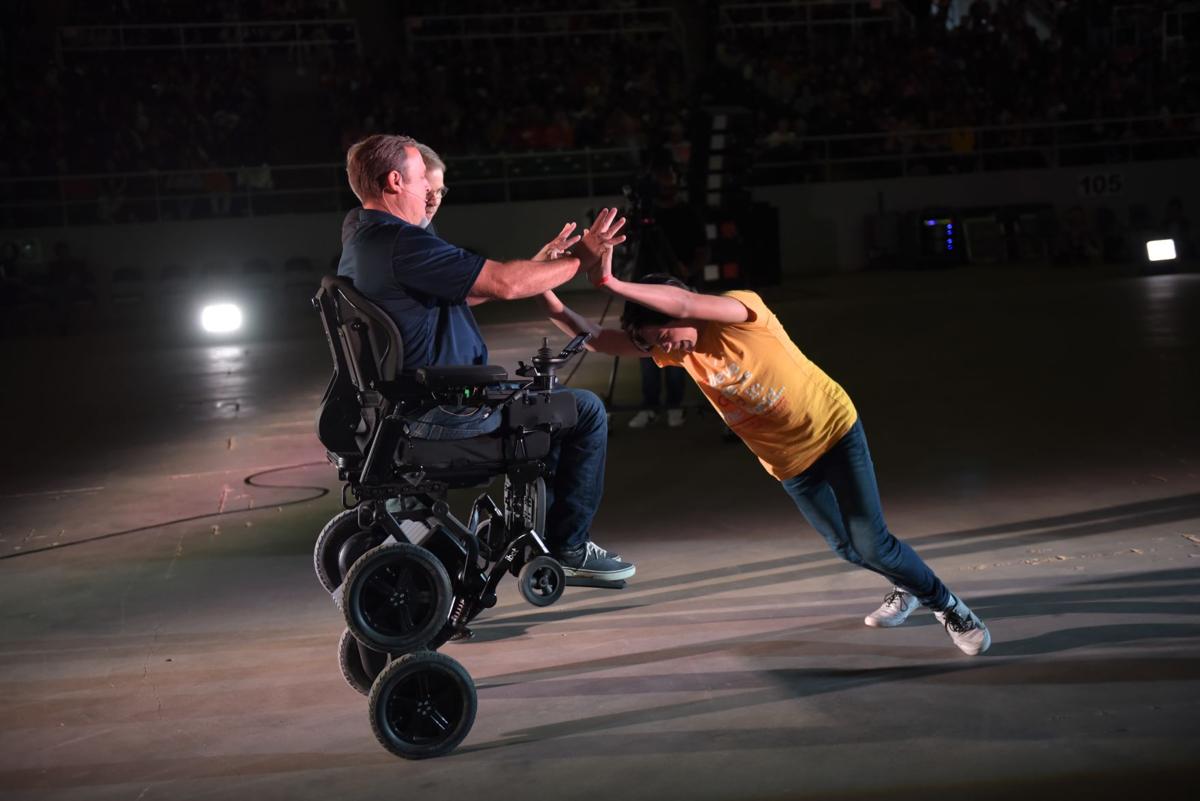 Retired U.S. Army Chief Warrant Officer Gary Linfoot stands Monday on a stage at the Bell County Expo Center with the help of an exoskeleton during the start of a Tribute to Valor program. The Killeen school district’s 10,000 middle school students participated in the event in two groups over two days, where they heard inspirational stories from military heroes and saw displays of extreme sport stunts.

BELTON — A soaring bicycle stunt combined with martial arts and a wounded American hero walking with an exoskeleton and robotic suit called an iBot.

Those were just part of 90 minutes of motivation during a Tribute to Valor program staged over two days at the Bell County Expo Center for all 10,000 sixth-, seventh- and eighth-graders in the Killeen ISD.

BMX bicyclist X-Game champions Morgan Wade and Mike Payne grabbed the attention of the middle school audience as their school principals stood on a platform and a racer circled the arena to gather speed.

The bicyclist approached the ramp as the principals watched the rider hurtling toward them, hit one ramp, flip into the air over them and land on another ramp.

“I thought it was cool,” Audie Murphy Middle School Principal Mike Quinn said at the conclusion of the Monday program. He joined principals from Nolan, Live Oak Ridge, Smith and Liberty Hill for the stunt.

The Audie Murphy principal said he liked the opportunity for himself and his colleagues to stand in front of their students for their benefit, to drive home the message of living life with strong character.

He also said the message of the Tribute to Valor program was clear – living a life of integrity.

“It was actually pretty cool,” Haynes said following the event. “It was surprising how it was able to fight back.”

About the program, the eighth-grader said the message was about showing strong character in life.

“Everyone should have integrity and be kind,” he said. “We should help someone when we see they have a need and we shouldn’t bully.”

The highest honor for valor in combat dates back to the days of Abraham Lincoln, but only 3,505 have earned the distinction and only 71 are alive today.

One of those, Linfoot, praised the doctors, nurses and therapists who cared for him following his 2008 combat injuries and his wife who endured the pain and continues to stand by his side.

Moving to the center of the stage with the help of an exoskeleton, the Medal recipient said he was most grateful for the privilege of being able to stand, when worshiping in church and during the pledge to honor the American flag.

In a poignant presentation near the end, Tiffany Eckert, encouraged students, particularly military dependents, that they are not alone and should extend kindness to one another and seek out the help of educators and counselors when needed.

Her son, Myles Eckert, received the first Young Hero Award, in 2016 when he was 10 years old after writing a note and giving $20 he found to a soldier as tribute to his own father who died in combat when the boy was an infant.

The generous young boy, who received a stampede of media attention is now a freshman in high school in Ohio and according to his mother is a regular teenager who sometimes struggles with his schoolwork.

She delivered a note of encouragement from her son for all KISD middle school students to Superintendent John Craft. She also delivered copies of a poster for all the district’s 11 middle schools bearing images of her son, his note and the words “kindness always wins.”

Tribute to Valor Foundation Chairman Gary Littrell, a Medal of Honor recipient and founder of the organization, told his own stirring story of overcoming hardship.

Orphaned just before his 15th birthday, Littrell said he left his Kentucky home, hitchhiked to California and joined the Army with a falsified birth certificate. When authorities found he was underage, he ended up homeless on the streets of Los Angeles.

After working two years, he re-joined the Army, where he found acceptance and excelled.Following a 22-year military career, he retired a Command Sergeant Major and earned the Medal of Honor for heroic service in a Ranger unit during the Vietnam War.

“If you can dream it, you can become it,” Littrell told the crowd of middle school students.

After introducing the six character traits of the Tribute to Valor Foundation, he said the most important word in the English language is integrity and urged students to ask themselves daily “Who are you and how do you want to be perceived.”

“It was actually pretty exciting,” said Union Grove Principal Paula Lawrason, describing the feeling of seeing the cyclist hurl over her head. “It was also a powerful message. For students to hear it firsthand, I think that brings it home.”

She said she appreciated Medal of Honor recipient Staff Sgt. David Bellavilla, who received the high honor earlier this year for courage under fire in the Iraq war in 2004. He urged students to let peer pressure be positive by choosing friends who practice strong character and standing up to bullies together.

Union Grove eighth-grader Trey Soriano, III, joined Linfoot and attempted to push over the iBot, a mobility device developed by 100 engineers that allows the paralyzed veteran to move on his own.

“It was exciting,” said Soriano, who appeared on the arena floor in front of thousands of peers. “It was hard to push him. It was super strong. I think the program sends a strong message. It inspired me to keep working hard.”