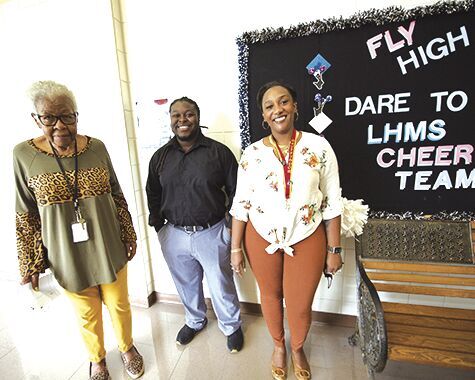 Filling out a teacher roster with subs might not be the planned strategy, but the principal at Willow Springs Elementary School is thoroughly grateful for her eight long-term substitute teachers.

“These are the best subs I’ve ever had,” said Principal Connie Locke.

The story is similar at Liberty Hill Middle School, where Principal Latricia Brown is praising her long-term substitute teachers.

From the perspective of the subs, spending time with students is turning out to be an eye-opening opportunity to invest in the future.

Brittany Moore, Mariah Buss and Lenora Todd-Parker expressed their varied reasons for pursuing long-term sub positions. All said they are happy to be part of the Willow Springs staff.

“It’s the kids in general that motivate me,” said Moore, who is pursuing certification to become a teacher and serving currently in a long-term sub position in kindergarten.

“I have kids who are learning to read and write and that motivates me to do more for them.”

Buss is in a long-term assignment in second grade. She is not yet a parent and found out from a friend about the need for substitute teachers.

“I’m not seasoned in this at all,” Buss said, still in her first week on the job. “I know they need our love. They need an adult to believe in them.”

Todd-Parker worked in the prison system before making a career change and taking on a substitute teaching position at a middle school last February.

She was one of several substitute teachers called to begin at Willow Springs Aug. 3 when teachers began the current school year and is now teaching first grade as a long-term sub.

“I love children,” she said. “We are like the second parent. We meet our students where they are and help to build their self-esteem.”

The first-grade sub explained that teaching requires a mix of kindness and patience along with a stern demeanor when necessary.

Some of her first-graders have never been in a classroom until this month. “Some of them haven’t been in school and they might not know their letters and numbers.”

“We are investing in them,” said Buss. “Teaching is more than numbers and letters, it’s how to think and make decisions. It’s way, way more.”

Locke said her long-term subs have shown devotion beyond their required duties. They often pitch in during dismissal and attend staff meetings.

“It’s important to me to not just fill vacancies, but to truly have people who care for children,” Locke said. “They are so dedicated and passionate. They are a part of our staff.”

Another substitute teacher, Alice Williams has been subbing at the middle school since 2004. Students and staff members call her “Grandma.”

Lattier took on the sub role when a friend told her of the need. “I thought I would give it a try and I actually enjoyed it,” she said. “It’s the kids I like. I’m helping them get to the next level.”

Folks, a 2013 Shoemaker High School graduate was in the midst of a job change when the school’s new assistant principal, his former AVID teacher Central Hicks, recruited him.

“I want to make my classroom a safe place,” Folks said. “I’m just trying to help them. I believe that all of them can become successful, going to high school and beyond.”