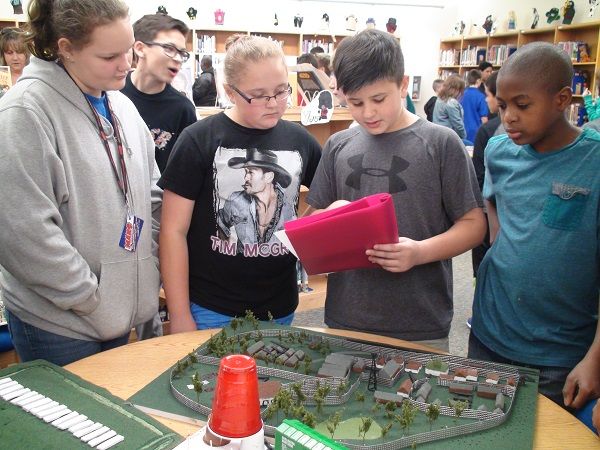 Joel Nace, 13, explained his research in building the detailed model of the Sobibor concentration camp. 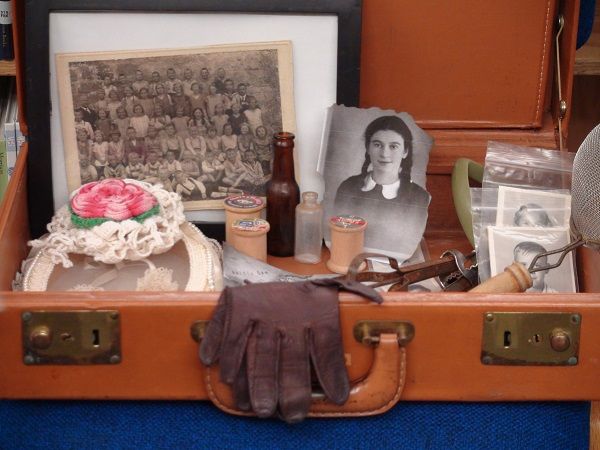 A possible suitcase and its contents of Gerda Weissmann Klein as reproduced by Daejah Whekins.

Joel Nace, 13, explained his research in building the detailed model of the Sobibor concentration camp.

A possible suitcase and its contents of Gerda Weissmann Klein as reproduced by Daejah Whekins.

COPPERAS COVE — It was a small suitcase filled with personal items, such as a handkerchief and a favorite necklace, from a young girl’s life that would soon end.

But to Crinity Easlick, 14, it represented what Anne Frank might have packed when she and millions of Jews were sent to concentration camps during World War II.

Easlick was one of about 175 eighth-graders at Copperas Cove Junior High School who made individual projects reflecting some aspect of the Holocaust for the school’s annual “Our Holocaust Living Library” presentations Thursday.

Easlick said Frank’s forgiveness impressed her the most. “Even when the Nazis killed her mother, she was positive and believed that everyone had a good heart.”

For the last eight years, eighth-graders participated in the event that challenges their imaginations and combines their English and history skills to research one of the world’s most horrible events.

“Students could choose from six different projects, like a collage, a concentration camp model or making a suitcase or writing a diary, and had to make it as authentic as possible in less than six weeks,” said Whitney Doverspike, an eighth-grade English teacher.

Principal Randy Troub said the students are capable of more quality work than most people realize.

“An assignment like this lets them understand it on their level and on their terms,” Troub said.

Students displayed their projects throughout the library.

Other students, school staff and a few parents stopped by to see and listen to the short presentations given by the eighth-graders.

Joel Nace, 13, made a model of the Sobibor concentration camp complete with a train on tracks and guard towers.

“I wanted to build something that would impress me, but it also shows the Nazis were inhumane,” he said.

Doverspike showed several students’ handmade diaries, including one with each entry written in English and German.

Zachery Lerue’s model of Auschwitz included an important but gruesome detail: ashes of the dead, which fell on the ground and were walked on by the living prisoners at the concentration camp.

“I’m quite impressed that some students went above and beyond what was required, but also they care about what they learned, and are gaining something from this experience,” Davis said.

Many students from other grades viewed the projects as a unique learning experience as well.

“Some of these students are teaching me things I can use when I’m older and I do this project,” said Mackenzie Carter, 12, a sixth-grader.