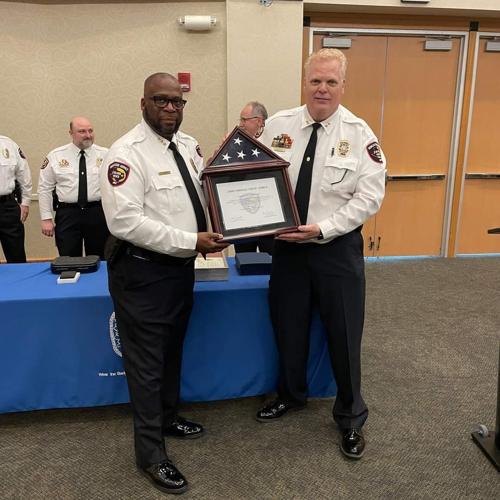 Killeen Police Chief Charles Kimble, left, is honored with a framed certificate and flag by Assistant Chief of Police Alex Gearhart during a farewell reception for Kimble on Thursday. Kimble is retiring from the city of Killeen later this month. 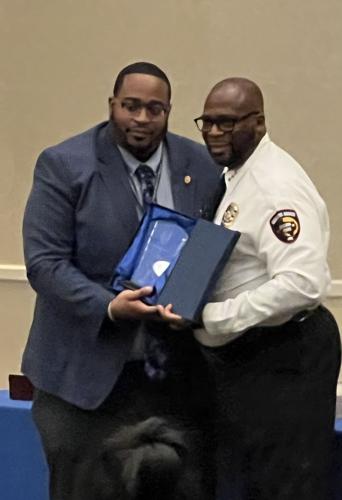 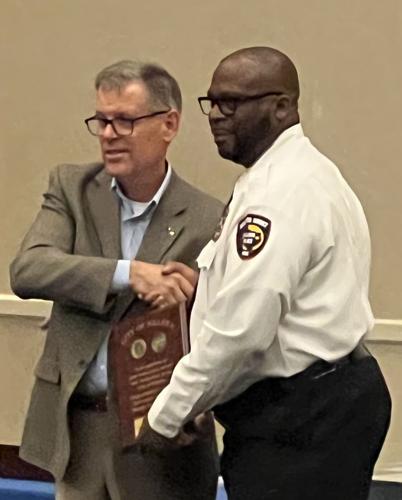 Killeen Police Chief Charles Kimble, left, is honored with a framed certificate and flag by Assistant Chief of Police Alex Gearhart during a farewell reception for Kimble on Thursday. Kimble is retiring from the city of Killeen later this month.

About 200 people on Thursday attended a retirement ceremony for Charles Kimble, the Killeen police chief who is leaving his post after more than five years here.

“I’ve been around three or four police departments,” Kimble, 53, said to the crowd at his farewell event held at the Killeen Civic and Conference Center. “I’ve been around some really good crime fighters. These guys and gals are some of the best of the best. I’ve seen them at their worst. I’ve seen them at their best. They work with this community day-in and day-out under some pretty harsh conditions, mind you.”

“I got here in August of 2017 and did not know a single soul in this town — except two people,” Kimble said, fighting back tears. “I learned a lot (about) this town from those men and those women and those veterans who have served this country. I can’t thank you enough for giving me the introduction to Killeen.”

Mayor Debbie Nash-King and City Manager Kent Cagle told Kimble that he will be missed.

“The city of Killeen is truly thankful for your outstanding and dedicated service to the KPD officers and staff and also to our community,” Nash-King said. “You will truly be missed, chief, and we thank you for your service.”

Laughing, Cagle said that he didn’t want “to be here.”

“I didn’t write any prepared remarks ... because I didn’t want to be standing here today talking about this,” he said. “I’m going to miss you a lot. This department is going to miss you. Some day, there’s going to be a new chief sitting in your office but they won’t replace you.”

Kimble began his career in 1991 in his hometown, Milwaukee.

“There’s a lot of incidents that happened in my ... career,” he said. “And it shaped me, and I think it shaped me for the better.”

“But it was also a department that needed some change, and change is hard,” Cagle said. “You hung in there, chief.”

Among those who attended the retirement ceremony are members of the Copperas Cove and Harker Heights police department, Killeen ISD Superintendent John Craft and Killeen City Council members.

Guess the thugs won this round.

Do you think a research park at Texas A&M University-Central Texas will pay dividends to the community?