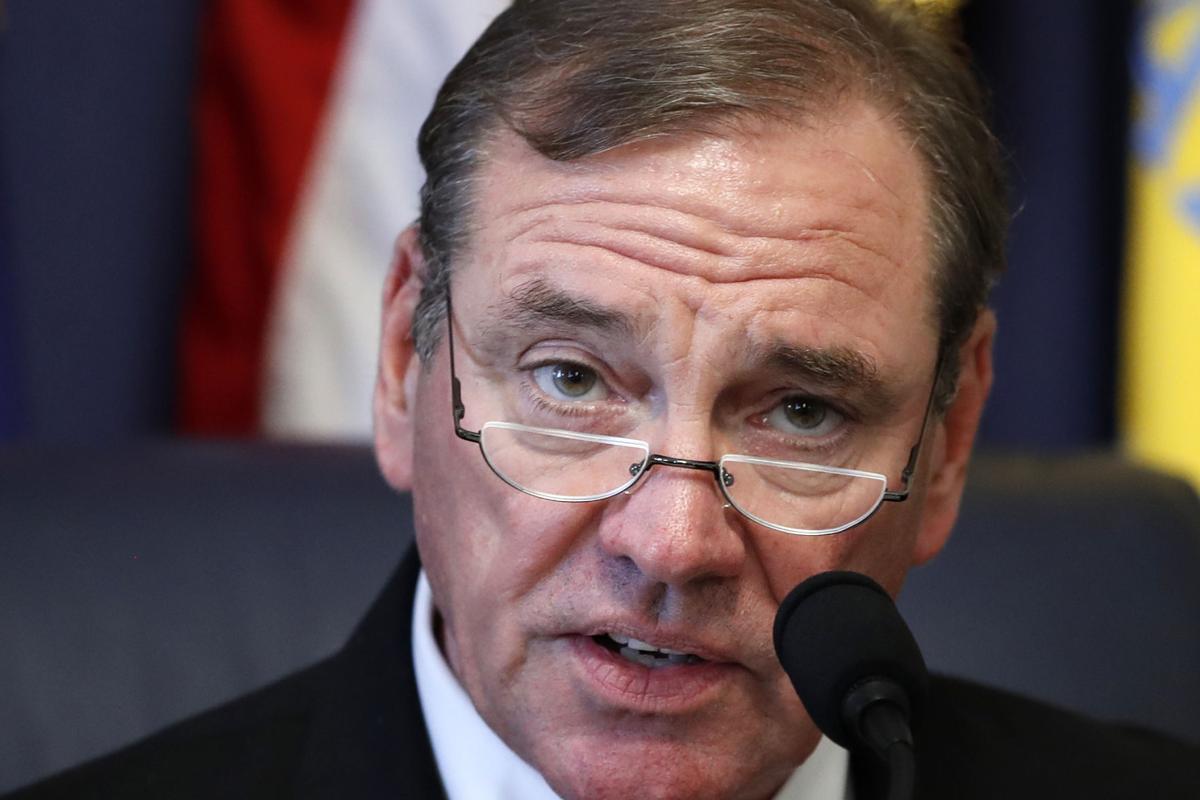 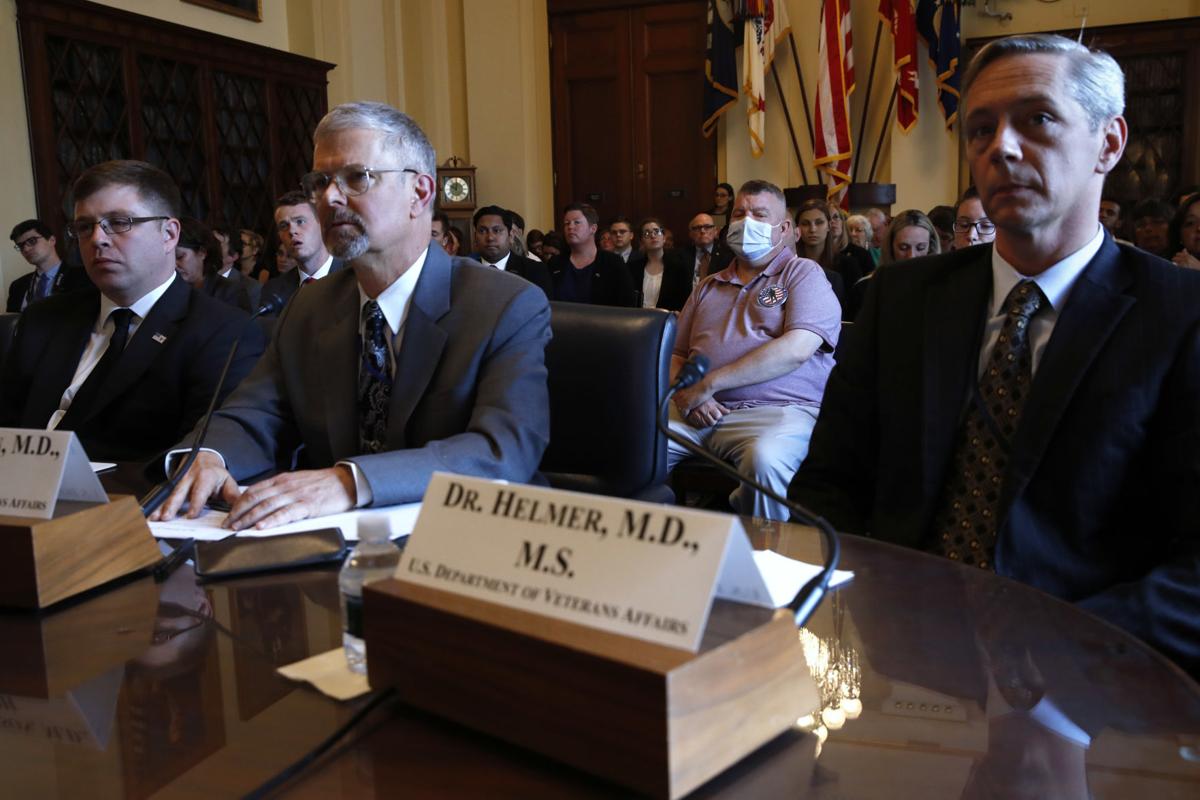 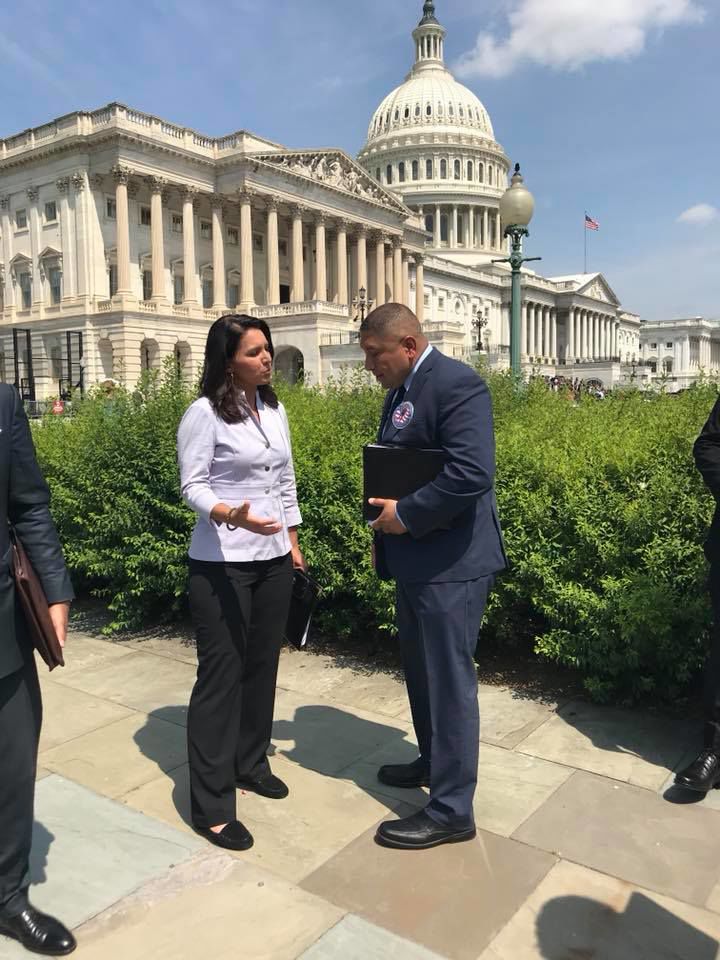 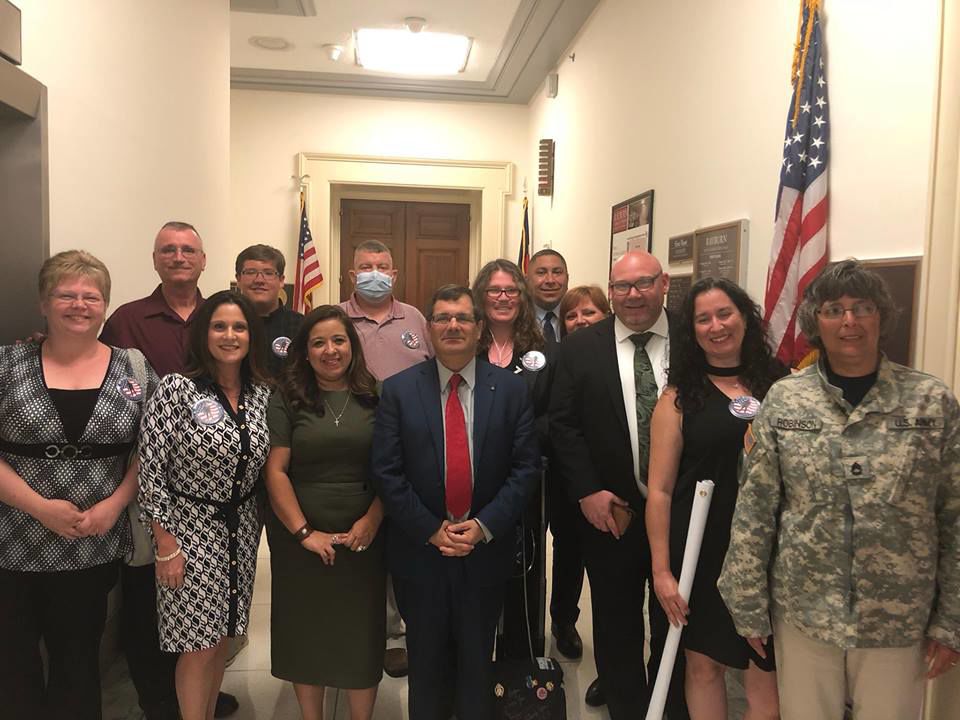 Members of nonprofit Burn Pits 360 pose with U.S. Rep. Gus Bilirakis, R-Florida, after the Congressional VA Subcommittee on Health meeting on veteran exposure to open burn pits in Washington, D.C. on Thursday, June 7, 2018. Bilirakis invited all veterans and families in attendance for the hearing to come talk with him in his office about their experiences.

Members of nonprofit Burn Pits 360 pose with U.S. Rep. Gus Bilirakis, R-Florida, after the Congressional VA Subcommittee on Health meeting on veteran exposure to open burn pits in Washington, D.C. on Thursday, June 7, 2018. Bilirakis invited all veterans and families in attendance for the hearing to come talk with him in his office about their experiences.

For 10 years, nonprofit Burn Pits 360 attempted to get the ear of Congress to air concerns about the treatment and care of veterans and military service members exposed to toxic airborne hazards and open burn pits while deployed to Southwest Asia.

On Thursday, for the first time, representatives of the Iraq/Afghanistan Veterans Association and the Veterans of Foreign Wars were able to bring those concerns — along with their own — to the Congressional VA Subcommittee on Health.

And those members of Congress — some of whom are veterans themselves — spoke with one voice, regardless of political party, on the need to expedite care for veterans without waiting years for the Department of Veterans Affairs and the Department of Defense to complete a study on the health effects of exposure to those toxins.

Deployments, including the Middle East, have continued since the beginning of Operation Desert Shield in August 1990.

Millions of service members fighting in Iraq and Afghanistan were ordered to burn everything so it would not fall into enemy hands or impact the environment. They used burn pits for things that included human waste and batteries.

Burn pits toxins were not the only airborne hazards, heavy black smoke from burning oil fields and the brown-out conditions of frequent sandstorms carried hazards capable of bringing long-term health problems to those exposed.

Here are some of the key problems discussed at the two-hour hearing, with some potential solutions.

The problem: Sick veterans have difficulty getting treatment and disability pay because research that could prove the link between airborne toxin exposure and their disease will take years. Some of those illnesses include rare cancers and constrictive bronchiolitis.

“All of us military people are afraid this will turn into another Agent Orange, that they will slow-walk treatment,” Dunn said, referring to the nearly four decades it took for DoD and the VA to connect Vietnam veterans’ health problems to a defoliant chemical the United States used in Vietnam.

“We need (care) now. We need useful guidelines, and we need to prioritize research. It was a sad situation taking so long to recognize Agent Orange. It might take Congress to fix this.”

Suggested solution: Tom Porter, the legislative director for the Iraq/Afghanistan Veterans Association, suggested listing exposure in a service member’s record before he or she leaves the military so a connection is established and can be tracked. Also, he suggested medical exams before and after deployments to look at body systems, such as lungs and measure any changes, such as in the respiratory system.

Moving forward: Unfortunately, the VA does not have the authority to automatically presume a sick veteran’s illness could be linked to exposure, said Dr. Ralph Erickson, the VA’s chief consultant on post-deployment health. Only Congress or the Secretary of the VA can make that decision.

Dunn said, “My sense is that this committee will certainly produce guidelines (for DoD and VA), possibly legislation.”

“It took our country decades to finally acknowledge our responsibility to care for veterans who were exposed to Agent Orange — we can’t repeat that history with burn pits or other toxic exposure,” he said.

O’Rourke said efforts should be accelerated to determine the scientific connection between burn pit exposure and related health problems and improve education for VA physicians to help better identify the symptoms and health care needs of veterans who were exposed.

The problem: Post 9-11 veterans who had deployed to combat zones where burn pits were in use are not getting information from the VA about possible health effects. Some don’t know about the Airborne Hazards and Open Burn Pits Registry and many more don’t know why they should sign up because they currently don’t have any medical issues.

The problem is communication — the VA uses newsletters and visits with veteran service organizations to get the word out about the registry and ongoing research.

Suggested solution: Get online and use social media, Porter said. “The current generation doesn’t read newsletters. The VA needs to be out there on Twitter, Instagram, Facebook and other programs this generation uses.”

Moving forward: Erickson acknowledged that the VA was behind the times on pushing information and has agreed to push for more social media use to reach veterans.

The problems: Only 141,000 of the 3.5 million eligible veterans have signed up for the registry. The sign-up process is difficult and requires a DoD self-service secure login. The registry form is long, and only veterans can access it — families can’t update it if the veteran dies or becomes seriously ill.

The majority of those who are signing up are the ones who are already ill, which causes a biased study because there is no other focus group to use as a balance, Erickson said. It is also self-reported, meaning someone who signs up several years after serving overseas may not have a solid recollection of what they were exposed to and how often.

Ken Wiseman, the VFW’s associate director of the national legislative service, emphasized that the VA needed to institute better options for their Airborne Hazards and Open Burn Pits Registry and run it similar to the registry maintained by Burn Pits 360.

“While the VFW is happy to see 141,000 veterans have signed up for the VA registry, a similar registry by Burn Pits 360 allows family members to update health concerns for their veterans,” Wiseman said. “The VA needs to do the same.”

The current number of veterans signed up for the VA registry represents only 1.7 percent of all post-9/11 veterans who are eligible, Porter said. “The result of this is that data is not being collected.”

Moving forward: After the meeting Thursday, U.S. Rep. Joaquin Castro, D-San Antonio — who attended the meeting — introduced the bipartisan Family Member Access to Burn Pit Registry Act, which would allow a family member to participate in the Airborne Hazards and Open Burn Pit Registry on behalf of a deceased veteran or service member.

The problem: Many women don’t identify themselves as veterans when they leave the service, making it more difficult for researchers to identify women’s health issues.

Some are concerned women's health issues will reach the next generation.

Wiseman brought up the fact that DoD and the VA need to have dedicated studies on the effects of burn pits on women’s health — in particular, reproductive issues.

“We have a woman veteran (within the VFW) who told us about how her children were all born with birth defects and high levels of heavy metals in their systems,” he said. “She was forced to get a hysterectomy in her late 20s.”

That testimony disturbed U.S. Rep. Julia Brownley, a California Democrat and ranking member of the subcommittee, who said she knows well that women seldom identify themselves as veterans after their service and wanted to know if the VA and Congress should focus on the issue.

Moving forward: Erickson, who is a third-generation Army officer himself and whose daughter is an Army lieutenant colonel serving overseas, said women may have very different health issues from exposure.

“We have two ongoing studies to give us a road map on how to launch a proper study to look at those effects and how they may be inheritable,” he said.

The problem: There is inadequate research on the various illnesses that could be tied to exposure, and it could take decades before determining a positive link between those illnesses and exposure. Research is currently shared between DoD and the VA, Erickson said.

DoD, however, declined to send any representatives to speak on what the department is doing to be proactive about research on the short- and long-term effects of exposure. DoD’s lack of representation was noted by each member of the subcommittee.

The solution: Include agencies outside of DoD and the VA to speed up the research process linking illnesses to exposure, according to U.S. Rep. Gus Bilirakis, a Florida Republican.

“We must get in front of the issue,” he said.

Regardless of the issue, it will most likely require Congress to enact legislation to get the ball rolling, said Dunn, who was an Army surgeon and also served as a physician with the VA. And caring for veterans is something all members of Congress could agree on.

“The issue of burn pits has not only hit a nerve with the subcommittee members, but also many other members of Congress with large populations of military installations and veterans in their districts,” he said.

And the time to do it is now, Brownley said.

Veterans and service members eligible to sign up for the Veterans Affairs Airborne Hazards and Open Burn Pit Registry* include those who served in:

How to sign up for the Burn Pit Registry

To get a Premium DS logon Level 2 account, go to veteran.mobilehealth.va.gov/AHBurnPitRegistry/#page/home and click on the link “Need a DS Logon?” Fill out the required information to set up a user name and password.

The registry will require some information on your locations during deployments. It is recommended you have your DD-214 handy as an aide.

If you would like to share your experience about health issues you believe are related to your exposure to airborne toxins and open burn pits while deployed, please contact David A. Bryant at dbryant@kdhnews.com or 254-501-7554. Please ensure you provide your name and a reliable means of contacting you.

Number of veterans in Temple Veterans Affairs Hospital region signed up for registry: 4,508

Total number of veterans up to age 64 possibly eligible to sign up:

Total number of veterans within the three counties (all ages): 71,656