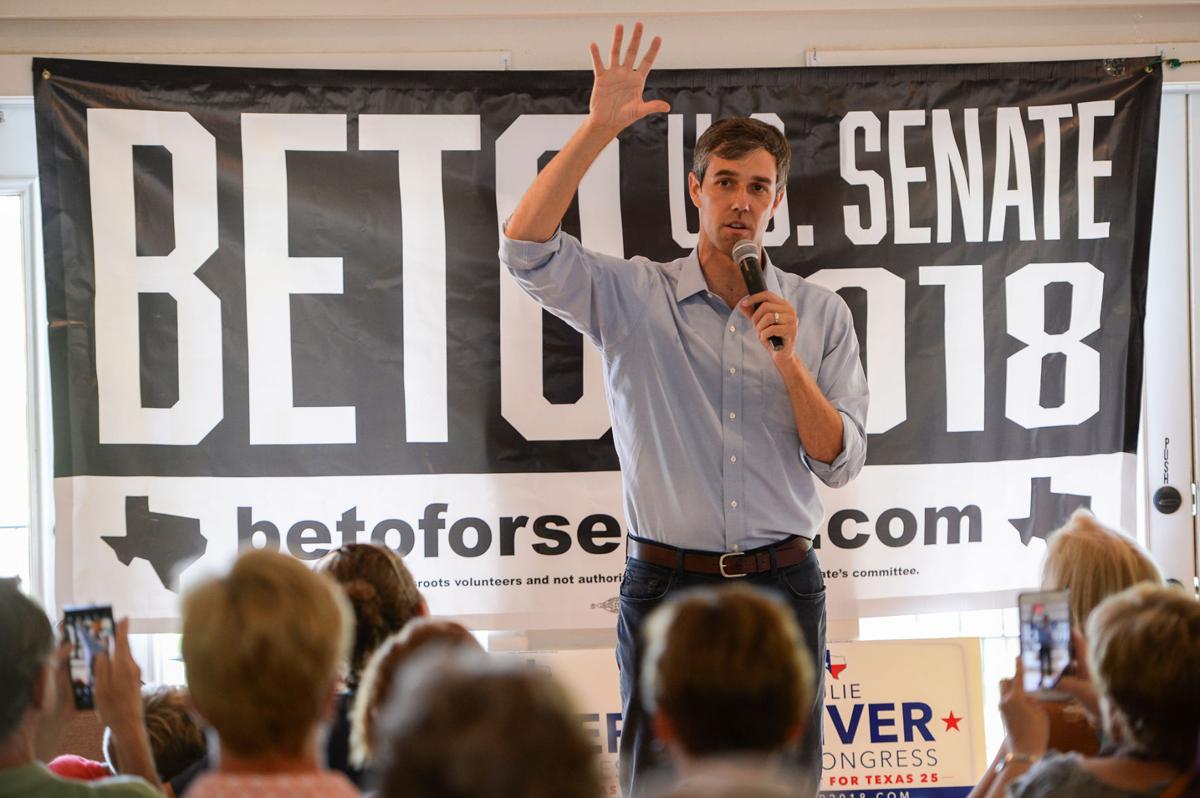 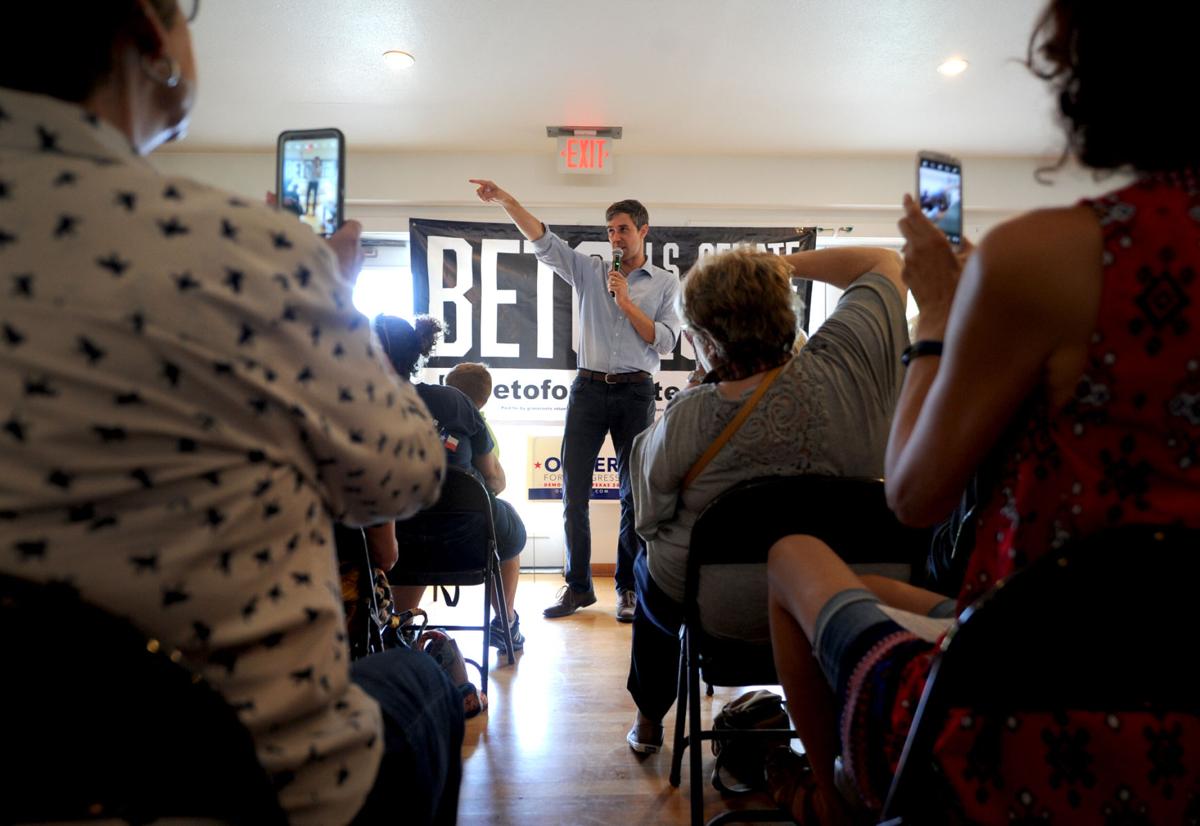 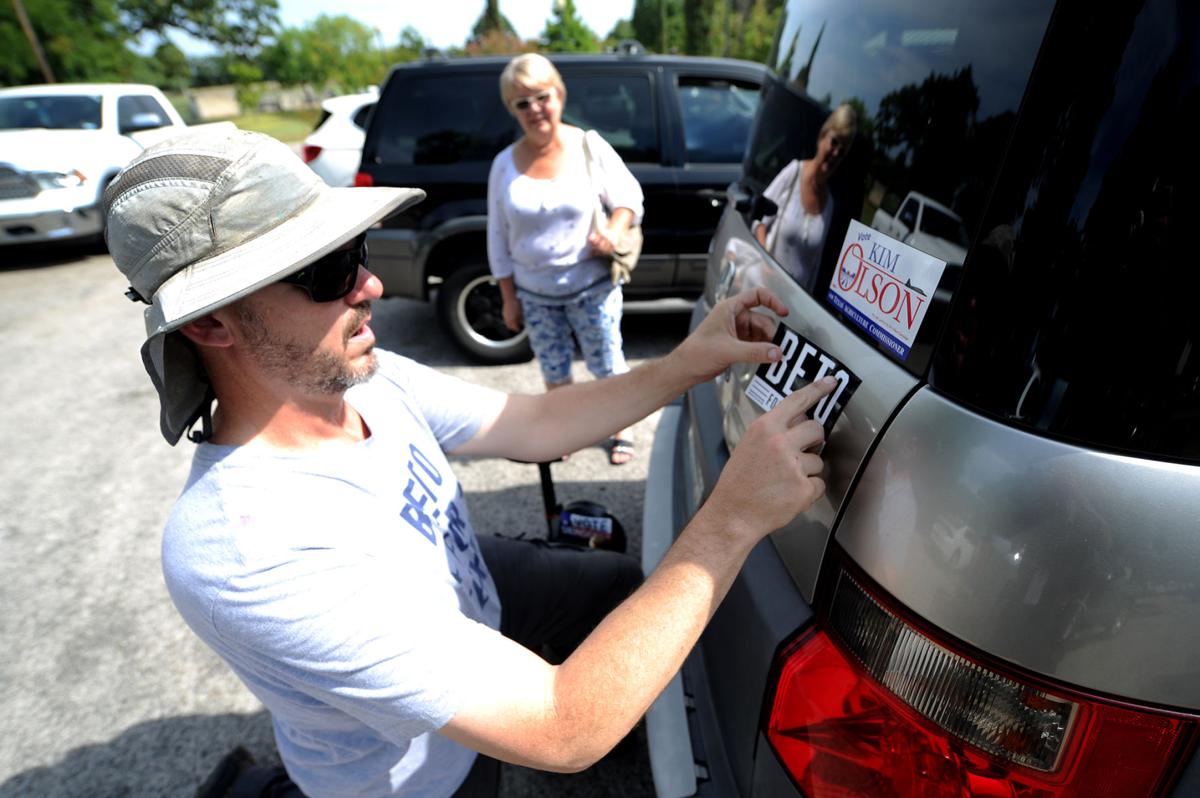 Janet Crozier watches as Doug McLean from Round Rock apply a Beto for Senate campaign bumper sticker on Thursday, August 16, 2018, at the Hostess House in Lampasas. 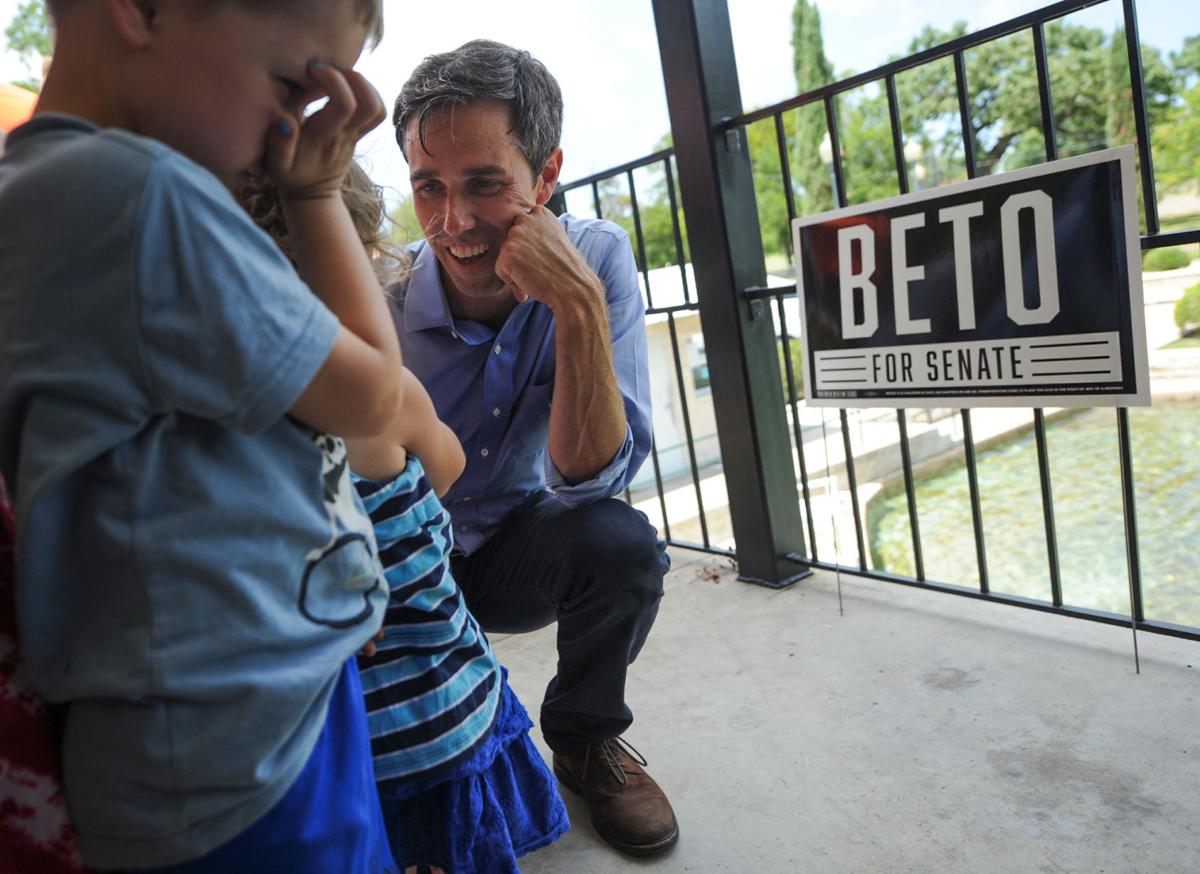 Congressman Beto O'Rourke visits with local kids and residents during a town hall meeting at the Hostess House in Lampasas on Thursday, August 16, 2018, as he campaigns for the U.S. Senate against incumbent Ted Cruz. 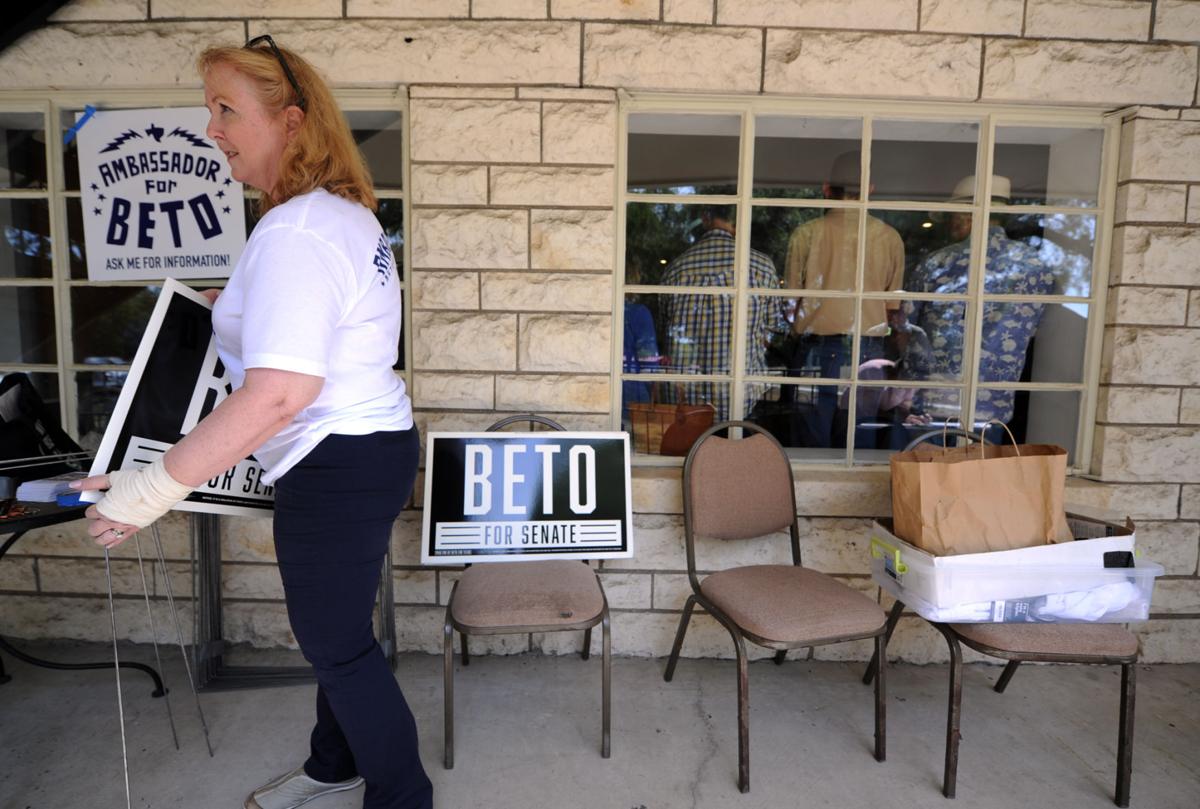 Beto O'Rourke Ambassador, Adare Siegel, puts together BETO yard signs outside of the Hostess House in Lampasas on Thursday, August 16, 2018, where there was standing room only for the town hall meeting in Lampasas.

Janet Crozier watches as Doug McLean from Round Rock apply a Beto for Senate campaign bumper sticker on Thursday, August 16, 2018, at the Hostess House in Lampasas.

Congressman Beto O'Rourke visits with local kids and residents during a town hall meeting at the Hostess House in Lampasas on Thursday, August 16, 2018, as he campaigns for the U.S. Senate against incumbent Ted Cruz.

Beto O'Rourke Ambassador, Adare Siegel, puts together BETO yard signs outside of the Hostess House in Lampasas on Thursday, August 16, 2018, where there was standing room only for the town hall meeting in Lampasas.

O’Rourke faced a crowd limited by the fire marshal, with a line out front, and standing crowds along the sides of the hall. Citizens endured overflow parking. Members of the Lampasas Democratic Party, which sponsored the event, said they had never seen such crowds for a political event in Lampasas County.

An estimated 175 people filled the hall. Party members and the public brought food, snacks, tea and lemonade. The hall, filled to capacity, made both Beto and his listeners sweat heavily.

O’Rourke’s first name is Robert, but he is known as “Beto” by his family and campaign staffers, and now, by voters across the state. He faces Texas’ junior U.S. Sen. Ted Cruz, the Republican incumbent, in the fall. The top-of-the-ballot contest has drawn headlines from Texas Monthly to New York Magazine.

O’Rourke said education and immigration are issues that simply cannot be ignored in 2018. He also had a lot to say about veterans’ issues.

He said he wanted to represent “those vets that are fighting tonight, for all those who have protected and defended, for school teachers who are stretching every penny.” He also emphasized a key part of his message objecting to the current administration’s immigration policy, saying, “With one hand we can stop the bad stuff — taking little kids from their parents.”

In a press conference outside Fort Hood Friday, Cruz claimed the “far left” is filled with rage against the president, which causes millions to flow into the state from Democratic partisans. He said these efforts will result in record Democratic turnout on Nov. 6.

“The good news is, in Texas there are a whole lot more conservatives than liberals,” Cruz said. “So, politically, the task we have is to turn out conservatives.”

Cruz did not respond to repeated requests for comment for this article.

O’Rourke did not mention Cruz or the president by name in his remarks. He did spend almost an hour speaking and another hour in this Hill Country town posing for photographs and accepting campaign checks — and taking criticism.

One audience member in the back-and-forth caused a stir by telling O’Rourke that his solutions relied on big government. O’Rourke allowed him to ask the first question.

Asked later whether he’d ever been called a Marxist before, O’Rourke said simply, “No,” and then smiled and put his arms around a couple of Lampasas residents for another photo.

O’Rourke has visited Killeen three times and has visited Fort Hood. He insisted a jump from Temple to Lampasas was not an attempt to bypass Killeen or Fort Hood.

“We have not skipped Killeen in any form,” he said, noting his previous visits and promising to be in Bell County again. He said the answers to Bell County’s perennial budget issues and employment concerns were part of his platform. He emphasized education, teacher pay, and “reliable high-speed internet for rural areas and cities.”

O’Rourke bemoaned the lack of universal pre-kindergarten and the failures he attributed to underfunded health care. “People are dying of the flu and of diabetes” in one of the richest countries on Earth. “We must pay for this,” he said.

The Congressman also said the U.S. should regulate and tax marijuana. “What if we decided we were going to end the war on drugs?” he asked, noting the failures of the long-running war and the victory of “the black market.”

O’Rourke is married with three children, and he said his commitment to his family drives him on issues like climate change and immigration.

One veteran, April Martinez, from Copperas Cove, stood and told the Congressman about her experience as a disabled veteran. She said she had endured migraines for years now, “without a minute pain-free.”

Ashley Miranda, a veteran’s spouse, echoed Martinez, asking what Beto was going to do that was different from other elected officials.

“I want to make sure we hold the Department of Defense responsible,” he answered. “Making sure there are not negative consequences for seeking help.”

In a moment of candor, O’Rourke, a former punk rock band member, said his favorite band was the Rolling Stones and his favorite U.S. president had to be Abraham Lincoln, a Republican.

According to FME News Service, O’Rourke’s morning forum marked his fourth visit to Bell County since he announced his Senate campaign.

During the town hall, O’Rourke addressed a gamut of issues. Those included immigration, health care and education. He also took several questions from attendees regarding marijuana legalization, Social Security reform and veterans issues.

"Crowds surge beyond capacity as Beto visits Lampasas"
Are you kidding?? This clown is another socialist that is running around pandering to the people. He will do nothing but get in office and push liberal and socialist ideologies into the state and the nation. SAY NO TO BETO!

So many people are hungry for a positive message these days, and no more of the "us vs. them". We want to feel like we can come together as Americans, even if we don't always agree, and work together to solve problems. Mr. Beto O'Rourke has that posiitive message of working together for solutions, and not demonizing other Americans. I really like that about him, and it is something my family can really be for.

Why was a handgun carried by a law abiding citizen an issue for the liberal Killeen daily herald? Was anyone threatened by it? Were any laws broken? Did the individual carrying make any threatening moves? No he did not. Just another example of the fake news media trying to create an issue where none exists.