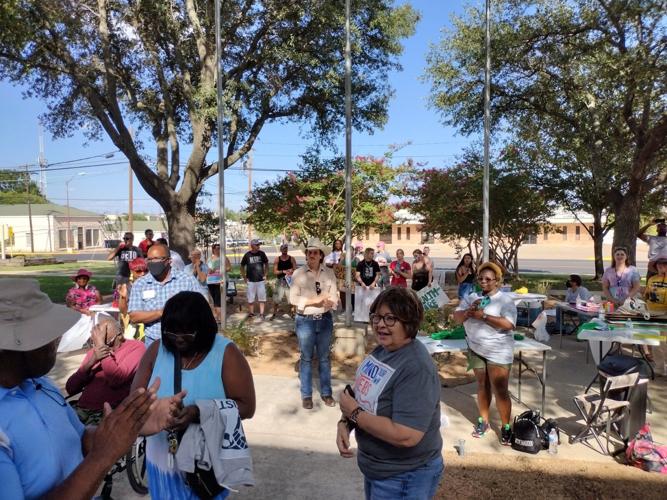 Dozens of people gather outside of the Killeen City Hall on Saturday to protest restrictions to women's rights and bodily autonomy. 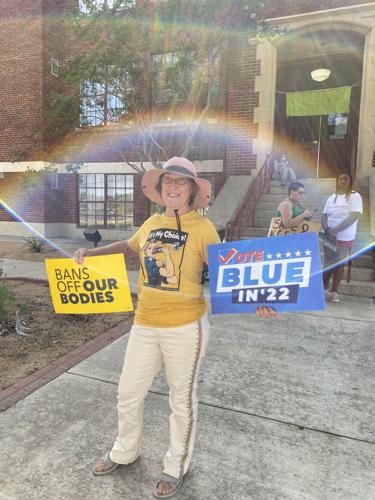 Nancy Pfiester holds two posters at a protest on the Killeen City Hall grounds as a glare gives a rainbow effect around the signs. Nearly four dozen people gathered to protest restrictions to women's rights and bodily autonomy. 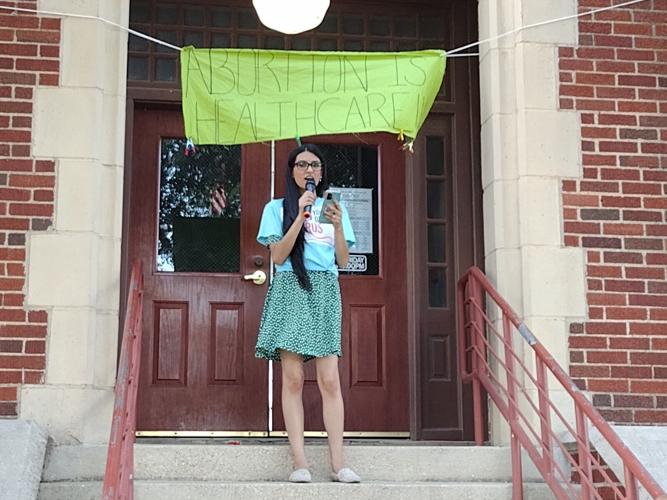 Karishma Talbott gives opening remarks prior to the beginning of a protest at Killeen City Hall on Saturday. Nearly four dozen people protested restrictions to women's rights and bodily autonomy.

Dozens of people gather outside of the Killeen City Hall on Saturday to protest restrictions to women's rights and bodily autonomy.

Nancy Pfiester holds two posters at a protest on the Killeen City Hall grounds as a glare gives a rainbow effect around the signs. Nearly four dozen people gathered to protest restrictions to women's rights and bodily autonomy.

Karishma Talbott gives opening remarks prior to the beginning of a protest at Killeen City Hall on Saturday. Nearly four dozen people protested restrictions to women's rights and bodily autonomy.

After having gone to Austin nearly daily in the aftermath of the U.S. Supreme Court ruling overturning Roe v. Wade a month ago, one local woman organized a rally of her own. What she described as "only the beginning" drew a crowd of nearly four dozen to the steps and lawn of Killeen City Hall on Saturday.

“I don’t think enough people, and in small areas of Texas, are talking about how this affects us directly in the small areas,” said Zoe Bennett, who organized the protest.

Bennett, a Killeen resident, recently started an organization called Bell County for Pro Choice. Bennett said going to Austin helped her to receive tips on how to organize a rally of her own.

The United States Supreme Court overturned Roe v. Wade on June 24. The law established women’s constitutional right to abortion and privacy and became law after a Supreme Court ruling in 1973.

At Saturday’s protest, several people held signs that displayed a message that abortion is health care. One also had a sign that depicted a coat hanger and read “This is not health care.”

Bennett cited a high domestic violence rate in Central Texas and said that without access to abortion, women will try to get rid of a fetus themselves.

She also mentioned the rate of rape and maternal mortality rates in the state of Texas.

“Before I had started this organization, I didn’t realize how high the maternal mortality rate in Texas was. And it’s honestly really scary,” Bennett said.

According to the U.S. Centers for Disease Control and Prevention, maternal mortality is defined as when a woman dies during pregnancy, at delivery or soon after delivery.

According to worldpopulationreview.com, Texas has a maternal mortality rate of 34.5 mother deaths per 100,000 live births.

Not long after announcing the event on TikTok, Bennett said she had people making hateful comments about the rally.

It was on TikTok, however, where James Berry and his wife saw the need to offer their support.

“Killeen being a really diverse area and still being very conservative is unnerving,” Berry said. “But it’s ... dangerous when our population here is as thick as it is, as diverse as it is, with large families and things like that and no one’s doing anything.”

Berry said the protest shows people that elections and votes do count.

Being a husband and father of a 16-year-old daughter, Berry said supporting the protest was an obvious choice.

“It affects them and it affects us directly,” Berry said. “The tiniest part of a child’s life belongs to me at the very beginning — the absolute tiniest. The most consequential role in that child’s life before it’s ever born is the woman who carries it. How can I not? It feels wrong to be a man and not support them.”

During the protest, political candidates and local leaders had a chance to speak.

This protest was amazing!! Thank you to everyone who came out and supported everything that was happening. The turn out was great and the candidates that came out to support were amazing!! This was an awesome awesome event!!

Abortion is NOT health care. It is the murder of a baby. How decadent this country has become when people are protesting for the right to murder a baby. You are truly moral invalids

Have you heard the story of the woman in Houston his water broke at 17 weeks? If abortion is in healthcare then you believe that women who have complications should be forced to give birth to dead fetuses…. You believe victims of rape and incest should be forced to carry that fetus to term… That’s very disgusting maybe you should check your own morals before trying to comment on somebody else’s.

Events like this need to happen as often as possible to show our politicians the real face of this city, county and state.

So I see, by allowing them to hang banners from City property, the City of Killeen government is endorsing this group and its activities. Showing favoritism to specific groups while denying others is against the law. Even in Killeen!

We put in an application to have a peaceful rally at city hall. If another group wants to do this they need to take the same steps we did. There is no favoritism. We just excersied our first amendment right "freedom of assembly."

Normally I would have gone to one of these for womens rights.

But to be honest, the same group advocates people need to wear mask and get a shot.

This whole group of of democrats are sending the wrong message and what is worst they have set women back. It is a slap in the face to my great grandmother, my mother and all the females who have fought so hard.

Walk away from this group, run if you have to.

Can’t vote for a bell county democrat or any democrat after seeing these political stunts being pulled with Killeen Tx city hall as the back drop. Just shamful

Please do not comment hateful things like this when you do not know the vaccination status of anyone involved. We were in a large outside space with wind blowing. We all decided to take the risk to gather because this is such an important event. We brought water and snacks to help ensure that those who came did not overheat or incase someone's blood sugar dropped We were prepared. We care for the citizens in this county and the surrounding counties. This was no stunt but a show of solidarity that we do not agree with the laws put in place by Gregg Abbott. We need change and we need it now. If your great grandmother showed up to the rally we would have cared for her like she was our own. Please be more kind in the future and know the facts before speaking on someone else's life. Have a great day.