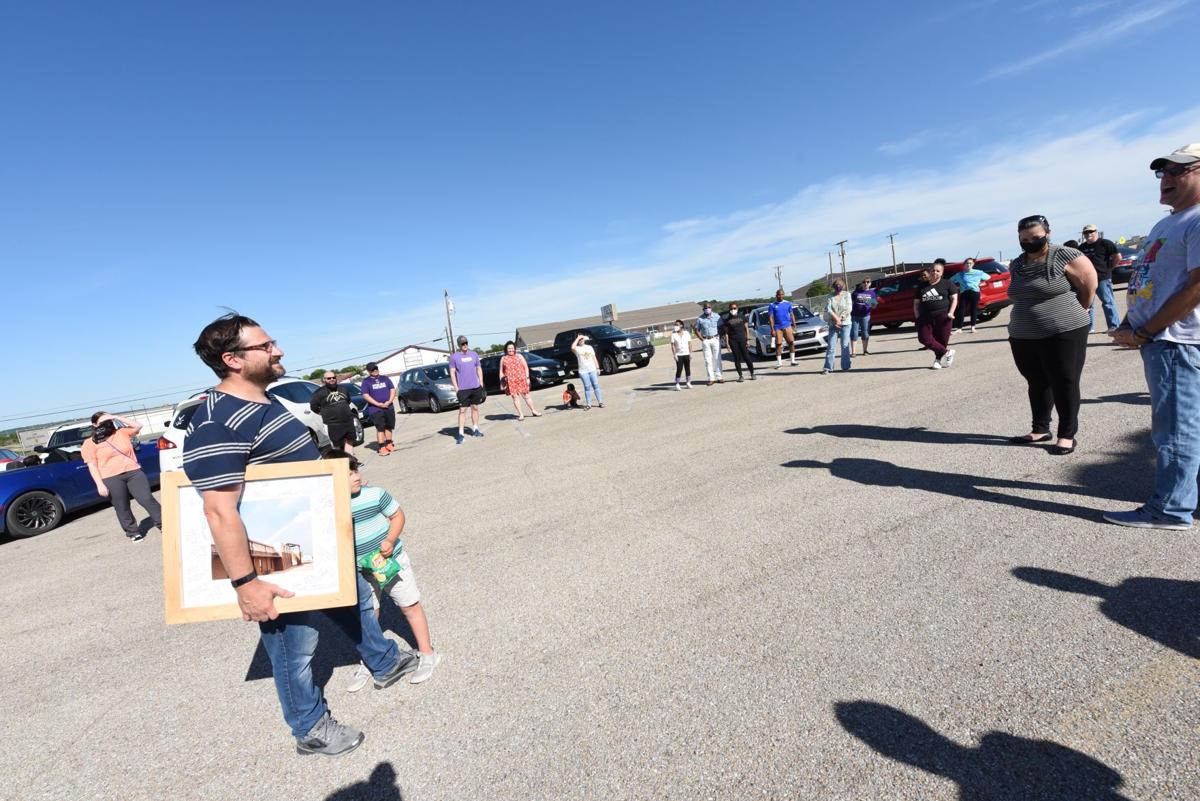 The staff of Eastern Hills Middle School surprised their principal recently, showing up in the school parking lot to cheer on Jeremy Key as he plans to retire following a 28-year education career 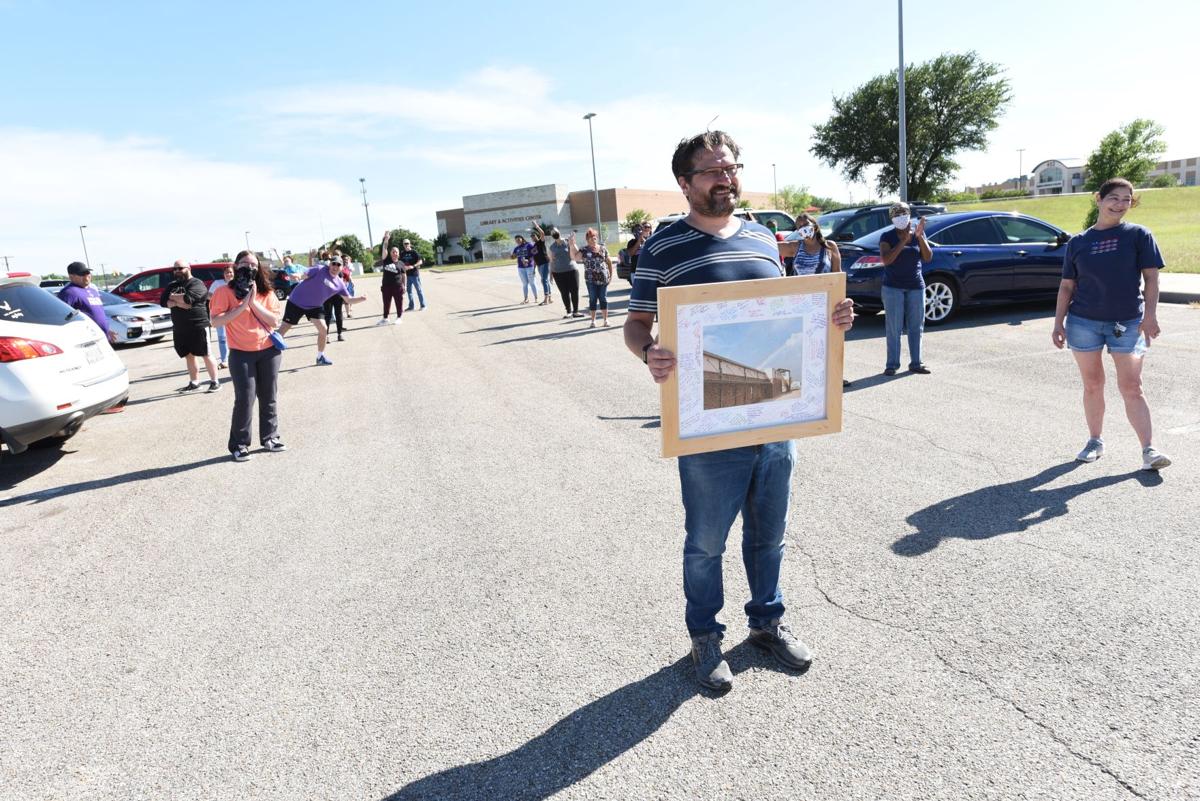 The staff of Eastern Hills Middle School surprised their principal recently, showing up in the school parking lot to cheer on Jeremy Key as he plans to retire following a 28-year education career.

The staff of Eastern Hills Middle School surprised their principal recently, showing up in the school parking lot to cheer on Jeremy Key as he plans to retire following a 28-year education career

The staff of Eastern Hills Middle School surprised their principal recently, showing up in the school parking lot to cheer on Jeremy Key as he plans to retire following a 28-year education career.

Naturally thoughtful and happy to avoid the limelight, the principal of Eastern Hills Middle School was perfectly fine with drifting into retirement at a time when the concerns of the world were fixed elsewhere.

“I’m kind of shy and I was already scheduled to retire,” Jeremy Key said earlier this month. “I figured I wouldn’t have to give a speech. I would just drift into the sunset.”

As it turned out, Key’s staff loved him too much to let that happen.

As the school’s administrators presided over the task of arranging for students’ families to pick up items left in the building prior to spring break, they also planned a surprise for their beloved, retiring leader.

At what would normally be the end of a work day, the principal stepped into the school library, where his secretary and a few administrators greeted him, along with his wife Amy and their daughter and three young sons.

On a table in the library, school staff members arranged a collection of unopened snacks along with some personal parting gifts.

The backdrop was a framed photo of the school building which Burns, a photographer, captured and edited. The enlarged image sat against a matting signed by school staff members and housed in a wood frame courtesy of the school’s longtime industrial technology teacher Bud Ross.

There was also a wood plaque expressing thanks to Key for his 28 years of service in education, all in Killeen ISD.

The low-key principal was visibly surprised and moved.

“It means a lot they would do this,” he said. “I think it means even more that they did it in this environment.”

After taking a few photos and swapping some memories, Burns revealed to his supervisor that there was more and escorted the small group out the front door.

Stepping into a bright-lit spring day, then walking up a rise to the school’s front parking lot, the principal could hear the cheer grow louder.

Forty or so Eastern Hills staff members, many wearing protective masks, turned toward their leader and gave a cheer.

Unable to hug or even shake hands, the principal and the teachers and other staff members made their kind feelings known as best they could.

Out in front of the school facing Indian Trail the word “Congrats” and a heart formed with cups in the chain-link fence provided a public statement of sentiment.

Eastern Hills staff members described Key as a deeply supportive leader whose door was always open and whose commitment to students was undeniable.

“He always wants students to grow,” said Assistant Principal Dennise Wooden. “Growing kids is what he always talks about.”

That commitment to individual student growth translated into Key welcoming students into his office where he often tutored them during lunch and after school. “He tutored kids personally,” Wooden said. “Sometimes he would miss meetings or skip lunch to help a student.”

The middle school principal began his career as a soccer coach in 1992 at Killeen High School. He taught biology and coached there until 2000, when he moved to the newly opened Harker Heights High School.

In 2009, he moved onto Ellison High School and entered administration, then on to Eastern Hills, where he was assistant principal four years, before becoming principal, where he served five years.

Key was born in England and lived most of his young life in Houston, where he became a soccer sensation, attended Midwestern State University on an athletic scholarship and then entered coaching at Killeen High School.

He played a major role in the growth of soccer in KISD, which was a club sport when he started.

During one especially busy year, Key earned a roster spot on an indoor professional soccer team in Houston. The season was mainly in the summer, but in August 1994 he found himself catching late flights to juggle playing professional soccer with teaching at Killeen High.

Now, as a relatively young retired coach-teacher-administrator, he plans to invest in his children — a 14-year-old daughter and three young boys, age 7, 6 and 3 months.

“I have mixed feelings about leaving,” he said. “I will be putting a lot of time into family. During my years of coaching I was gone a lot and even in administration, it takes a lot of time in the evening.”

The past seven weeks, working at home, Key has found solace in sharing breakfast and lunch with his kids and of course, there’s the matter of coaching them up in his favorite sport.

As he stepped away from an education career, Key praised the joys of teaching.

“In education, you see the impact one person can have,” he said. “The numbers of people you can impact – that’s the reward of this job. You get to leave a piece of yourself.”