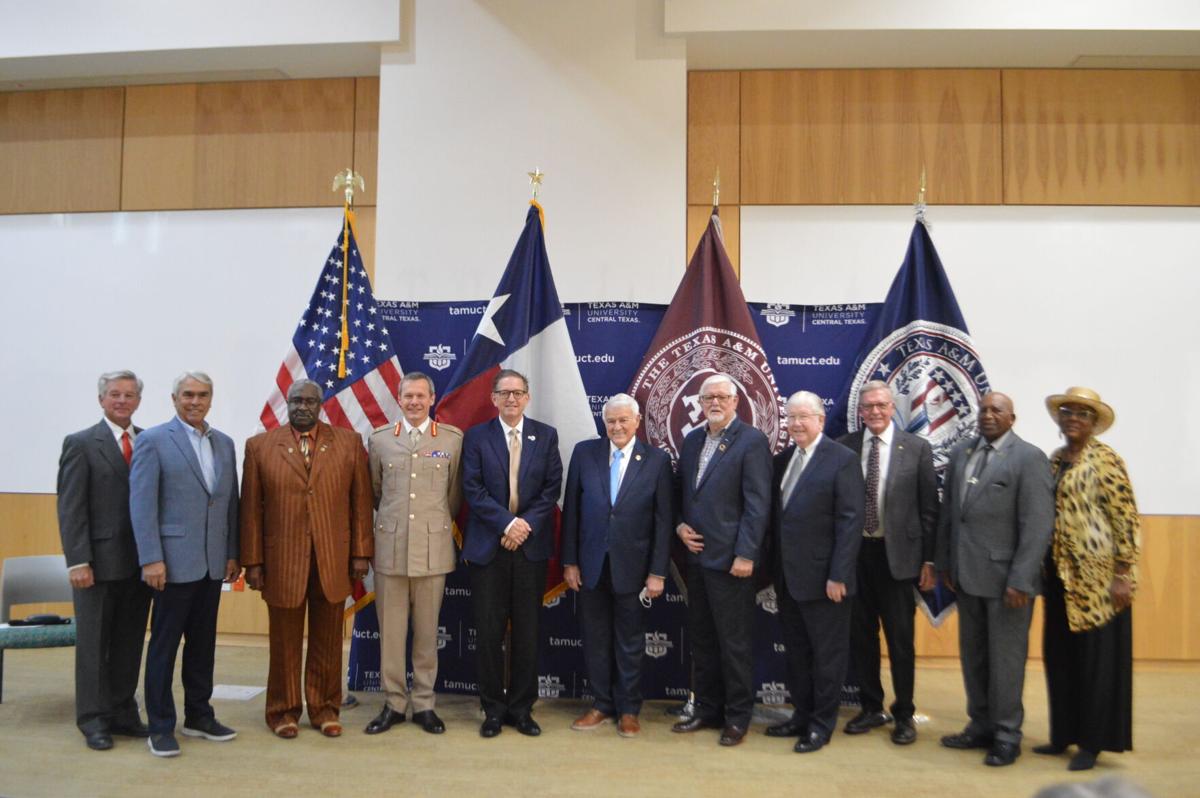 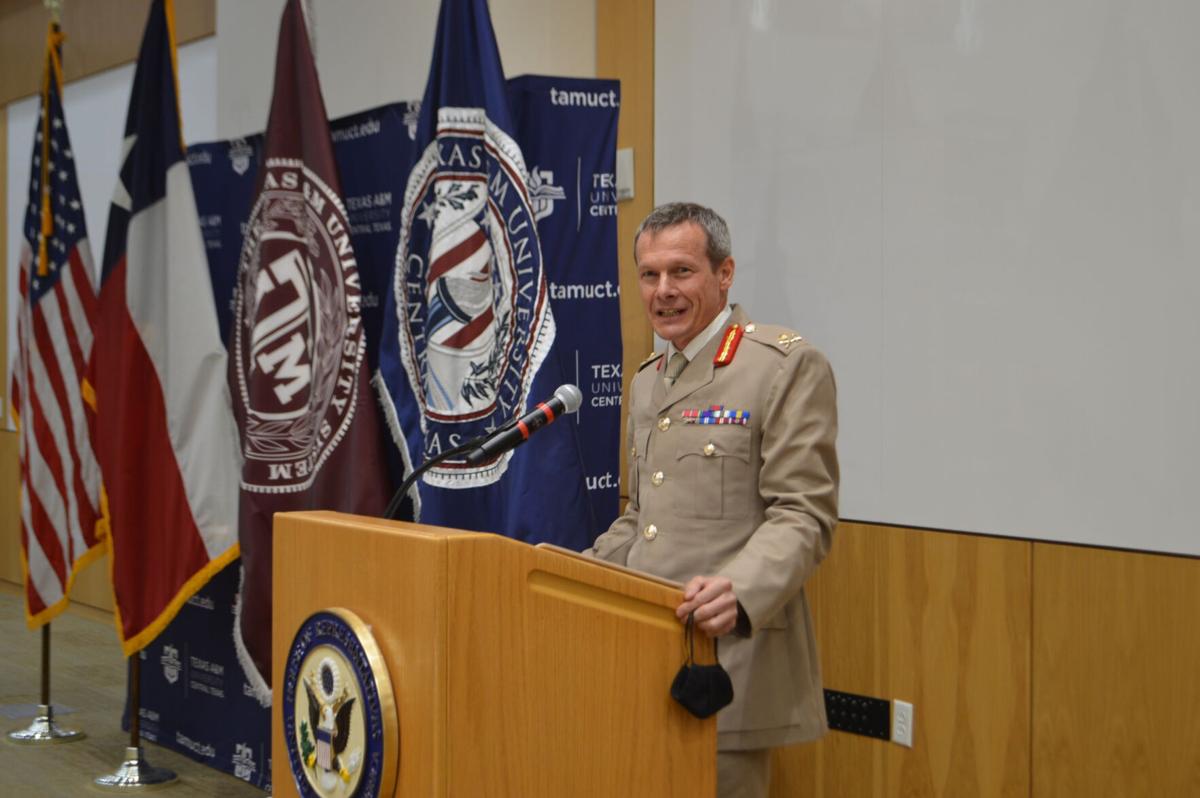 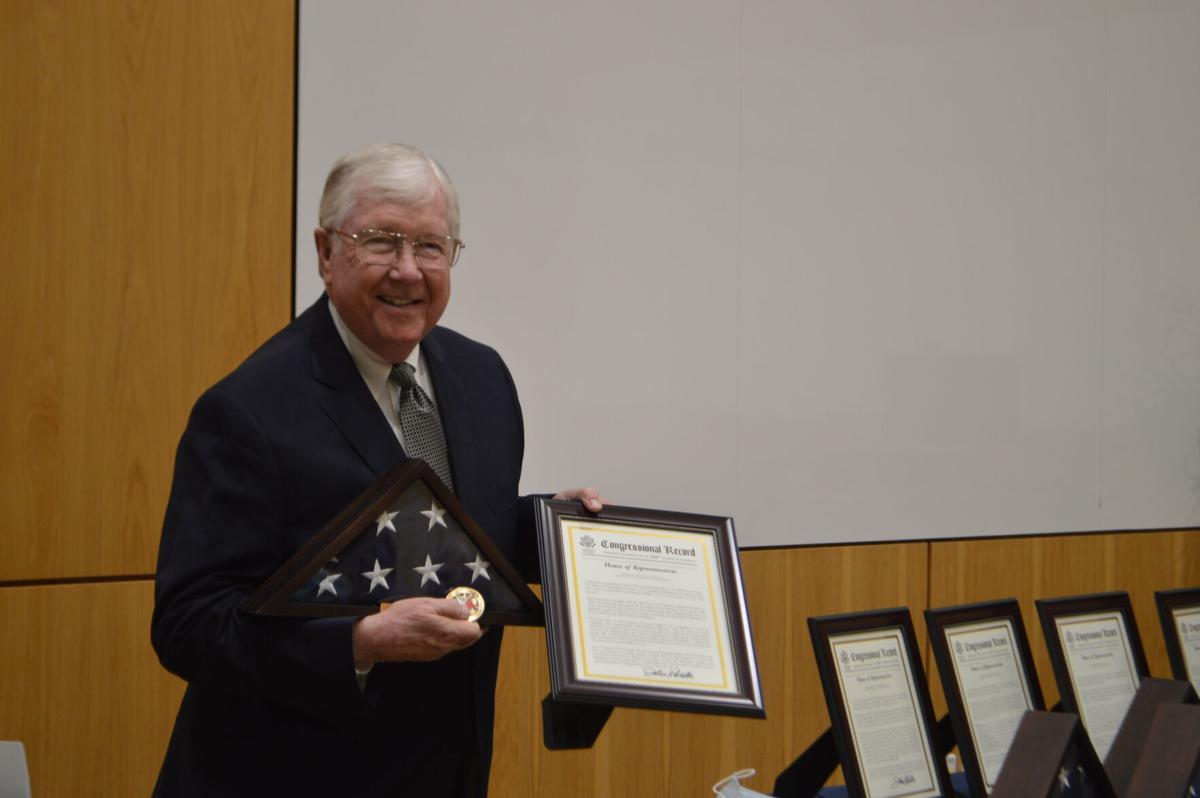 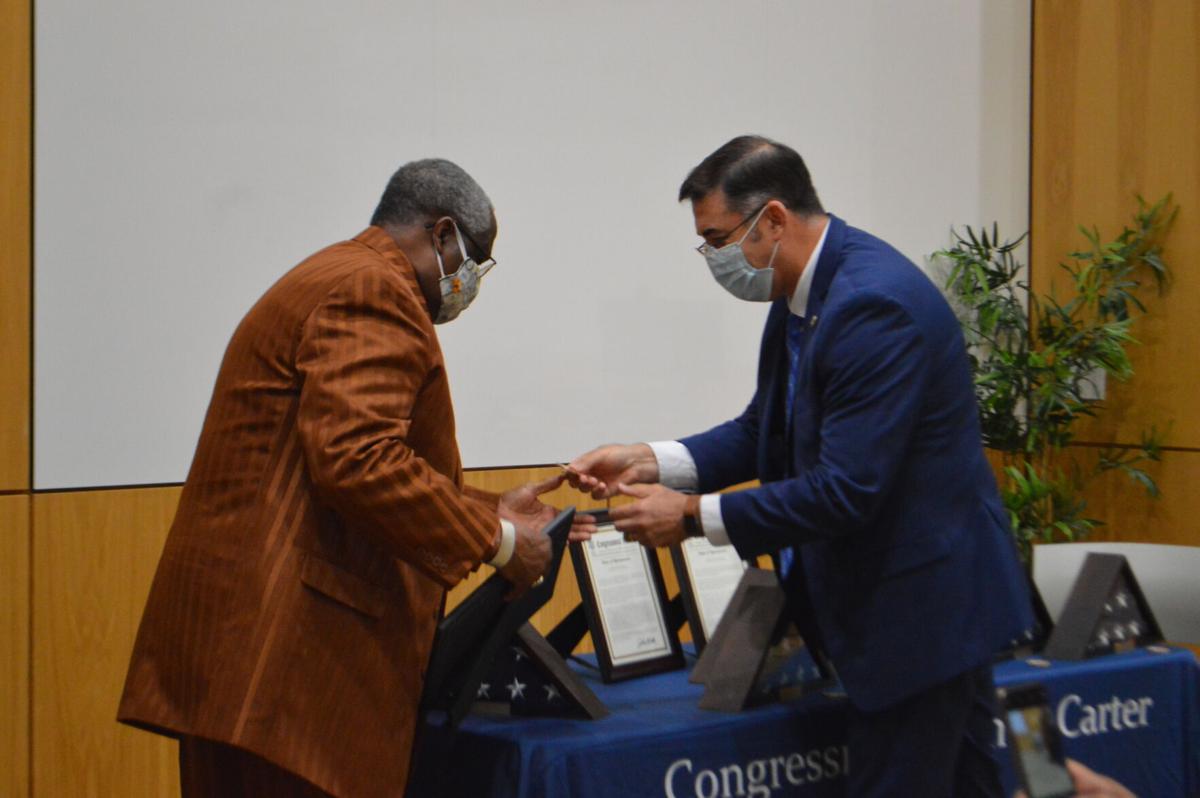 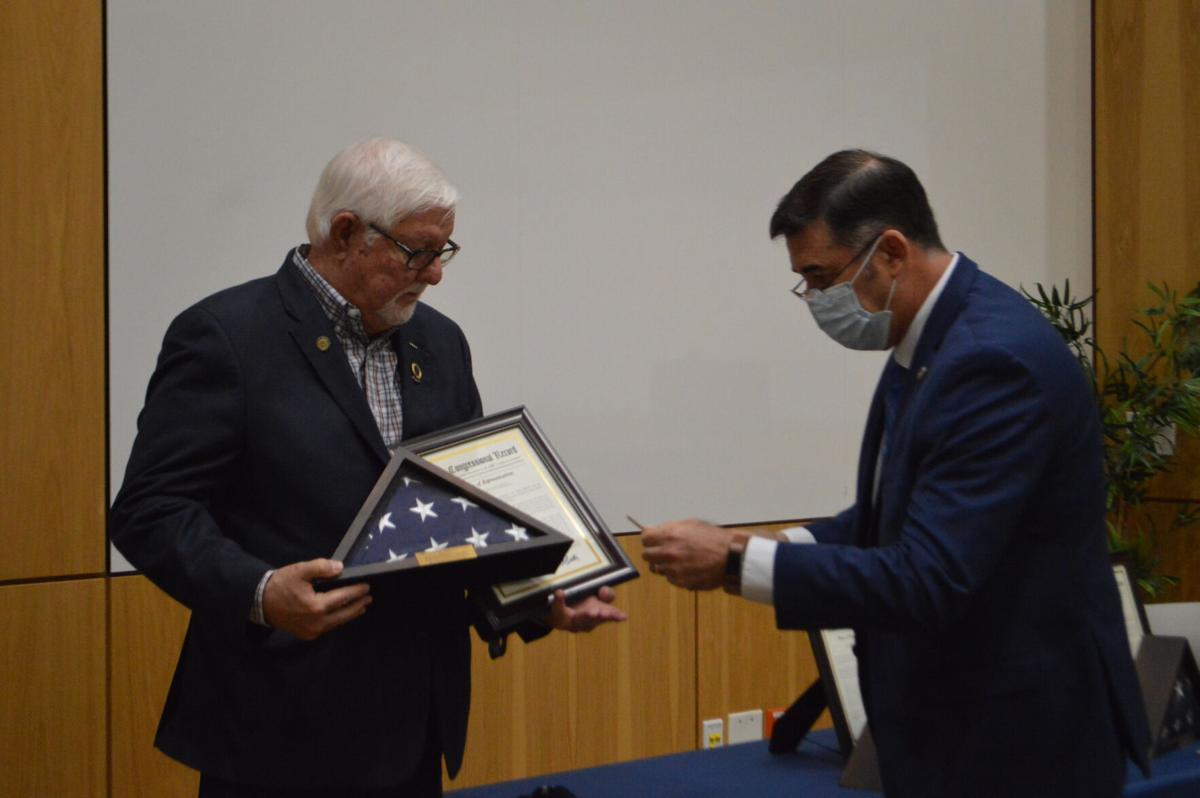 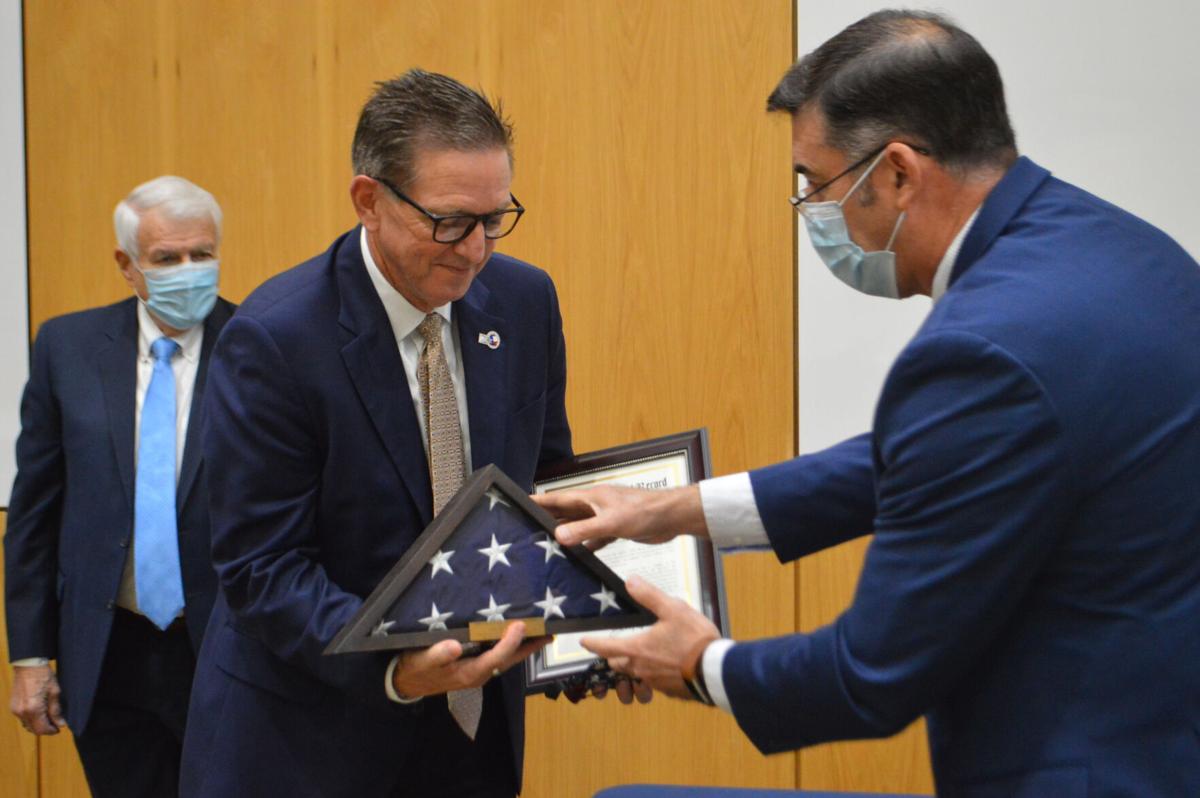 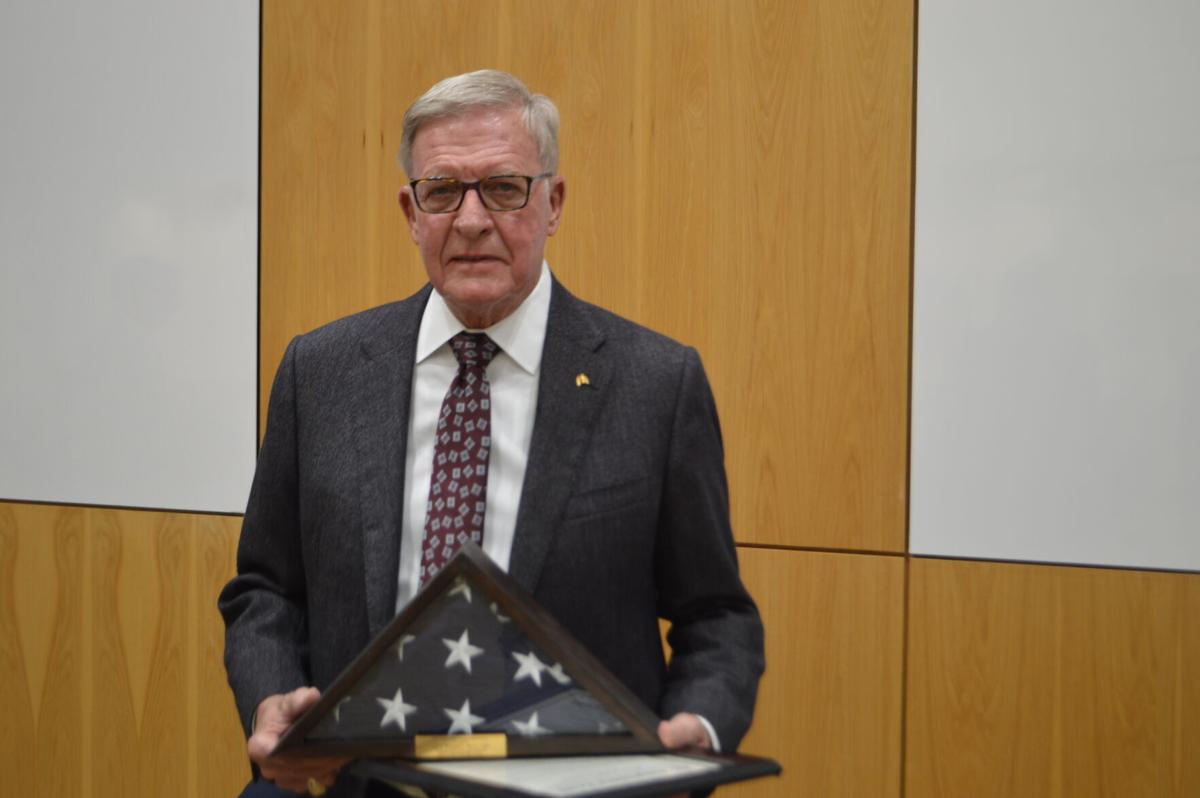 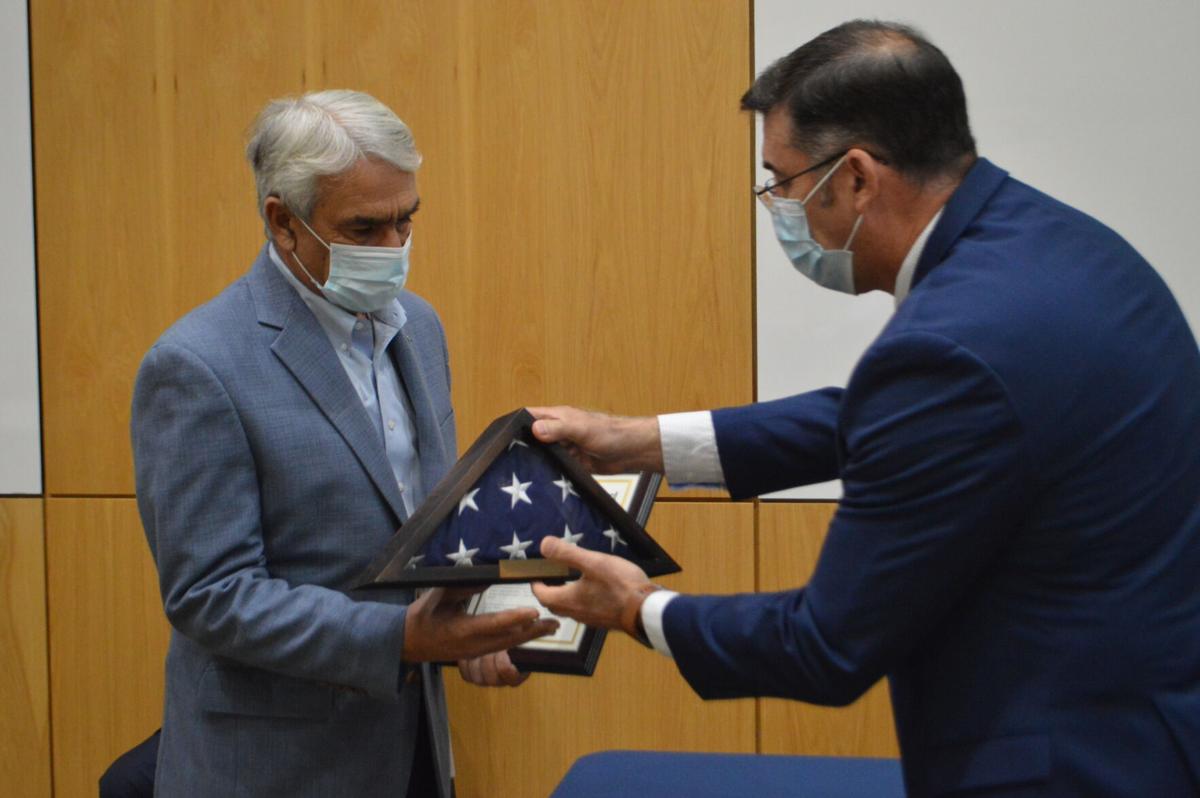 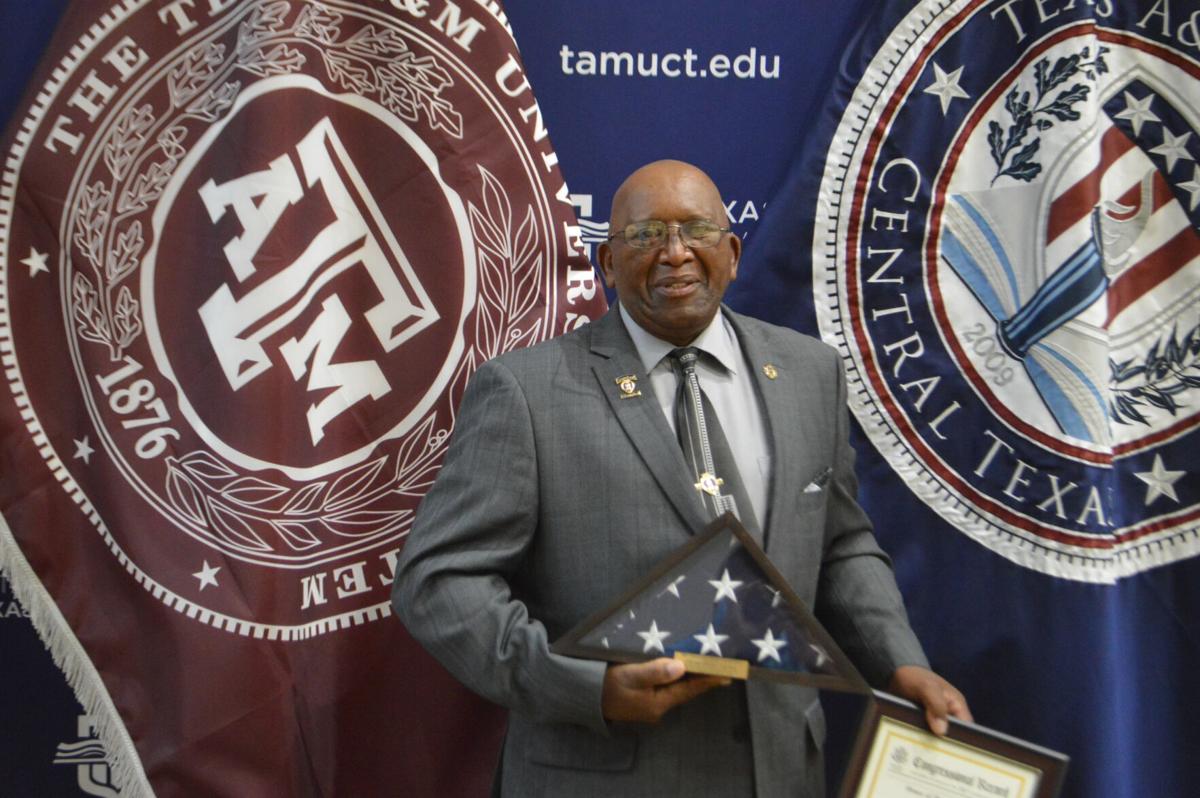 Many of the veterans served in their respective branches of the military for more than 20 or 30 years.

Keynote speaker British Maj. Gen. Gerald Strickland, deputy commander of support at Fort Hood, said experts and academics have looked at the relationship between the Army and the society and concluded that no army can survive unless it has a strong link into the society.

“Having served for 31 years, with deployments and operations around the world as you’ve just heard, I think I can confidently say that I know what outstanding service looks like, both from people in uniform and out of it,” Strickland said at the ceremony. “And here today, I see that level of service being recognized.”

Sonjanette Crossley and Jay Taggart, both members of the Congressional Veteran Commendation Board, each read the commendations of four veterans.

Burrows served in the U.S. Air Force for three decades, the commendation said. He received numerous awards and medals in his career, including the Meritorious Service Medal with three oak leaf clusters.

Burrows, of Temple, served as Bell County judge for 20 years, retiring in 2018.

Footman served for two decades in the Army and served in Vietnam, the commendation said. His awards include a Bronze Star with an Oak Leaf Cluster and two Purple Hearts.

Haynes, who was unable to attend the ceremony, served for 30 years in the Army. His awards include the Legion of Merit, Bronze Star and Meritorious Service Medal with three oak leaf clusters.

Haynes, of Killeen, is currently ombudsman at Fort Hood, for the Army Medical Readiness Program, the commendation said.

Kilpatrick, a Killeen resident, served 20 years in the Army after being drafted at the age of 19. He served two tours in Vietnam. Among his awards are the Silver Star for Gallantry in Action. According to the Department of Defense, the Silver Star is the third-highest combat decoration that can be awarded to a member of the armed forces.

Kilpatrick currently serves as mayor pro tem for the city of Killeen. He also remains active in the Killeen Kiwanis Club and the Killeen Volunteers Incorporated, among others, the commendation said.

Reed served in the Army as a captain and received “countless honors,” the commendation said. It also said, “his military service reflects a man unafraid to devote himself to a higher purpose.”

Reed, who lives in Salado, has served on the Central Texas Council of Governments and has “spearheaded initiatives” such as “enhancing regional transportation, serving veterans, sensible land use, and fighting for the families of our warriors.”

Shine served as a platoon leader in Vietnam when he deployed in 1970.

“His fearless support of our country’s interests abroad serves as a clear testament to his dedication to our great nation and to his commitment to serving others,” the commendation said.

Shine, of Harker Heights, currently serves the community as a realtor, commissioner on the Texas Military Preparedness Commission, member of the chamber of commerce and chairman of the Heart of Texas Defense Alliance.

Whittle served for nine years as an aviator in the Army. He served tours of duty in both Korea and Vietnam, the commendation said.

His awards include the Purple Heart and the National Defense Service Medal.

Whittle, a Temple resident, has been active in the community, including interacting with chambers of commerce as a business representative for open houses and social events.

Williams, who lives in Nolanville, served for 30 years in the Army and earned the Purple Heart in Vietnam when his helicopter was shot down. He began a “lifelong devotion” to others wounded while serving, the commendation said.

He currently serves in multiple veteran service organizations, including the Area Veterans Council, Disabled American Veterans, the VFW, the American Legion, and the Military Order of the Purple Heart.

“This is about your life in our community and what you’ve given of your heart and soul for this community, as well as sacrifices you gave when you served in the military,” Carter said at the ceremony.

Read future editions of the Fort Hood Herald for individual profile features on these and other veterans in the ongoing series “Profiles in Series.”