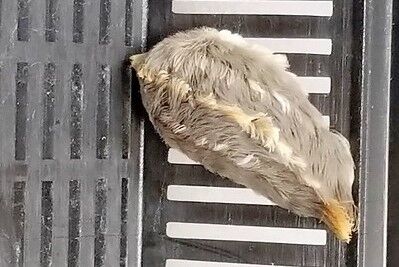 One of the most painful caterpillars in Texas is the southern flannel moth caterpillar, also known as the asp or puss caterpillar. It hides a series of venomous spikes underneath its soft hair. 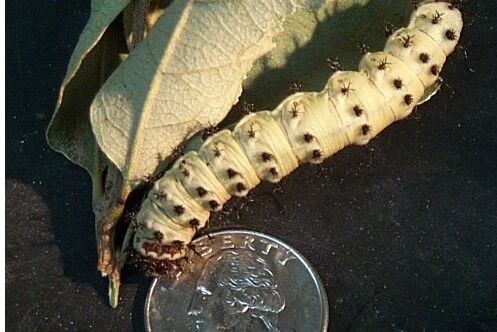 Buck moth caterpillars are venomous insects. Since the caterpillar has multiple generations throughout the year, it can be found during all seasons. 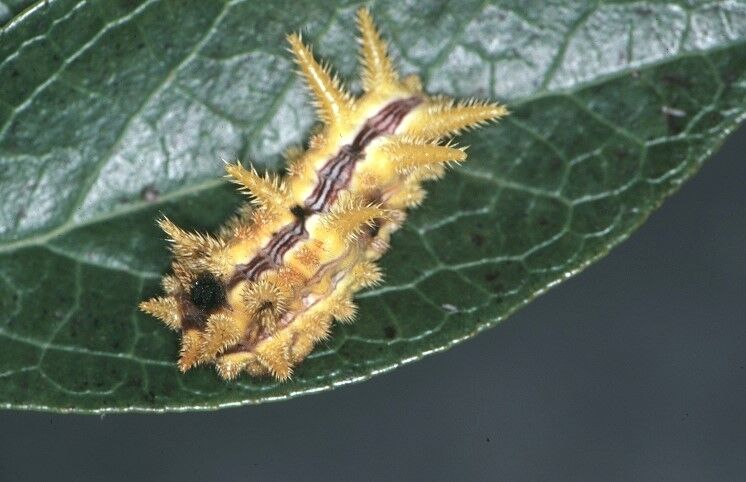 Caterpillars come in various shapes, sizes and colors. While many of them become moths, some become butterflies. Due to their often unusual appearance like the spiny oak slug caterpillar, especially children are tempted to touch them.

One of the most painful caterpillars in Texas is the southern flannel moth caterpillar, also known as the asp or puss caterpillar. It hides a series of venomous spikes underneath its soft hair.

Buck moth caterpillars are venomous insects. Since the caterpillar has multiple generations throughout the year, it can be found during all seasons.

Caterpillars come in various shapes, sizes and colors. While many of them become moths, some become butterflies. Due to their often unusual appearance like the spiny oak slug caterpillar, especially children are tempted to touch them.

Whether you take a stroll through the park or spend time in your backyard — chances are, you come across some caterpillars.

Especially this year, when caterpillar season has dropped with more than the usual amount of the small green, brown and black creatures.

“There are thousands if not tenth of thousands of caterpillars in Central Texas,” said Molly Keck, with the Texas A&M AgriLife Extension Service and an entomologist.

The insects come in various shapes, sizes and colors. While many of them become moths, some become butterflies.

Due to their often unusual appearance, it’s easy to get excited when you see the little creatures inching through your yard. Still, experts recommend avoiding the cute visitors — especially if they are fuzzy.

“I would just avoid it, definitely not touch it,” Keck said.

The reason for caution is the fact that many caterpillars are venomous. Touching certain stinging species can cause contact rashes and painful reactions.

“Usually, venomous caterpillars have hair on them,” Keck said. “However, not every caterpillar that is hairy is necessarily going to hurt you.”

Although not all fuzzy and furry caterpillars are venomous, it’s hard to tell the difference.

“You never know if it’s one of the ones that is going to hurt you,” Keck said.

Their cute and soft appearance makes fuzzy caterpillars especially tempting for children who want to pick them up or pet them.

Killeen-resident Eunice Meyer and her family had to learn that lesson the hard way.

Her daughter Isla accidentally touched a southern flannel moth caterpillar, also known as the puss moth caterpillar. Its long hairs on the top and the sides of its body hide venomous spines. When being touched, the spine breaks off and releases the venom into the skin, causing a painful sting and intense, throbbing pain immediately or within five minutes of contact.

Isla, then 4 years old, experienced extreme pain at the sting site, so Myers decided to take her to the emergency room at Seton Medical Center in Harker Heights.

Doctors treated Isla with a steroid anti-inflammatory medication and antihistamines. She was released to go home after a short observation time.

Since many venomous caterpillars don’t come in the “normal” caterpillar shape, many people who accidentally touch them don’t even know what they had gotten in contact with.

The puss moth caterpillar, for example, is teardrop-shaped and about 1 to 1.5 inches long. Adult caterpillars have blunt wings covered with long, wavy hair. The spines underneath the hair produce a painful rash or sting when touched or brushed against the skin.

Since caterpillars tend to hide, it’s easy to come in contact with them accidentally.

If you are stung, you may feel immediate pain. Reddish-colored spots may appear where spines entered the skin. Some people have a delayed reaction or experience intense throbbing or radiating pain.

“If there is a reaction, go see a doctor,” Keck said. “Everybody is going to react differently, but itching and swelling at the site where the venom touched the skin would be typical.”

Experts also recommend using tape to remove spines that may still be in your skin and wash the affected area with soap and water immediately. Applying an ice pack to the sting may offer some relief.

“There shouldn’t be lasting side effects unless you have some weird allergy,” Keck said. “It’s usually temporary discomfort.”

“Most people don’t like the caterpillar itself because it’s a plant feeder and it will chew on your leaves, but they are food sources for birds and beetles, so they are part of the ecosystem,” Keck said.

Even though caterpillars feed on plants, they don’t always harm them.

“Even if you see a lot of them, it doesn’t necessarily mean that they are eating up your plant,” Keck said. “I would always take a step back and determine ... whether it’s necessary to apply pesticide.”

Once the caterpillars turn into butterflies or moths, they become pollinators.

Although caterpillar season just started, different species will be around all year long.

“The eastern bug moth is what we see right now,” Keck said. “Those have multiple generations throughout the year … Puss caterpillars, which are … the worst of the venomous caterpillars, tend to be more active in the fall, specifically around Halloween.”