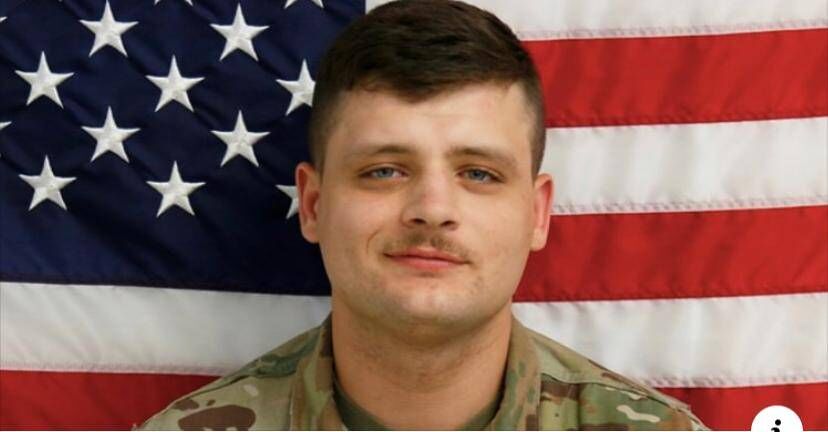 Brandon Rosecrans’s stepfather says his son was raised to be a proud American and to respect the military.

Rosecrans was a brand-new man when he emerged from boot camp, his stepfather says. 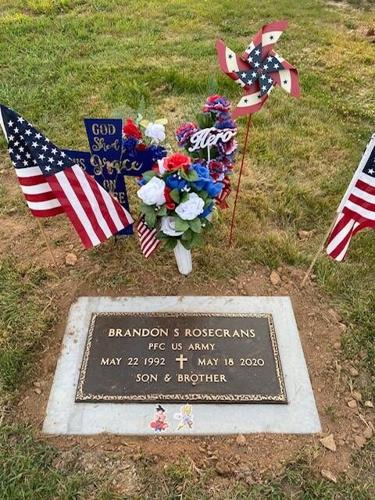 Brandon Rosecrans, a Missouri native, is interred at the Joseph Philibert Cemetery in Kimberling City, Missouri.

Brandon Rosecrans’s stepfather says his son was raised to be a proud American and to respect the military.

Rosecrans was a brand-new man when he emerged from boot camp, his stepfather says.

Brandon Rosecrans, a Missouri native, is interred at the Joseph Philibert Cemetery in Kimberling City, Missouri.

Pfc. Brandon Rosecrans was born to be a soldier, according to a family member who spoke with the Herald recently, but Rosecrans wasn’t fated to die a valiant soldier’s death on some faraway battlefield. Instead, the Fort Hood soldier was shot and killed in Harker Heights while asleep in his Jeep just over 2 years ago.

“He was just trying to help someone out, and he ended up dying,” said Rosecrans’s stepfather Thomas Berg Sr. of Missouri. He raised Rosecrans since the age of 2 years old, along with Rosecrans’s two brothers, in the Ozark Mountain region of the state. “In Brandon’s eyes, the world was nothing but good. He lost his life because he loved everyone and would help anyone, anytime, anywhere.”

It might not be surprising that Rosecrans turned into a soldier because he started fighting at an early age.

“His life started out hard because he was born prematurely,” Berg said. “He was so little. He looked like a little possum. The doctors thought he might not make it, but after four months in the NICU (neonatal intensive care unit), he was able to go home.”

Berg said that Rosecrans showed an early interest in the military.

“Ever since he was a little bitty kid, anytime he saw a soldier in uniform he’d run over to them and shake their hand,” he said. “He always wanted to be a soldier. I raised my boys to be proud of being Americans and to respect the military, but he was special.”

“I couldn’t believe the man that he’d changed into,” Berg said.

Berg said that he thinks that Rosecrans would still be serving his country as a soldier, but it was not to be.

It was May 18, 2020 — just four days before his son’s 28th birthday — when Berg says Rosecrans fell victim to Brandon Michael Olivares and Estrellita Hidalgo Falcon, who had befriended him.

“What happened to Brandon is happening to other soldiers at other bases,” Berg said. “There’s an element of people in every military town that want to take advantage of soldiers, who are away from home and their families. They’re desperate for friendship.”

Berg said that a small amount of methamphetamine was found in his son’s system during the autopsy, but he was adamant that Rosecrans was no drug addict.

“I think it’s likely that they put it in his drink, because he was steadfastly against drugs like meth,” Berg said. “They (Olivares and Falcon) asked him to drive them up to San Antonio to pick up a check for a job they had done. He just said, ‘okay,’ without questioning it. I was told by a person who was there that when he found out there was going to be a drug deal, he got raging mad and went back to the Jeep. It’s likely that he threatened to turn them in to the police and that’s why Olivares shot him. But we’ll never, ever really know why.”

Olivares, 30, has been held in the Bell County Jail since being booked on June 5, 2020. His bonds total $1.1 million on the murder charge and a third-degree felony charge of unlawful possession of a firearm by a felon.

Falcon, 39, was found guilty earlier this month of stealing the soldier’s vehicle and sentenced to 19 months in state jail.

Heights police made their case against Olivares in a six-page arrest affidavit, leaning heavily on cell phone data in their investigation.

A 911 call came into the Heights Police Department on the morning on May 18, 2020, regarding a body on the side of the road near Fuller Lane and Oakridge Blvd. A few minutes later, Heights police were dispatched to a structure fire at Evergreen Estates, near the 1500 block of Farm-to-Market 2410 and Cedar Knob Road, about three miles away from where Rosecrans’s body was located.

There, police found a 2016 Jeep Renegade fully engulfed in flames. It was registered to Rosecrans and another man.

“The fire marshal found what he believed to be a gunshot hole in the back passenger-side door,” according to the affidavit. “…The front passenger seat was reclined almost all the way.”

Police reviewed cell phone data on Rosecrans’s phone and determined that he had been with Olivares the night of May 17 and the morning of May 18, according to the affidavit.

Police later reviewed cell phone data on Olivares’s phone and it allegedly showed his phone “ping” in the approximate location where the Renegade was found.

Olivares allegedly told police several different versions of events. He said that he, Rosecrans and two other people had traveled to San Antonio to purchase narcotics and then drove back to Bell County, which matches cell phone pings.

A witness later told police that Olivares waited until Rosecrans fell asleep to shoot him and had shot him because he was being “too greedy,” according to the affidavit.

The medical examiner later found four gunshot entrance wounds to the soldier’s head and neck. The appearance of the wounds led police to believe that he was shot at close proximity.