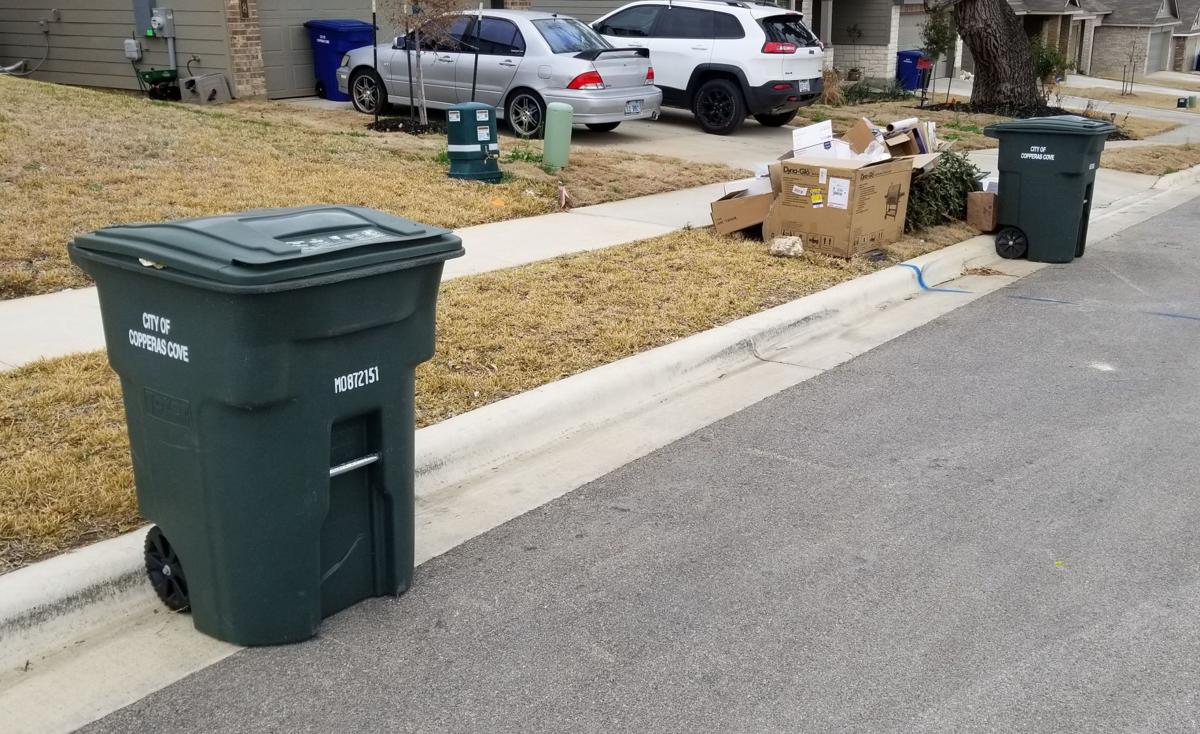 Recycling bins and bulk trash awaits pickup at the curb along Hobby Road in Copperas Cove on Thursday, Jan. 9. 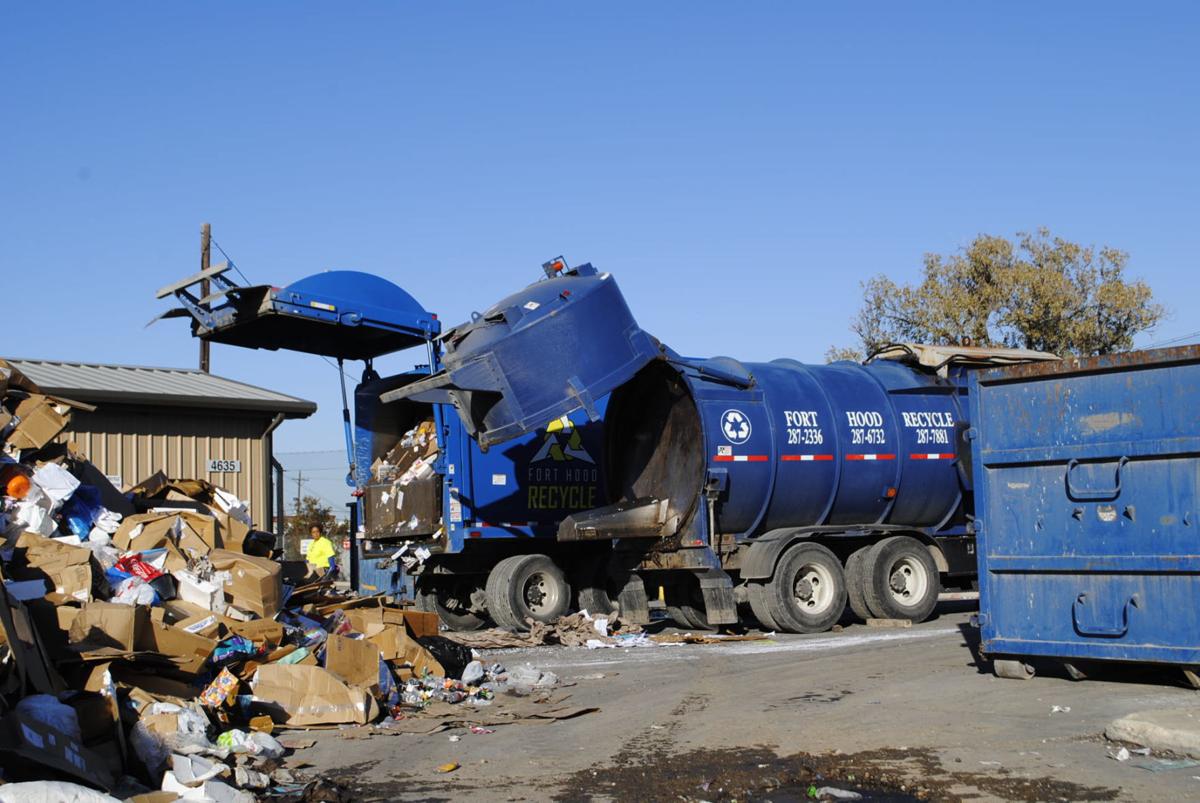 Two recycle trucks unload recyclable materials at the Fort Hood Recycle Center in November. Soon, the recycle center may be seeing trucks from neighboring communities, such as Copperas Cove.

Recycling bins and bulk trash awaits pickup at the curb along Hobby Road in Copperas Cove on Thursday, Jan. 9.

Two recycle trucks unload recyclable materials at the Fort Hood Recycle Center in November. Soon, the recycle center may be seeing trucks from neighboring communities, such as Copperas Cove.

Every other week, Copperas Cove residents set their green bins with cardboard, paper, plastic and aluminum cans by the curbs. Recycle trucks roll through the neighborhoods, collecting the materials.

In neighboring Killeen, curbside recycling pickup service was cut in 2016, when the city struggled to balance its budget after years of overspending.

Under a new law, Fort Hood and all other Department of Defense installations are allowed to have recycling contracts with neighboring cities.

Copperas Cove could be the first area community to take advantage of a possible partnership with Fort Hood under the National Defense Authorization Act for Fiscal Year 2020, signed by President Trump on Dec. 20. Of the many amendments in the extensive document, the one that might have an impact on Copperas Cove and other communities was written and submitted by U.S. Rep. John Carter, R-Round Rock.

Section 314 of the NDAA gives Fort Hood the ability to accept recyclable materials from neighboring communities.

“With the signing of the NDAA, bases are allowed to accept recyclable materials from their local communities and use the profits to improve the installation,” Carter said via email.

Fort Hood’s chief of environmental programs, Timi Dutchuck, said implementation of any partnerships would require a formal interpretation of Section 314.

Emily Taylor, communications director for Carter, said the profits turned from selling the recyclables would go back into Fort Hood’s Morale, Welfare and Recreation funds, something that is already being done by the installation’s recycle center.

For lawmakers and Fort Hood officials, however, it’s not just about the revenue a partnership would generate; it’s about reducing the environmental impact.

“It truly is a win-win-win for the military community, local neighbors, and the environment,” Carter said via email.

Brian Dosa, Fort Hood director of Public Works, said he is excited about the prospect of community partnerships.

“Implementation details are still being worked out; however, we feel this new law represents a great opportunity for Fort Hood and our community partners,” Dosa said via email. “Clearly a win-win.”

When Copperas Cove Public Works Director Scott Osburn stood before the City Council to talk about recycling at a November workshop, he made it clear that the city was about to reach a tipping point.

Copperas Cove was paying $163,335 a year just to collect recycling left at curbside by about 13,000 public works customers and 129 city businesses.

After adding the annual disposal cost of $59,118, Osburn said, the city was paying over $263 a ton to pick up and transport material using its single-stream recycling system.

By comparison, if the city were to treat recycled material as trash and send it to the dump, the cost per ton would drop to about $140.

Osburn made it clear that the council might have to consider ending the city’s recycling program as a way to save about $91,000 a year.

That was the worst-case scenario. Osburn showed that the best case would be for Cove to send its recycling to Fort Hood to reduce the city’s shipping and disposal cost. This was in November, and Osburn was watching progress on the NDAA.

As the bill moved toward passage, the House of Representatives approved Carter’s language allowing the use of military recycling facilities by local communities. But the version of the NDAA passed by the Senate did not have that authorization. The city contacted Texas Senators John Cornyn and Ted Cruz, asking for their help.

City leaders breathed a sigh of relief when the final version of the bill included the desired authorization and was signed by President Trump.

While Fort Hood has permission to accept recycling, the mechanism to begin doing that still needs to be put into place.

The time frame for beginning a community partnership with Copperas Cove hinges on a few different things, according to Dutchuk.

First, she said, the potential partnerships depend on formal acceptance of Intergovernmental Service Agreements between Fort Hood and the neighboring communities that wish to participate, such as Copperas Cove.

Copperas Cove City Manager Ryan Haverlah concurred with that assessment, saying in an email that there could be no timeline for implementation until the agreement is in place.

Each Intergovernmental Service Agreement would also need to be approved by the Installation Management Command at Fort Sam Houston in San Antonio.

Dutchuk said she does not anticipate any operational changes need to be made in order to accommodate Copperas Cove’s materials, but a large-scale acceptance of off-post recyclables would require details to be worked out.

“Modest estimates conclude that substantial amounts of additional materials can be processed while maintaining a single work shift,” Dutchuk said via email.

The cost for a community partner, according to Dutchuk, would be just the cost of shipping the materials to post.

Dutchuk said the cost could be less than current expenditures “due to Fort Hood’s close proximity to neighboring communities.”

Copperas Cove’s Haverlah and Osburn say they could realize significant savings once the agreement is implemented.

Currently, both Fort Hood and Copperas Cove participate in single-stream recycling, meaning that all recyclable material except glass is collected in the same bin and separated at the respective recycling centers. Fort Hood collects glass in a separate bin.

Dutchuck said if the partnerships happen, the recyclable materials that come from the neighboring communities would be Fort Hood property, and the post would be able to use the money generated from selling it.

For cities that do not have curbside recycling programs, a partnership with Fort Hood could incur startup costs, such as costs for containers, collection vehicles and quality assurance to prevent contamination.

Copperas Cove could only be the beginning.

“Note, the plan is to begin with an IGSA (Intergovernmental Service Agreement) with Copperas Cove, and other communities could be considered after Copperas Cove is fully integrated,” Dutchuk said via email.

In other words, Fort Hood could, in the future, also consider entering into a partnership with Killeen.

Jeff Reynolds, Killeen’s assistant director of public works, told the Herald his department has heard about the National Defense Authorization Act’s new language and looks forward to the possibility of working closely with Fort Hood to expand Killeen’s recycling programs.

Although there is not curbside pickup, Killeen residents can take recyclables to the Killeen Recycling Center, 111 East Avenue F. Acceptable items include all types of paper, cardboard, #1 and #2 plastics, glass bottles and jars and steel, tin and aluminum cans, according to the city website. There are also four recycling drop-off areas, two of which are mobile recycling trailers.

The recyclable materials that currently have value in the market are processed and sold. The department sells most recyclables to CenTex Scrap & Metal, Evergreen Fiber and Sunbright Recycling.

Reynolds said bringing curbside recycling back would be the decision of Killeen City Council.