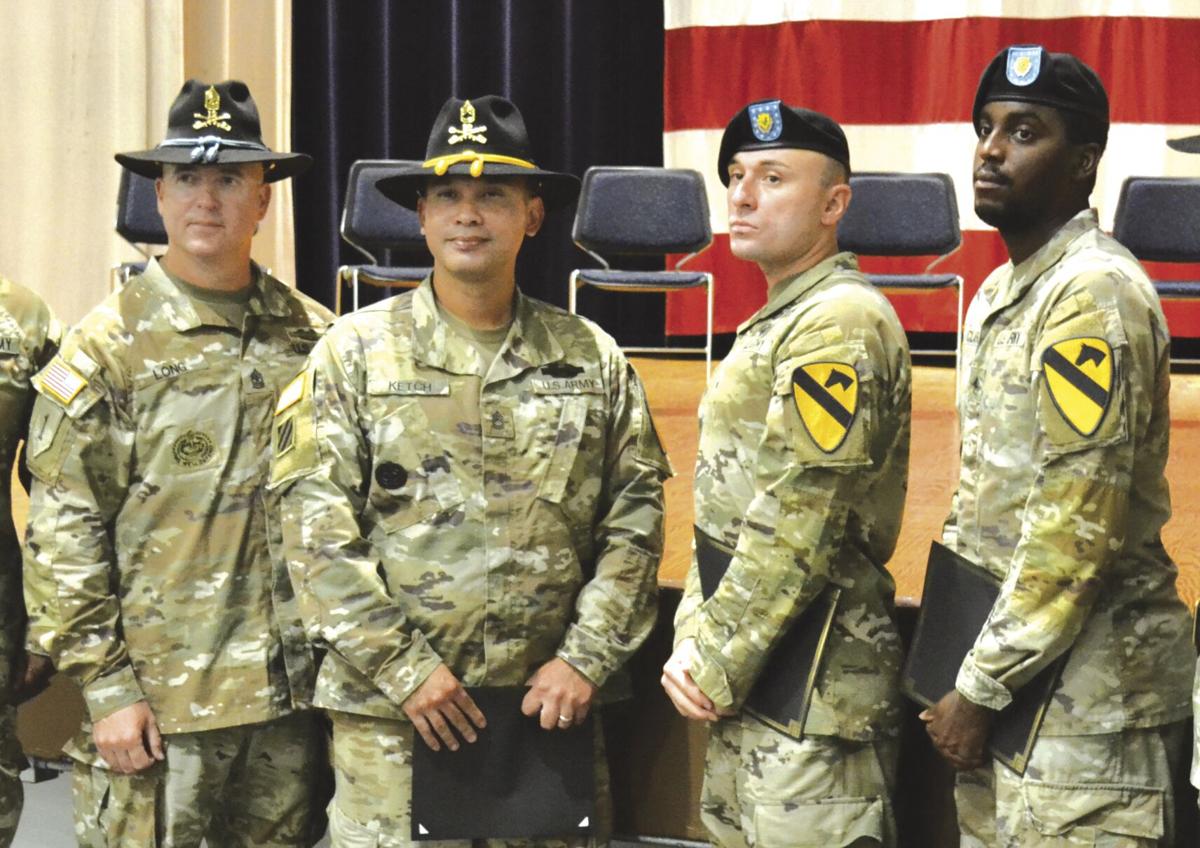 The three soldiers given awards pose with supervisors. 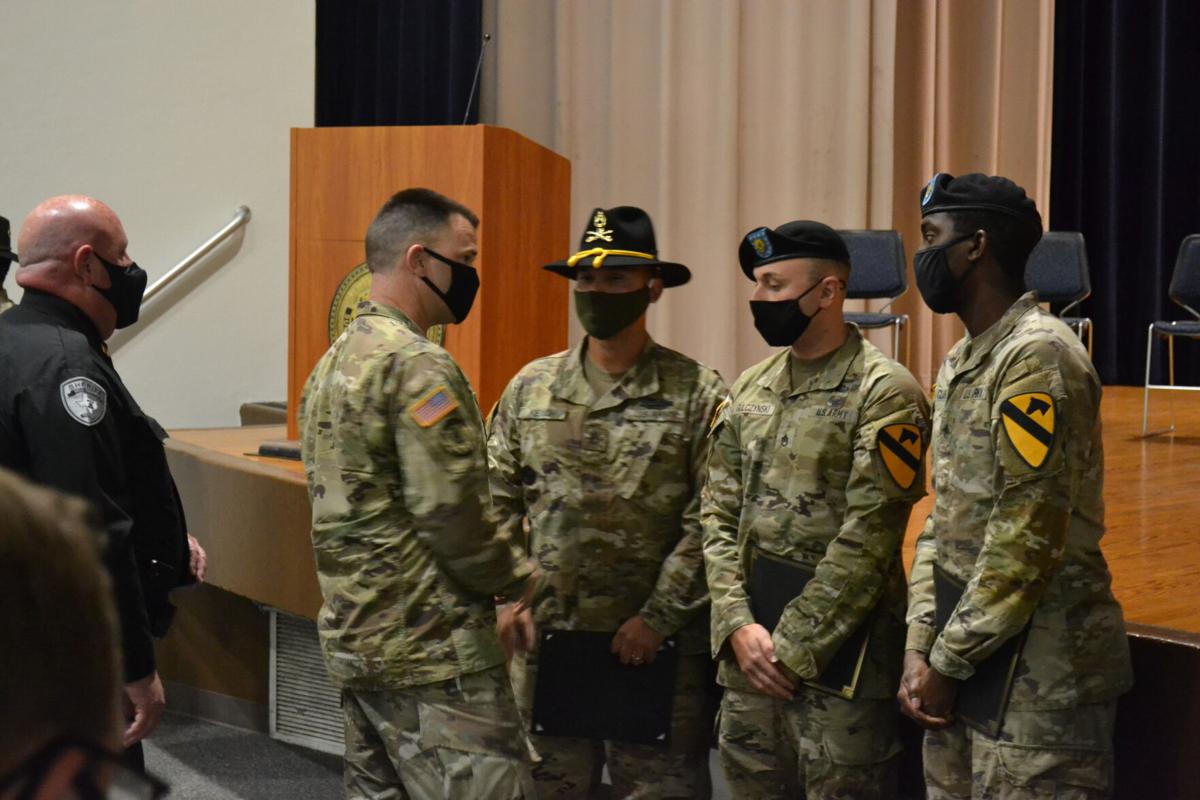 The Fort Hood soldiers are being congratulated by fellow military members and Belton Police after the ceremony. 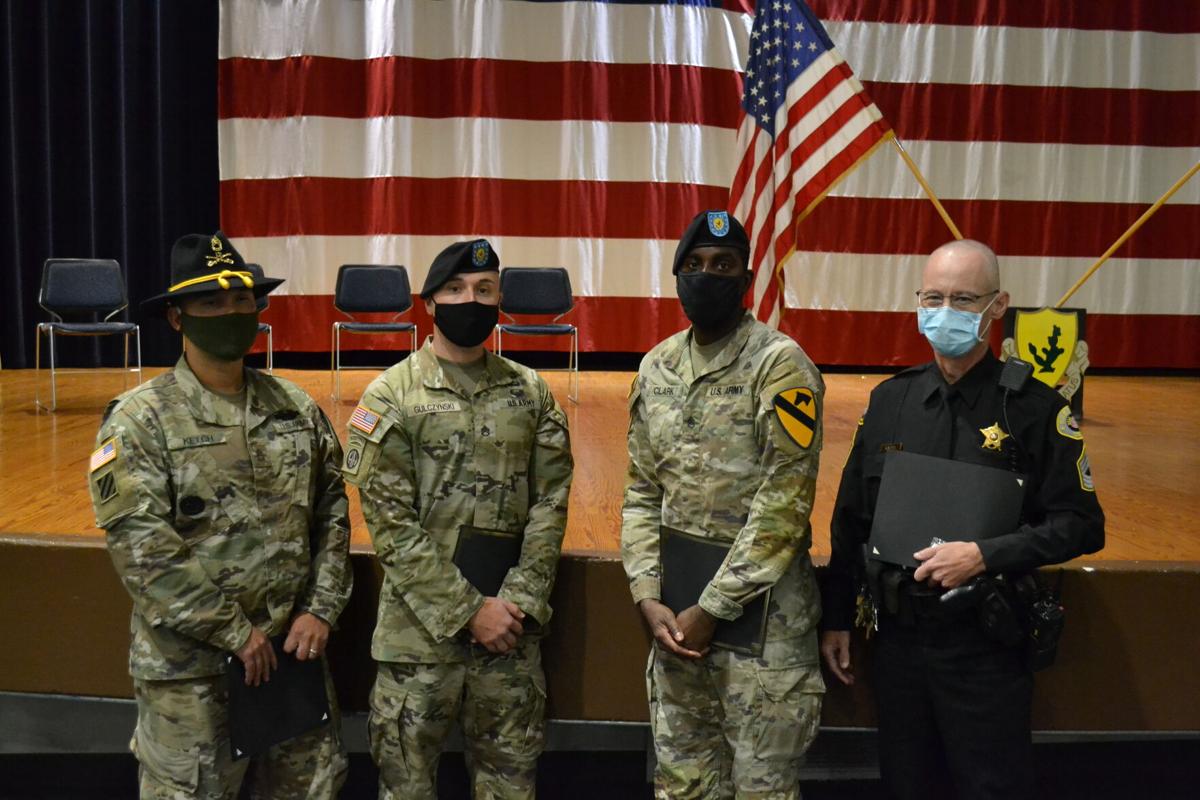 Three soldiers and one deputy were awarded the lifesaving award by Belton PD after saving another soldier's life. From Left to right are NCO Nichols Ketch, Sgt. Stephen Gulczynski, Sgt. Corey Clark, and Deputy C.M. Wilcox.

The three soldiers given awards pose with supervisors.

The Fort Hood soldiers are being congratulated by fellow military members and Belton Police after the ceremony.

Three soldiers and one deputy were awarded the lifesaving award by Belton PD after saving another soldier's life. From Left to right are NCO Nichols Ketch, Sgt. Stephen Gulczynski, Sgt. Corey Clark, and Deputy C.M. Wilcox.

FORT HOOD — Three troopers from the 2nd Battalion, 12th Cavalry Regiment, 1st Cavalry Division and a Belton police officer were given the Bell County Sheriff’s Department’s Life Saving Award on Thursday during a ceremony at Howze Auditorium honoring their actions.

The four men who were recognized are responsible for saving a soldier’s life on June 16. The soldier in question was attempting to commit suicide but was rescued and given medical attention.

The following information is excerpted from the police report taken on June 19:

Sgt. C.M. Wilcox with the Belton Sheriff’s Department was dispatched to a suicide threat at Chalk Ridge Falls park in Belton. He arrived at the scene and approached the soldier who was siting on a railed ledge above the Stillhouse Lake Reservoir but was unable to get a line of communication going, the police report said.

Sgt. Stephen Gulczynski approached the officer and explained he was the platoon leader in the soldier’s unit. Sgt. Gulczynski was able to communicate with the soldier and the two would step closer to the ledge each time the soldier was distracted, the police report said.

Sgt. Corey Clark and Sgt. Nicholas Ketch also arrived on the scene and began talking with the solider, trying to convince him to climb back to the safe side of the railing. Both men were in the soldier’s platoon and worked closely with him, the police report said.

Sgt. Ketch continued to distract the soldier and the others got closer. Once the men were close enough, Sgt. Clark grabbed the soldier’s right arm, Sgt. C.M. Willcox grabbed his left arm and Sgt. Gulczynski took the soldier into a bear hug to prevent him from falling off the ledge. The three then pulled the subject back to the safe side of the railing, the police report said.

“I didn’t really feel anything, I just reacted,” Sgt. Clark said about the incident. “I just didn’t want him to die.”

Clark said he is still in contact with the soldier and talks with him every day.

Sgt. Maj. Jerry Long was one of the officials giving the awards Thursday. He explained in his opening statements that he was very proud with of the troopers.

“The word ‘hero’ nowadays is used quite broadly to refer to many different things, but these guys are the definition of hero,” Long said. “They took time out of their lives to save another. They didn’t have to be on that bridge, but they were.”

During the ceremony the four men were given certificates by Sheriff Eddy Lange. The three troopers were also awarded Army Achievement Medals by their commanding officers.

“I feel proud and honored of my husband,” Sgt. Gulczynski’s wife, Cabrini Gulczynski said after the ceremony. “I think all three of them being about to help somebody see another day is just courageous in itself.”