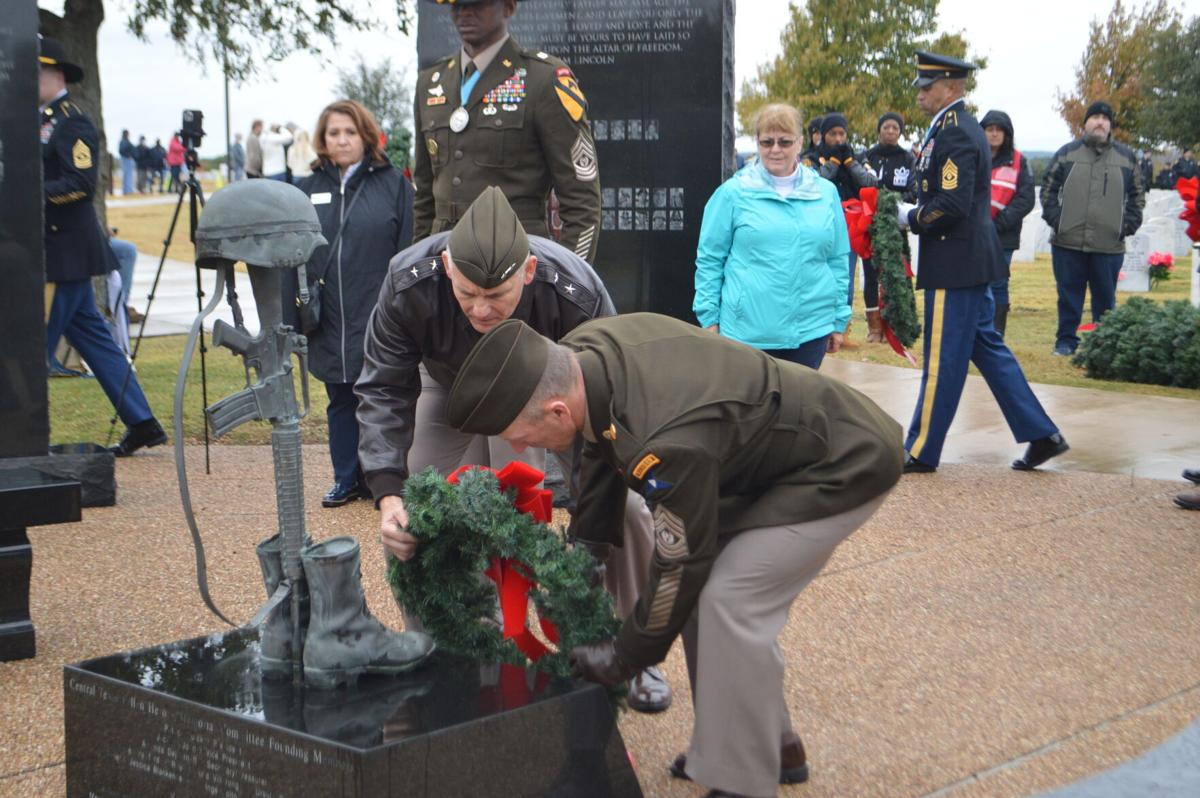 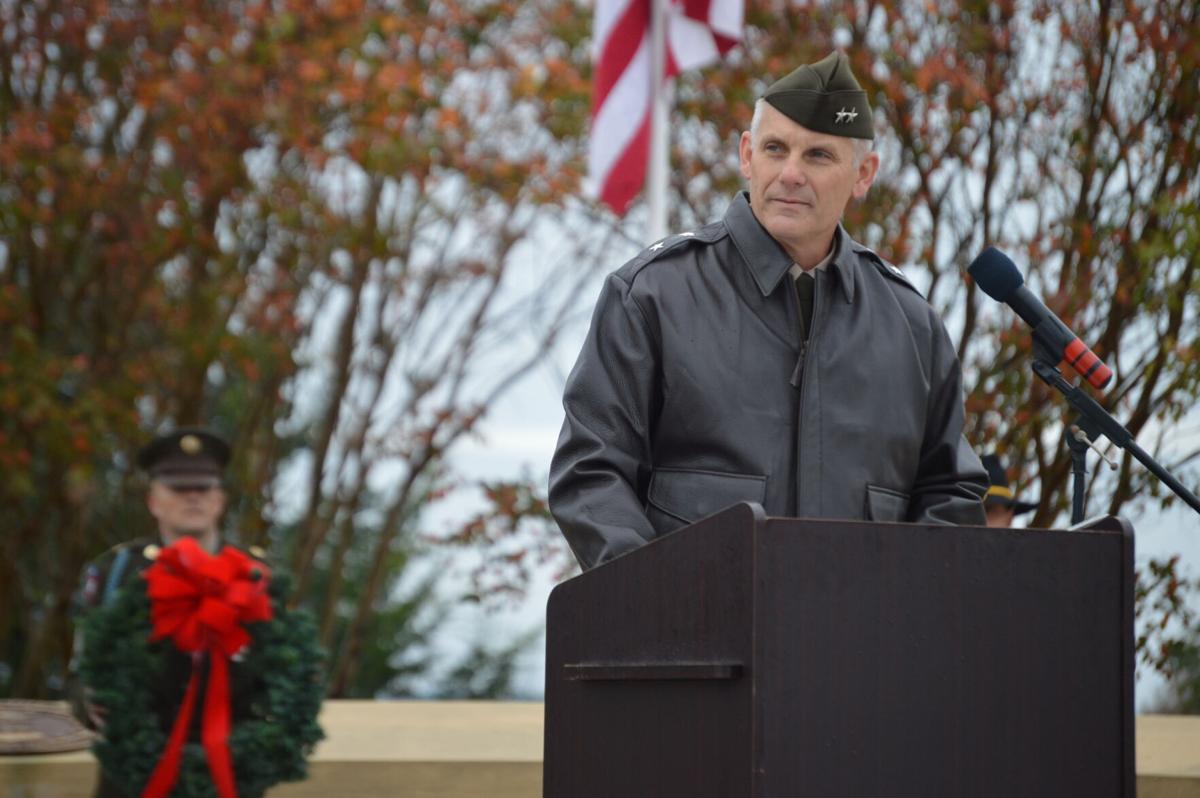 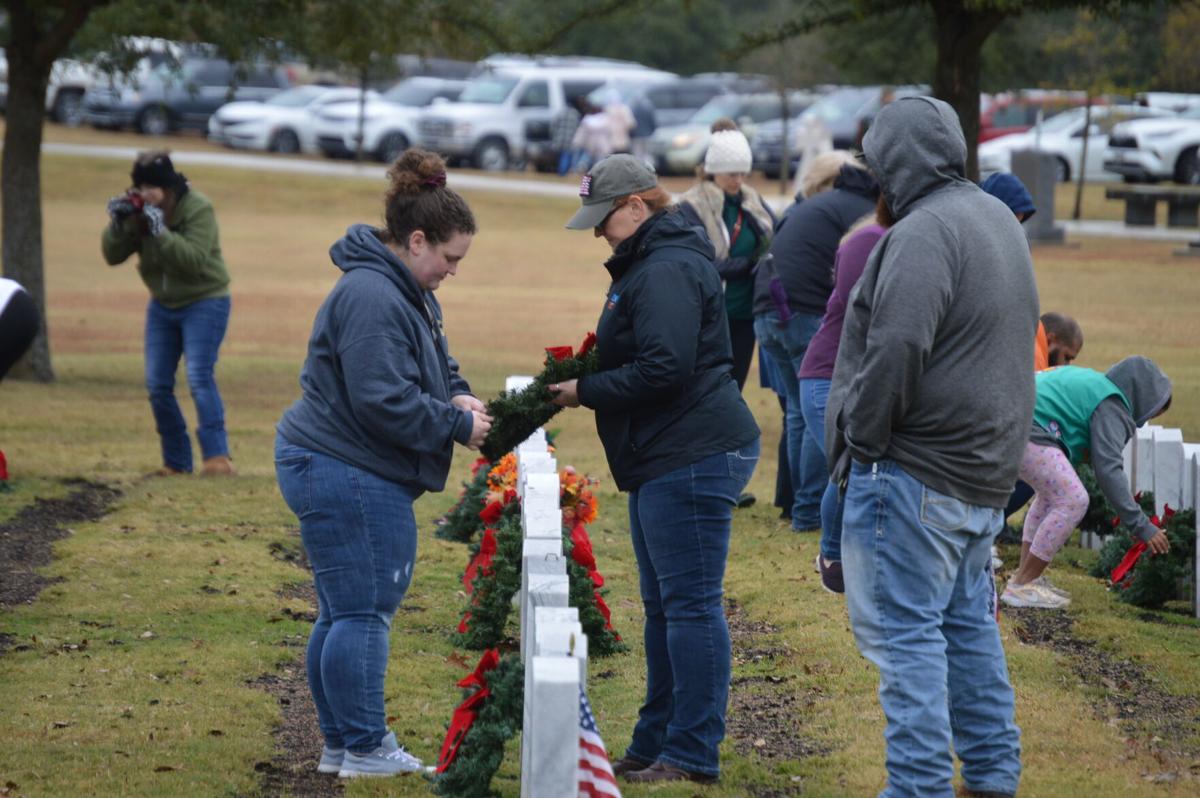 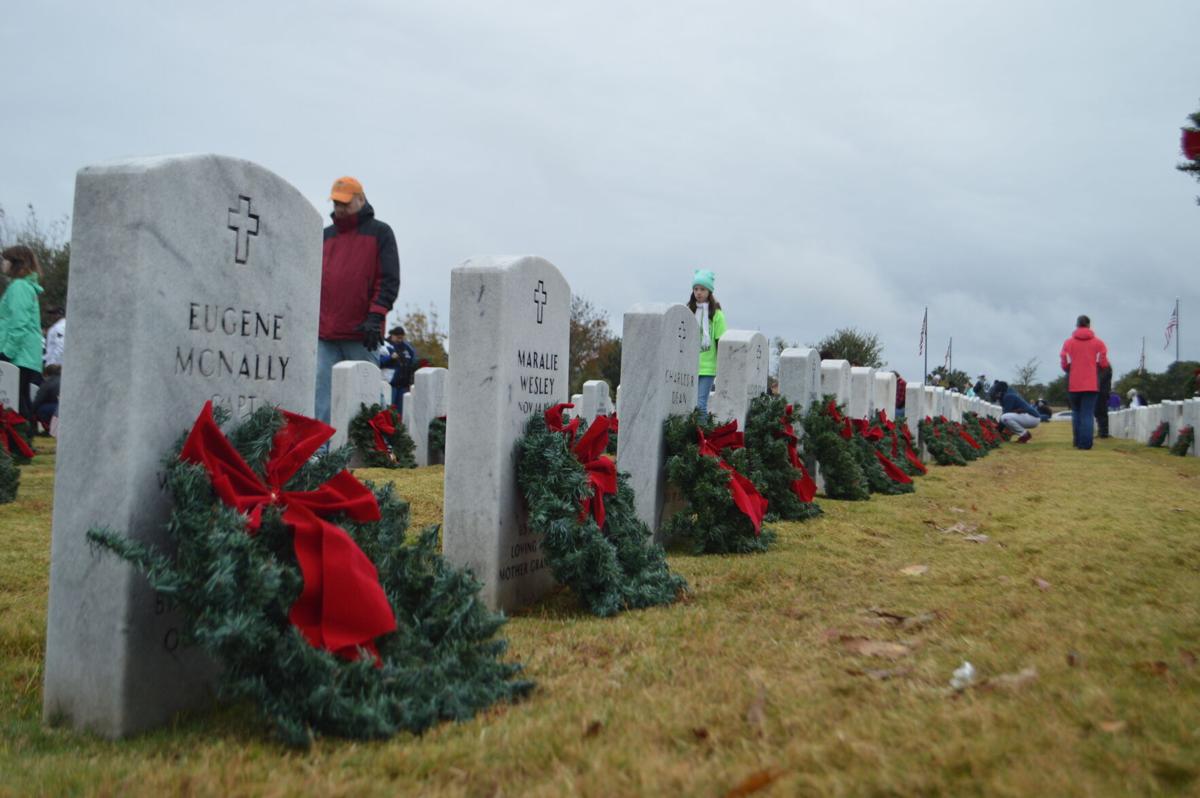 Wreaths rest against the graves of veterans and their family members on Saturday as they are anchored into the ground to endure the conditions of winter. Every year, hundreds of volunteers lay the wreaths in front of every grave. 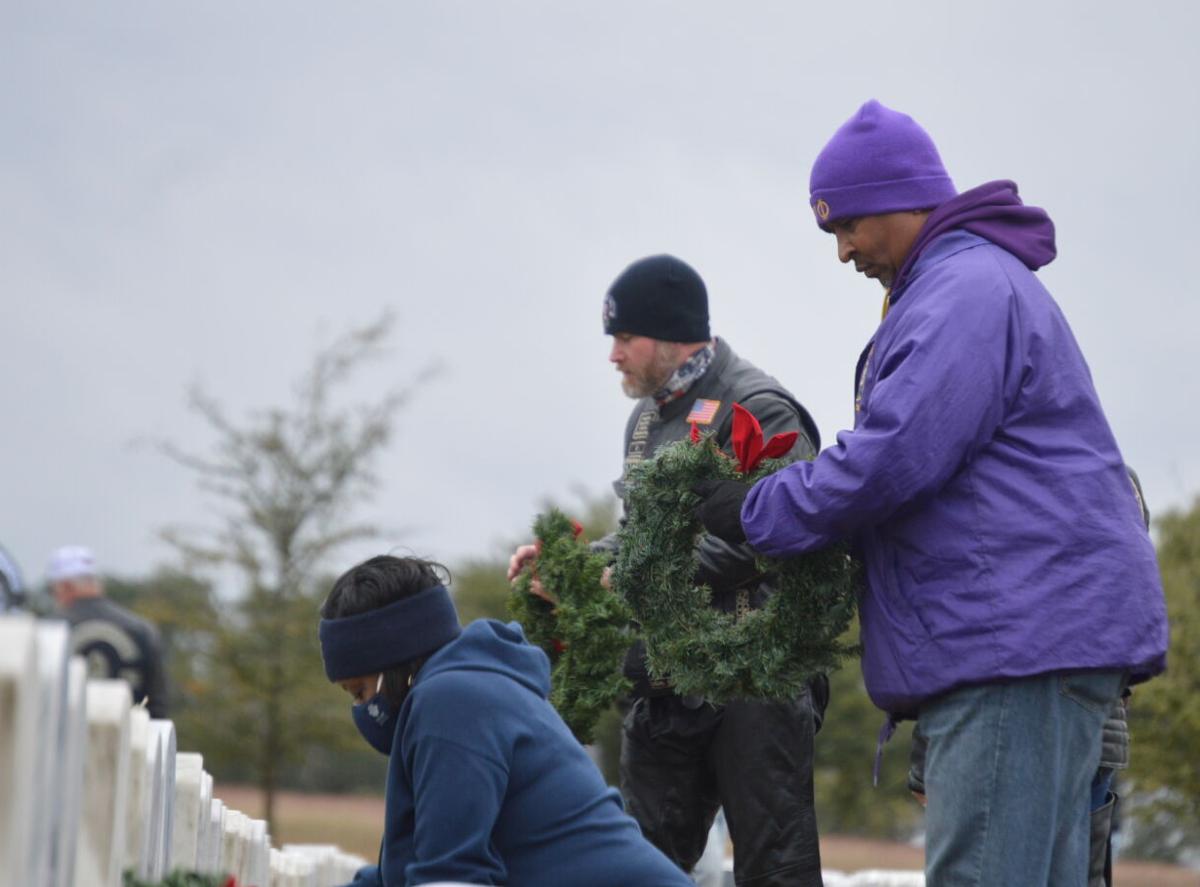 Volunteers place a wreath at the grave of veteran or family member Saturday at the Central Texas State Veterans Cemetery in Killeen.

Wreaths rest against the graves of veterans and their family members on Saturday as they are anchored into the ground to endure the conditions of winter. Every year, hundreds of volunteers lay the wreaths in front of every grave.

Volunteers place a wreath at the grave of veteran or family member Saturday at the Central Texas State Veterans Cemetery in Killeen.

The air grew still Saturday at the Central Texas State Veterans Cemetery as the rain stopped moments ahead of the annual wreath laying at the cemetery.

For some, it was a moment to lay a wreath at the grave of a loved one. For others, it is a moment to pay their respects to the veterans who have passed to symbolize that their lives and sacrifices are not forgotten.

Among those who were laying a wreath at the grave of a loved one was Killeen resident AnaLuisa Tapia, whose husband, Lorenzo Flores Carrillo Jr., passed away on Aug. 21 of this year.

“This is the first year that I ended up not necessarily being a volunteer but a family member — somebody has gone on to glory,” Tapia said, overcome with emotions and tears streaming down her face. “And just to see all the love and the dedication of this community, the loneliness kind of gets pushed to the back.”

Tapia’s husband served in the Army for 24 years and continued his service by working security at the Fort Hood gates, where he worked at the time of his death.

“To know that so many people care about our service members, and to know that his service was not in vain and his service is recognized and respected, it makes a warm moment in a cold and gray day,” Tapia said.

Temperatures hovered in the low-50s Saturday morning as hundreds gathered for the annual event.

Prior to being released to lay the wreaths, some of the volunteers congregated near the flag poles in the cemetery to listen to Maj. Gen. Steve Gilland, Fort Hood deputy commander, give a keynote address.

Gilland thanked Jean Shine, the founder of Friends of Central Texas State Veterans Cemetery (commonly known as Wreaths for Vets), for beginning the tradition of laying a wreath at every gravesite every year since 2007.

As of 2021, there are approximately 12,500 veterans and family members interred at the cemetery, Gilland explained, adding that every headstone represents a veteran.

“But the headstone signifies much more than just name and rank,” Gilland said. “In this cemetery, each stone represents a lifetime of service to our nation, going far beyond their time in uniform. It represents the support of thousands of military families, as well as the sacrifice and the grief that they, too, have endured over the years.

“It signifies freedom and the American way of life that has been defended so valiantly by these veterans as you lay your wreaths.”

Gilland and Command Sgt. Maj. Cliff Burgoyne, the top enlisted soldier at Fort Hood, laid the first wreath at the base of a fallen soldier monument.

The monument, which depicts a pair of boots, with an upright rifle and a combat helmet on the butt of the rifle, is the center of a group of other monuments that bear the names and photos of Fort Hood soldiers who have lost their lives in the line of duty during combat operations in Iraq and Afghanistan.

As Gilland, Burgoyne and an entourage of wreath-bearing soldiers made their way to the monuments, family members, including Tapia and Belton resident Michelle Cantu, began grabbing their wreaths.

Cantu rode one of the many shuttles from Texas A&M University-Central Texas to the cemetery. She was accompanied by some of her family members, including her granddaughter.

Cantu and her family have participated in the wreath laying for the past five years.

In the cemetery are Cantu’s husband, her husband’s uncle and her brother-in-law.

“It is really very special,” Cantu said. “It is a really beautiful thing to see. I mean, they serve, they’ve done their part and we just need to remember and honor them.”

She added that it is important to her to have her grandchildren come along to participate.

“You come out here and you see it and you know everybody out here has sacrificed for them to have the life they have,” she said. “That’s important that they know that their life comes at a cost. It may not be directly to them, but it does impact other people’s lives.”

The wreaths will stay in place until Jan. 8 when volunteers will be needed to pick the wreaths back up and put them in storage.

Currently, Wreaths for Vets owns two trailers, but it is in search of a third. Shine said that both are completely full, and the number and the need continues to grow every year.