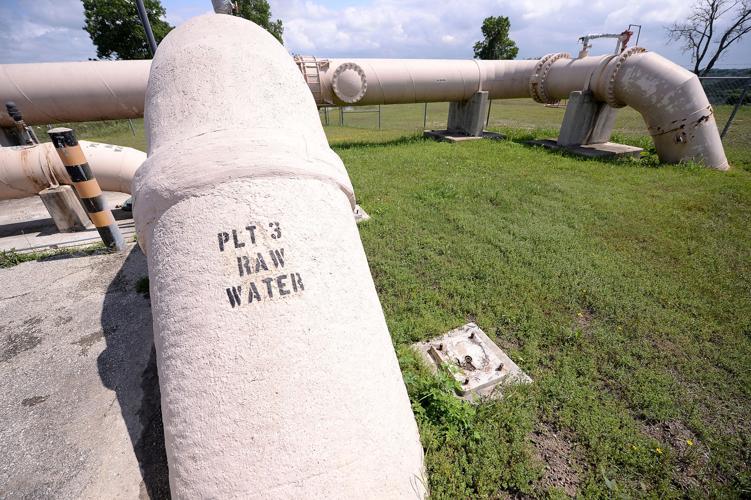 Pipes at WCID No. 1 retrieve raw water from Lake Belton and carry it to the rest of the plant for treatment. 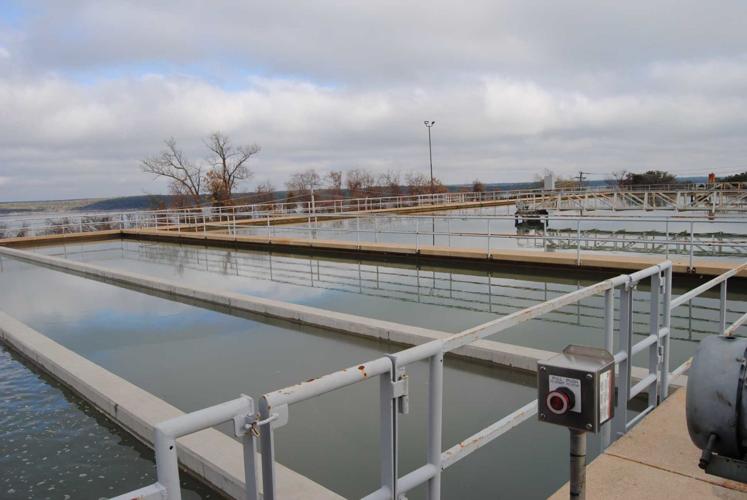 Water sits in pools prior to the filtration process at the Belton Lake water treatment plant for WCID 1. 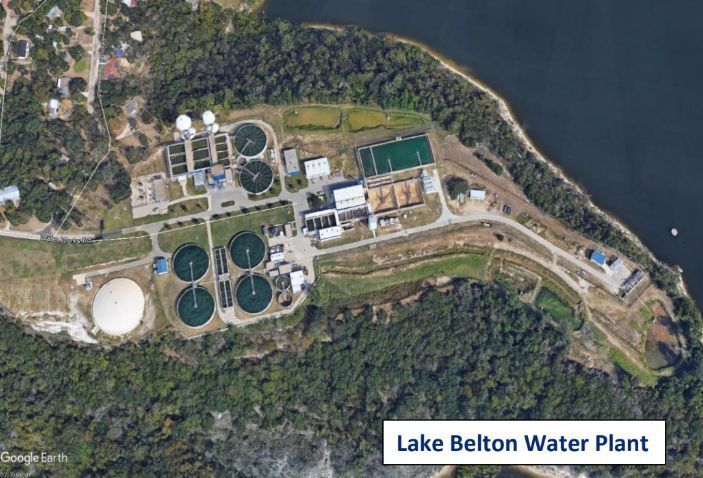 An aerial image of the Belton Lake water treatment plant was seen from Google Earth.

Pipes at WCID No. 1 retrieve raw water from Lake Belton and carry it to the rest of the plant for treatment.

Water sits in pools prior to the filtration process at the Belton Lake water treatment plant for WCID 1.

An aerial image of the Belton Lake water treatment plant was seen from Google Earth.

Killeen-area water district officials have clarified how a new multimillion-dollar backup power system would be paid for — a system that would be used if if another power outage were to occur similar to the one earlier this month, causing hundreds of thousands of people to boil their drinking water for days.

When it comes to the backup power at the Belton Water Treatment Plant, each city and entity contracted with Bell County Water Control and Improvement District No. 1 will collectively fund the just over $12 million. Ricky Garrett, the water supplier’s general manager, explained how that would work.

Bell County WCID-1’s board of directors, in a 6-0 vote Wednesday, approved a project that will provide backup power at full capacity in the event of a power outage at the plant.

During Wednesday’s meeting, Garrett said Winter Storm Uri enlightened him to the need for backup generation since the storm knocked out power to enough of the plant to compromise the amount of water it could push to the cities.

In a separate incident on May 8, the water plant lost complete power for more than three hours due to a blown fuse on a nearby Oncor power pole, which caused a boil-water notice for Killeen and other area cities that lasted days.

Garrett explained after Wednesday’s monthly board meeting that WCID-1 would issue the debt in the form of revenue bonds.

He further explained via email on Friday that Bell County WCID-1 issues the revenue bonds per the contracts it has with each entity. According to Garrett, the bonds are not backed by taxes but instead by the water rates and charges each entity assesses to its customers.

This kind of bond simplifies things, he explained.

“By having a combined debt issue, there’s only one issuance cost, rather than each entity paying their own,” Garrett said.

According to Texas Local Government Code, a contracting water district may issue warrants, notes, or bonds for the acquisition of facilities necessary or convenient for supplying water under the contract.

Before each city or entity takes on the debt, its city council or board must first approve it.

“WCID-1 cannot issue debt on behalf of a customer without their formal approval by council or board resolution and a fully executed addendum,” Garrett said.

Once approved, rather than paying a cash amount in one lump sum for its commitment of the $12 million, each city/entity would make monthly payments for the term of the debt service, which Garrett said is projected to be 20 years.

So far, it sounds probable that cities/entities would approve the addendums, according to Garrett.

An addendum is an addition to a finished document, such as a contract and can take various forms, including as an exhibit or attachment to the end of the document, according to the Cornell Law School. An addendum differs from an amendment, however, because an addendum does not modify substantial terms of the contract, the law school’s website reads.

“I’ve been in contact with everyone,” Garrett said during Wednesday’s meeting. “Everyone is aware of the ballpark numbers we’re looking at, and everyone is supportive that I’ve talked to.”

Board member John Fisher, who represents one of Killeen’s precincts, asked Garrett what would happen if a city did not participate in paying its share for the project.

Garrett responded by saying he believes they have to.

“Because it’s a requirement of Senate Bill 3, then they would be in breach of contract,” Garrett said. “We as a water utility (and) wastewater utility, we’re bound to the Texas Administrative Code and so we have to do what’s compliant.”

Garrett briefly told the board during the discussion that Fort Hood would be responsible for around $2.1 million of the project, but he did not discuss how much the other cities/entities would pay.

Prior to ultimate approval last week, planning for the project had been at a bit of a standstill for about a month. Josh Coleman, the chief operating officer of L5E Group — WCID’s consultant on the project — had been working with Atmos for certain parts of the project since in March, the board desired to pursue a natural gas-fired option.

Coleman said the talks with Atmos smoothed out recently, which allowed the project to be ready for approval at the last meeting.

“(We) had a lot of service priority questions that made us a little concerned that we were not as firm in terms of service priority as we needed to be,” Coleman told the board virtually during the meeting. “Obviously for the facility we have to have the highest gas supply priority that we can get. That’s been resolved.”

Coleman said WCID-1 would be on the commercial gas service priority, which falls only below residential priority. He told the board that commercial gas has never been interrupted by Atmos.

The scope of the project involves RPower installing 16 natural gas-fired generators that would produce a total of 10 Megawatts of power generation, which would provide full capacity for the plant.

“We’re pursuing full capacity,” Garrett said during the meeting. “The incident we had recently with the Oncor issue, when we’ve been impacted, we need full capacity.”

During last year’s 87th Legislative Session for the state of Texas, lawmakers made it a requirement for entities such as WCID-1 to have backup power. Garrett, the general manager of WCID-1, said he had been looking at backup power for the plant well before Gov. Greg Abbott signed Senate Bill 3 in June 2021.

Garrett explained via email Friday that Senate Bill 3 requires an emergency plan that assures continuous service when a power outage lasts longer than 24 hours. It is part of the reason why WCID-1 is yet to have a plan for backup power at the new Stillhouse Lake Water Treatment Plant.

“At this time the Stillhouse plant could be down without causing any loss of service because it is now supplying water to an area previously supplied through the Belton Water Plant,” Garrett said.

When the demand pushes the Stillhouse plant to produce 5 to 6 million gallons of water per day, WCID-1 will install backup power there as well. As of now, the plant pumps approximately 3 million gallons per day, Garrett told the Herald a couple weeks ago.

Coleman said the price tag is estimated to be around $12.16 million. Of that, about $10.8 million would go to the selected contractor, RPower out of The Woodlands. The remainder would be for an Atmos gas meter station and the purchase of an Oncor transformer.

Garrett confirmed Wednesday that WCID-1 will pursue a $5 million Defense Economic Adjustment Assistance Grant, but he said he is not resting on his laurels with it.

“I’m pursuing the commitments as if there was not a grant on the table at this time,” Garrett said.

Once Garrett issues a contract addendum for each entity, WCID-1 will issue the debt. If the grant is awarded, the money will go to reimbursing the entities for portions of their commitments.

The groundbreaking for the generator system could happen in about four months after addendums are issued, and the project itself could take about eight to 10 months, Garrett explained.

The backup power generation comes with another goal in mind besides being able to power the plant in the event of an emergency. Garrett explained that the generators would be run during high-demand periods, which he and WCID staff believe is not negligible.

“We think we could get somewhere between half a million to $750,000 a year of incentive by using the generators,”

Garrett answered affirmatively to board member Sandra Blankenship when she asked: “So by using that and breaking down the costs, we can hopefully pass that along to our entities?”

Blankenship further reasoned that in the long run, if WCID-1 is able to pass along rate savings to its entities, then the entities could potentially pass the savings to their customers in the form of lower water rates at the consumer level. Garrett affirmed that is a possibility.

I am from California and a few months ago I was confirmed herpes 1 virus positive and ever since then I have been doing research on how I can get rid of the virus, I was lucky to come across aba herbs. I inbox Dr Aba after scrolling through his page, the doctor responded nicely and told me that he is going to ship the cure medications to me via a shipping company, he also said I am going to get cured within two to three weeks! I never doubted him because many have said so much good news about his herbal medicine on every site and everything really went as planned.. His herbal treatments are completely legit and I recommend you contact him on dr.abaherbalhome@gmail. com or WhatsApp his number on 2348107155060

I am from California and a few months ago I was confirmed herpes 1 virus positive and ever since then I have been doing research on how I can get rid of the virus, I was lucky to come across aba herbs. I inbox Dr Aba after scrolling through his page, the doctor responded nicely and told me that he is going to ship the cure medications to me via a shipping company, he also said I am going to get cured within two to three weeks! I never doubted him because many have said so much good news about his herbal medicine on every site and everything really went as planned.. His herbal treatments are completely legit and I recommend you contact him on dr.abaherbalhome@gmail. com or WhatsApp his number on 2348107155060