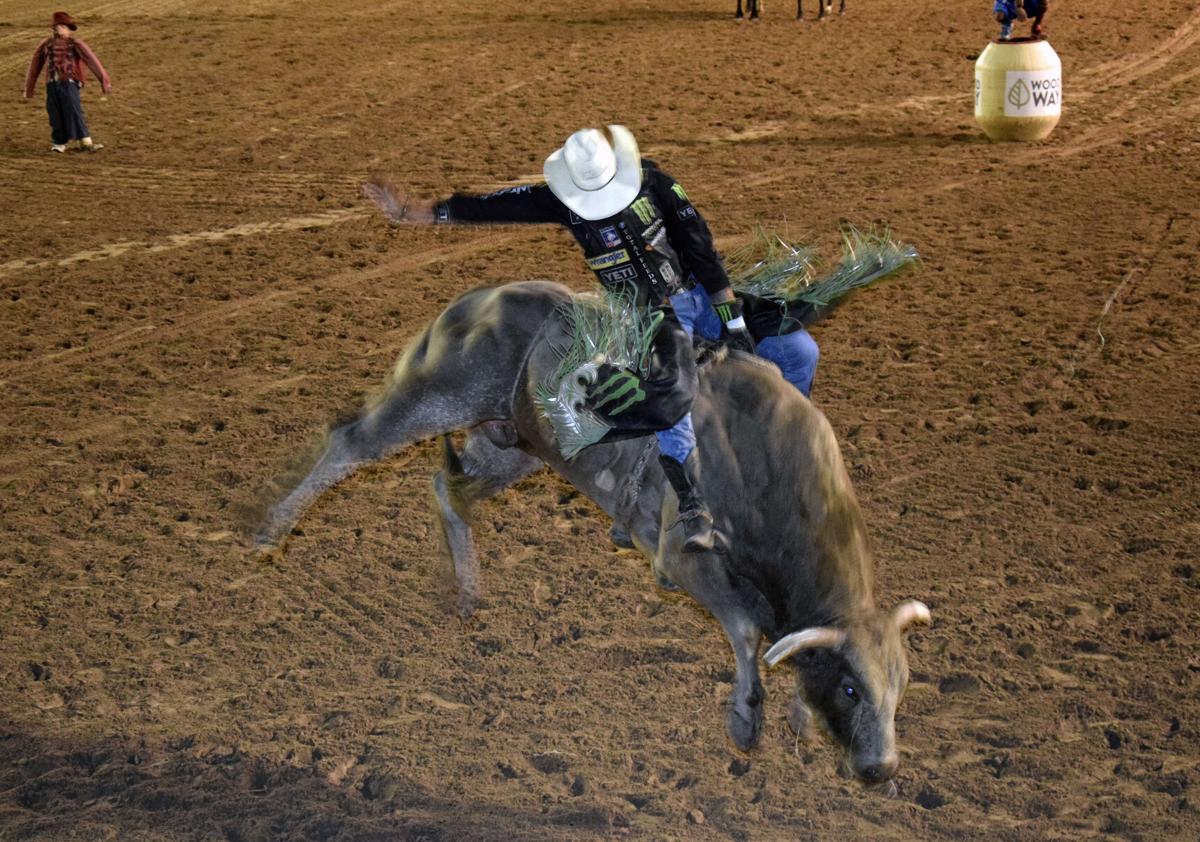 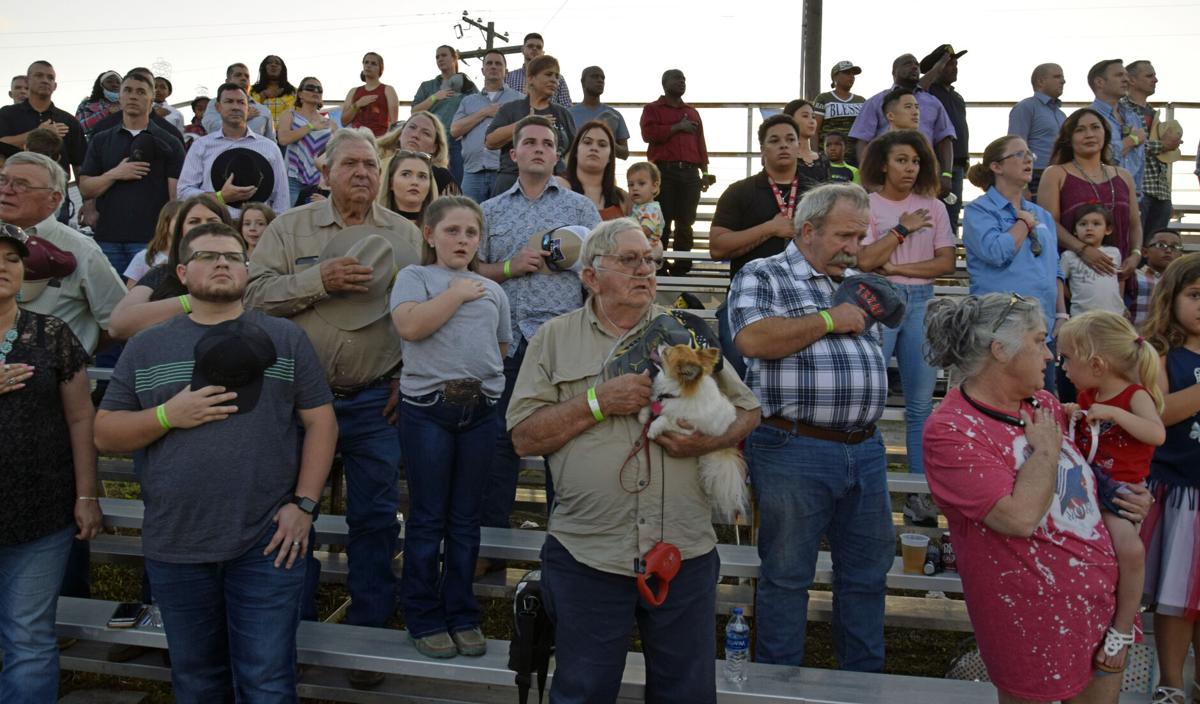 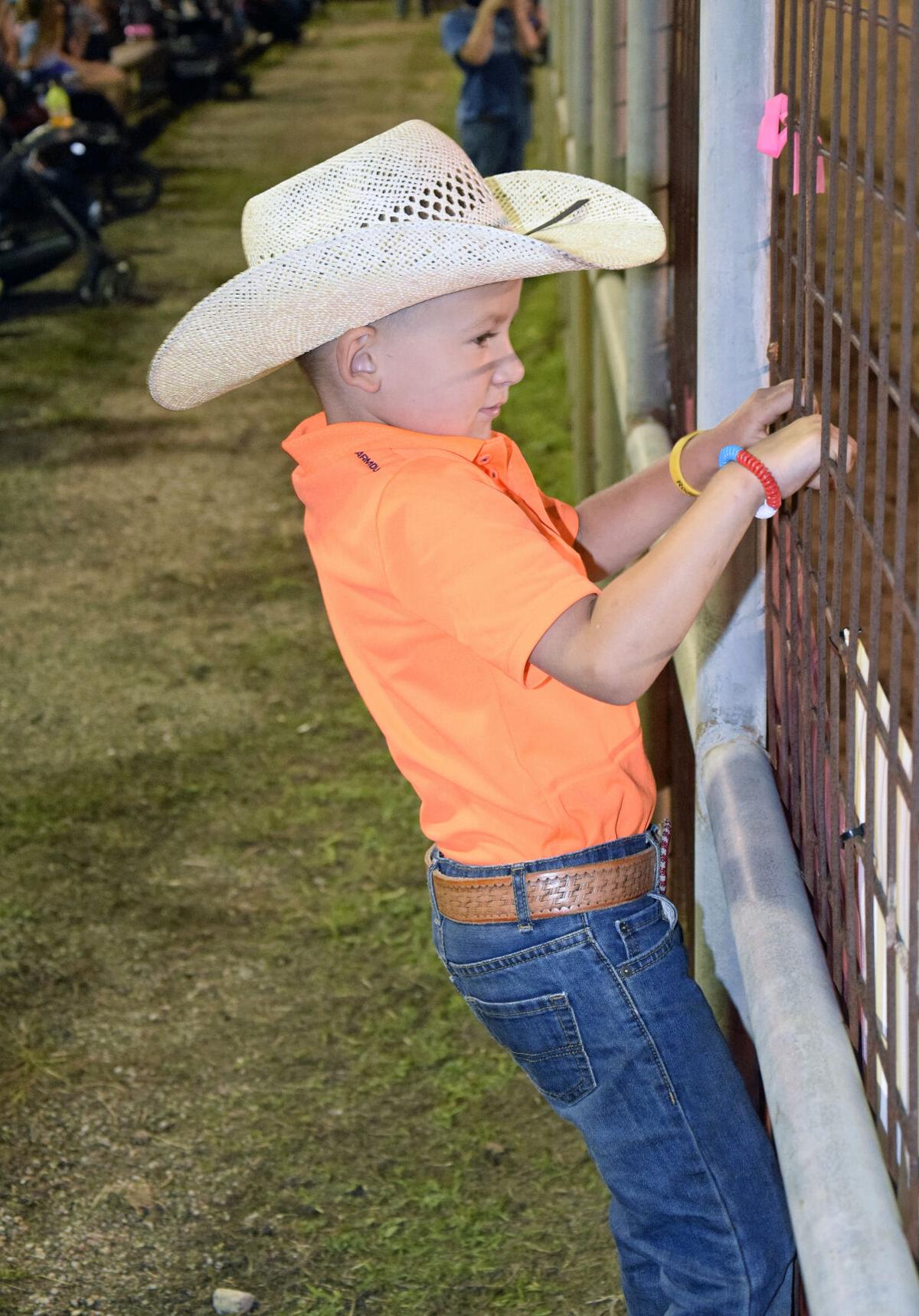 Macklynd Bohlender, 5, watches his dad inside the rodeo arena Thursday night in Killeen.

Macklynd Bohlender, 5, watches his dad inside the rodeo arena Thursday night in Killeen.

The rodeo is back in Killeen, and thousands have come out to the Killeen Rodeo Grounds, 3601 S. WS Young Drive, for a true Texas spectacle of man versus beast.

“This has been a long-standing tradition in Killeen and this year marks our 74th year of hosting a professional rodeo in Killeen,” said Joe Daggs, who sits on this year’s rodeo board in Killeen. “In the last few years we have seen many of the world’s top cowboys and cowgirls compete here, riding some of the best rough stock in the business which is provided by Sammy Andrews of the Andrews Rodeo Company.”

Six-time world champion bull rider Sage Kimzey was competing in Killeen Thursday night, and so was two-time world champion J.B. Mauney, though neither were able to stay on their bulls the 8 seconds needed for points. Bubba Greig of Byers, Kansas, topped the podium among the professional bull riders after out-muscling a stocky Andrews Rodeo bull for a total of 85 points. Each bull was a massive beast, capable of causing serious injury to riders and the brave souls tasked with protecting riders when they’re tossed to the ground.

Jimmie Smith of McDade, about 40 miles east of Austin, won the barrel racing competition with a time of 16.81 seconds. At least eight rode in the competition which saw athletic horses explode out of the shoot as their skilled riders carefully maneuvered around three barrels at break-neck speeds before a final sprint back into the shoot.

Reno Cash Stoebner of Stephenville and his partner Colton Brittain of Rockwall won the team roping competition with a time of 5.8 seconds. Nine teams competed in the competition which required two riders on horseback to work in unison to chase down and rope a small steer after it is freed from the shoot — one rope thrown around the horns, and the other rider’s rope thrown around the steer’s back legs.

John Douch of Huntsville, in East Texas, won the tie-down roping competition with a time of 8 seconds. The large field of at least 22 contestants on horseback each had to throw an accurate rope that brought the steer to the ground so contestants could dismount and tie at least three legs with a small piece of rope before the steer could get back up.

Jacob Talley of Keatchie, Louisiana, placed first in Thursday’s steer wrestling with a time of 3.6 seconds. Riders in this field had to throw an accurate rope on horseback to bring the steer to a stop, then dismount and wrestle the steer by hand to its back.

“We are standing by for first response if somebody gets hurt, as needed,” said Killeen Firefighter and EMT Jared Koppes. “We are for more severe injuries that can’t be handled by sports medicine. We are dedicated solely to the riders.”

Koppes couldn’t remember how many Killeen rodeos he has attended over the years.

“Six or seven times,” he said.

Killeen Fire Chief James Kubinski was also on hand to provide support to his team and PRCA riders. Kubinski was tapped in December as the city’s new fire chief after leaving an assistant fire chief position near Chicago.

“This is my first rodeo,” Kubinski said with a laugh amongst a group of Killeen firefighters. “Tonight’s the only night we get to say that.”

Twenty-year rodeo clown Backflip Johnny Dudley, 43, provided some family friendly humor Thursday night amongst the various pauses in all the action. He asked the large crowd how many were from other states and almost half of the packed stands raised their hands.

“It’s a military based crowd, so it’s very diverse,” Dudley said before the show. “A lot of these people it might be their first rodeo.”

The rodeo is adjacent to this year’s carnival, which boasts a range of family friendly games and rides like the large Ferris wheel and others. Tickets for the rodeo are $10 for children and $15 for adults at the gate, but folks can also bring canned goods for a free ticket.

“Bring four cans of food per person to the gate or to Freedom Country (a Killeen car dealership) to receive a free ticket per person,” Daggs said.