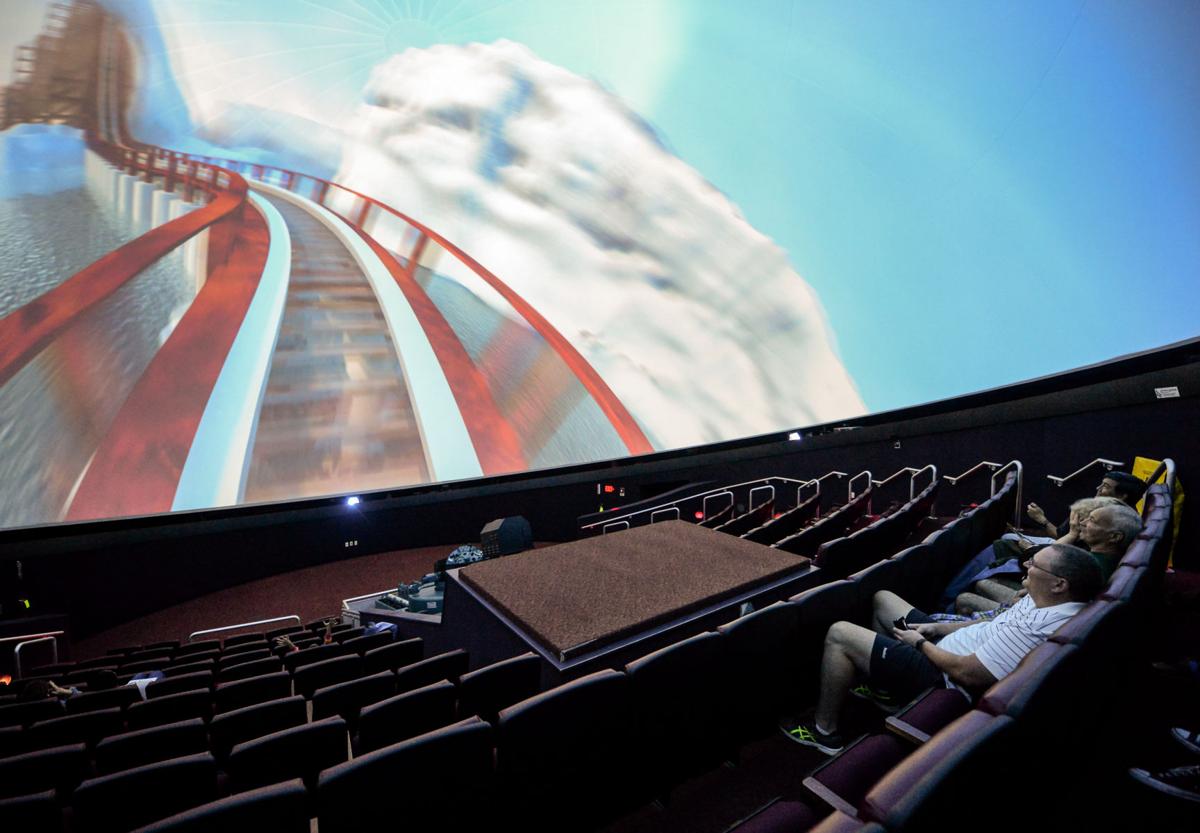 The upgraded Mayborn Science Theater on the campus of Central Texas College reopened Monday, Sept. 3, 2018, where the public watched a laser show, a documentary on the invasion of Normandy and a virtual roller coaster ride. 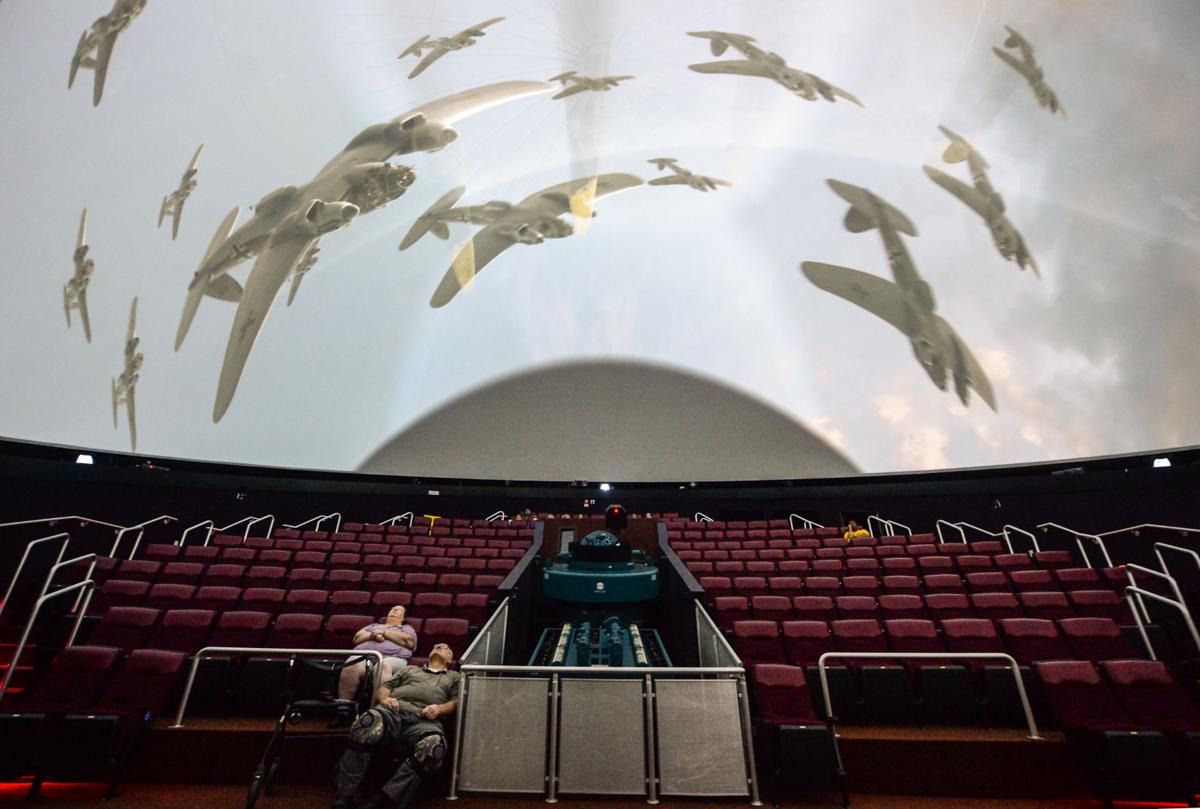 The public reclines in their chairs watching a documentary about the invasion of Normandy on Monday, Sept. 3, 2018, as the recently upgraded Mayborn Science Theater reopens for business on the campus of Central Texas College in Killeen.

The upgraded Mayborn Science Theater on the campus of Central Texas College reopened Monday, Sept. 3, 2018, where the public watched a laser show, a documentary on the invasion of Normandy and a virtual roller coaster ride.

The public reclines in their chairs watching a documentary about the invasion of Normandy on Monday, Sept. 3, 2018, as the recently upgraded Mayborn Science Theater reopens for business on the campus of Central Texas College in Killeen.

The Mayborn Science Theater, located on the campus of Central Texas College, announced it will premiere a new show in this month.

The new show schedule opens at 11 a.m. Saturday with “One World, One Sky: Big Bird’s Adventure.” A brilliant spectacle of light and color, the show aims to nurture a child’s natural sense of wonder about the night sky. It follows “Sesame Street’s” Big Bird and Elmo as they explore the night sky and take an imaginary trip from Sesame Street to the moon where they discover how different it is from Earth.

At noon is a doubleheader with “Legends of the Night Sky: Orion” and “Legends of the Night Sky: Perseus and Andromeda.” The “Orion” story takes a lighthearted and imaginative look at the myths and stories associated with one of the night sky’s most famous constellations, Orion, the great hunter of the winter sky. Follow Orion as he grows to manhood, battles mythical beasts, foils the plot of an evil king and wins the heart of Artemis, the beautiful moon-goddess. By the end of the story, we learn how the constellation Orion was placed in the sky, forever turning overhead throughout the seasons. Then “Perseus and Andromeda” is filled with humorous and exciting characters including Perseus the mighty warrior, Pegasus the winged horse, Cetus the sea monster and the fearsome monster Medusa. The entertaining tale is designed to engage young students and stimulate their interest in learning about the night sky.

“Flying Monsters” is at 1 p.m. It takes the audience on a journey with world-renowned naturalist and documentary filmmaker David Attenborough who recounts the fascinating story of how we first discovered dinosaurs were real and how they were even able to get off the ground and rule the prehistoric skies.

“We Are Astronomers” allow viewers to participate in an international quest to uncover the secrets of far off galaxies. The audience will learn to decipher the code of starlight, chart changes and challenges in stargazing since time began and be immersed in the world of exotic galaxies and endless possibilities. The show also reveals the global collaboration, technology and dedication required to answer the unresolved questions of the universe. Show time is 2 p.m.

At 3 p.m. is “Astronaut” which takes the audience inside the making of an astronaut and how to become a part of the incredible journey of space travel. Viewers will experience a rocket launch from inside the body of an astronaut, explore the amazing worlds of both inner and outer space, float around the International Space Station, maneuver through microscopic regions of the human body and learn about the perils that lurk in space.

At 4 p.m. is the premier of “The Hot and Energetic Universe.” The show uses immersive visualizations and real images to highlight the natural phenomena related to the high-energy astrophysics. This science probes hot gas in clusters of galaxies, which are the most massive objects in the universe. It also probes hot gas accreting around supermassive black holes in the centers of galaxies and provides important information about our own galaxy, neutron stars, supernova remnants and stars like the sun. It also includes advancements of modern astronomy, the most advanced terrestrial and orbital observatories and the basic principles of electromagnetic radiation.

The evening shows begin at 7 p.m. with “Pandas: The Journey Home.” Presented by National Geographic, the show gives the audience unprecedented access to meet all of the pandas at the Wolong Panda Center in China as they get ready for their new lives in various parts of the world. The audience will see these cute, lovable creatures as never before and learn about their fascinating habits and personalities.

At 8 p.m. is “Tales of the Maya Skies” which immerses the audience in the science, art and mythology of the Mayan culture. The show takes viewers to the ancient jungles of Mexico, where the Maya built cities and temples aligned to movements of the sun, moon and planets. The show weaves together this rich combination of science, culture and legend and revisits the sounds and sights of an ancient way of life.

At 9 p.m. is the laser light show “Laser Metallica” which highlights some of this heavy metal band’s greatest hits including “Enter Sandman,” “Fuel,” “Unforgiven,” Nothing Else Matters” and others from the album “Master of Puppets.”

The Mayborn Science Theater will offer weekday matinees on Wednesdays at 3:30 p.m. and be open March 12-14 during spring break with matinee doubleheaders at 1:30 and 2:30 p.m. each day. Classic Movie Friday is March 15 and opens at 5:30 p.m. with Disney’s “Beauty and the Beast” followed at 7:30 p.m. with Steven Spielberg’s “Raiders of the Lost Ark.”

Laser Friday is March 29 featuring three music laser light shows. At 7 p.m. is “Laser Pop” which offers a mix of popular hits. At 8 p.m. is “Laser Guitar Hero” which includes some of the most popular selections from the video game. And at 9 p.m. is “Laser Green Day” featuring many of the band’s biggest hits. Then take a tour of the constellations and stars visible in the night sky with Warren’s Star Tour on Saturday, March 30 at 7 p.m.