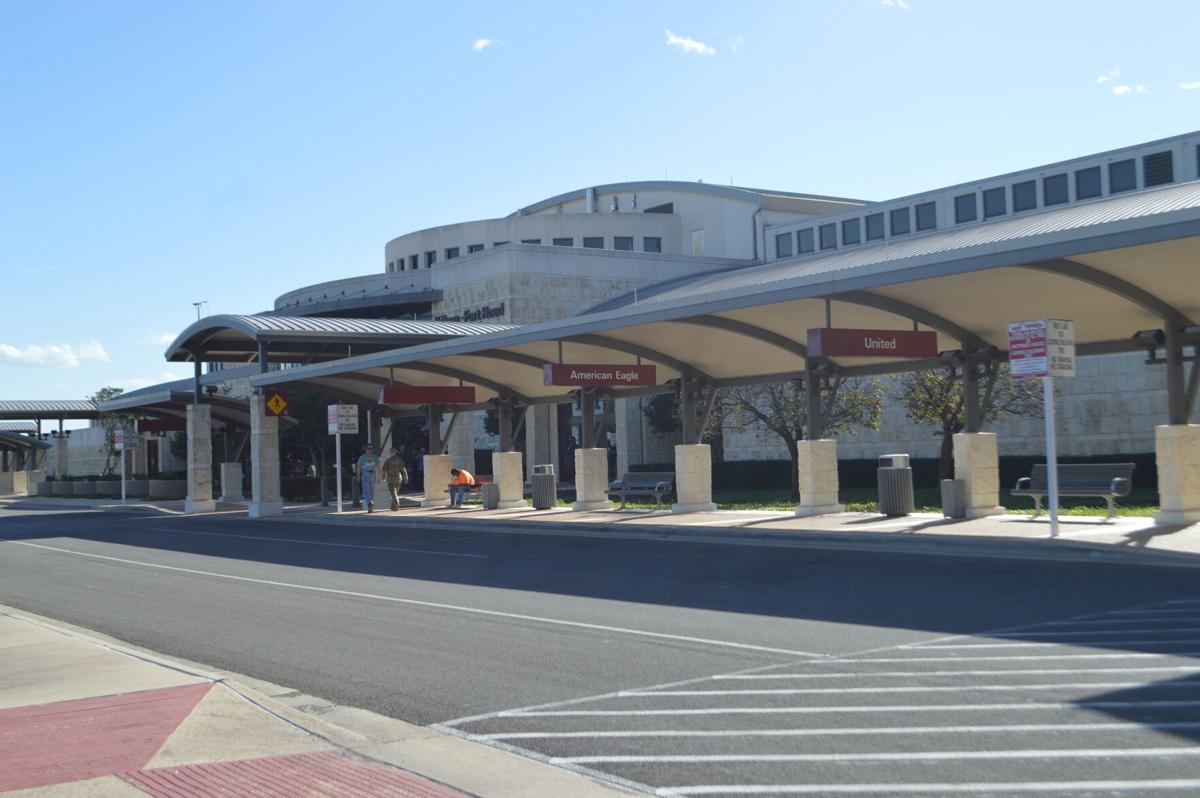 The Killeen Regional Airport is Killeen's answer to the Austin International Airport. With perserverance and a little luck, officials hope to one day offer a more routes and additional services to become the premier regional air service provider. 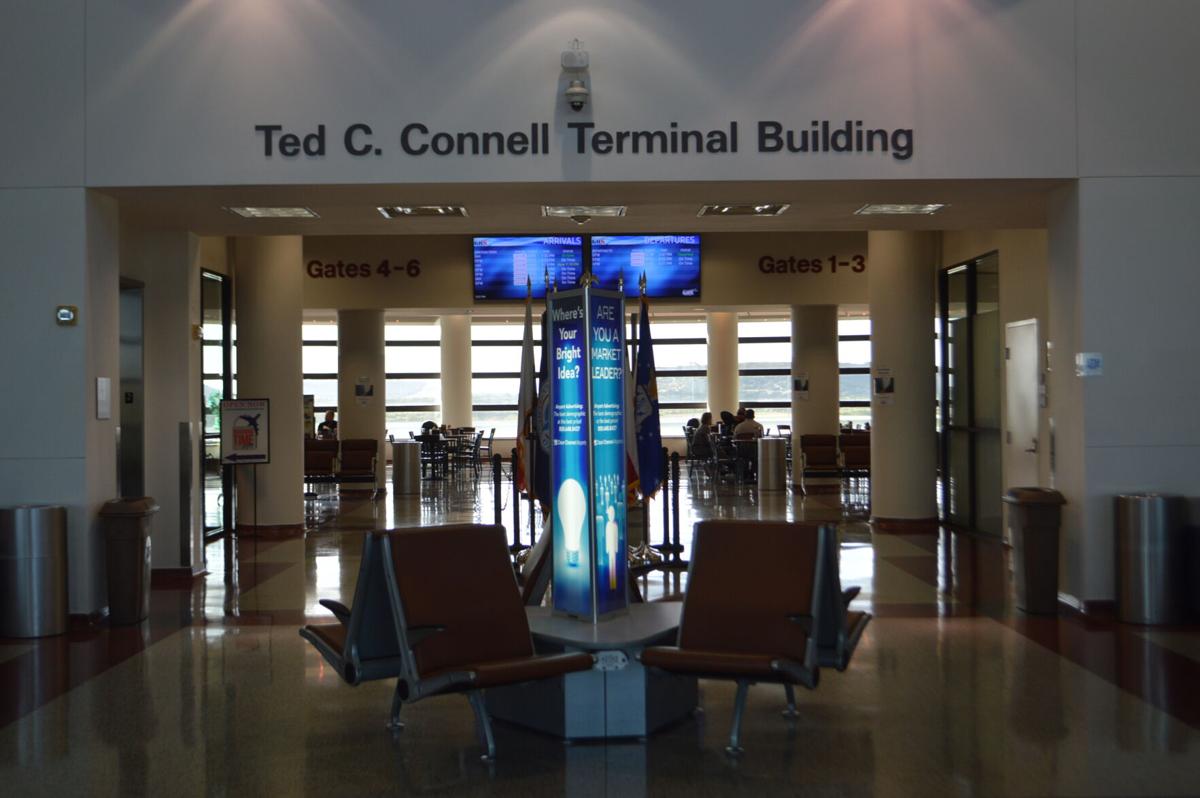 The Killeen-Fort Hood regional airport is struggling to overcome challenges set by its largest competitor, Austin 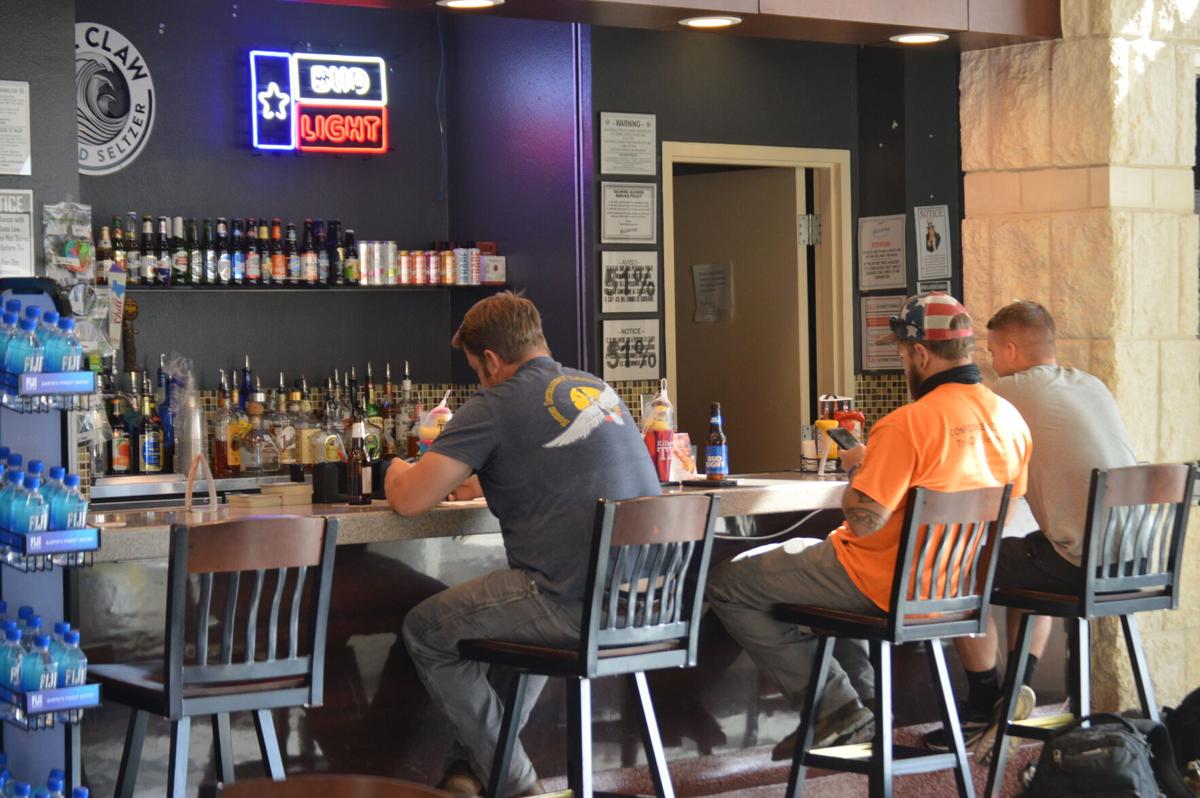 Passengers relax at Tailwind's bar at the Killeen Regional Airport before moving to a holding area. Tailwinds was contracted last year to replace the previous aircraft-themed subway. Officials said that Tailwinds, who now provides food, drink, and gift shop services is a more flexible option.

The Killeen Regional Airport recently completed installation of its new baggage handling system. The previous system lasted for 17 years before being replaced by its newer, more efficient counterpart. 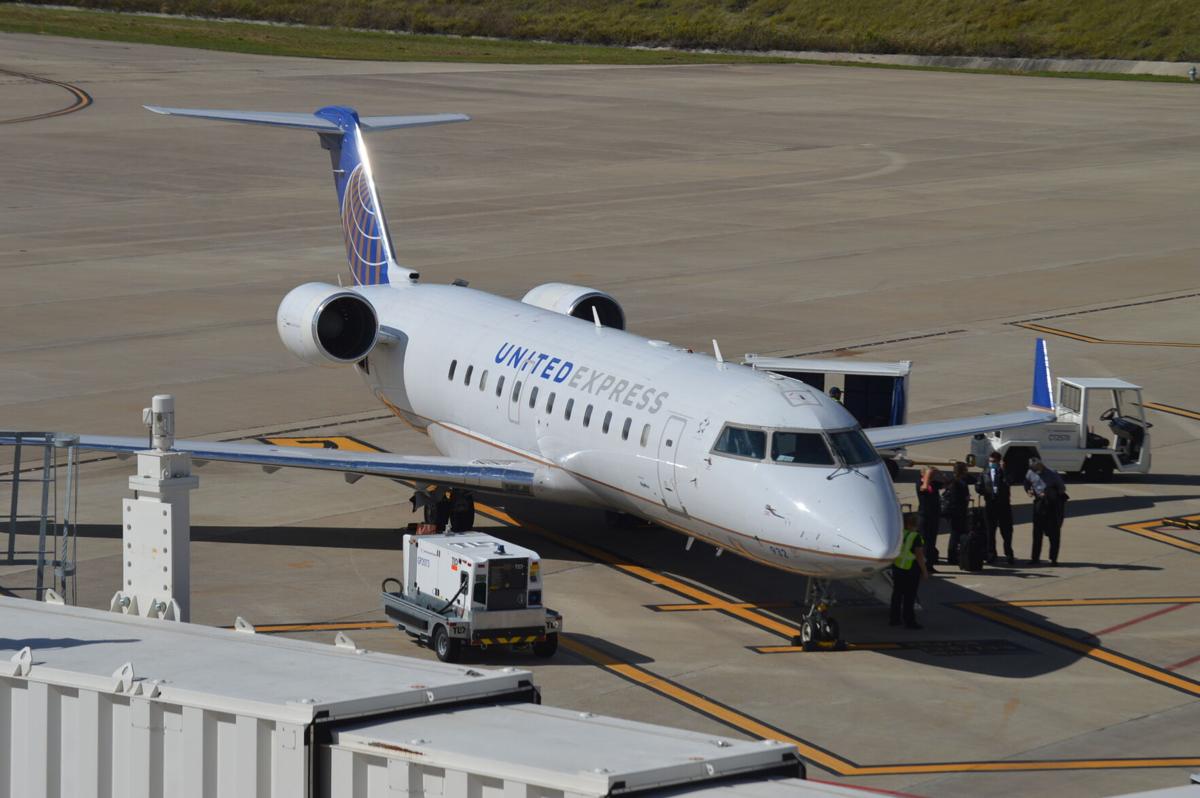 United Airlines is one of two major air service providers at the Killeen Regional Airport.

The Killeen Regional Airport is Killeen's answer to the Austin International Airport. With perserverance and a little luck, officials hope to one day offer a more routes and additional services to become the premier regional air service provider.

The Killeen-Fort Hood regional airport is struggling to overcome challenges set by its largest competitor, Austin

Passengers relax at Tailwind's bar at the Killeen Regional Airport before moving to a holding area. Tailwinds was contracted last year to replace the previous aircraft-themed subway. Officials said that Tailwinds, who now provides food, drink, and gift shop services is a more flexible option.

The Killeen Regional Airport recently completed installation of its new baggage handling system. The previous system lasted for 17 years before being replaced by its newer, more efficient counterpart.

United Airlines is one of two major air service providers at the Killeen Regional Airport.

Every day, 3,600 passengers check into a Central Texas airport.

Wading through TSA lines, each of these flyers sets out to Dallas, Killeen, Austin or Houston.

Unfortunately, fewer than 9% of these potential customers fly out from the Killeen-Fort Hood Regional Airport. But why?

In the 17 years since its inception, the Killeen regional airport has grown to be a staple in regional military transportation thanks to its partnership with the Robert Gray Army Airfield. During the height of the post-911 conflict in southwest Asia, the regional airport experienced averages of 385,000 passengers per year, up to a high of over 400,000 in 2010.

But every flight has a decent.

2011 saw the death of Osama Bin Laden, and with it came former President Barack Obama’s deliverance of a promise to reduce U.S. presence in the Middle East. With that withdrawal, however, came lower military demand, and subsequently lower ridership.

In 2015, the airport’s passenger numbers had dropped to 289,000, and the airport’s worst pre-pandemic year was 2017, when it filled just 260,000 seats. That same year, Delta Airlines announced it would pull out of the Killeen airport, removing the Atlanta route and leaving just American Airlines and United Airlines to service flights to Dallas and Houston.

And just three days ago, United Airlines announced its own decision to exit the airport, effective Jan. 4. The resulting shortfall will come in the way of three daily flights, approximately 100 daily seats, and the loss of connecting and one-way flights to and from Houston.

The move, while unfortunate, was not unexpected.

“Due to changes in the long-term sustainability of this route, United will end service to Killeen at the start of the new year. We will work with impacted customers to help them make alternate plans,” Charles Hobart said, speaking for United Airlines.

Hobart said the primary reason for United Airline’s decision was the result of pandemic-related losses.

Last year, the airline industry as a whole suffered massive setbacks in the way of safety concerns, the recall of Boeing’s 737’s, and the COVID-19 pandemic, which shuttered the entire world and resulted in massive staffing issues for the sector.

In 2020, the Killeen-Fort Hood Regional Airport serviced just over 163,000 passengers. And in April, the airport saw fewer than 3,000 flyers.

“It was a dark time,” said Mike Wilson, Killeen’s executive director of aviation.

Wilson, who started in Killeen last May, was given the herculean task of wresting the airport back from its primary competitor, Austin, and bolstering ridership numbers.

For the most part, the 41-year veteran of the flight industry has succeeded in this endeavor, with ridership numbers presenting higher than pre-pandemic levels as of March.

Much of this current success may be due to an influx of state and federal funding, with the airport receiving many millions of dollars in grants.

To the excitement of Killeen’s flying community, the airport was announced this year to be the recipient of a $1 million grant from the Small Community Air Service Development Program (SCASDP), which carried with it $200,000 from the Killeen Economic Development Committee and $10,000 from AdventHealth.

While a majority of these grants are based largely on enplanements, or how many people take off from the Killeen airport, the SCASDP is a highly selective grant that was awarded to only one regional airports in Texas — out of 77 national applicants.

With six gates, relatively short lines, a new baggage system, sleek appearance, and even a gift shop, which may be the only place one can buy Killeen merchandise, there is an unmistakable focus on community service.

“One of the biggest annoyances that people face is that airports are cashless. So they get here and they get past the gate and all of a sudden they realize they need something to eat,” Jared Provost, operations manager for the airport, said. “We were at a stakeholders meeting and Tailwinds thought of this idea of loadable cards for the vending machines.”

Provost also mentioned the airport’s 300-plus cameras, its commitment to safety and security, and the introduction of a post-check-in cash register.

“Those small things make a world of difference to the community,” he said.

Despite all of these improvements, there are many who see the Killeen-Fort Hood Regional Airport as ersatz compared to the Austin-Bergstrom International Airport.

According to Wilson, as many as 73% of regional residents prefer to drive to Austin rather than fly Killeen, with their largest complaint to date being that the airport simply does not provide enough options.

Unfortunately, the airport’s meager route options is an issue that has so far remained ineludible.

The problem, according to Wilson, is that air service routes and their prices are set by airlines, not the airport.

“I’m just a landlord,” Wilson said. “I provide land where they can do their business.”

The problem is that business goes where it has customers, and airports can no more will into existence a flight to Atlanta than the city can a grocery store.

The primary issue is that regional airports face a paradoxical relationship with airlines. In order to secure more routes, airlines want to see heightened travel numbers and increased demand. However, this need is difficult to demonstrate with so few options for travelers.

“The best way to keep airlines from leaving and to encourage others to begin new service, is for the folks in our region to use our airport and to fly the airlines we have,” Wilson said.

Additionally, a serious issue for local flyers is pricing. While United Airlines provided relatively low-cost flights from Killeen to Houston, charging as little as $60 for a two-week-out one-way ticket, American Airlines rests at the top of what Wilson described as the “pricing pyramid.”

Preferably, an airport would include airlines with multiple “pricing schemes.” For example, while American Airlines asks for a comparably hefty price, Southwest Airlines is fairly cheap. Without competition from other airlines, however, pricing schemes remain locked, and many customers decide that the 60-minute drive to Austin is well worth the difference in price.

For now, Wilson and his team will continue to develop the airport. A new coporate hangar is projected for completion near the new year, which, when completed, will be filled by CSI, an emergency air service provider. CSI is expected to bring in at least 42 new jobs.

The airport will also soon begin construction on another corporate hangar, to be completed next summer.

And of course, the airport will continue to develop its marketing program, seeking to attract more regional customers from Georgetown, Lampasas, Killeen and just about every other local town.

In regards to whether they will fill the gap created by United’s departure, American Airlines has given Wilson a firm ‘maybe.’

“We have spoken to American about additional capacity in light of United Airlines leaving, and they indicated that if additional demand is there, they will attempt to meet the demand,” Wilson said.

Until then, the city of Killeen has, and will continue, to encourage ridership out of the Killeen regional airport.

At one time the airport had a long-range plan in the surrounding acreage for a leading brand hotel and gas stations. What ever happened to this plan?

I appreciate the airport for it's convenience as an early morning drive through unpredictable traffic to Austin or Waco is not worth the amount of money I'll save.

Reducing short-term parking rates is nice, but not a way to encourage flyers. Maintaining at least one good quick meal food source with a wide range of hours important. Vending machines don't cut it.

Fun Jet flights to Las Vegas were available at one time. Could these be available on long-weekends with the inclusion of free parking?

Find out what it takes to get small airlines like Jet Blue and Spirit to schedule weekend flights out of Killeen.

To encourage the use of long-term parking provide a limited number of covered spaces to protect vehicles from hail and sun.

While smaller eighty-seat aircraft maybe cost saving for the carriers, I despise the cramped seating and luggage storage. Encourage American and other potential small carriers to use medium size aircraft that don't make the flyer feel so cramped.