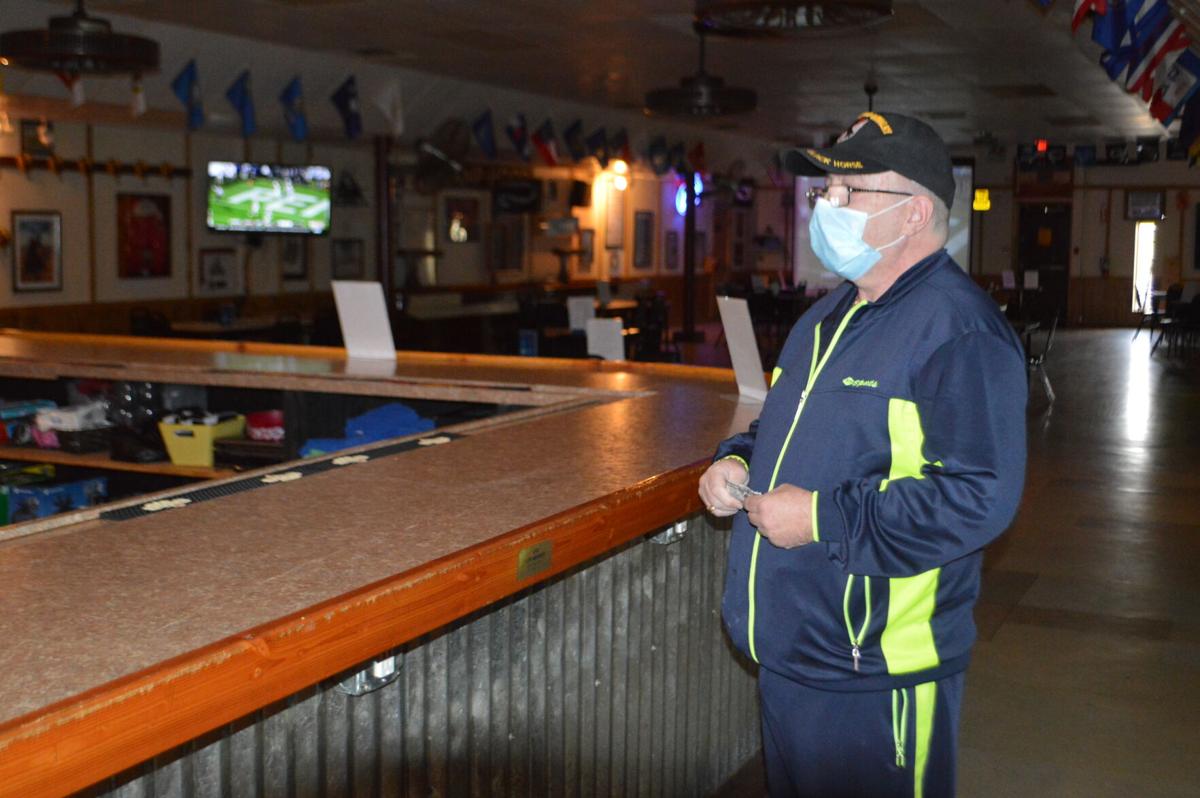 VFW member John Rodgers has cash in hand as he prepares to order a drink and bag of chips from VFW Post 3892 in Harker Heights. The VFW re-opened Oct. 3. 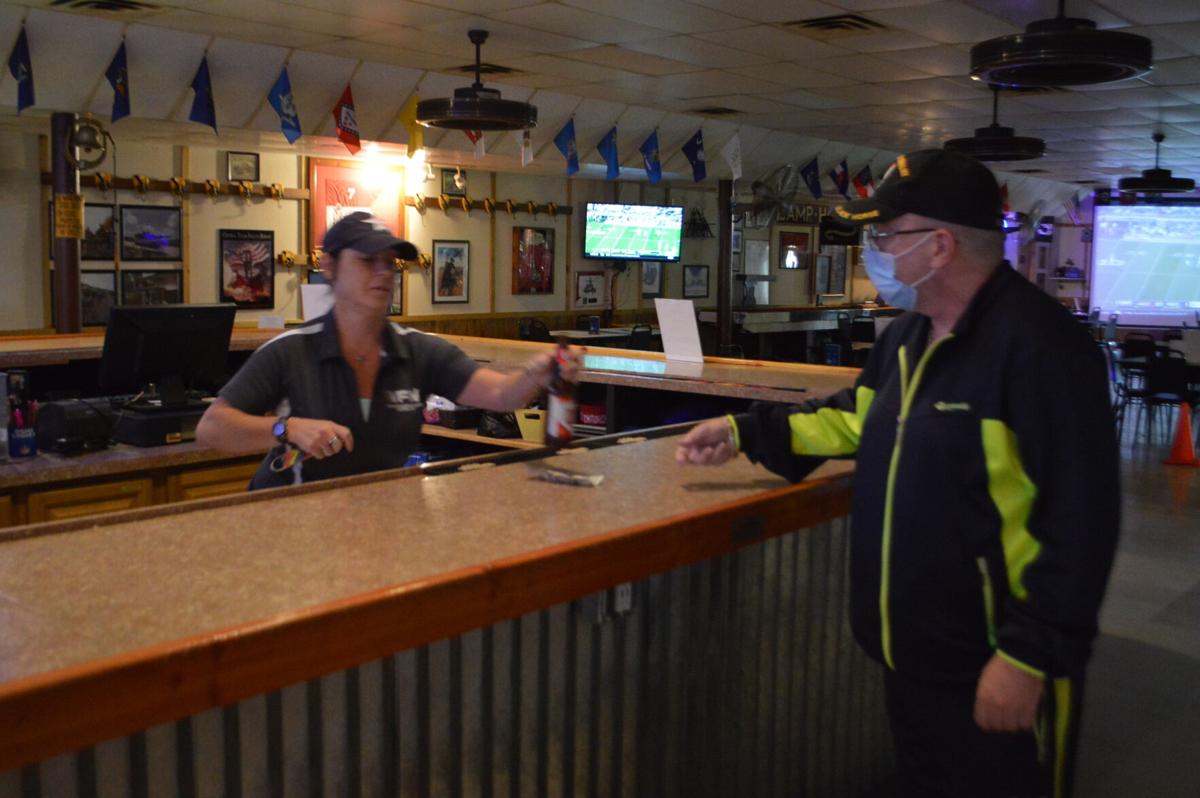 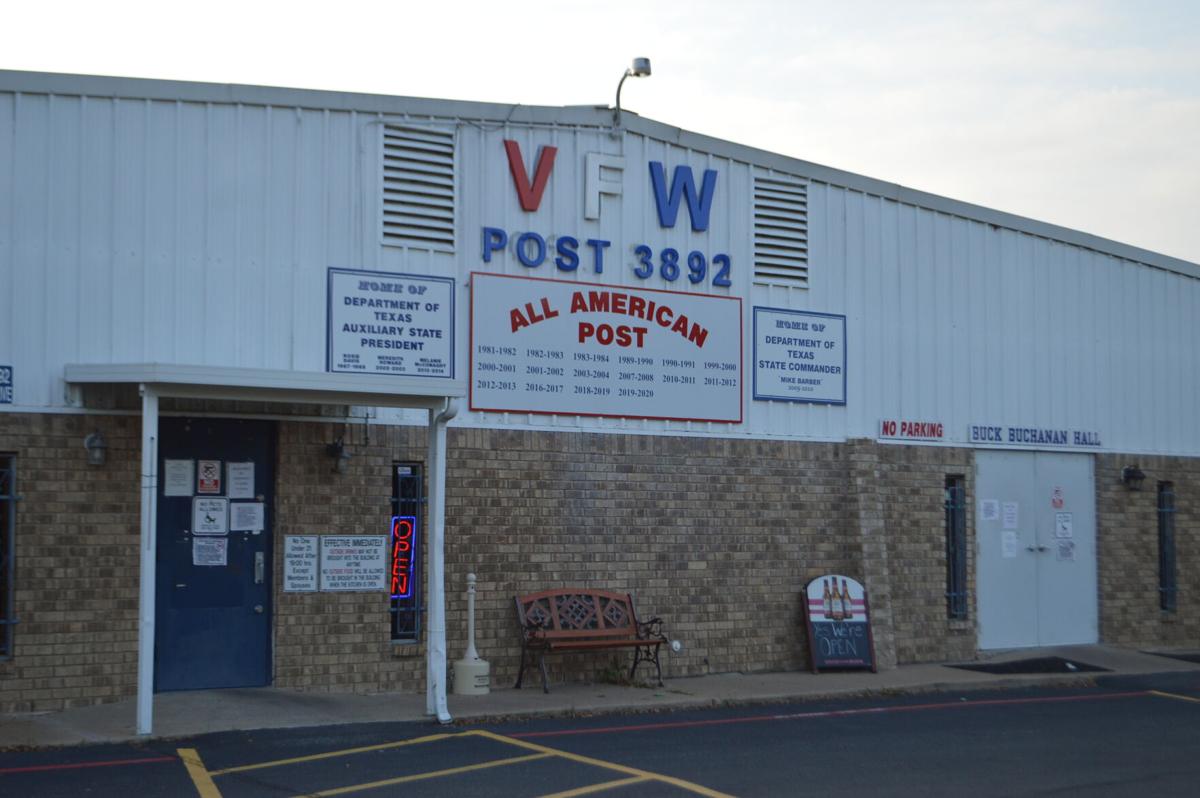 VFW Post 3892 in Harker Heights re-opened for business on Oct. 3. The post commander said business has been slow, but re-classifying as a "restaurant" should help it stay open in the event of another shutdown by Gov. Greg Abbott. 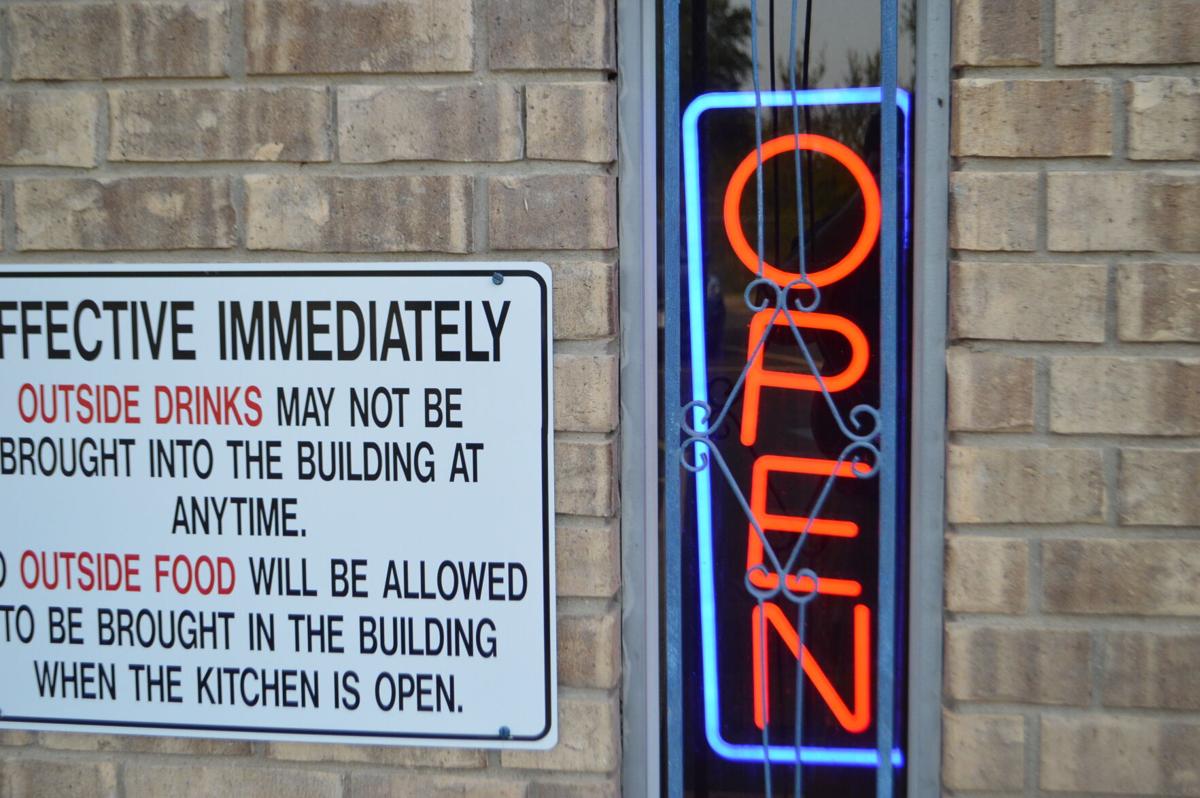 An "open" sign is illuminated at the VFW Post 3892 in Harker Heights. The post recently re-opened after being shut down due to Gov. Greg Abbott's decision to close down bars.

VFW member John Rodgers has cash in hand as he prepares to order a drink and bag of chips from VFW Post 3892 in Harker Heights. The VFW re-opened Oct. 3.

VFW Post 3892 in Harker Heights re-opened for business on Oct. 3. The post commander said business has been slow, but re-classifying as a "restaurant" should help it stay open in the event of another shutdown by Gov. Greg Abbott.

An "open" sign is illuminated at the VFW Post 3892 in Harker Heights. The post recently re-opened after being shut down due to Gov. Greg Abbott's decision to close down bars.

When Veterans of Foreign Wars posts were told they had to close down in the spring because of Gov. Greg Abbott’s decision to close bars, the closures affected not only veterans, but also the canteen workers.

One of those workers was Chasity Love, canteen manager for VFW Post 3892 in Harker Heights.

Love has been with the canteen since June 2019 and was promoted to canteen manager in April.

She said she found out March 18 that she was going to be furloughed, and the VFW was going to be unable to pay her. After months of volunteering and personal sacrifice, the lack of income hit a boiling point a few days ago.

Facing an eviction this past Friday, the members of the post stepped in to donate enough money to cover Love’s delinquent fees with her landlord Thursday afternoon.

“I was not expecting that at all,” Love said, wiping tears from her eyes. “And I feel very grateful and very blessed.”

Love said she described her attitude as “struggle in silence,” since she would rather see her employees taken care of before herself.

The members also raised enough money among themselves to prevent another canteen employee’s lights from being disconnected.

Willie Keller, VFW Post 3892 commander, said Love’s selfless service is similar to that of veterans who belong to the post.

Keller said his post re-opened on Oct. 3. When Abbott’s decision to close bars again was announced on June 26, it left the door open for establishments to re-classify with the Texas Alcoholic Beverage Commission.

Bar owners who wanted to were given the opportunity to re-classify with TABC as “restaurants.”

Keller said members of his post voted to allow him to go that direction, and the post obtained its reclassification for a food and beverage identifier not long before Abbott announced that bars could re-open to 50% capacity, along with other restrictions, so long as counties opted in.

Re-classifying cost Post 3892 extra money that primarily came out of the pockets of members — $776 for re-classification and more than $2,000 to do upgrades to the building — Keller said.

Although his post is able to be open, and should be able to remain open if bars are forced to close again, Keller said he is taking things step by step.

“Me, as the commander, I’m looking at what’s next,” Keller said in a phone interview Tuesday. “If the (coronavirus) numbers start to skyrocket again ... is it going to be a knee-jerk reaction, close down bars? Or is he (Abbott) going to say anybody that serves alcohol shut down?

“So, I’m kind of looking with us having the food and beverage now, if Applebee’s is open, we should be able to be open.”

Business has been slow, so far. The income and the people are not coming in as they were before.

Keller said Thursday that on a good month pre-coronavirus, income could be as high as $180,000. Since re-opening, income for October is on pace to be around $6,000, much of which will go back toward bills.

Keller said Tuesday that he would be careful to use the word “optimistic” about things getting to where they were prior to the pandemic.

Keller was not shy about his words and views on Abbott’s decision to close bars and not deem veteran service organizations as essential.

He said the thing that “ticked” him off the most was that football stadiums could re-open at 50% capacity prior to veteran service organizations.

Keller said Thursday that Abbott’s message with that decision was clear, using phrases such as “Go football, f--- the vets,” and “Hook ‘em Horns, but f--- the vets.”

The VFW offers services to veterans and their families, such as informing them of benefits they have with the Department of Veterans Affairs, having service officers at the posts who can better direct veterans to programs and services that could benefit them, legislative advocacy, community service and scholarships.

Many posts also rent their space out to different groups and organizations for various events.

They also serve meals to the homeless on Thanksgiving and Christmas.

“I’m glad the governor, you know, changed his position, as well as Judge Blackburn,” Williams said Tuesday. “We’re going to still take all our COVID protocols.”

‘It’s about being brothers’

John Rodgers, a member of the post, purchased a drink and a bag of chips from the canteen Thursday afternoon.

He said his father paid his first year’s dues to the American Legion in the last year of his life, and that set him on his way to membership in veteran service organizations.

Now, Rodgers said he is a member of more than half a dozen organizations.

“It’s about being brothers,” he said. “That’s what it’s all about.”

Rodgers served for just over two years in the military and served in the Gulf War.

He described the closure of the VFW, and other veteran service organizations, as a “hardship.”