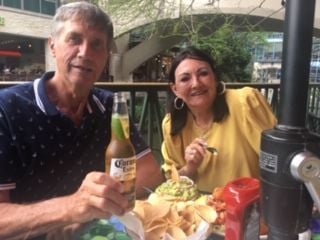 Anna Trollip, and her father-in-law Kevin Crossman both contracted COVID-19 after being tested last week in Temple. Crossman, along with his wife, arrived March 12 in Austin after coming from his native South Africa to spend time with Trollip and her family in Temple. 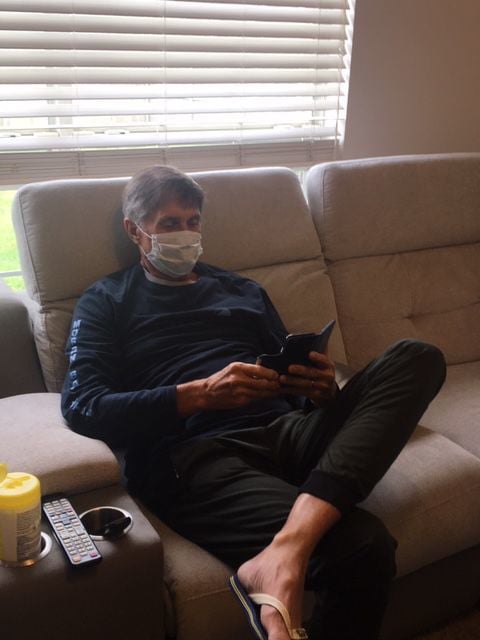 Kevin Crossman, 66, of South Africa, arrived March 12 in Austin to visit family members in Temple. He and his daughter-in-law Anna Trollip are quarantined after both were diagnosed with COVID-19.

Anna Trollip, and her father-in-law Kevin Crossman both contracted COVID-19 after being tested last week in Temple. Crossman, along with his wife, arrived March 12 in Austin after coming from his native South Africa to spend time with Trollip and her family in Temple.

Kevin Crossman, 66, of South Africa, arrived March 12 in Austin to visit family members in Temple. He and his daughter-in-law Anna Trollip are quarantined after both were diagnosed with COVID-19.

When Anna Trollip’s father-in-law developed a sore throat and dry cough last week, she thought he might have the flu.

It was days later that Trollip learned she and her father-in-law Kevin Crossman both tested positive for COVID-19 — and began spending each day in self-quarantine.

Trollip, 51, and her family had planned to spend the week getting to know Crossman, 66, and her mother-in-law, who both traveled from South Africa. The trip had been planned for a year.

Crossman and his wife flew into Austin on March 12. He was diagnosed with Bell County’s third confirmed case on March 16, followed by Trollip the next day.

“We are doing OK, (the sickness comes) in waves,” Trollip said. “Some times of the day we are feeling a little better and stronger, and then other parts of the day not so much and it just kind of fluctuates. My greatest discomfort has been the headaches and the body aches.”

Trollip said the trip was to be the first time the Crossmans had seen her family since they immigrated to the United States 20 years ago. The trip was supposed to align with spring break and her husband’s 50th birthday.

Trollip said she and her family planned to show her in-laws some of Texas, introduce them to friends and take them to services at Bethel Church in Temple.

When Crossman developed flu-like symptoms, Trollip decided to take him to Baylor Scott & White Medical Center-Temple so he could be started on Tamiflu. Trollip said she started to get concerned when Crossman’s flu test, strep test and x-ray came back negative.

After learning they had contracted COVID-19, Trollip said she informed others she came in contact with, which included a cancer survivor and another who is immuno-compromised.

“So far we are thankful that our direct contacts have not shown any symptoms,” Trollip said. “Because that also weighs heavy on your heart for the people you unknowingly exposed.”

Staying socially distant has become a challenge for Trollip and Crossman since the two of them are quarantined separately in a house with three non-infected people.

Trollip, who works part time as a labs teacher at Providence Preparatory School in Belton, said her daughter frequently stays in her own room now to avoid contact while she and her father-in-law wear face masks and gloves in another part of the house.

Trollip said they get their temperatures checked twice a day, though they have never had a fever as part of their symptoms.

Trollip said members of Bethel Church and the Providence school community have been helping them out. Members have delivered groceries and home-cooked meals to the family every day, and plan to keep a schedule until April 4.

“Uncertain of when we will test negative and when our quarantine period will be over for all five of us, we are settling in with live-stream church, Netflix and good old-fashioned Playdough for the foreseeable future,” Trollip said.

“This is certainly a vacation that will not soon be forgotten.”