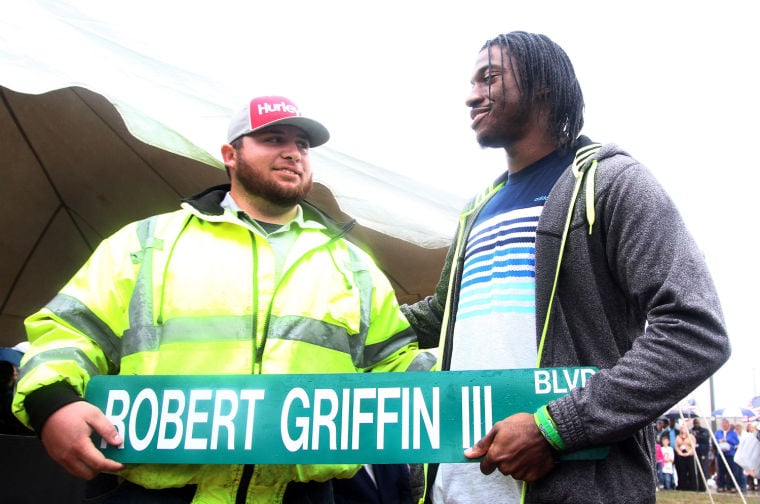 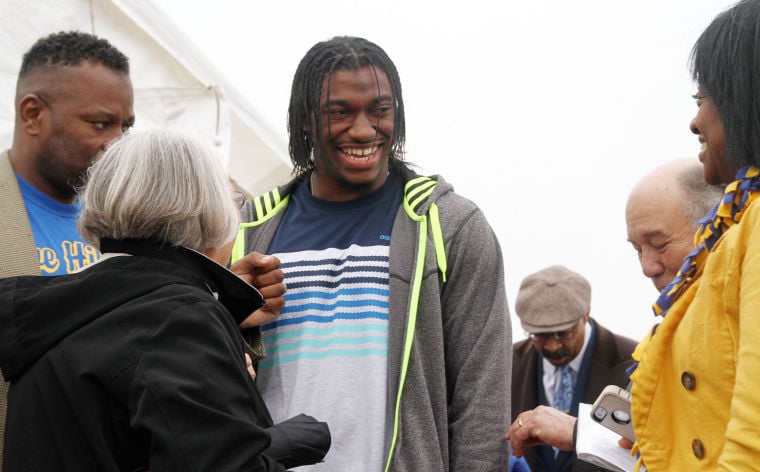 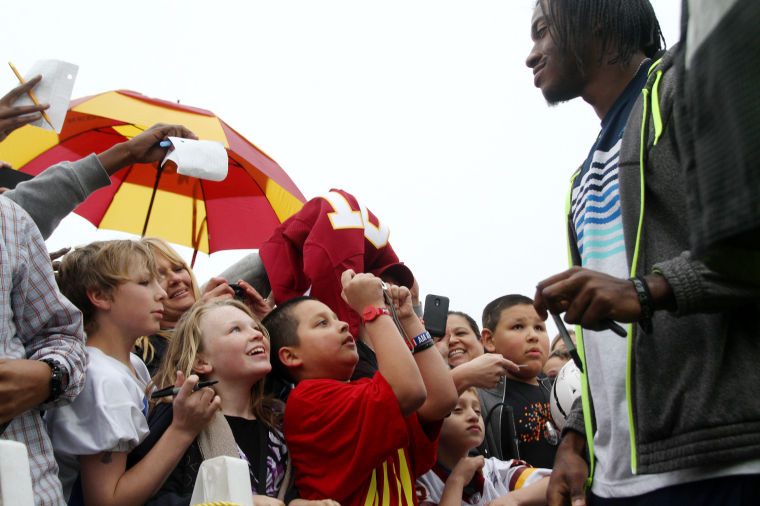 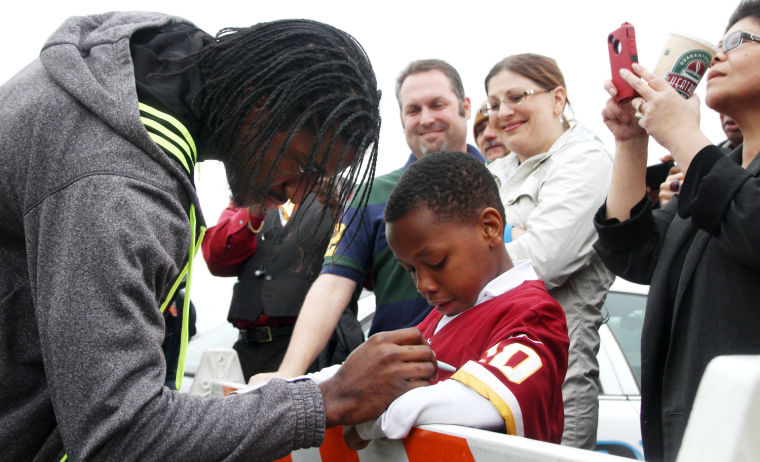 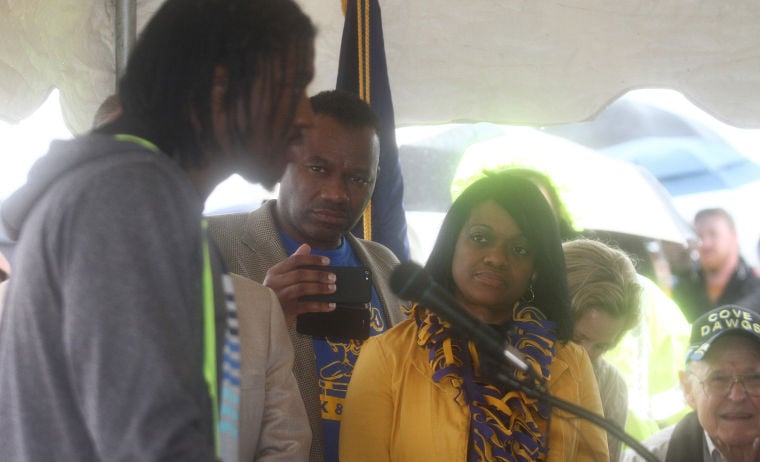 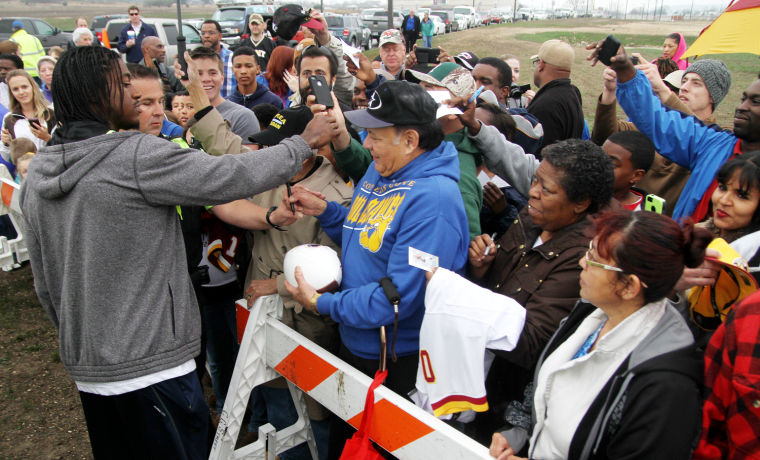 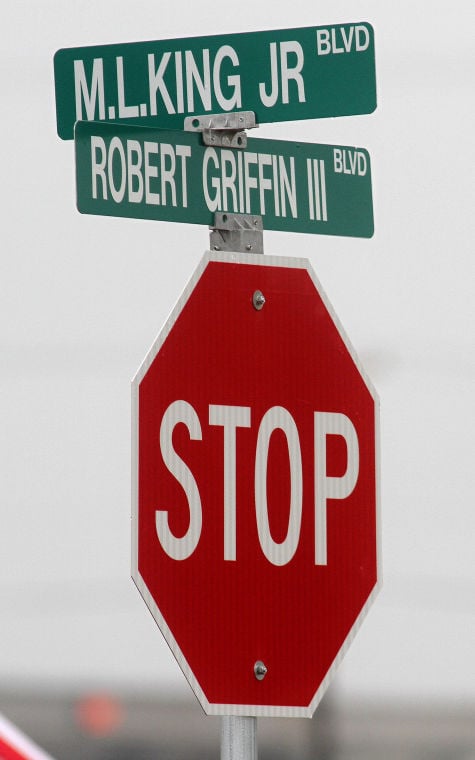 Today, the Washington Redskins quarterback officially has his own stretch of concrete to run on whenever he sees fit — so long as he’s not breaking the speed limit.

“I don’t think any kid dreams at night that he’s going to have a street named after him, but it’s truly an honor,” Griffin said at Friday’s dedication ceremony. “It’s extremely cool. ... When they come to you and tell you they want to honor you like this, it lets you know how much you mean to the city.

“Hopefully in the future they’ll talk to me about setting the speed limit, and of course, that’ll be really fast,” he said.

The Heisman Trophy winner returned to his hometown for the first time since July for the official unveiling of Robert Griffin III Boulevard.

The approximately ¾-mile stretch of road connects U.S. Highway 190 with Old Copperas Cove Road and intersects with Martin Luther King Jr. Boulevard at the Five Hills shopping center. It will continue into the future Narrows Business and Technology Park, which is expected to begin construction later this year.

“That’s the ultimate honor. If you’re going to have a street named after you, you want it to be a good street,” Griffin said. “It’s just an honor to be connected with Martin Luther King, a guy that didn’t just affect my life, but everybody’s life.”

“Robert put Copperas Cove on the map,” Yancy said. “For the people of Copperas Cove, we’re just busting at the seams with pride for all his accomplishments and so many more things yet to come. He’s just getting started.”

Yancy said there was never any hesitation in permanently honoring Griffin, who is only 23 and just a year into his NFL career, with his own street.

“You always take a chance with something like this that they might stray off the beaten path and then you live to regret it,” Yancy said. “But that won’t happen with Robert, and that’s a testament to his upbringing, his work ethic and his faith.”

About 500 fans weathered wet and rainy conditions to catch a glimpse of the local hero.

“He’s a great guy, he’s a role model. It’s like I tell my son, if you’re going to be like somebody, be like Robert Griffin,” said Tylerton Joseph, 45, a 16-year resident of Cove who stayed until the very end with his 9-year-old son, Tyshon, seeking an autograph from Griffin. “It’s good that he comes back so people know he hasn’t forgotten where he comes from, and that’s the most important part.”

Before being drafted by the Redskins as the second-overall player in April’s NFL Draft, and before resurrecting the Baylor University football program, Griffin led the Bulldawgs football team to back-to-back Division I-4A state championship games in 2006 and 2007 — the only two appearances in school history.

He also helped the track team secure its only state title as a junior, winning gold medals in the 110- and 300-meter hurdles in 2007.

As a rookie, Griffin led the Redskins to their first division title since 1999. On Friday, Griffin confirmed reports by team surgeon Dr. James Andrews that he was ahead of schedule with rehab following knee surgery to repair a torn right ACL — his second in that knee. He was injured Jan. 6 in a playoff game against the Seattle Seahawks.

“This is true. The knee is the knee, it’ll be ready — you saw the commercial,” Griffin said, referring to his new Adidas commercial featuring the slogan “All In for Week 1.”

The people of the Ft Hood area have a winner in RG3,Someone they can be proud of not only because of his power on the football field, but his power to influence the young people.
It must have been an awesome honor to have his name placed beside Martin Luther King's. It looks good anyway.
When I am ask by football fans who are from out of state,and once its known I live close to RG's Copperas Cove,Tx. 'Whats he like'
I always answer, as far as I know, Everybody likes Robert.
Young kids can learn from him.
Keep up the attitude RG and you'll always be a winner.