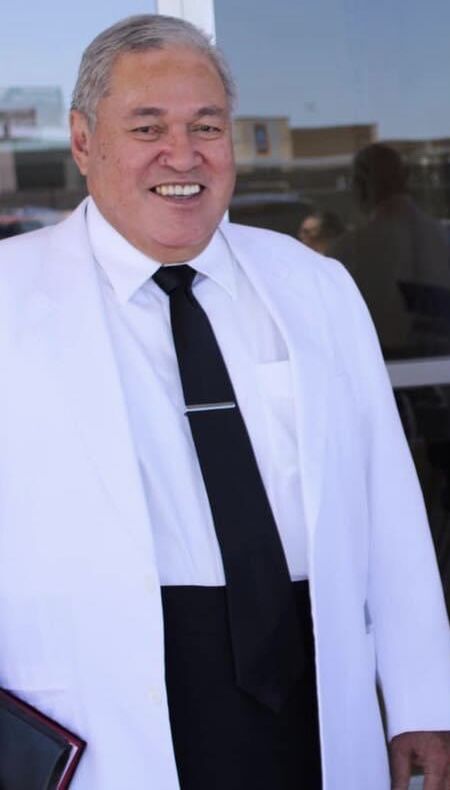 Born while his parents were pastors in Afono, American Samoa, Reverend Menise Sasa was the 8th of 9 children born to Reverend Sasa Panapa of Sato’alepai and Avao, Savaii and Mrs. Nanavale Ta’ase of Aoa and Amouli, American Samoa. His parents were later called to pastor in the village of Saipipi on the island of Savaii but due to health issues as an infant, he was adopted by his Aunt Ianeta and Uncle Saroa Mataio who were serving as pastors to the congregation in Papauta College on the island of Upolu. Papauta provided access to hospitals and schools and Reverend Sasa grew up surrounded with a slew of cousins whom he affectionately referred to as his brothers and sisters.

Reverend Sasa had a colorful youth where he dropped out of school as a teenager and pursued many entrepreneurial pursuits that included opening a bar on the beach, a small shop deep in the jungles of Savaii selling supplies to the people from remote villages, and touring Savaii as part of a three man band with his cousin/brothers primarily singing cover songs by Elvis Presly, The Beatles, and Samoan Love Tunes.

After failing spectacularly as a remote village businessman, he decided his best bet was to go back to school. He moved to American Samoa and re-enrolled at Samoana High School. Upon graduation, Menise worked at the Intercontinental Hotel as a night auditor – there a young Miss Fa’avaefou Sunia would dinner with large groups of her girlfriends and send him the bill which he would begrudgingly pay. She later became his wife of 37 years.

At the tender age of 23, Reverend Sasa received the calling to serve as his father(s) did and enrolled at Malua Theological College in Malua, Samoa. His seminary class is allegedly amongst the most rambunctious to every grace the grounds of Malua. By the grace of God, Reverend Sasa graduated from Malua and furthered his education at Pacific Theological College in Fiji. His years studying abroad piqued his lifelong interest in travel.

Upon graduation from Fiji, Reverend Sasa returned his family to Fagatogo, AS and served as an assistant Pastor. They later moved to Hawaii where he worked as a day laborer. While working one day, he decided to take respite from the humidity in a recruiter’s AC office. He enlisted in the U.S. Army at the age of 30 and joked that the other soldiers in basic training called him Pops.

Reverend Sasa served as a Chaplains Assistant for two years in Ft Bliss, El Paso, while petitioning the U.S. Army to recognize and allow clergy of the Samoan Congregational Christian Church (SCCC) to serve as Chaplains. The SCCC was officially recognized by the US Army in 1983 and Reverend Sasa was promoted from the Rank of Corporal to 2nd LT as a Chaplain stationed at Ft Campbell, KY. He was proud of the fact that he was the First Ordained Samoan Chaplain in the Armed Forces, paving the way for over a dozen other Samoan Chaplains that have followed in his footsteps. He ministered to all Soldiers while also focusing on the spiritual wellbeing of Samoan Soldiers that longed to worship in their native language and conducted worship services in Fort Bliss, TX; Fort Campbell, KY; Schofield Barracks, Hawaii; Camp Casey, Korea; Fort Dix, NJ; Fort Myers, DC; and Panama to name a few.

Reverend Sasa moved his family to Fort Hood, TX where he planted a church - CCCAS, Fort Hood - which was blessed by the Elder Reverends of AS on September 25, 1993. The church later became nicknamed Samoa-iTexas because it encompassed people of different faiths who were drawn to worship together in their native language. Reverend Sasa has served the greater central Texas Samoan community for 28 years, emphasizing God’s grace for all both within and outside of the walls of a church.

Reverend Sasa’s late wife Fa’avaefou passed away in 2010 and for 4 years he ministered solo. In 2014, God answered his prayers for a ministry partner when he met and married Mali Neru of Anchorage, Alaska. With renewed strength, they happily served the Lord for the last 7 years of his life. Reverend Sasa passed into glory while she sat at his bedside holding her hand.

Reverend Menise Sasa will be sorely missed by his wife Mali Sasa, their 12 children, 14 grandchildren, the Samoa-i-Texasˆchurch, and the Greater Central Texas Community. Have a splendid reunion with the Savior, Tama. Leave the light on for us!

Offer condolences at www.chisolmsfuneral.com. Chisolm’s Family Funeral Home in KILLEEN is in charge of LOCAL arrangements.