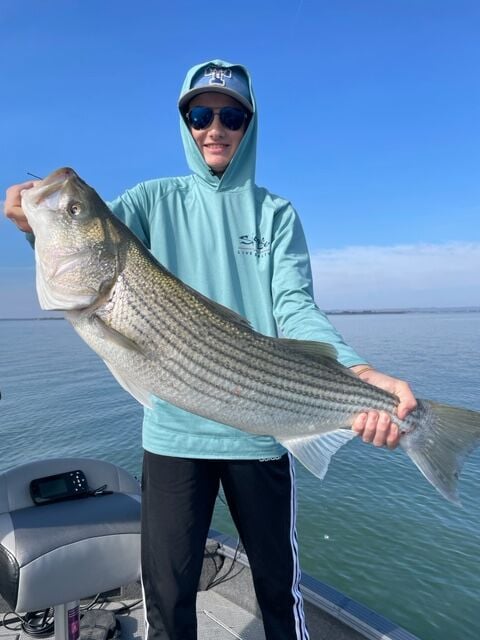 Micah Garrett proudly displays a 34-inch Lake Buchanan striped bass he landed Tuesday on an MAL Heavy Lure while fishing for white bass with his family. The fish was measured and released. 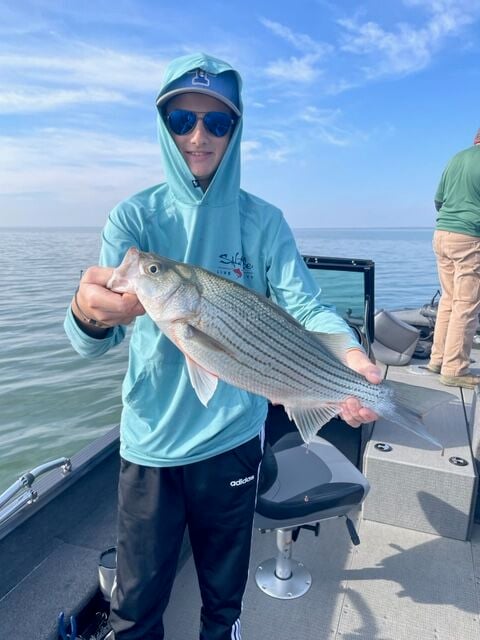 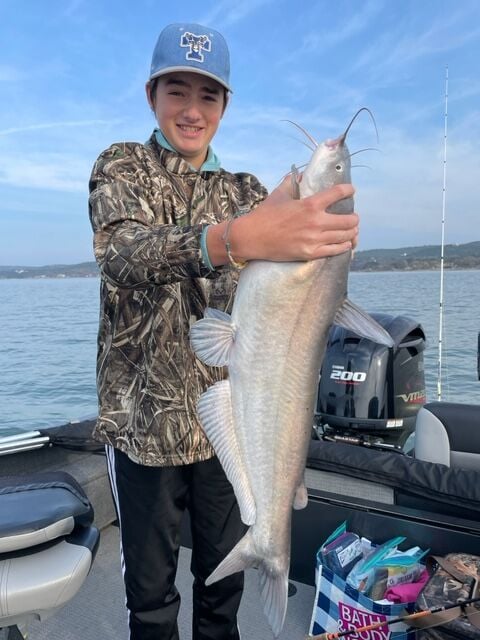 Micah Garrett proudly displays a 34-inch Lake Buchanan striped bass he landed Tuesday on an MAL Heavy Lure while fishing for white bass with his family. The fish was measured and released.

The striped bass is one of several fish in the temperate bass family, along with white bass, yellow bass, white perch and the various crosses (hybrids) of these species.

The striped bass, a native to saltwater, is an anadromous fish, which means it lives primarily in saltwater, but enters into freshwater to spawn.

Back during the dam-building era in our nation’s history, fisheries managers observed exploding populations of shad on the newly formed reservoirs. This was particularly true in the southeast and southwest parts of the country where the warmer climate limited fish kills thanks to warmer winter temperatures.

Eventually, the shad would grow so numerous they would outstrip their food supply and the population would crash, negatively impacting the populations of gamefish which relied upon shad as a food source.

Poor fishing led to economic decline for lakeside economies. This set fisheries managers into action searching for a predator fish to help stabilize shad populations by eating enough of the shad to keep their numbers in check.

Given the striped bass’ ability to survive in freshwater, experimental stocking of striped bass was attempted as a potential solution to the boom-bust cycle the shad exhibited.

Striped bass were indeed successful at gorging on shad, and they helped solve the boom-bust problem.

The cooler the waters they were stocked in, the better the striped bass did. However, in extreme southern waters (like those in Texas) striped bass did not fare quite as well.

Striped bass are not heat-tolerant fish, so when southern reservoirs stratify in the summer months, the striped bass would be squeezed into narrow horizontal bands of the reservoirs where they crammed together and survived by staying in or just above the thermocline.

Fisheries biologist realized that striped bass would only be a good fit in more expansive reservoirs which had larger volumes of water and thus more thermocline for the stripers to survive in during this summertime thermal squeeze.

Regardless, once they were stocked and grew to catchable size, striped bass drew a following among anglers, as they provided variety, and a gamefish with the potential to exceed 30 pounds. The demand for these saltwater transplants was sufficient to lead numerous states, including Texas, to continue to stock striped bass as both a shad control measure and as a desirable sportfish.

A number of large Texas reservoirs are stocked with striped bass. Perhaps the most notable is Lake Texoma.

Many do not realize we have quality populations of striped bass in two reservoirs much nearer to us than Lake Texoma. Central Texans may drive to Lake Whitney to the northwest of Waco, or to Lake Buchanan, west of Burnet, in just over an hour’s time to either one.

For those new to hunting striped bass, I would definitely suggest going with a fishing guide at first to help reduce your learning curve and quickly become familiar with the unique tactics and equipment used for these fish, as well as what parts of a reservoir these fish tend to frequent.

Those accustomed to chasing white bass using sonar will have a bit of an advantage over those more accustomed to fishing for cover-loving species like bass and crappie. This is because, like white bass, the striped bass is a pelagic fish.

Such was the case for junior angler Micah Garrett of Kerrville. While fishing this past week with his family on Lake Buchanan, the 16-year-old brought to net a trophy striped bass which fell just a half-inch shy of the Junior Angler catch-and-release lake record.

Micah said, “In the last few weeks my family and I have been fishing at Lake Buchanan. We were mainly catching white bass fishing vertically using LiveScope. Other family members were catching bonus fish such as blue catfish, hybrids and stripers. However, I never seemed to catch the bonus fish.  It became a joke in our family that I was cursed.”

He continued, “That all changed last Tuesday morning. We arrived at the lake a little late due to fog. At approximately 9:30, I hooked a fish that immediately started running. After a short fight, I landed a 12-pound blue catfish.   Then at 10:30, I hooked another fish that fought much harder than a white bass.

“Turned out to be a nice size hybrid.   Finally, at 11:30, I hooked up on what we suspected was another blue catfish.  The fish ran and it took almost five minutes to get it to the boat. Much to our surprise, the fish was a 34-inch striper.  The curse was broken!”

When asked about how he was geared up for his white bass which led to the capture of this outsized striper, Micah replied, “All my fish were caught on light spinning tackle. B ‘n’ M rod, Piscifun spinning reel and MAL Heavy lure with silver blade and chartreuse tail.”

As always, do your homework before laying down a deposit on a guided fishing trip if you decide to go that route. To keep you from reinventing the wheel, I have listed a number of questions I would suggest you ask any guide you may be considering on my website’s FAQ segment under the “About” tab at www.FishCenTex.com.

Established in 2009, the Soldiers’ Kids Involved in Fishing Fun (SKIFF) program’s purpose remains the same today as when it was founded — to p…