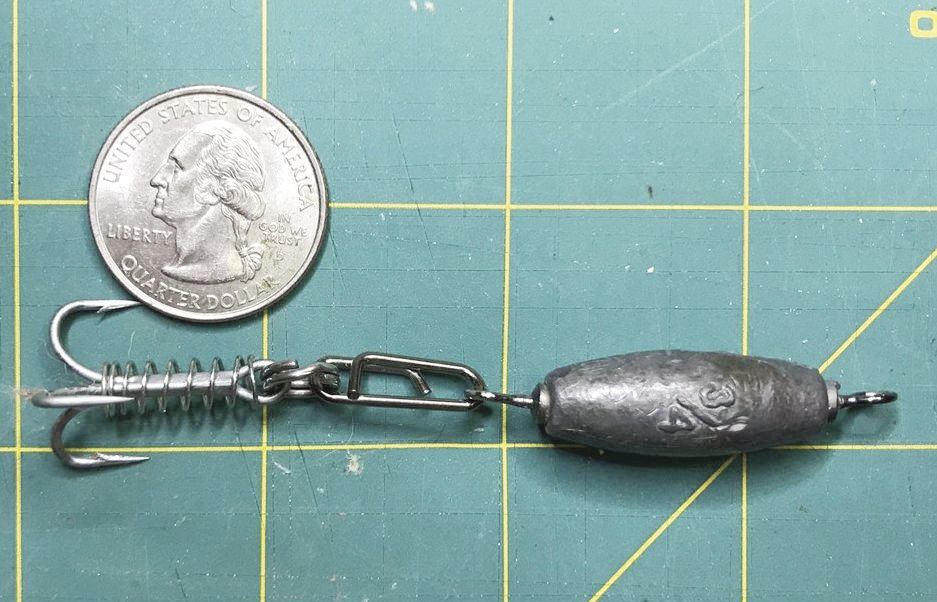 The Catfish Plumb, developed by the author for fishing vertically for catfish, features a spring to hold doughbait and a compact, effective means to tie sensitive braided fishing line directly to the presentation. 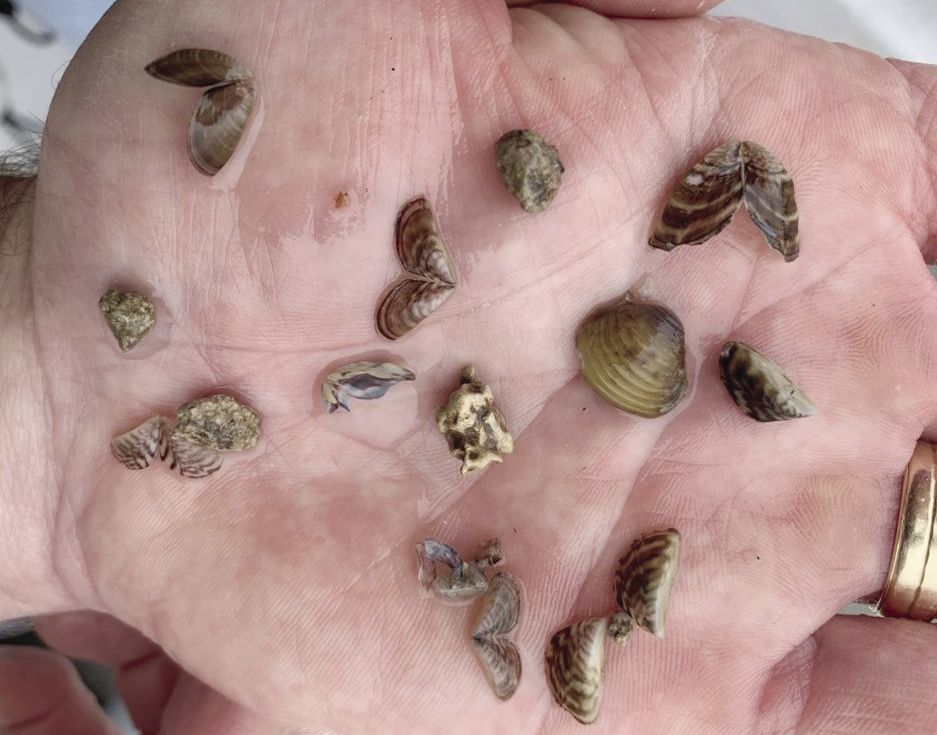 The items shown in the author's hand — zebra mussel shells, freshwater mussel shells and rocks — were all regurgitated or defecated by Belton Lake blue catfish.

The Catfish Plumb, developed by the author for fishing vertically for catfish, features a spring to hold doughbait and a compact, effective means to tie sensitive braided fishing line directly to the presentation.

The items shown in the author's hand — zebra mussel shells, freshwater mussel shells and rocks — were all regurgitated or defecated by Belton Lake blue catfish.

As with all guides choosing to comply with Gov. Greg Abbott’s closure of non-essential businesses, I have found myself with some unanticipated time on my hands during what is normally a jam-packed April fishing calendar.

In a normal year I would be netting live shad before sunrise and fishing for hybrid striped bass on Belton Lake from mid-April through the first week of June.

Since I have confidence in my ability to find and catch that species, I have decided to take a few hours each week and invest them in the pursuit of other species. The variety provides a distraction from all that is at hand with our nation’s battle against COVID-19, and the challenge to find different species of fish using tactics I do not typically employ is a challenge I welcome.

This week I set my sights on blue catfish. Of our two local lakes, Belton and Stillhouse Hollow, Belton is more well-known for both quality and quantities of blue catfish, so I began my search there.

If you follow my blog and/or Facebook page, you may recall last summer when the fishing for white bass peaked around sunrise and then again around sunset, with next to no action during the heat of the day, I put a number of clients on blue catfish consistently during my multi-species trips.

At that time, the blue catfish were suspended above the thermocline feeding on shad. I found them using sonar, then hovered atop them with Spot-Lock technology, and fished vertically for them.

This past Thursday and Friday I picked up where I left off in mid-October of last year, trying to reconnect with Belton’s blue catfish.

I invited along two friends, Jim Mobley and Max Lopez, both of Harker Heights. Mobley recently invited me along to do some local flyfishing, and Lopez helped me out with a trailer-bearing repair some time ago, and so I thought this might be a nice way to return the favors.

Due to the cold nights we experienced Monday through Thursday, and the abundant fresh water that filled both reservoirs to above full pool resulting from Easter Sunday’s rains, I opted to start my search in deep water ranging from 34 to 46 feet.

I relied on Humminbird side-imaging to find loosely grouped blue catfish, then observed the wind and positioned the boat just upwind from the center-of-mass of the bottom-hugging blue catfish.

Once the boat was in position, we chummed the area with range cubes to stimulate the catfish and draw them in closer to us, then we got our baits in the water.

I also placed range cubes in a chum sack and lowered the sack down to about 2-3 feet off bottom using one of my downriggers. The gentle wave action kept the sack in motion, allowing a slow feed of dissolving range cubes to emit from the sack.

Mobley and I agreed ahead of time that we would use this trip as a means to compare and contrast various baits. He used a blood-flavored doughbait produced by Danny King, while I tried Catfish Bubblegum, fresh dead shad, frozen shad and my own no-stink doughbait.

When all was said and done, all of the baits caught fish, and it seemed like one bait would be “hot” for a spell, then another would find favor — no real trend developed, but I am going to keep good statistics and see if any trends emerge.

After much experimentation last fall, the means by which Lopez and I presented our baits was via a weighted treble hook I designed specifically for fishing with doughbait (see photo).

Fashioned from a 3/4-ounce sinker, a metallic clip, a split-ring, a treble hook,and a spring (to hold the bait well by increasing surface area for the doughbait to grip into), this simple rig is designed to be tied directly to sensitive braided line.

The clip and split ring give just enough slack for catfish to mouth the bait and begin to move off with it, but not quite enough slack to keep a light bite and/or a small fish from being detected.

Last fall I observed that bite detection was a big challenge for less experienced anglers. Catfish do not often move horizontally with a bait; more often, they suck a bait in and do not move at all. This results in a barely perceptible change of pressure on the rod which an angler really must focus on to detect.

Other times, catfish will move a short distance vertically upward with a bait. In this case, the rod tip, which was previously bowed slightly downward under the weight of the bait, actually straightens out as the fish relieves that pressure.

Both of these observations led me to develop a system wherein braid could be used to tie directly to the presentation, and where little “leash” was given to the fish to move off with the bait.

I now have these “Catfish Plumbs” on my website — HoldingTheLineGuideService.com. I mention this because although it would be simple enough for any angler to make his or her own version of these, I have found that getting components for many items we anglers have taken for granted is getting increasingly difficult as the supply chain has been disrupted by recent events.

On Thursday, Mobley, Lopez, and I fished about 5 hours and landed a total of 58 fish which included primarily blue catfish, with a few white bass thrown in after we found a nice school of them as we searched for blue catfish.

Clients or no clients, I just could not pass up fishing the pre-frontal conditions we enjoyed briefly late Friday morning. On that day, my wife, Rebecca, and I headed back out to Belton Lake and, with a few refinements made to our approach based on my experience on Thursday, put another 32 catfish in the boat, with most of the action packed in the hour prior to the winds going calm in advance of the start of the north wind that ushered in the cold front now chilling us this weekend.

One of the adjustments I made from Thursday to Friday was based on a recommendation from Mobley about de-barbing the treble hooks used for catfishing. I observed that the time and effort Mobley expended on extracting the hook points from the catfish he landed was typically less than my own expenditure.

I simply pressed down the barbs with a rigid pair of forceps. Instead of barbs, there are now bumps where the pressed-down barbs lay against the hook’s tines.

From one point on in Thursday’s trip, and for the entirety of the trip on Friday, I used Garmin LiveScope to observe fish response to our baits. LiveScope made it clear these blue catfish were just about glued to the bottom nearly all the time. This was in stark contrast with fish positioning from August through mid-October.

Seeing this, we attempted to position our baits less than 6 to 8 inches off bottom and hold them there until a strike occurred. Due to the soft nature of the doughbaits we used, we typically reeled up and rebaited if we set the hook and missed a fish on the hookset.

We used medium-light spinning rods and reels to present our baits, as the majority of the fish taken via this method are “eater”-sized catfish, running from the legal minimum length of 12 inches, up to about 16 inches.

The typical pattern we experienced was that the fishing started off slowly, picked up as the scent of the chum and bait permeated the area, stayed steady for 15-20 minutes, then slacked off. We speculated that during those peak 15-20 minutes most of the fish in the vicinity had made their way to the source of the odor and struck our baits if they were going to do so. The slackening of activity signaled that we had tempted all of the fish in that immediate area, and that it was now time to move on.

BOB MAINDELLE: The squeaky wheel gets the grease

How many times, as a lover of the outdoors, have you held some outdoorsy piece of gear in your hands and thought, “This works pretty well, but…