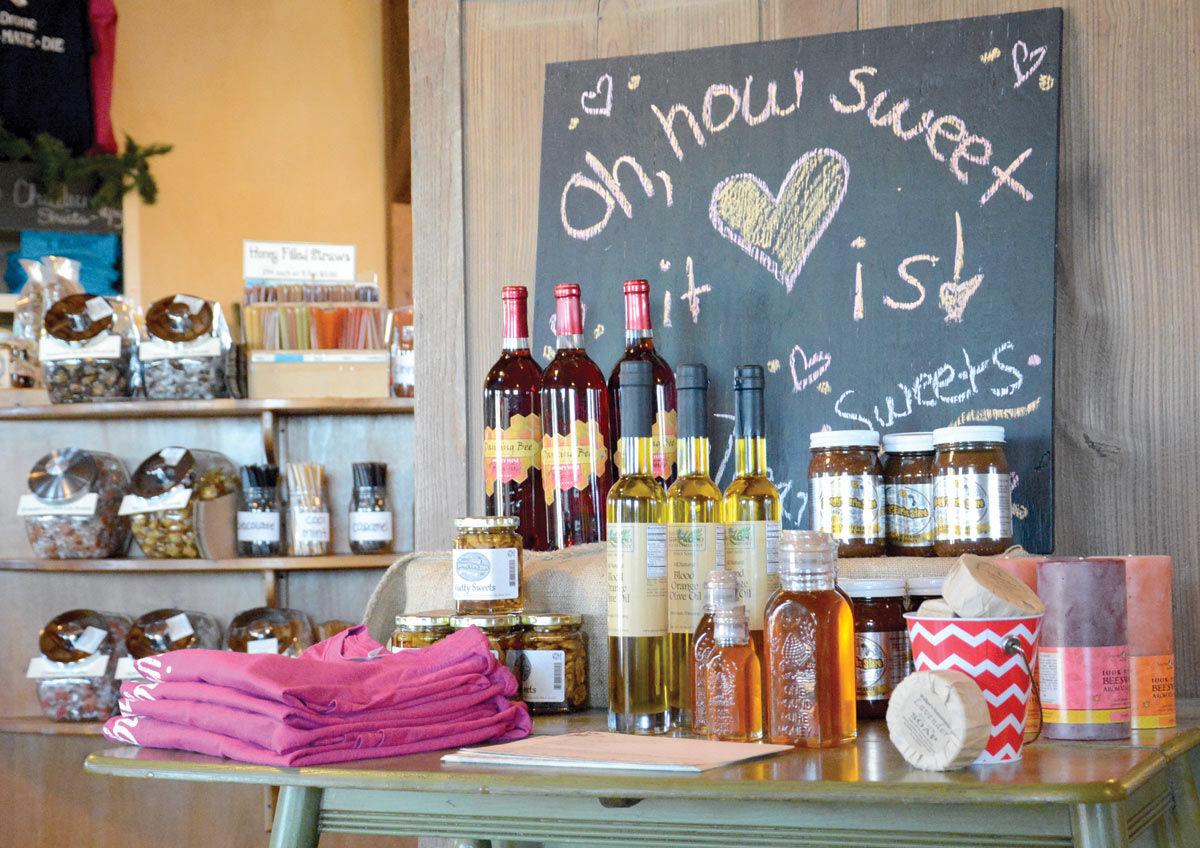 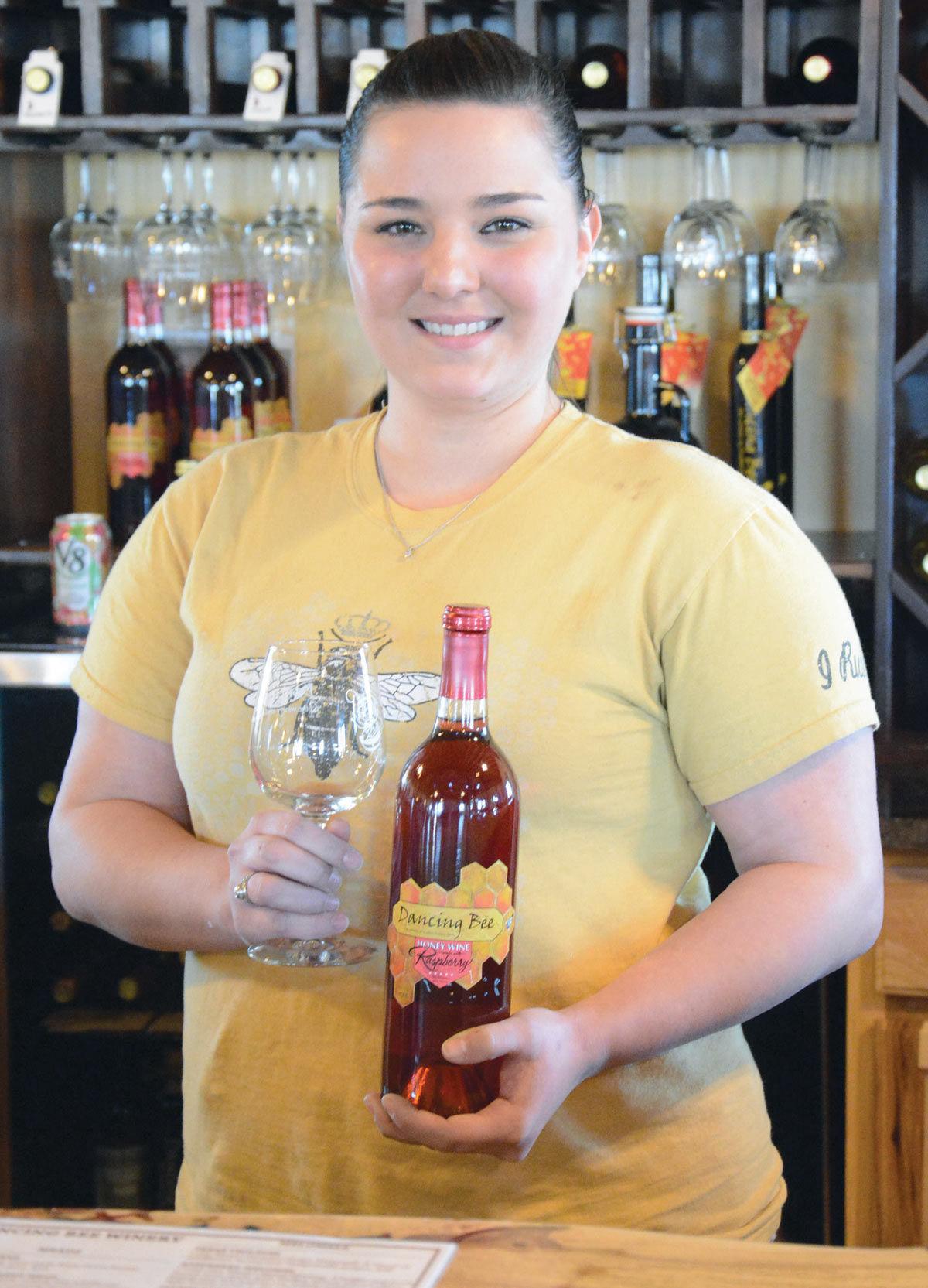 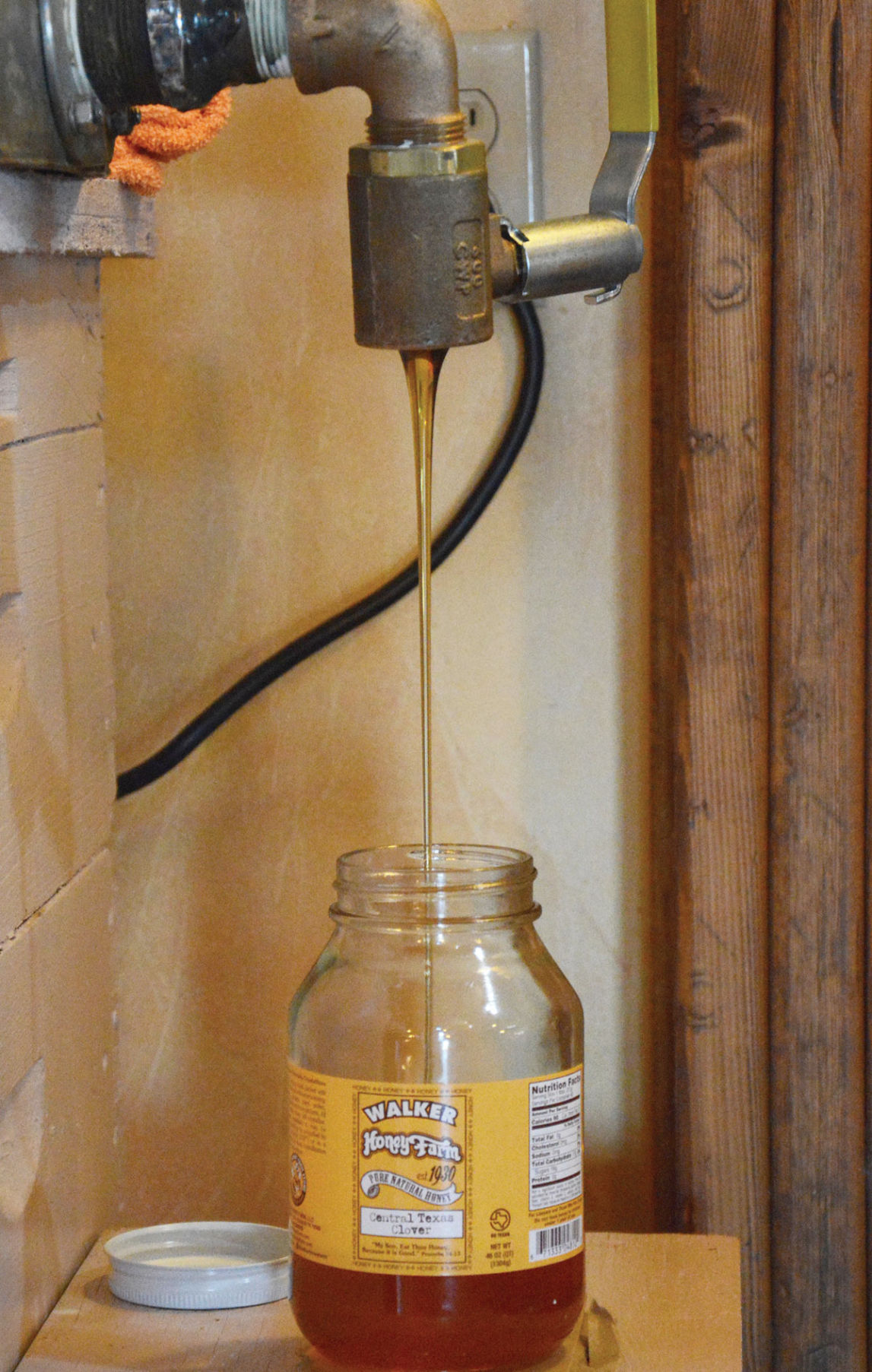 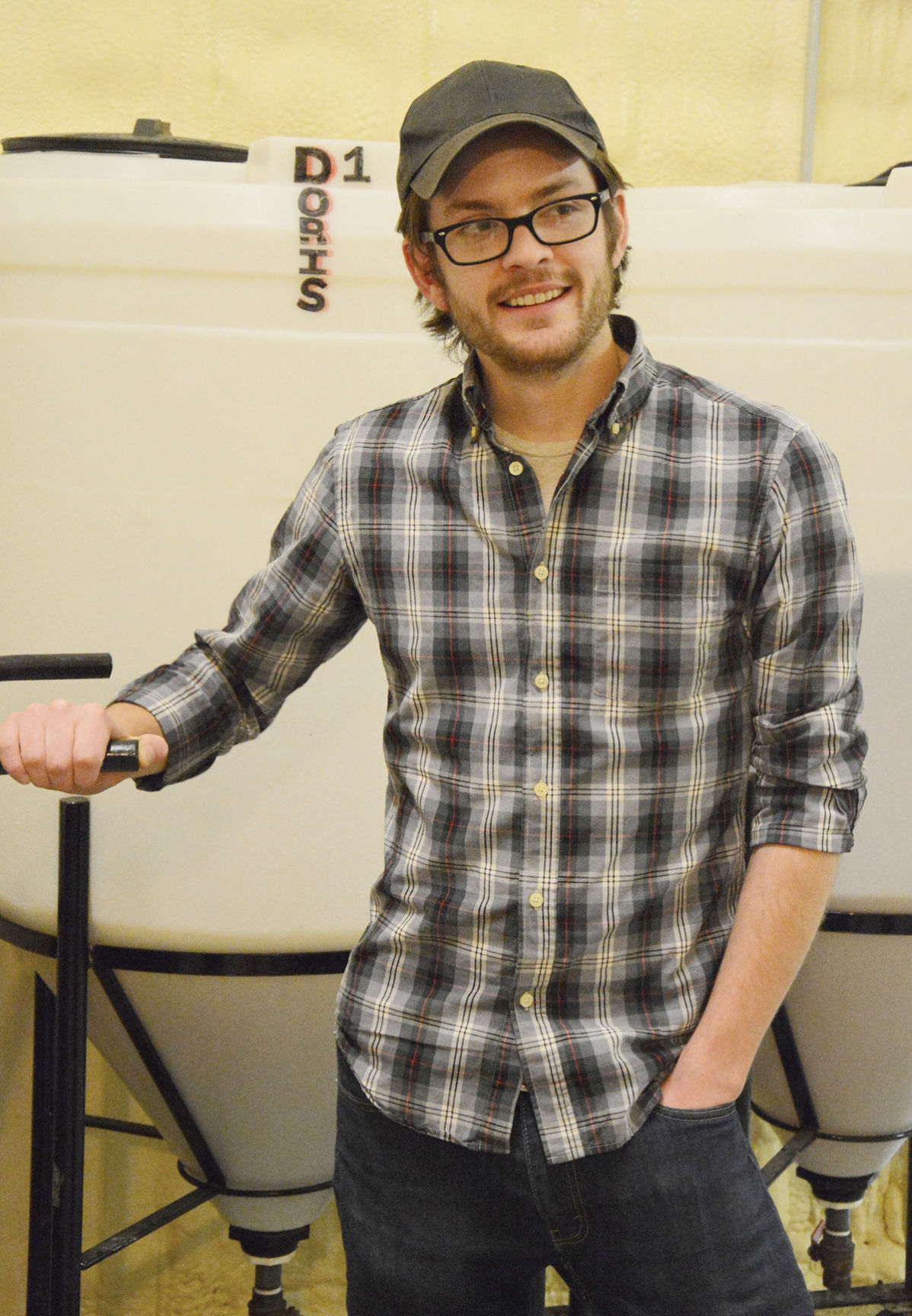 On an unseasonably warm, bright day in February, Jonathan Walker, a beekeeper at Walker Honey Farm, holds out an active, open bee hive for inspection with ungloved hands.

Thousands of bees crawl industriously, carrying out their various functions while swarming around one large bee with a bright green dot on her thorax. The queen bee, so marked by her keepers, weaves in and out of the swarm, laying eggs at random while curious onlookers observe. Worker bees carry bright red and yellow pollen on their tiny legs, ready to pack the honeycomb with progress. A hive cell, dormant just seconds before, begins caving in as a new bee gradually pokes through and emerges into the open air. The bees, heedless of their human bystanders, continue life as they know it, all the while suspended aloft for a closer examination. Their headway in the most unlikely of circumstances is a microcosm of the environment at Walker Honey Farm itself.

At first glance, the property at Walker Honey Farm in the small town of Rogers lies dormant, two lone buildings and a bright red food truck against the wind. A bare gridwork of stakes and trellises covers an acre, sheltering plant roots in the dark earth.

Entering the Walker Honey Farm Store, the Spartan outdoor façade gives way to an entirely different atmosphere. Inside, the scent of honey permeates the air, complementing golden-colored walls and cheerful artwork of dancing bees. The store houses an amalgam of good things, with a mead and wine-tasting bar on one side and a honey-tasting stand on the other. In the back lie giant barrels of honey for those who bring in their own bottles to refill.

A “kegerator,” the store’s newest offering, houses the most popular meads on tap with large “growler” bottles on hand to take home a favorite drink. Handcrafted offerings of soap and candles made on the farm lie next to homemade honey granola, while the front counter boasts fresh bread made in the brick oven pizza truck on site. There’s a sense of energy and excitement about the place — this is no sleepy little store, but a living, growing operation.

Chelsea Clifton, marketing and retail manager, greets customers with a cheerful “hello.” Clifton, who began with Walker Honey Farm after graduating from the University of Mary Hardin-Baylor in 2011, came into the business the old-fashioned way.

While most job searches today are conducted online, Clifton boldly popped her head into owner and manager Clint Walker III’s office and announced that she needed a job. Walker, while initially reluctant, soon realized Clifton’s skills were exactly what he needed for his growing business.

Having recently created the separate Dancing Bee Winery next door to the store, he needed someone to market his newest venture.

“I love the people and getting to use my skills,” said Clifton, now several years into her role. “I give input and suggestions, and have room to experiment.”

“If you hire good people, they make a good product,” agreed Walker. “Most of our staff are in their 20s; every person here is smart, creative and into the thought process behind things. Their energy keeps us current and fresh.”

This synergy of shared ideas among the staff spills over into the Dancing Bee Winery, where young mead maker and vintner Chase Cohagan gives customers tours of his work. Cohagan, who also serves as a beekeeper on site when not making mead and wine, generously pours out samples of mead. When asked why he chose his profession at such a young age, he replied, “It’s awesome! I’m making the oldest alcoholic drink in human history—I’m carrying a torch ‘from bee to bottle.’”

Cohagan proudly displays vats of mead wine at various stages of maturity. He has given each vat nicknames such as “Doris, Judy and Betty,” revealing an undercurrent of humor that runs through the whole operation. This humor is easy to see on the labels of several unique mead wine varieties, such as “Logi’s Libation,” a blend of smoky chipotle peppers and honey that goes down smooth and lingers spicy on the palate. Logi, the Norse god of fire, is pictured surrounded by bees and holding a jar of honey while lava and flames erupt from a honeycomb volcano behind him.

“Traditional mead dates back thousands of years, all the way back to Beowulf and Bavaria,” said Walker. It is made by the same process as grape wine: honey and yeast are mixed together; the yeast feeds on the sugar from the honey and ferments, producing alcohol.

As with grape wine, mead can be made into endless varieties and flavors. Unlike grape wine, it ages rapidly, within six months to one year. It can keep for any number of years, though the flavor is fixed within the first year. Along with traditional mead, the winery also produces melomel varieties containing fruit infusions, metheglin varieties containing spices or hops and pyments, varieties that contain grapes.

Currently Cohagan is experimenting with “session mead,” a variety with lower alcohol content and no sulfates, similar to a wine cooler. Nicknamed “Chase’s Baby” by Walker’s wife Janice, Cohagan is slowly refining his session mead through several batches.

His efforts mirror that of the Dancing Bee Winery itself. The bare stakes and trellises on the property do indeed hold young grapevines just planted last year, due to push through the ground in another season. From the time they crop up, the vines will need another two years before they will produce grapes, and another couple seasons following before they can be used in mead winemaking. Though still growing, the vineyard is another example of life stirring just beneath the surface at the farm.

Initially, the sting of the bees was enough for Walker to decide that he did not want to follow in his father and grandfather’s footsteps. He left the farm in his youth, married his wife, Janice, and together, they had two boys.

While grateful for the new life he had, the honey had already seeped into his soul. He decided to return to the life he knew to give his young boys the experience of growing up the way he did.

“Besides marrying my wife (CFO and ‘Queen Bee’ of the business), coming back to honey farming was the best decision I ever made,” he said. “I’m an amateur botanist and bird watcher, and this business allows me to pursue my interests. I feel very fortunate to work in a business that gives me this much pleasure.”

Walker’s pleasure is evident in his eyes, which twinkle when he talks about his honey, often with a little smile on his face. The farm produces multiple varieties of honey on site and also brings in small-batch varieties from other honey farmers throughout Texas.

The honey ranges from a light wildflower honey to a deep amber buckwheat honey. The flavors of unique honey such as the smoky huajillo honey and the rare pecan honeydew make honey tasting a truly original experience. “I don’t know of any other location in Texas where customers can taste 10 different types of honey in the same place,” Walker proudly said.

While Walker went on to describe the multiple benefits of eating raw honey, a regular customer from Houston stopped in for his bi-monthly visit to pick up six gallons of honey. Many customers driving between Houston and Lubbock also make it a tradition to spend an afternoon at the farm and winery. “Elderly customers from Temple often drop off their empty jars for filling, complete their medical appointments at Scott & White Hospital, and come back for their honey and the conversation,” added Clifton.

“We have a relationship with our customers,” Walker said. “Everyone has a story.”